Our Most Anticipated Games of E3: Bioshock Infinite 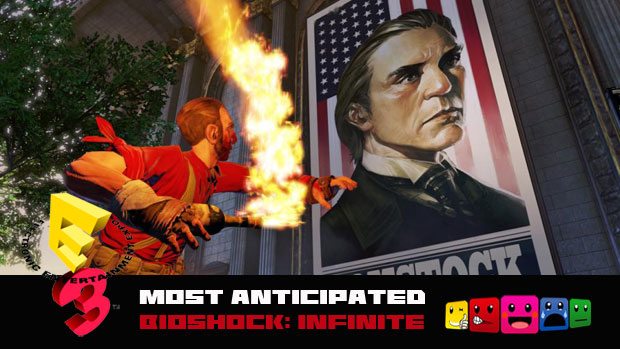 Irrational Games shocked the gaming community when they revealed Bioshock Infinite last year.  The original minds behind what may go down as the most influential game this generation, Bioshock, announced that they had more to offer from the world.  One major difference jumped out right away at those that had prepared themselves for first look at the game, there was no water.  In fact, it was as far away from water as you could possibly get, Bioshock: Infinite was set in the sky.

Aside from the name, it’s hard to pin down how exactly these games are related to one another.  Not much has been revealed about this mysterious title.  Though recently there have been some similarities drawn to the original game in the first person mechanics, and the scavenging of your surroundings for munitions in your fights, but that’s where most of the comparisons stop.  The monarchy that was Rapture, is something quite different on Columbia.  There will be multiple factions vying for power, The Founders, led by Comstock, and the Vox Populi who is a workers rights movement gone completly awry.

Elizabeth, who was briefly shown in the short teaser for the game, draws a special power from tears.  Tears that rip holes in space and time transporting you to alternate realities, or tears that can provide assistance in a time of need.  There’s still plenty of questions surrounding the game, and given that Bioshock: Infinite isn’t due until 2012, we might be waiting for some time more to get all of those answers.   But with E3 2011 just around the corner, we’re likely to learn something about about one our most anticipated games of 2012.

What mysteries about the game will unfold at E3?  We don’t know.  That’s why we’re excited.

Home / E3 / Our Most Anticipated Games of E3: Bioshock Infinite