Our Most Anticipated Games of E3: Elder Scrolls V: Skyrim 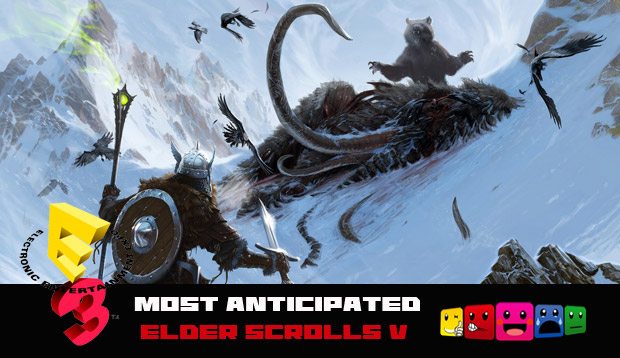 I think I can speak for most gamers when they say they are looking forward to Elder Scrolls V.  E3 will mark the first look at the game for many journalists that attend gaming’s biggest show of the year in Los Angeles this June 6th-9th, and with the extensive coverage of the show from sites across the web (us included), the hype surrounding the game is sure be at an all time high after the event.

Confirming the rumors to be true, Bethesda announced Skyrim at the Spike Video Game Awards back in December.  Since then, information had come in sparsely about the game until Game Informer blew the doors off of the title with their exclusive preview of the game.  Once information started going public, Elder Scrolls V: Skyrim hype has boomed to epic proportions, and rightly so.  The game is set to offer fans of the franchise, a brand new game engine to galavant in, and this is something that fans have been waiting on for quite some time.

And while the new engine will be the back-bone of the gameplay mechanics, the new features in Elder Scrolls V are what’s really getting gamers excited for this RPG.  From what we’ve seen so far, it looks like Bethesda has really gone over the traditional gameplay mechanics of the franchise and made the neccessary changes that give gamers both what they want, and what the franchise needs to be relevant in 2011.

The lore is long and deep in the Elder Scrolls franchise.  Skyrim is no exception.  While the Septims may have been front and center in Oblivion in your quest to close the Oblivion gates, this time around The Dragonborn take center stage.  Instead of the demons which populated Oblivion, you’ll be fighting dragons who have now infested the world of Skyrim, with the mother of all dragons on its way, Alduin.  Revolving around the cleansing of these dragons from the land of Skyrim, they’ll play a huge part in the level progression of your character.  These three word phrases will function as powerful spells that will aid you in battle and offer you a whole new level of power that hasn’t been seen before in an Elder Scrolls game.

If just to see the new engine in action, and Dragonborn storyline unfold,  Elder Scrolls V: Skyrim is one of our most anticipated titles that will be at E3 2011.

What do you think?  Are you excited to hear more about Elder Scrolls V: Skyrim?  What games are you excited for? Or wish were revealed at E3 2011.  Let us know in the comments section below.