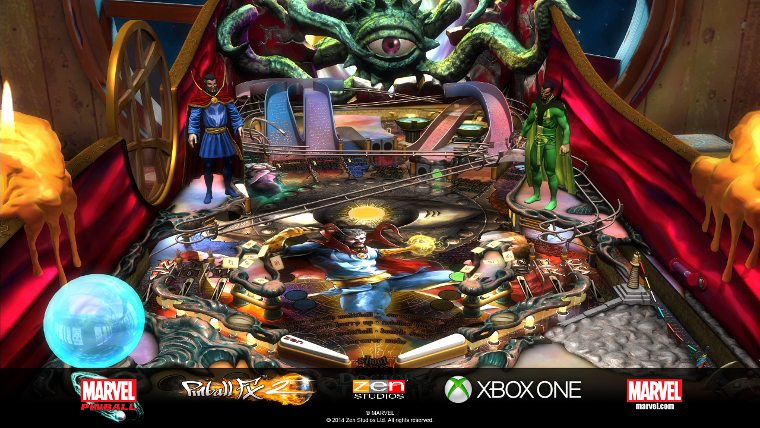 Ahh, the days of Pinball machines in the old arcades… are even before my time. Those arcades had some pinball but were primarily filled with arcade machines when I visited them as a teenager, and we had cool things like all night lock-ins where we would pay $5 each and spend 12 hours playing whatever we wanted with a group of mates throughout the night. Those were the days! Now you young whipper-snappers, or old fogies like me can enjoy that Pinball feeling from the comfort of our own loungechairs, in Full High Definition with Pinball FX2 now available for download on the Xbox One.

If you are new to Pinball FX2, the game itself is free, with you having the option to buy individual tables from $2.49 to $2.99, or table bundles for $9.99. Xbox 360 owners of Pinball FX2 rejoice, as your previously purchased tables will be automatically available for you to transfer into the Xbox One version of the game and enjoy at no extra cost. The fantasy themed Sorceror’s Lair table comes free with the game.

Pinball FX2 boasts a massive library of tables, with a great selection of designs from Zen Studios and a bunch of licensed franchises like Star Wars, Marvel, Plants vs Zombies and the soon to be released The Walking Dead table (August 28).

In a day and age where splitscreen and hot seat multiplayer seems to be almost evaporating from existence, Pinball FX2 brings a refreshing change, with plenty of gamemodes to suit those times when you’re chillin’ with your friends, or trying not to kill your siblings.

You can download Pinball FX2 now from the Xbox Games Store, or via your console’s dash.