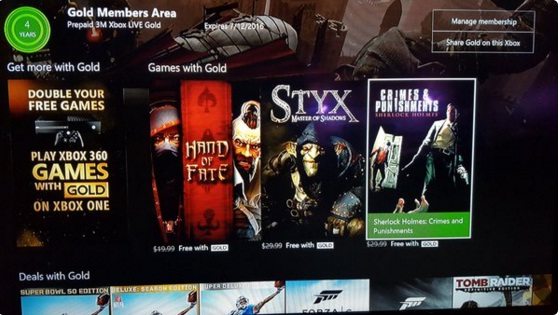 UPDATE: These games seem to have been confirmed by a new leak from Microsoft themselves.

The Xbox Live store may have inadvertently leaked one of the games that will be appearing in the Games with Gold March 2016. There is also a rumor of the whole list being revealed.

ICXM.net shared an image from a Twitter user that took a screencap from the Xbox Live store. It showed briefly that Sherlock Holmes: Crimes & Punishments could be one of the games releasing in March 2016.

An industry insider also posted what could be the full lineup of titles that will be available in the Games with Gold March 2016 promotion. This user correctly predicted lineups for September 2015 and November 2015 Games with Gold titles in the past.

Reportedly, Crimes and Punishments: Sherlock Holmes will be available for Xbox One from March 1st, 2016 until March 31st, 2016. Lords of the Fallen will be the second game available to Xbox One owners later in the month.

For Xbox 360 owners, allegedly Supreme Commander 2 will be available from March 1st until March 15th. The second game will be the first Borderlands which you will supposedly be able to download between March 16th until March 31st.

Microsoft has yet to announce the full Games with Gold March 2016 lineup so take this news as a rumor for now.