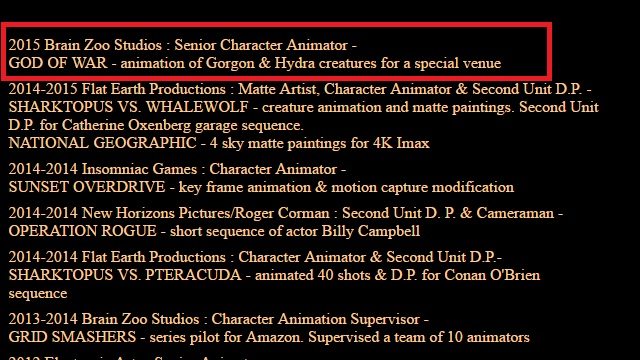 An animator has listed that he has worked on the God of War franchise as recently as the year of 2015. Does this mean a new game is in development for PS4?

As reported by Nerdleaks, a long time animator named Harry Walton listed on his resume that he worked on a recent animation for God of War in 2015.

He was the Senior Character Animator and was responsible for the “animation of Gorgon & Hydra creatures for a special venue“. Brain Zoo Studios was the company he worked for on the project and they have been responsible for animating games such as Disney Infinity 3.0, Skylanders and more.

The significance of the resume is because the last game that came out for the franchise was God of War: Ascension back in 2013. No new animations were done on last year’s PS4 remaster so this might be a clue that God of War on PS4 is currently being developed.

It’s safer to categorize this as a rumor as people have put wrong things on their resumes before. Not to mention Sony has not formally announced that a God of War game is coming to PS4 just yet. If this animation is not for a new game, what do you think it could be for?