It appears the English voice actor of Beerus leaked information that Funimation is starting to record the English dub for Dragon Ball Super. 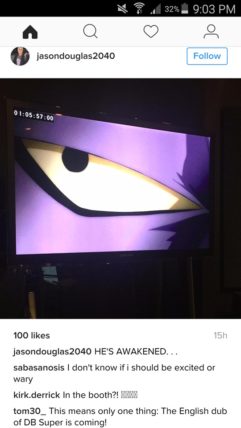 The English voice actor for Beerus, Jason Douglas, posted on Instagram an interesting photo of the character with the caption “He’s awakened”. It looks like a TV screen of Beerus is inside of a recording studio.

The interesting part is that Douglas has deleted the Instagram post, but Gojiitaaf managed to grab a screenshot of it. A deleted post usually means the public isn’t supposed to know about something this early.

It’s unlikely the recording is about a new Dragon Ball Z movie as one has not been announced/revealed yet. We do know Dragon Ball Super is being voice recorded in France and Toonami Asia is doing one too.

Not to mention the English version of the Dragon Ball Super manga will be out in May 2017. This is a sign that Western audiences might officially get to see the new TV series sometime next year.

Bear in mind, categorize this news as a rumor for know as Funimation have not announced anything yet. Hopefully they will make a big announcement on the English dub very soon.