This female-focused fighter will be headed to Nintendo Switch and PlayStation 4 later this year. 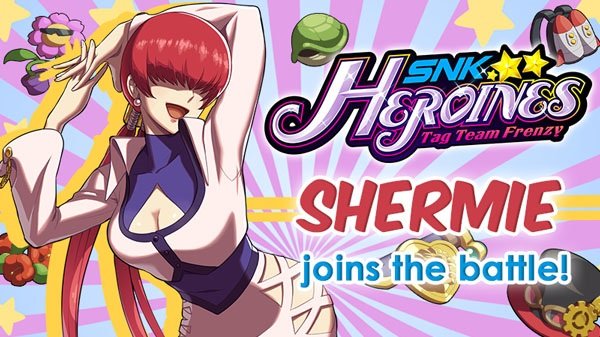 To recap, SNK Heroines: Tag Team Frenzy is a 2v2 fighting game featuring an assortment of female characters from SNK’s fighting franchises. In that sense, the game follows in the footsteps of 2000’s SNK Gals’ Fighters on the Neo Geo Pocket Color.

From what we know of the gameplay, it’s supposed to be fairly casualized (there are no low attacks and utilizes a single button system), placing an emphasis on fanservice and visuals. Producer Yasuyuki Oda did mention in an interview that he can see this being played on a competitive level so it will be interesting to see how that plays out once the game arrives later this year.

Shermie debuted in The King of Fighters ’97 and was also in the previously mentioned SNK Gals’ Fighters, but hasn’t seen much action in recent years. With her inclusion, the roster has now increased to eight (the accompanying trailer suggests six more characters will be added at some point).

Meet Shermie, a beautiful and hard-hitting grappler making her graceful return to the ring. Since first appearing in The King of Fighters ’97, she has remained a popular pick among players and is ready to take her place as the belle of the brawl with her devastating suplexes and bone-crunching drop kicks! Be careful, because one wrong move and you’ll get a taste of her Dream Finish, the Inazuma Leg Lariat!

Check out Shermie’s reveal trailer below: