The latest news in the world of video games at Attack of the Fanboy
June 15th, 2011 by William Schwartz 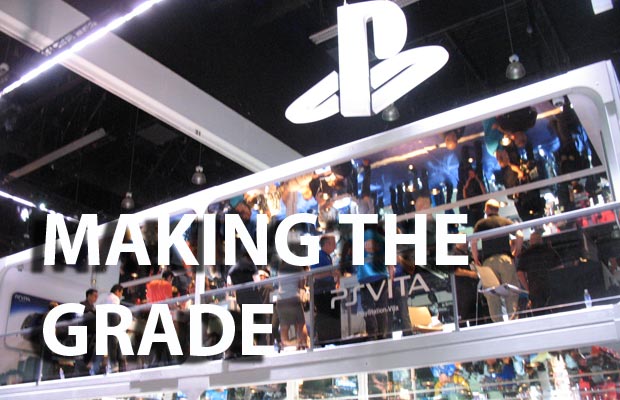 E3 has ended again giving us a whole new slew of games and tech to talk about, especially from Sony and it’s family of gaming devices, the PlayStation 3, PSP, and PSVita. The press conferences garner most of the attention at overall event as it is where the big three of the gaming industry show us what they have to offer. Throughout this article I’ll break down what was shown, what I thought about it, and give a final grade at the end.

Sony started their show with an apology to developers, distributors, and fans for the recent security hack. A much appreciated topic for them to address despite it not effecting me too badly as I’m currently focused on singleplayer. It was still nice to hear them being aware of the upset.

The Playstation Move was the centre of Sony’s conference. They showed off new games that are either Move only or incorporate the device in some way.  Some of these Move-centric announcements included NBA 2K12 having Move functionality (Kobe Bryant not included), Medieval Moves: Deadmund’s Quest, more LittleBigPlanet Move functionality, Dust 514, Bioshock Infinite, as well as more Move love sprinkled about. I can safely say that I didn’t really care about too many Move ideas. I think it’s a great concept, an accurate Wii controller in HD, but I’m just not hooked on this motion controller idea just yet. I think there is a need for a motion controller only game that is for the hardcore and makes sense on the platform. Most games just feel better on a couch with a joystick underneath each finger.

Sony likes to please the hardcore fans as well and they brought some of their big guns to the show to appease the core.  A few of the hardcore games shown were God of War Origins (PSP iteration on the PS3 in HD), Starhawk, Sly Cooper: Thieves in Time, Dust 514, Star Trek, Uncharted 3: Drake’s Deception, Resistance 3, and other exclusive content. Out of all the exclusive content coming to the PS3 in the future I’m most interested in this year’s releases. Uncharted 3 and Resistance 3 or even Twisted Metal are looking great. Next year looks to be a weaker year for Sony. Starhawk and the new Sly can’t be underestimated either and look to bring more entertainment goodness to the PS3.

I always look for new IPs at E3 and this year was a bit of a let down. No company brought too much of the new to the table. The big new titles coming to the PS3 in 2012 seem to be Starhawk, and Dust 514. Dust 514 is an interesting concept allowing PS3 gamers to interact with PC players playing EVE: Online. Starhawk looks to be a fast TPS  with lots of glorious explosions. Along with the ever inventive Sly series coming back it seems that Sony has quite a diverse lineup for next year.

The Next Generation Portable was also a big part of Sony’s conference with official unveiling of the name Vita. Along with the official name they also showed of launch titles as well as a price tag and features.  The Vita will be launched with some PS3 known franchises backing the launch titles. Uncharted: Golden Abyss is one of the best looking launch titles coming to the handheld which looks to hold up to the Uncharted franchise quality that we know. ModNation Racers is also coming to the Vita with the creation tools that the PS3 version was loved for. You can even play the PS3 created tracks on the Vita.  LittleBigPlanet will also be getting a Vita version as well as the other titles already announced. It is one handheld you want to watch this holiday season.

If Sony’s objective was to show that they were still on track to provide the best gaming experience for all walks of gamer’s they did it, and did it better than the competition. They didn’t have many new games to show, but the games they did show were top notch.