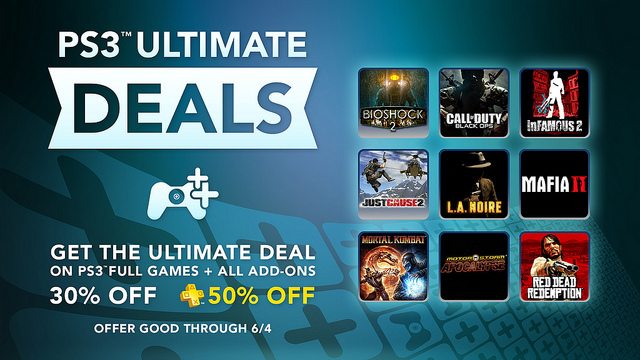 Are you a PS3 gamer who simply never got around to joining John Marston in his mission for salvation in Red Dead Redemption? Always wanted to test out your detective skills with L.A. Noire by utilizing its ground-breaking MotionScan technology? You can do all of that and more with Sony’s announcement of their “Ultimate Editions,” a list of popular, discounted PS3 titles that come bundled with all DLC.

Today through June 4th, you can get onto PlayStation Network and purchase some of gaming’s hottest titles of the past few years, and they’re all available for prices that just cannot be overlooked. If you happen to be a PlayStation Plus member, the news only gets better as you’ll be getting the bundles for a whopping 50% off.

Take a look at the available titles and Ultimate Editions packages:

InFAMOUS 2 Complete Edition – Cole MacGrath returns in SuckerPunch’s action adventure hit. Help save New Marais from the Beast, and itself.

MotorStorm Apocalypse– This intense racing game from Evolution Studios gives you over 40 tracks based in The City, on the west coast of the United States. Play through the Festival solo, in couch co-op, or online multiplayer.

L.A. Noire: The Complete Edition – Help Cole Phelps clean up 1947 Los Angeles in this captivating open-world crime adventure from Rockstar. This Ultimate Edition includes plenty of additional cases for you to solve.

Just Cause 2 Ultimate Edition – This Avalanche Studios title places you in the fictional Pacific island of Panau, giving you an open-world adventure experience you’re sure to remember. This Ultimate Edition includes new weapons and vehicles for you to enjoy.

Mortal Kombat with the Warrior Bundle and Klassic Skins Pack 1 – Get the latest version of this 2D fighter classic along with Klassic Costumes for Sub-Zero, Scorpion, Reptile, Mileena, Kitana, Ermac and Jade. Add in new warriors Skarlet, Kenshi, Rain and Freddy Krueger and you have this unbeatable Ultimate Edition.