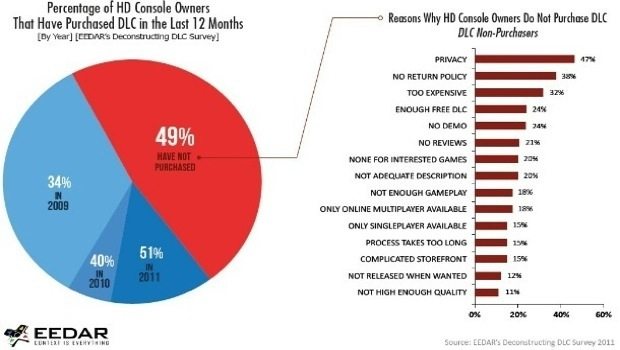 Downloadable Content has become one of the most popular methods for publishers to generate additional revenue from their video game releases. Season Passes, Episodic Content, Online Passes, VIP Passes, you name it, and a company has now tried to do it. While DLC might be found in nearly 100% of games that release, a new study shows that only 50% of current generation console owners actually purchase the content.

The report which was conducted by EEDAR shows that there were 20 million gamers are considered active DLC purchasers, which is up from 14 million when the last survey was conducted.

The penetration rate might not look that great from the outside, but EEDAR estimates that the market will continue to grow. The research group believes that worldwide, publishers will make $2 billion dollars on additional game content in 2012.