Terraria On Its Way To PS4 And Xbox One 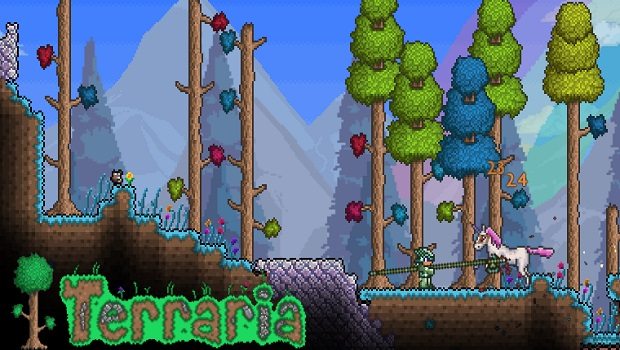 I hope players are ready to continue digging, exploring and building with Terraria on PS4 and Xbox One. Terraria, the critically acclaimed sandbox adventure game will be bursting at the seems with an enormous amount of content.  Upon its release on next generation consoles, Terraria will include over 1,000 new items that will be added to the original console game. Terraria is a lot like fan favorite Minecraft but is set in a 2D side-scrolling perspective. Offering over 1,300 crafting recipes, 150 enemies and 15 bosses to battle.

Players will have endless hours gameplay as they can literally dig to the ends of the earth and be able to craft with anything that they discover. The crafting system will allow you to make such things as armor, weapons and many other items. As the player, you will be able to explore vast and vibrant worlds while trying to survive treacherous perils all while fending off hundreds of magical and deadly foes. Once you think that you’ve made it through alive you will have to battle the mighty final bosses.

PlayStation 4 players will be able to cross-play with PlayStation 3 and PlayStation VITA versions of the game. This will allow you to either battle against or team up with an even wider PSN community than before. As an added bonus, the PS VITA version of Terraria will be bundled free with the PS4 version for a limited period during its launch.