New This Week in Video Games | Knack is not Good

The latest news in the world of video games at Attack of the Fanboy
November 10th, 2013 by William Schwartz 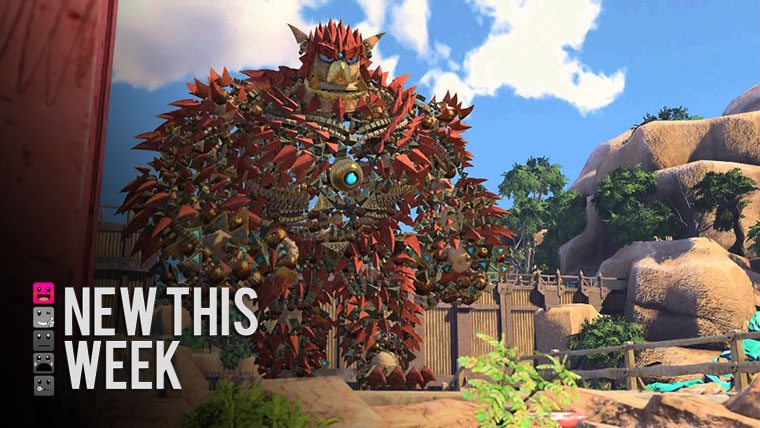 The PlayStation 4 – The “best” place to play with dynamic, connected gaming, powerful graphics and speed, intelligent personalization, deeply integrated social capabilities, and innovative second-screen features. Combining unparalleled content, immersive gaming experiences, all of your favorite digital entertainment apps, and PlayStation exclusives, PS4 centers on gamers, enabling them to play when, where and how they want. PS4 enables the greatest game developers in the world to unlock their creativity and push the boundaries of play through a system that is tuned specifically to their needs.

Knack – PlayStation 4 – Mankind must turn to Knack, an unlikely hero, to protect them from a dangerous new threat. The unassuming Knack stands at a mere three feet tall, but thanks to the power of mysterious ancient relics, he can transform into a powerful brute or even a gigantic wrecking machine. Knack is mankind’s only hope for turning the tide against the invading goblin army, but trying to harness the true power of the relics could threaten to put the whole world at risk.

Killzone: Shadowfall – PlayStation 4 – Killzone: Shadow Fall is the latest installment in the hugely successful Killzone franchise, developed exclusively for PlayStation 4, by Guerrilla Games. Thirty years after the events of Killzone 3, the world is a very different place, with two rival factions, the Helghast and the Vektans, living side by side divided by a vast wall. In the midst of it all stands a Shadow Marshal, an elite soldier, the best of the best. As Shadow Marshal Lucas Kellan, you’re sworn to protect your home and the values you believe in. Maintaining the fragile peace is difficult when there is no trust between either side. A series of escalating conflicts puts you on the path of a Helghast intelligence operative named Echo, who fights for the same reasons but on the opposite side. Strive to uncover the whole story as the intense, immersive combat of the Killzone series is reborn on PS4.

Warframe – PlayStation 4 – Warframe is a cooperative free-to-play online action game set in an evolving sci-fi world. Join your friends in player-vs-enemy raids across the solar system and master the power of the Warframes. Stand alone or fight together against enemies that threaten your world.

Trine 2: Complete Story – PlayStation 4 –  Trine 2 is a sidescrolling game of action, puzzles and platforming.  You play as one of the Three Heroes who make their way through dangers untold in a fantastical fairytale world.  Physics-based puzzles with fire, water, gravity and magic; Wicked Goblins; Climb the tallest trees and towers in the enchanted forest!  Trine 2: Complete Story fully integrates the Goblin Menace expansion campaign and the unlockable Dwarven Caverns level into one mighty fairytale!

Flower – PlayStation 4 – Flower expands the team’s tradition of delivering simple gameplay, accessible controls and a medium to explore emotional chords uncommon in video games. In Flower, the surrounding environment, most often pushed to the background in games, is pulled to the forefront and becomes the primary “character.” The player will journey through a beautifully vivid and changing landscape in this fresh and genuine game only on PS3.

Injustice: Gods Among Us: Ultimate Edition – Xbox 360, PlayStation 3, PC, PlayStation 4 – Takes NetherRealm Studios’ bold new fighting game and enhances it with over $60 of new content including 6 new characters, over 30 new skins and 60 new S.T.A.R. Labs missions. The addition of the new characters brings the roster to 30 fan favorite DC icons, including Batman, The Joker, Green Lantern, The Flash, Superman and Wonder Woman. Heroes and villains will engage in epic battles on a massive scale in a world where the line between good and evil has been blurred.

Super Motherload – PlayStation 4 – Super Motherload is a digging adventure with a procedurally-generated world that changes each time you play. Purchase powerful upgrades and supplies for your mining pod as you progress and prosper.

Blood Knights – PC – Blood Knights is a hack’n’slay action RPG that tells the story of the ancient war between humans and vampires, where the war spirals out of control and the world faces annihilation. The game combines spectacular fights with roleplay elements in single player or co-op mode.

Bioshock: Infinite Burial at Sea – Xbox 360, PlayStation 3, PC  – Come back to Rapture in a story that finds Booker and Elizabeth on the eve of the underwater city’s fall from grace. Get a taste of Rapture in its full glory, almost entirely built from scratch in the BioShock Infinite engine.

Resogun – PlayStation 4 – RESOGUN is an intense fast-paced shoot em’ up developed exclusively for the PS4™ system. Unleash a diverse array of devastating weapons including lasers, missiles, overdrive, and nova-bombs to blast hordes of enemies and rescue the last survivors from distant galactic colonies that are under ruthless attack from an evil alien invasion force.

Battlefield 4 – PlayStation 4 – Battlefield 4 is the genre-defining action blockbuster made from moments that blur the line between game and glory. Fueled by the next-generation power and fidelity of Frostbite 3, Battlefield 4 provides a visceral, dramatic experience unlike any other.  Only in Battlefield can you demolish the buildings shielding your enemy. Only in Battlefield will you lead an assault from the back of a gun boat. Battlefield grants you the freedom to do more and be more while playing to your strengths and carving your own path to victory.

Contrast –  PlayStation 4 – In CONTRAST, you will explore a dreamlike, vaudevillian world of the 1920s. In this universe, where the boundaries between showmanship, magic, intrigue and deception are blurred, you play as Dawn, the imaginary friend of a young girl named Didi.

The Pinball Arcade – PlayStation 4 – The Pinball Arcade features exact recreations of the all-time greatest pinball tables from Williams, Bally, Stern, and Gottlieb together in one game. Every flipper, bumper, sound effect, and display pixel has been painstakingly emulated in astonishing detail!

XCOM: Enemy Within – Xbox 360, PlayStation 3, PC – Threatened by an unknown enemy, Earth’s governments unite to form a secret paramilitary organization, known as XCOM, to combat this extraterrestrial attack. As the commander of XCOM, you control the global defense team and its resources in a battle against the terrifying alien invasion. You control the fate of the human race by creating and managing a fully operational base, researching alien technologies, planning combat missions, and controlling soldier movement in battle.

Mario & Sonic at the Sochi 2014 Olympic Winter Games – Wii U – Feel closer to the action than ever before with the first entry in the Mario & Sonic series to utilize the Wii U GamePad and Wii Remote Plus controllers. In Biathlon, a cross country skiing/shooting hybrid, you’ll even use both as you switch controllers on-the-fly to earn the coveted Gold Medal. In addition, take on Snow Day Street Hockey, Rollercoaster Bobsleigh, and more supercharged Dream Events that combine familiar sports with outrageous settings, rulesets, and extreme action! And for the first time, head online* for global competition to help earn top scores for your home country!

Just Dance 2014 – PlayStation 4 – Just Dance 2014 – the sequel to Just Dance 4, the world’s #1 selling dance game – is bringing all new moves with breakthrough features for every motion-control platform and over 40 of the hottest tracks! Dance to current pop hits or celebrate with legendary classics – then take the fun to another level by playing with anyone anywhere in the world, leading back-up dancers, or creating customized Just Sweat experiences. Bring home the ultimate party starter and join in the fun!

LEGO Friends – 3DS – Welcome to beautiful Heartlake City where summer fun awaits. Meet your new LEGO Friends and join them on exciting adventures that build friendships with the girls and allow you to express your individual style and personality as you explore the city. Shop for the latest outfits and accessories, select the perfect hairstyle, decorate your bedroom and even pick out a pet. Choose how to spend your summer vacation; whether you’d rather attend horse riding camp, perfect a dance routine, or care for an animal at the rescue center, you can do these things and more as you express your creativity, and build fun memories with your five new friends.

Need for Speed Rivals – PlayStation 4 – Welcome to Redview County, where a street-racing rivalry between cops and racers never stops as both sides compete in an all-out war to take over the social, local and national media and earn the best cars, mods and technology. Risk Everything. Trust No One.

Madden NFL 25 – PlayStation 4 – Powered by EA SPORTS Ignite, Madden NFL 25 ushers in the next generation of sports games delivering ten times more detail than any game in the franchise’s 25 year history. Players think and anticipate in the trenches and across the field. Every step is calculated to showcase the most realistic player movement ever, and the emotion of Sunday is brought to life like never before with living sidelines, rich commentary, and thunderous crowds. Madden NFL 25 changes the game forever.

Switch Galaxy Ultra – PS Vita – Weave your way across the galaxy in story mode, avoiding enemies and obstacles. Along the way collect credits and look out for pickups on the track that allow you to obtain the best times! For higher-stakes, choose survival mode and see how long you can last with one-life and an infinite track.

Deadfall Adventures – Xbox 360, PC  – James Lee Quatermain is a man of many talents, yet holding on to money isn’t one of them. James is an adventurer by trade, just like his legendary great-grandfather Allan Quatermain. And he knows how to squeeze money out of this famous name of his, while at the same time despising it. Despising those who believe his great-grandfather’s tales of the supernatural and those who make fun of them alike. Accordingly, Quatermain isn’t all too keen on escorting Jennifer Goodwin, an US agent and former colleague of his, to an Egyptian temple structure in order to retrieve an ancient artifact – The Heart of Atlantis. Neither does he believe in the reputed invigorating qualities of this artifact, nor does he care the least that a division of the Ahnenerbe, the Nazi department specialized in the occult, is after The Heart as well.

Ratchet & Clank: Into the Nexus – PlayStation 3 – After one of the most infamous manhunts in galactic history results in the capture of Vendra Prog, Ratchet and Clank offer to escort the dangerous criminal to the Vartax Detention Center. After a daring orbital jailbreak at the forgotten edge of the galaxy, Ratchet and Clank find themselves lost in an abandoned sector. There, in deepest space, they uncover an inter-dimensional event that threatens the universe—and forces Ratchet to decide what’s really important.

Lego Marvel Super Heroes – PlayStation 4 – LEGO Marvel Super Heroes features an original story crossing all the Marvel families. Players take control of Iron Man, Spider-Man, The Hulk, Captain America, Wolverine and many more Marvel characters as they try to stop Loki and a host of other Marvel villains from assembling a Super weapon which they could use to control the Earth. Players will chase down Comic Bricks as they travel across a LEGO New York and visit key locations from the Marvel universe such as Stark Tower, Asteroid M, an abandoned Hydra Base and the X-Mansion.

Skylanders Swap Force – PlayStation 4 – Embark on an exciting new adventure with the Skylanders and the SWAP Force. For generations, the SWAP Force protected the volcano that replenishes Skylands? magic. That is until an epic battle caught them in an eruption that blasted them apart, sent them to Earth and gave them the ability swap powers. Only you can mix and match their tops and bottoms, put them on the new Portal of Power and help save Skylands.