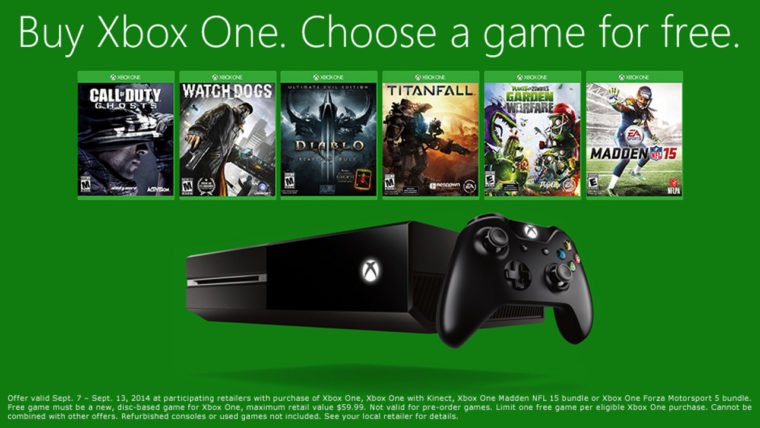 Microsoft has announced a new offer available to new Xbox One buyers starting next week. Anyone who purchases an Xbox One between September 7th and the 13th will receive one retail Xbox One game for free. Unlike most offers like this the Xbox One deal has very few restrictions, meaning you can even get new releases like Destiny for free with your new console.

For one week only when you buy an Xbox One, you’ll get a free Xbox One game of your choice.

The best part about the offer seems to be that it applies to all new Xbox One purchases, meaning it stacks with bundles as well. So, if you buy a bundle like the Xbox One Madden NFL 15 Bundle then you will also be able to throw in another game, like Titanfall, and end up with two games ready to go on your new system.

Microsoft explains: “And the sky’s the limit: Whether you want to lock-and-load with your friends in Destiny or Titanfall, face the legions of hell in Diablo III: Ultimate Evil Edition, hack the planet in Watch Dogs, or hit the sports arena of your choice in Madden NFL 15 or NHL 15, the choice is yours. The offer is valid for any retail Xbox One game, and the offer is good for our Xbox One system bundles, too – so if you want to pick up the Xbox One Madden NFL 15 Bundle or Forza Motorsport 5 Bundle, you’re getting another free game of your choice priced at $59.99 or lower on top of it!”

Now for the fine print, which is surprisingly small for a deal like this. The offer is only valid in the US between 9/7 and 9/13, and can only be redeemed at participating retailers. Also the game has to be priced $59.99 or lower, so no special/limited editions here. That’s pretty much it. The list of retailers isn’t known at this time, but once it is you can walk into any one of them and buy a new Xbox One in any configuration and get another game for free.