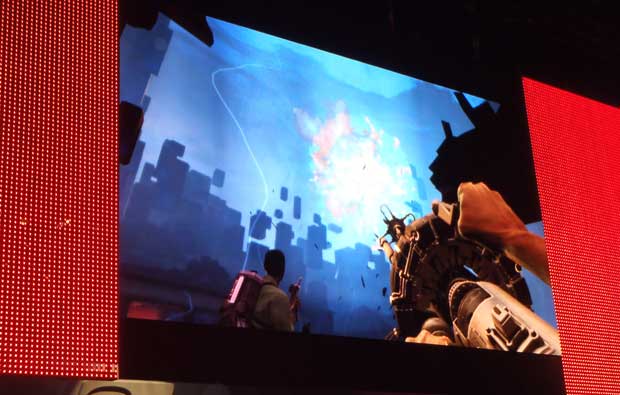 There was plenty to see today at E3, both on the show floor, and behind closed doors.  Today, 2K games revealed XCOM to us for the first time in a year.  Alot has changed from what we saw at last year’s E3.  In a twenty minute long demonstration, 2K Marin walked us through more impressive gameplay, albeit much different than what we expected.

When we saw the game last year, it looked like a first person shooter.  Very similar to Bioshock in it’s offering as a first person shooter first and foremost.  As explained at the show, 2K Marin got back to the drawing boards with XCOM, and have incorporated some really interesting concepts in the gameplay.

Self professed “RPG Nerds” 2K Marin’s  XCOM appears to be nothing like a first person shooter and their linear nature.  The game calls on many elements from different genres, ranging from real time strategy to role playing games.  It has a level system which you use for your character and your squad-mates.  Which will allow you to tackle each instance in a different manner.  Your small squad will face seemingly insurmountable odds, until you factor in the game’s core mechanism.  Which is capturing the alien technology and turning it against your enemies.  We didn’t get to see it all, but it looks like each instance has multiple ways to handle each encounter, depending on the strengths of your party.

The game had some very promising qualities.  It had amazing graphics in some instances, some very intriguing gameplay, and the developers promised a story that hits deep and calls on the historical settings for references.

2K didn’t give us a timeline on when XCOM would be coming, but even at this stage of development, it was impressive.