The latest news in the world of video games at Attack of the Fanboy
July 30th, 2016 by Dean James 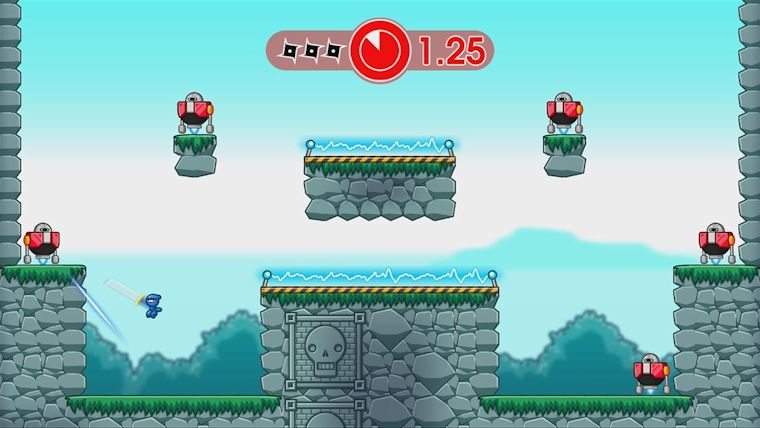 Racing against the clock to beat a timer is something that has been prevalent all throughout gaming history, but rarely are players limited to only 10 seconds at a time. That is exactly what the developer behind 10 Second Ninja aimed to do though when it originally released on PC, and now the game has branched out to consoles with the partial sequel in 10 Second Ninja X.

The title of 10 Second Ninja X does a very good job at explaining the premise in a simple way, as players take control of a ninja that goes through many levels and has 10 seconds to complete each of them. There is a little bit of a story surrounding this as the evil Greatbeard has started taking animals and making them into robots, like Sonic the Hedgehog, so you board his flying airship to take him down.

From the very beginning, the ninja and Greatbeard have banter back and forth that continues throughout the game. This gets better when the character of Benji is introduced, who is working under Greatbeard on the ship, but is trying to help you. The game even has these funny alternate title screens that pop up at certain points when Benji joins in, which shows that the game knows when not to take itself seriously in a good way.

Where this becomes a problem though is whenever you unlock a new area, sometimes these moments of dialogue can drag on for way too long. Oddly enough, the game uses the Y button to skip to the next piece of dialogue, which is very uncommon as well. You also must travel to the generator room each time between these, though it would have been nice if the game had more for you to do there than talk to Benji each time and then return back to the same style missions.

Once actually aboard his ship, you will see six different television screens that are essentially the level select areas found in the game. At the start, you only have access to the first area, but more are unlocked the further you get into the game. Within each of these screens, you can choose from 10 levels that all fall under the 10 second time limit. The goal in each and every one is to destroy the robots not only before the 10 seconds are up, but as fast as possible.

Collecting stars in 10 Second Ninja is very important, and that is dependent on the speed at which you complete each level. Finishing the level before the 10 seconds are up will guarantee you at least one star, but you’re going to have to work a good bit harder to earn two or three stars. Some stages seem to have a little more leniency and reward you with two or three stars with a not incredibly fast performance, but others require exact precision to barely get the extra stars. 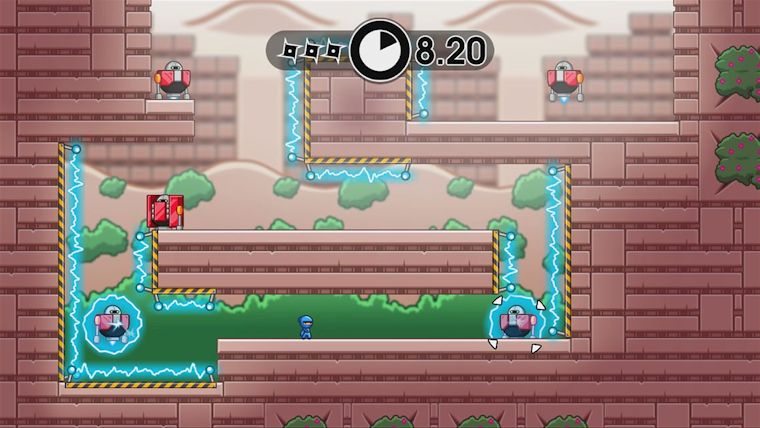 10 Second Ninja X does not hold back on the difficulty in the beginning levels, which can especially be frustrating early. To even reach the second area in the game, you must collect 20 stars, or an average of two stars for each level. This is pretty rough for just starting out in the game, but the game’s ability to restart a level with a simple press of the button definitely is a big help.

Well suited for a quickplay experience

The early levels are very simplistic in design, with you simply finding the quickest path of taking out the robots, by either your sword or throwable shurikens. The level design gradually gets more complicated however, with some electricity covered robots requiring shurikens and others needing you to hit switches to access. These never feel too overwhelming or convoluted, though often they can be more forgiving and will be easier to earn higher numbers of stars than even the earlier stages. This is a little disappointing for the later stages, but it is also a case of just getting better at the game as you go along.

While you may think that these initial 60 stages and the boss like stage is all, 10 Second Ninja X includes what are known as legacy levels as well. These levels are taken from the original 10 Second Ninja game on PC, so there is a surprising number of levels overall, even if you can clear them all pretty quickly. For three starring each of these, you can even unlock the game’s Marathon mode, which tasks you with completing all 10 stages in each area in one go, with no restarts or anything between them. This was also a welcome addition that feels like a great reward for those that grind themselves through the game. 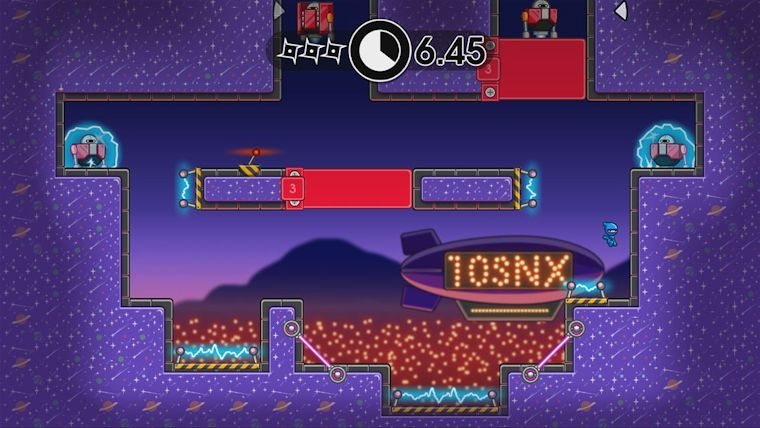 Beyond the levels themselves, the game also has a few collectibles that may keep you coming back in the game a few more times. There are nine special pieces that you can collect in the game that are found in the overworld through a little bit of exploration, but these feel a little out of place in the style of game it is, with an extra costume being the only reward. There are also other costumes that you can unlock by completing certain tasks as well, but these are basically just skin swaps that aren’t really all that worth it in the long run.

10 Second Ninja was already a very fun and enjoyable game in its initial release on PC, but now coming out as the more content heavy 10 Second Ninja X, console owners get to join in on the action. Though the variety in the level design as you advance in the game leaves a little to be desired, the rapid pace of the levels are very well suited for a quickplay experience that can serve as a very enjoyable palette cleanser between other games.