12 Minutes does a lot with a little. The entire game takes place in a tiny apartment, there are only two characters other than yourself, and of course, you only have 12 minutes before time resets and you have to start everything over from the beginning. You don’t have a lot to work with, but you’ll learn that you can do quite a lot with the limited toolset at your disposal. Just when you think you’ve got everything solved, 12 Minutes throws a new lead into the mix or introduces a new problem you weren’t expecting, and that’s why it’s so brilliant.

Time loops are nothing new in video games, but 12 Minutes’ take on the genre is incredibly engaging. The 12-minute loop feels carefully constructed. Every item feels precisely placed, all three rooms have specific purposes. Characters’ routines can be interrupted at any time, but there’s never an opportunity to put a perfect plan into motion that will get every answer in one run. To make progress, you have to make mistakes. Carrying your failures and new knowledge into the next cycle is the only way to move forward in the story. There are several moments where I thought I was sure to break the cycle and escape the loop only to end back up at the front door at the beginning of the evening once more. The pace at which the game feeds you new information is wonderful. You only ever have just enough information to form a basic plan for the next loop, and there’s never any way of knowing how things will go for sure. Each failure refines your plans further and further until they finally force the game to crack and feed you another lead. When you do end up learning something new, characters basically never tell you more than one detail before another issue arises, making it very easy to find yourself in a cycle of ” just one more loop” until you’ve been playing for hours.

It also helps that the game features a star-studded cast. The leading couple is played by James McAvoy and Daisy Ridley, both of which do a great job in their respective roles. However, the star of the show is Willem Dafoe, who plays the cop that enters the apartment in the middle of every loop. All three characters appear flat and one-dimensional at first, but it’s easy to grow attached to them as you slowly learn their stories.

I can’t speak much about Daisy Ridley and Willem Dafoe so as not to spoil the game, but McAvoy’s character stands out as well despite basically being a stand-in for the player. Every time the loop restarts, our protagonist vents his frustration at his seemingly futile efforts, but he also expresses relief that things are getting easier each time. He cracks jokes, makes threats, and wrestles with all sorts of feelings as a man stuck in time. 12 Minutes is a cycle of frustration and relief, and McAvoy’s performance really hammers that idea home. Ridley and Dafoe are the real emotional core of the story, but McAvoy’s character is a great protagonist as well. 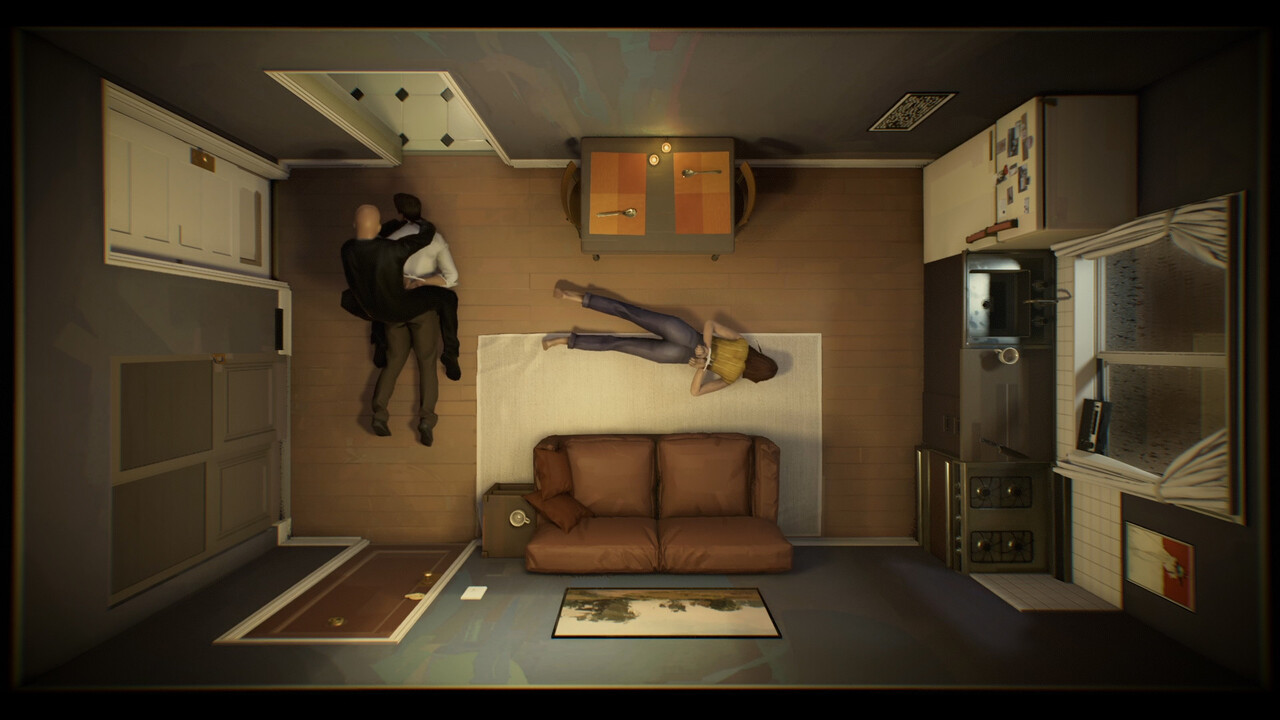 Gameplay-wise, 12 Minutes is a point-and-click adventure. You can click to pick up items scattered across the apartment, click on characters to speak with them, and click and drag items together to combine them or interact with them. You can grab anything at any time, and performing certain actions at certain points during the loop will result in different outcomes.

The loop itself is much more restrictive than the one in, say, Outer Wilds. In that game, you have a breadth of options available from the start, only limited by your knowledge of the solar system. 12 Minutes works largely the same way, only the loop is more aggressive. You cannot stop and think for too long. There are forces actively working against you, and things will happen to you if you do not act. Having other characters tossed into the mix also complicates things. In 12 Minutes, you not only have to deal with the time limit, but also the two other characters who have wildly different motivations and desires. It can be immensely upsetting to figure out what you need to do only for one of the other characters to get upset, say something they shouldn’t, or leave the apartment, but these added restrictions are what make 12 Minutes’ puzzles so much fun to solve. The whole process is very intricate, like moving pieces around a chessboard in real time.

The rush of excitement that I got from unlocking a whole new tree of dialogue options is something I haven’t felt from a puzzle game for a long time. After a few dead-end loops, I would typically walk away from the game and take a break, but 12 Minutes would continually pop into my mind when I was away from it.

Any time a new strategy, theory, or item combination would come to mind, I’d scramble to start the game up just for one loop to see if I could make a breakthrough. And when a small change would finally cause a character to open up to me, that one loop would become two, and then three, and so on. I only have a small handful of complaints with 12 Minutes, but they hardly detract from the experience. It sometimes takes a second for your character to actually interact with something you click, and animations can look a bit strange at times, especially when characters are interacting physically with one another.

These are minor nitpicks though, and they’re easy to get used to. On top of that though, puzzle solutions can sometimes feel obtuse, but that only applies to one or two specific solutions for the entire game. It’s also easy to understand why these solutions are the way that they are as you progress further in the game, too.

12 Minutes is easily one of the best games of the year. I was surprised by how quickly it grabbed me, and it maintained that hold until the end. It feels like nearly every loop ends with an exciting cliffhanger that leaves you rushing to start the cycle over again. It can be a bit difficult to maintain focus when you’re stuck on a puzzle and you find yourself beating your head against the wall in search of a solution, but those breakthrough moments are more than worth the trouble.