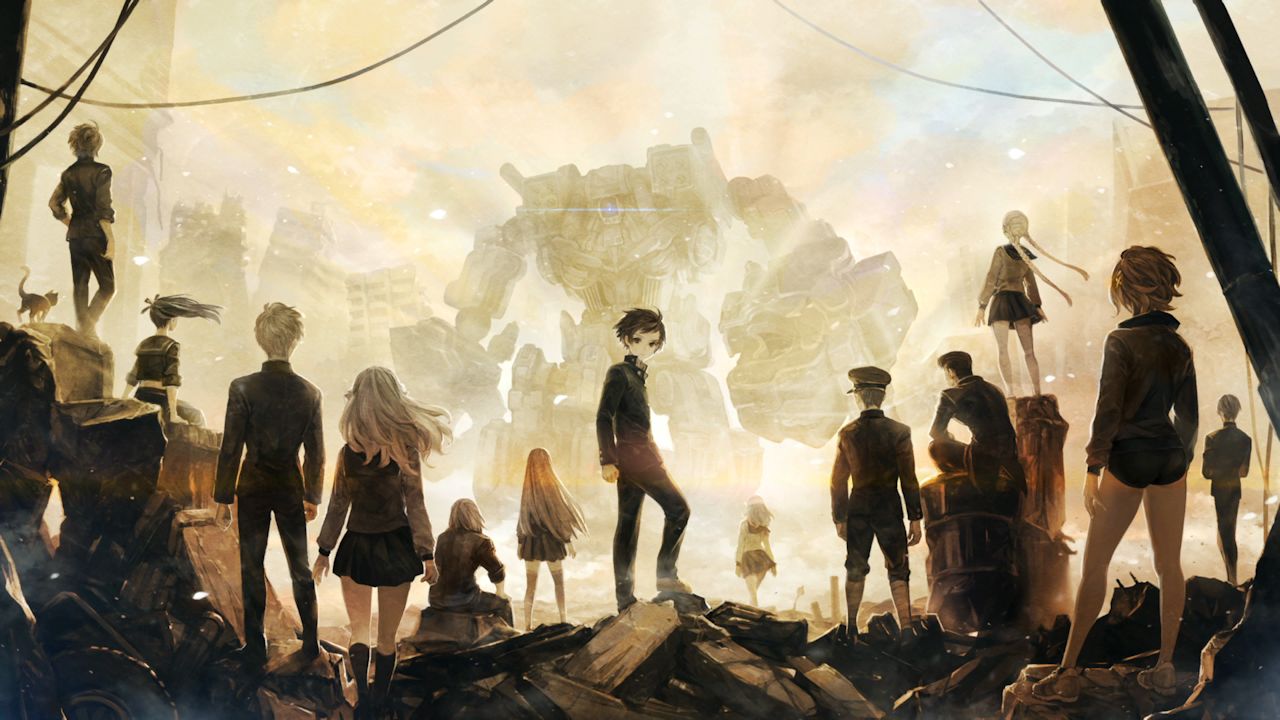 There are some game developers that have a very distinguishable style that sets them apart from the rest, with Vanillaware definitely being one of those. Dating back to Odin Sphere and more recently Dragon’s Crown, Vanillaware has utilized two dimensional artwork over a 2.5D style plane in a way that very few others have. While they have maintained this visual style, they have gotten much more ambitious with the gameplay and story telling in their latest game known as 13 Sentinels: Aegis Rim.

The story in 13 Sentinels: Aegis Rim is a multi-generational one that features 13 main characters with interweaving plots throughout the game. With the term multi-generational, you may be expecting to see the game simply follow say different characters across time periods that are connected to one another. However, time travel plays a prominent role in this game that dates back as far as near the end of World War II, jumps to 1985, and then jumps a few times much further into a world that has been nearly destroyed. 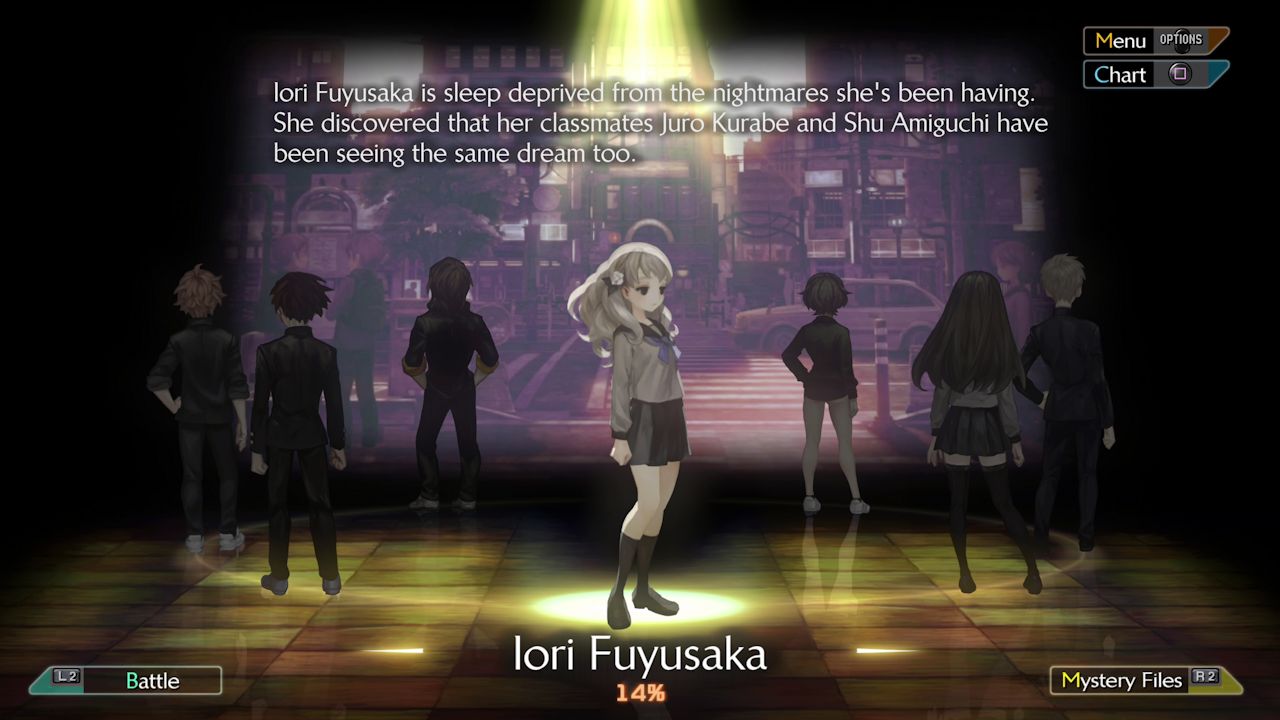 13 Sentinels: Aegis Rim starts off pretty standard as you are introduced to a few of the characters like Juro Kurabe and Iori Fuyusaka as they are classmates in 1980s Japan. You very quickly realize this is no ordinary high school adventure for these characters though, as the game starts to jump to the future in these confusing moments that actually start to introduce the combat within them. It ends up that this world is being attacked by kaiju monsters like you would see in Godzilla, with them being referred to as both kaiju and more specifically Deimos at points of this game. These monsters are not your typical kaiju though, as they are actually mechanized creatures that come in a variety of different types.

To combat these kaiju, a series of mech suits known as Sentinels were created that require a driver inside of them to be used. This is easier said than done though, as it can cause great harm to people if not done right. The usage of the Sentinels themselves is a big plot point for many of the characters and obviously plays a big role in the combat as well. To describe 13 Sentinels: Aegis Rim’s story in a quick summary like this only scratches the surface of the game’s story, including a magical cat that tasks one of the characters with going after certain other characters with magic, so you really will have to experience what ends up being a stellar story when all is said and done for yourself to get the full effect.

The game utilizes a very unique method of storytelling that can seem very overwhelming at first, especially due to the time travel. Everything is first introduced in what is considered the Tutorial section made up of seven episodes. These introduce us to the prologues of a number of the characters, with the chronological setting often being quite different. This can be very confusing at first to the point where it starts to feel convoluted, but this is actually how the game wants you to feel at this point, as things start to make a lot more sense as you play through each of the 13 characters’ stories. 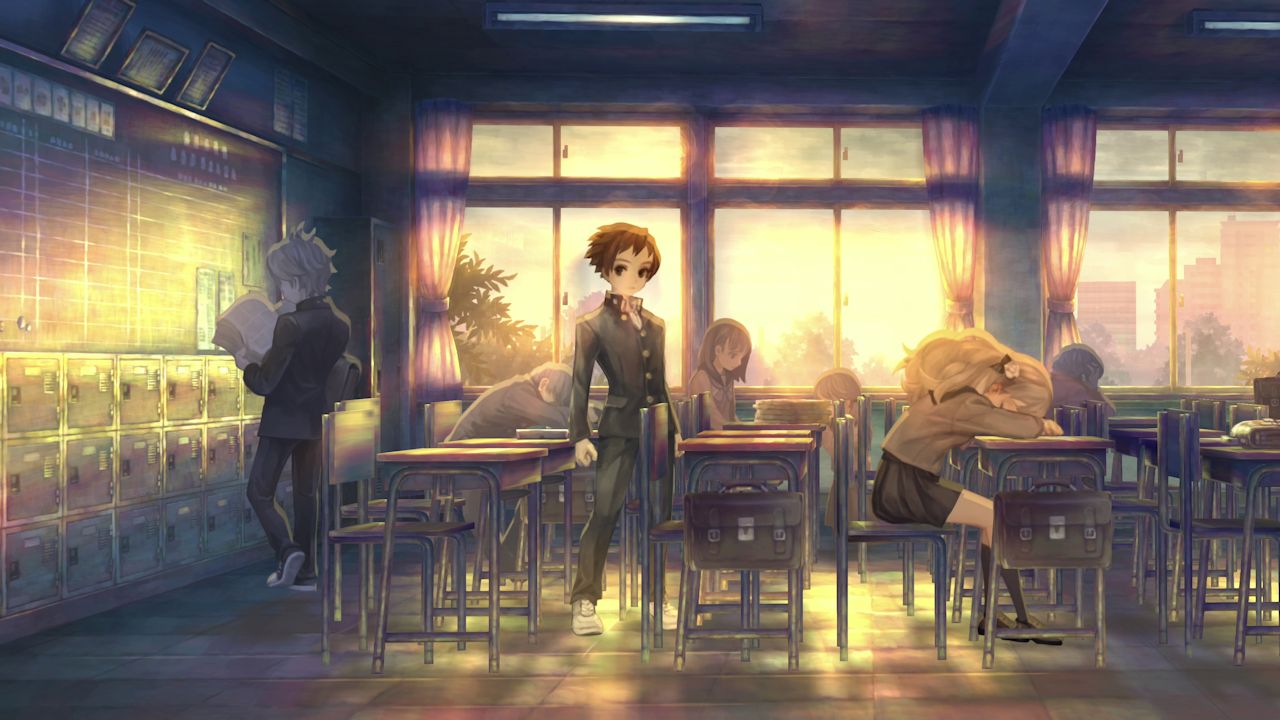 13 Sentinels: Aegis Rim features a departure in gameplay style from what you would normally expect out of Vanillaware. The side-scrolling design in their games have typically featured action-based combat akin to a Metroidvania, but this game is quite different. For the majority of the story segments in the game, you will be walking around and interacting with other characters in a visual novel format. As you talk with others, you will obtain new words for what is known as your Thought Cloud, which you can use to advance in certain areas.

These key words are very important when it comes to the different characters, as many of them have multiple paths to choose from depending on how you interact with others and what key words you may use in given situations. What can get frustrating though is that you are very often having to press X again and again to keep speaking with a character, rather than the game continuing a steady conversation. This can get tedious pretty quickly, but there’s really no way around it in the game. By pressing Square at pretty much anytime, you can bring up each character’s current story path and it will show alternate routes that are available and often how to access them. What is very helpful is that you can immediately jump right back to specific segments from this story tree where the paths do diverge as well. 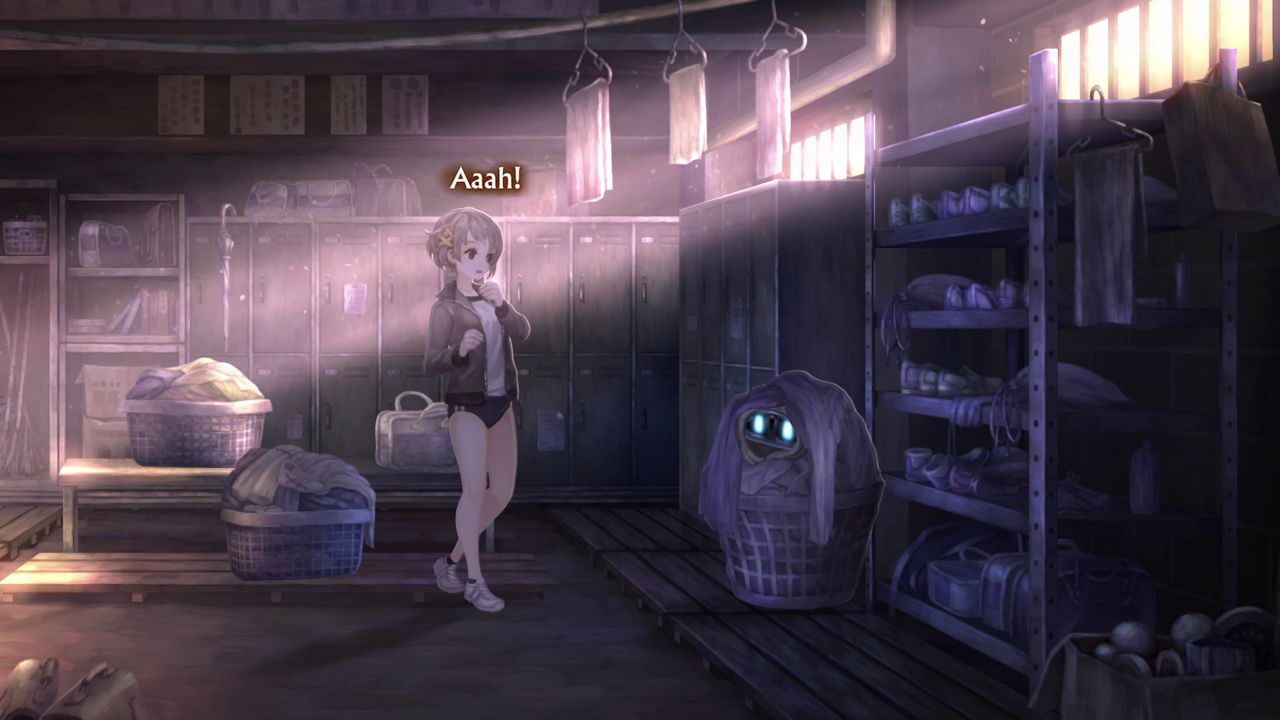 Rather than mix in combat within these sections, the main action in 13 Sentinels: Aegis Rim takes place elsewhere in the far future where the kaiju are consistently trying to attack. In these segments, you get to organize your team between offensive and defensive characters, which will alter their abilities. You take direct control of the offensive characters in your party here in a top-down cityscape that is very plain looking overall. From here, you must move each character around the map and select various actions that they have equipped to try and take down the opposition in what is an RTS at its core. Sometimes this may be as simple as using offensive skills like missiles, while other times you have to be strategic and employ an EMP to lower their shields before attacking. Playing defense is also a big part of surviving as well in most stages, as you are often playing with a clock that is counting down before an Aegis is activated that will wipe out the enemies as well.

The combat can definitely seem a bit daunting at first due to everything they throw at you, but it’s not as complex as it seems once you get the hang of it and figure out the best strategies for survival. On top of that, the game offers three difficulties levels for you to choose from to help tailor the experience directly to you. The default difficulty offers a balance on both the story and combat, while the easier and harder difficulties sway more towards their respective directions.

After the completion of the tutorial sections that intertwine the most story driven elements and the gameplay, 13 Sentinels: Aegis Rim takes an interesting route that splits up between the two distinct styles, the visual novel adventure style and the top-down turn-based combat system. This is seen directly on the main menu, which offers three options known as Destruction, Remembrance, and Analysis. 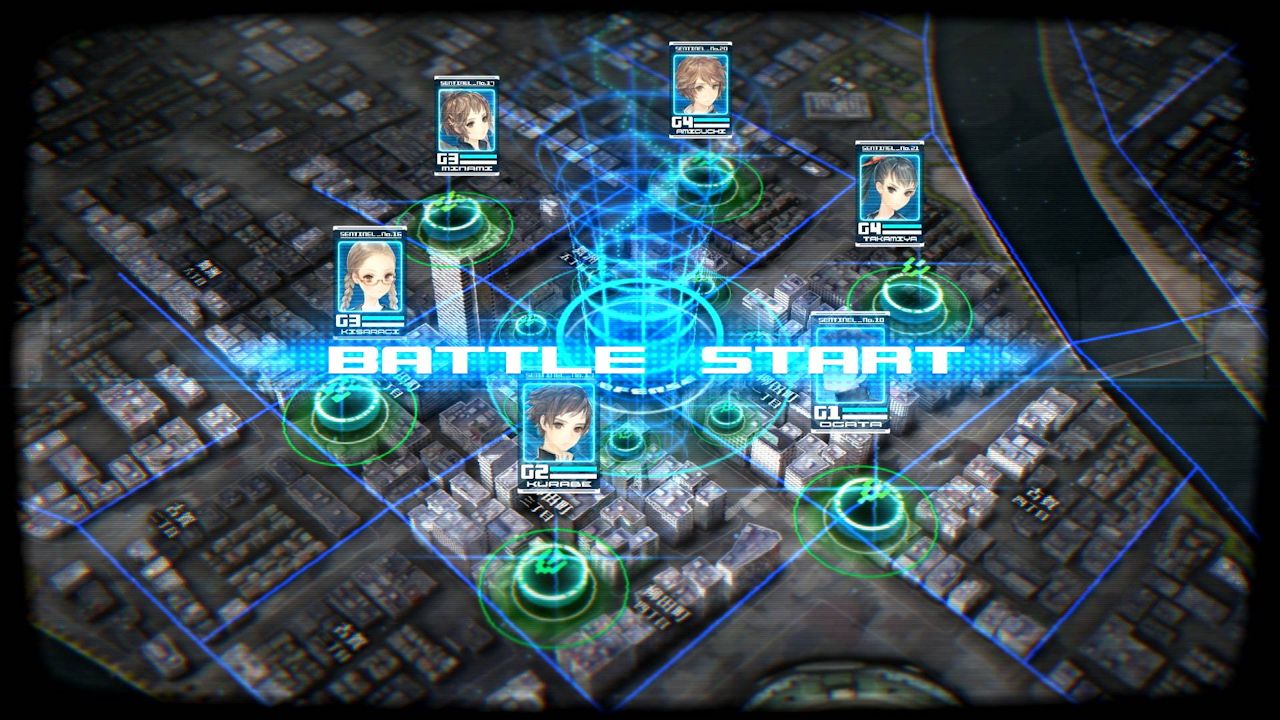 Destruction is the direct combat sections plus some story beats before and after each battle. Remembrance is filled with the exclusively story driven adventure segments, which have you pick one of the 13 characters to see how their story unfolds. You do not start with anywhere near all of them available to choose from, but they will be unlocked as you play through other character’s stories. The Analysis section basically serves as a recap of everything in the game that has occurred to date through text, while also giving you the ability to replay through past story segments. With as convoluted as the story can get at times as you’re switching between the large cast of protagonists, this is a very important feature to have been included. This is especially the case with keeping up with the various relationships between characters, which play a big part in this game.

After unlocking both Destruction and Remembrance, you will not be able to just power through one without touching the other either. This is because certain areas of the game are gated behind others, largely for story reasons, even within Remembrance itself. For instance, you will not be able to play through the entire story for any of the characters without also furthering the stories of others. In fact, some of the gates you must pass will require you to reach a certain story percentage on a set number of characters. This also extends to the Destruction stages, as there are moments here that will require you to do something in Remembrance before you can access the next Destruction stage. 13 Sentinels: Aegis Rim certainly gives the player a lot of choice in how you want to tackle everything, but this works well as a way to still make sure you are getting the entire experience in the end. 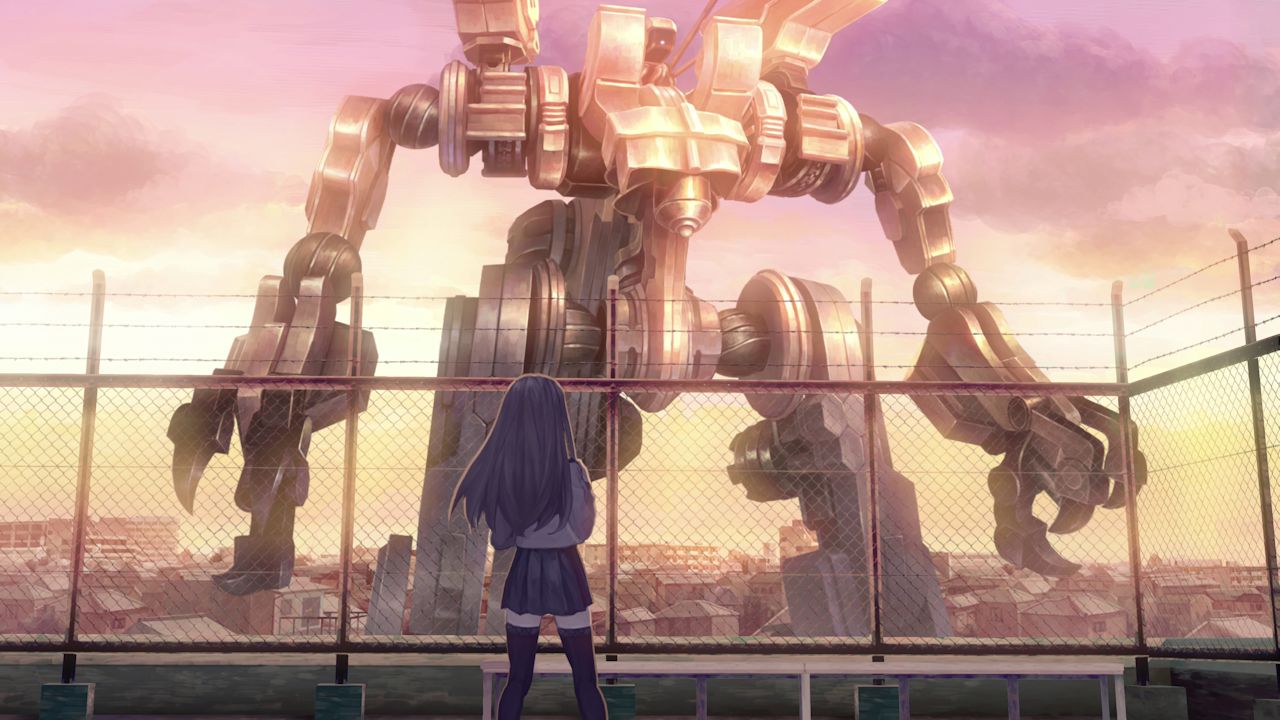 While alluded to earlier, you can’t really talk about a Vanillaware game and not discuss the visuals. The developer has never been known for cutting edge graphics, but they definitely have their own style that is once again reflected here. The pastel-like 2D character art used here looks hand drawn and fits right in with the well designed, albeit fairly limited backgrounds. As mentioned prior, the cityscape designs during the combat segments are very plain, but they somehow fit with the overall aesthetic of this nearly ruined future. The Japanese voice acting is also really impressive here, with the game set to get a free update that includes English voice acting at launch for those that would prefer that as well.

Coming seven long years after the release of Dragon’s Crown, Vanillaware takes a number of risks in 13 Sentinels: Aegis Rim. Having such a widespread story across 13 characters that also feature time travel between multiple periods was a tall task to take on, but it really leads to some very satisfying payoffs in the adventure style setting. This is interwoven with a complex, yet still enjoyable RTS style combat system that also helps to push the narrative forward itself too. Combining two very different gameplay styles together, somehow everything just seems to work well in Vanillaware’s best game to date with 13 Sentinels: Aegis Rim.

While looking perhaps a bit too ambitious on the surface with two distinctly different gameplay elements, 13 Sentinels: Aegis Rim is a captivating sci-fi adventure with great characters set across multiple periods of time. There is no question that the game will have people very confused during the first few hours, but the split story really starts to come together and is well worth playing through to unravel the ongoing mysteries found throughout.