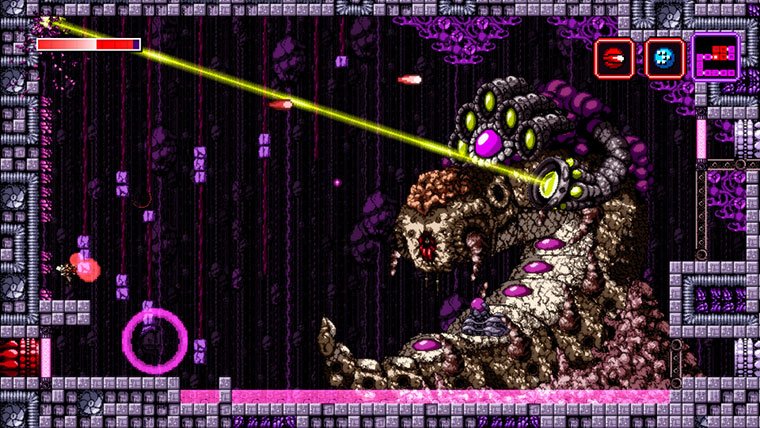 Many of the games we play today are made by tens, sometimes hundreds of developers. In the case of the soon-to-be-released Axiom Verge, it’s been made by one. This retro-styled love letter to Metroid and other games which encourage exploration and puzzle solving, looks to prey on your nostalgia for generations gone by.

You’d be forgiven if you’d mistaken your time with Axiom Verge for time spent with an emulator of the Super Nintendo. The 16-bit graphics of the game aren’t exactly cutting edge in 2015, nor is a “Metroidvania” game bucking many trends. Many independent developers are turning to retro graphics and some derivation of these gameplay ideas that let players explore freely a game world, gaining access to new areas controlled by the discovery of new abilities or through the use of inventory items. We’ve seen quite a few popular Metroidvania titles such as this in recent years, none so clearly inspired by the source material as Axiom Verge.

Part action, part mystery, the story of Axiom Verge has players controlling Trace who has an unfortunate laboratory accident. When Trace regains consciousness, he finds himself in a world populated with peculiar machines in need of his help and strange hostile aliens. Trace’s journey is about helping these machines face down a threat, and to do it, he’ll need to explore every nook and cranny of the game world, using power-ups to uncover and access new areas, using weapons to defend himself.

The world of Axiom Verge is expansive and interlinked, gated only by your abilities.  The puzzles are clever, the bosses massive.  Players will uncover tools like a drill, which allow you to burrow to new areas. A lab coat, which allows for teleportation through specific areas.  The remote drone allows you to send out a bite-sized sentry to explore places you can’t fit. There are plenty of others, including a device called the Address Disruptor, which exploits graphical glitches in the world. It can be a little much at times.  So many weapons, so many possibilities, it’s up to you to figure out where and when to use these devices to further your progress.  You’ll see things very early-on in Axiom Verge that you won’t be able to access until tens of hours into the game, it’s up to you to remember these areas and return when the time is right. 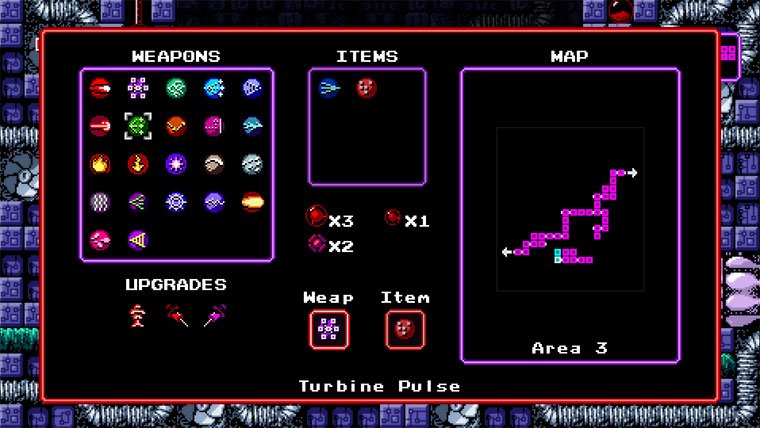 Impeding your exploration progress are a wide variety of hostile creatures and bosses.  Around seventy in total, new creatures litter the landscapes that you uncover, each having strengths and weakness to your arsenal of weapons.  Combat in Axiom Verge is a throwback to an era gone by as well.  Enemies follow distinct patterns, and patient explorers that take the time to learn these patterns will be rewarded with steady progress.   Like the tools and power-up, the weapons that Trace has at his disposal are many and varied.  Some work better than others on certain enemies and bosses, it’s up to the player to discover the right tool for the job. Combat in Axiom Verge isn’t quite as rewarding as the exploration.  Enemies repopulate areas, and when you inevitably get stuck looking for your next path to take, fighting said enemies can get somewhat tedious with little reward for doing so.

The massive world, weapons, and tools are extremely well though-out.  It’s quite remarkable that Thomas Happ put all of these things together on his own.  Each piece fits with one another like one great big interactive jigsaw puzzle.  A second layer for the completionist has a ton of hidden collectibles also strewn throughout the world, that don’t gate the player from finishing, but reveal more to the world in the form of notes and cryptic messages.  There’s an incredible amount of gameplay to be had in Axiom Verge, which you could easily sink 20-30 hours into if you’re looking to see and do all.  On the flip side of that, if you’re into speedruns, there’s an option for that as well.  In this Speedrun mode, random elements of the game are limited, enemies are in their place, and there are no secret areas.  Dialog is also turned off in this mode, allowing players to save as much time as possible. 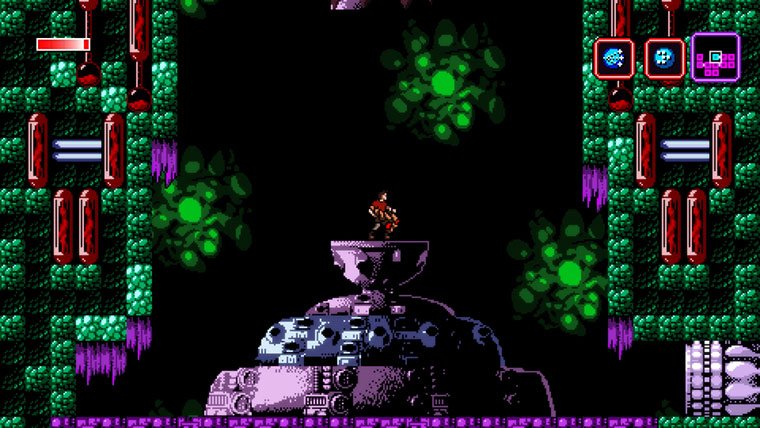 Tying it all together is a mixture of old and new presentation.  There’s no spoken dialog, it’s all text.  The graphics are unabashedly retro, with a few modern tweaks.  For instance, when bosses are defeated and explode into thousands of tiny pieces.  Graphical glitches that may have been unintentional 25 years ago are actually intentionally recreated by the developer and are worked into the gameplay as glitches that the player can manipulate. What isn’t retro is the soundtrack that distinctively themes each area, and is quite varied, giving each portion of the map a very unique sound to go along with the graphical variety.

Axiom Verge is a love letter to another time.  While games from that era don’t impress in terms of visuals any longer, there’s still fun to be found in the exploration and discovery facets of this intricate, well-formed world. Axiom Verge is one of the purest forms of Metroidvania titles that we’ve seen among the slew of games that have jumped on the trend in recent years.  That said, Axiom Verge doesn’t do very much to set itself apart as well.