The latest news in the world of video games at Attack of the Fanboy
October 18th, 2016 by William Schwartz 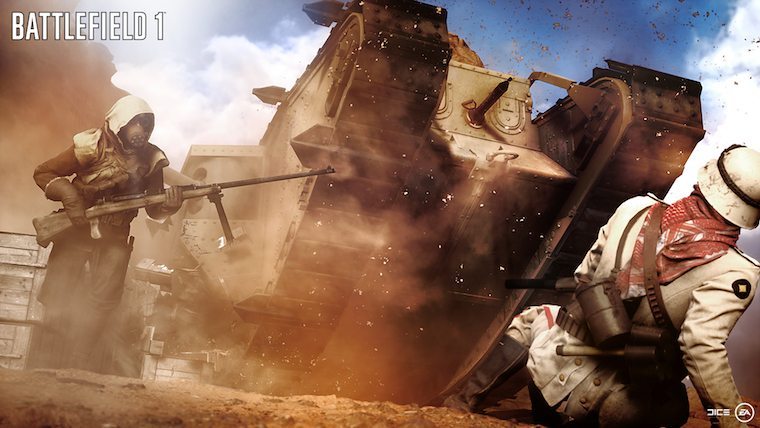 The Battlefield series has been constantly evolving over the last decade.  The series has taken us from the World War II era, to Vietnam, to modern times, and a far-fetched future.  When DICE announced that their next installment in the series would take players to World War I, it was a polarizing move.  Having done such a great job with Battlefield 3 and 4, this new setting was a bold step in a direction that other popular shooters weren’t willing to risk. Backwards.  Their main competition, Call of Duty, still pushing further into the future, Battlefield 1 has a chance to stand apart from the crowd in 2016.

DICE’s new Battlefield game does just this.  The World War I setting is a breath of fresh air for both the online multiplayer and single player story mode, the latter which has seen a huge overhaul in terms of structure.  The former, feeling the more familiar of the two.

While few come to Battlefield games for the campaign, they’ve always been a good showcase for the different bells and whistles that DICE has implemented in their constantly evolving Frostbite Engine.  Battlefield 1 is no different, but they’ve also taken a new approach to story telling in the single player as well, offering players a more palatable offering of Battlefield “War Stories.” These stories take players across the globe, and across the scope of weapons and vehicles in the game.  Five different stories with between 3-4 parts to each, they are certainly a change of pace from the traditional linear narrative structure that most Battlefield games have featured since they started adding campaigns to the game.

Each set of stories has a different highlight.  Three focus largely on the vehicular combat, well four if you count the horseback encounters/stealth gameplay in the Lawrence of Arabia section.  Tanks, planes, and boats all played a role in World War I and they all have a specific story to be told that revolves around them. It’s an interesting premise, maybe not one that is wholly different than what DICE has done in the past, but the way that they are broken into distinct parts allowing you to pick and choose which parts you want to play and when, is.  You unfortunately cannot have it all in Battlefield 1.  With the brevity of these War Stories comes very little time to invest in the characters within.  What’s here is probably DICE’s best effort in years on the single player front, straying from convention, telling the story of World War I from many different aspects.  Whether you enjoy this method of storytelling or not, War Stories is also a great way to get primed for multiplayer in Battlefield 1.

Those who are new to Battlefield are about the only ones that will need that primer, however.  DICE has done very little to differentiate Battlefield 1 from other games in the series, in fact, they’ve even taken a step backwards in some gameplay designs.  Where the Battlefield series has pushed forward over the years with things like destructible environments and the massive level changes dubbed “Levolution” in Battlefield 4, Battlefield 1 doesn’t have any big feature to hang its hat on.  Instead, it’s the setting and era specific authenticity that will either grab you, or not.  There’s a couple of new modes, elite weapons found on the battlefield, and Behemoth vehicles are the brand new additions, which go alongside a wholly familiar class based combat system and fan favorite modes from previous games.

By default, Battlefield 1 feels a lot different to play than its recently released predecessors.  Mostly due in part to the era specific weapons, and the way they are used.  While many line-up with what we’ve used in previous games in terms of what’s available for each class, the weapons themselves have era specific nuance that make them more difficult to use.  Just about everything in Battlefield 1 feels unweildy.  From planes that are much less agile than the jets of previous games, to the slow moving tanks that pale in comparison to those of the modern era, DICE really attempted to hammer home the authenticity for the period.  Guns take longer to reload, and don’t feel quite as accurate or have as much range.  While these things will certainly change the way people play Battlefield 1 multiplayer, I wouldn’t exactly call them a step forward. Sometimes authenticity gets in the way of fun, and it feels like this a lot of the time in Battlefield 1 multiplayer.  Don’t get me wrong, there probably isn’t a better game on the market that requires players to use teamwork in the ways that Battlefield 1 (or any of the last three games) does.  It’s been the selling point for years in this series, and it continues to be the high point of multiplayer.  The class-based gameplay is still the best around, rewarding players who work together with different types of character classes to rule the battlefield.  Despite the authenticity, and attention to detail, Battlefield 1 manages to feel somewhat like Battlefield: Hardline did in that it does very little to stand out on its own. 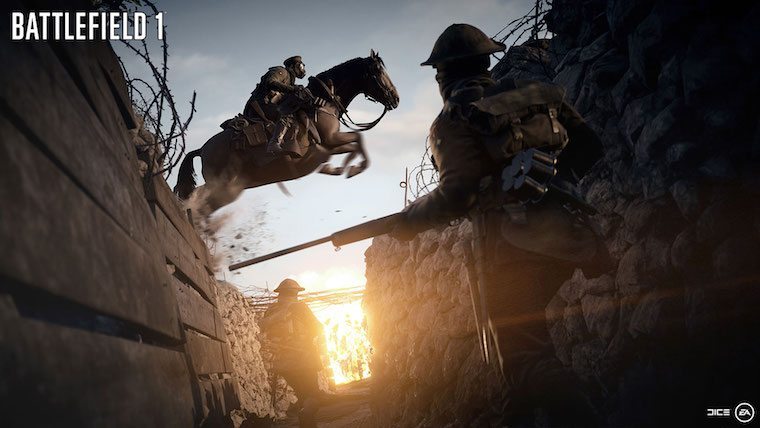 The new additions to the gameplay in terms of the Behemoth Vehicles and Elite Weapons Classes do changes things up in minor ways, but even the former feels like something that DICE already introduced in Star Wars: Battlefront.  Behemoth Vehicles turn the tide of battle in multiplayer matches, and come in the form of flying zeppelins, warships, and an armored train.  These vehicles are map-specific, and given to the team that is losing, in hopes of evening the odds.  They’re not indestructible, but it’s unclear why a competitive multiplayer game needs to lend the losing team a helping hand that is as strong and tide-turning as these Behemoth vehicles.  Sure, it lends for some miraculous turn-arounds, but it feels cheapened by the help that’s been lended to the losing team.  Regardless of where you stand on Behemoth Vehicles, they are a lot of fun to play in.  Who doesn’t want to shoot down on near defenseless enemies from high above or from behind the cover of a near indestructible vehicle.

Elite Weapons also change up the game in small ways by offering different types of power-ups on the battlefield.  Unique kits that only a single player can pick up is the idea here.  These kits are on a timer and range from flamethrowers to high powered rifles, but aren’t quite as devastating as the aforementioned Behemoth vehicles.  They are certainly going to make you more powerful than a soldier with standard gear, but you’re by no way immune to death.  But that’s it, really.  As far as things that have been added to this game, that’s the extent of it — New mechanics in the form of Behemoth vehicles and the special weapons found on each map.  If you love Battlefield and just want a brand new setting, BF1 will definitely scratch that itch almost instaneously.  There’s little learning curve for seasoned players, beyond getting the hang of a handful of new weapons.

Many of the most popular modes return for Battlefield 1.  Conquest, Domination, Rush, and Team Deathmatch are the familiar favorites.  With a couple of new ones added for good measure.  War Pigeons is one such mode, where players must retreive and release pigeons.  Basically a mode which tasks you with findind and killing the carrier.  If you are the carrier, your objective is to release the pigeon with an accompanying note to send word to artillery units.  It’s by no means reinventing the wheel.  Probably the biggest new addition in terms of modes is the Operations Mode.  Operations tries to convey the sense of war on a larger scale.  The game mode spans over several maps, having attackers and defenders wage war on multiple fronts.  If defenders hold a position, the opposing team will recieve reinforcements in the form of Behemoth Vehicles to take them out.  It feels almost like Battlefield’s answer to a multiplayer story mode.  While I suspect that most players will gravitate towards old favorites like Conquest and Rush, Operations certainly takes bits and pieces of these popular modes and melds them into a massive multi-round battle.

Whether you’re already a fan or not, Battlefield 1 definitely delivers.  Visually it’s one of the best looking Battlefield games to date on both the single and multiplayer fronts, with the audio once again top notch as well.  You’re going to have moments in this game that just aren’t possible in other online shooters.  That’s not anything entirely new, the Battlefield series has been providing these moments for a decade.  Previous games in the series do seem more technically ambitious than Battlefield 1, pushing the boundaries of what we thought was possible for a first person shooter that pits players against one another on a massive scale. This time around, that ambition is in going left while everyone else is going right.

A shift to shorter, more intimate stories alongside the impressive visual and audio presentation make Battlefield 1 one of the more enjoyable single player shooters from DICE in quite some time.  While multiplayer is far less ambitious than we’ve seen in years prior, it still scratches that itch for Battlefield fans who crave the chaos and cooperation that only this series can deliver.