The latest news in the world of video games at Attack of the Fanboy
April 12th, 2017 by William Schwartz 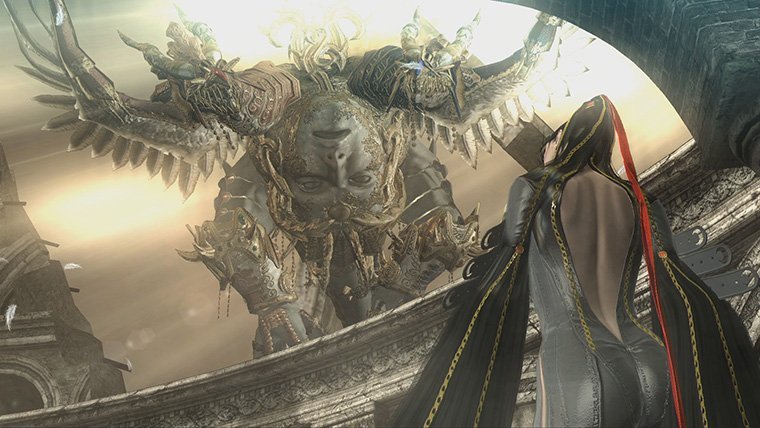 The 2010 release of Bayonetta was a shockingly good entry by Platinum Games.   Hideki Kamiya’s vision for an action hack and slash title starring the titular character, Bayonetta, was praised as the game offered exquisite combat and fantastic presentation in terms of visuals and sound design.  While the game was originally launched on Xbox 360 and PlayStation 3, Nintendo picked up the baton with a sequel for their ailing Wii U console.  PC gamers have been the only ones left out in the cold when it comes to Bayonetta, but not any more.  A simultaneous announcement and release of the game has brought Bayonetta to the PC market and it’s the absolute definitive version of this game, as this is no shoddy port.

The original console versions of the game weren’t perfect when it came to performance, but Bayonetta on PC just might be.  It’s plainly obvious that some care was given to this port, giving PC gamers plenty of options to tweak in terms of visual settings like Shadow Quality, Texture Quality, Anti-Aliasing, HDR Support, 4K Resolution, and more.  For most modern PC gamers, you’re going to be able to experience an incredible looking version of this game, when compared to the original 720p release.  The original Bayonetta, from an art design standpoint, was incredible.  Ramping up the visual capabilities and options with the PC version of the game only accentuate this aspect of Bayonetta.   We can’t speak for every gaming set-up, but our i7-4770K and GTX 1080 was able to handle anything that Platinum Games could throw at it in marvelous resolution and consistent framerate (game is capped at 60fps in action 30fps in cutscenes).  For those that are Mouse and Keyboard faithful, you’ll also be happy to know that Bayonetta supports that as well.  SEGA and Platinum definitely get some points here for being so attentive to the things that PC gamers demand with this port.

Even if it wasn’t perfect in the regards mentioned above, Bayonetta is still an incredible game on its own.  Jumping back into it for the first time in a while, Bayonetta is a joy to play.  The story is over-the-top crazy, the combat is fantastic, and the presentation is second to none.  If you’ve never played Bayonetta before, and have even a relatively capable PC this is the way to experience one of the best hack and slash titles of all time.  Even a better part of a decade later, the combat holds up to anything that’s come after it.  Bayonetta simply is a must play for fans of the genre. 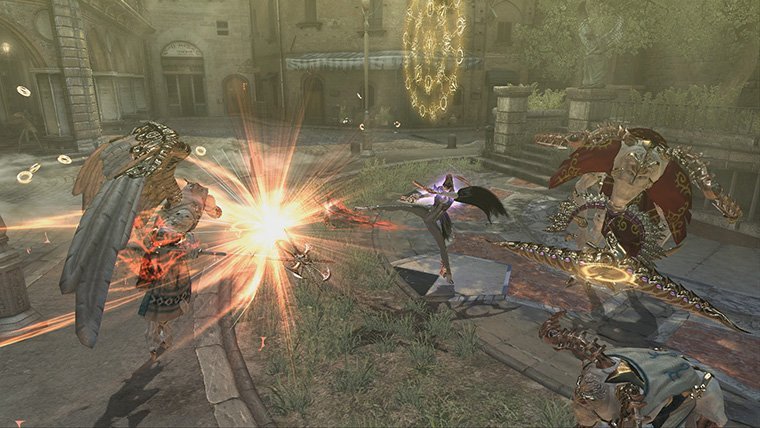 Most of the praise above is for those that have played the game in some form over the years.  What about for those who haven’t yet played Bayonetta?  Bayonetta is basically Devil May Cry at the lofty heights of the series with a layer of style added to that.  It features an easy to learn, hard to master, combat system that allows players to stylishly battle through a story of angels and demons. Players can peform complex combo strings, using melee attacks, guns, and shape-shifting special powers that the heroine learns throughout the course of the game.  Bayonetta’s combat flow is remarkable through all of the options available to players.  Most importantly is how dynamic it is, and coupled with a scoring system that rewards you with medals for each level, it provides good replay value in that regard.

Bayonetta is a trip worth taking again, and again.

The story of Bayonetta is certainly unconventional if not downright weird.  You could say the same about some of the gameplay mechanics as well.  It’s really a story better left to be experienced by the player, but the gist of it is that Bayonetta is a witch who awakens from a 500-year slumber who has no recollection of who she is and what role she plays in a battle between Lumen Sages and Umbra Witches.  She encounters numerous colorful characters along the way as the plot of the game unfolds over its 10-12 hour run time.  You quickly start to learn that Bayonetta has some pretty incredible powers, even if they are somewhat strange.  She wears a suit made of her hair, that she uses to unleash powerful magic to summon demons and dispatch her enemies.  Yeah, it’s definitely unconventional, but it all comes together so incredibly well.

Bayonetta on PC is without a doubt the definitive way to play this game.  Most gaming PCs will run it with great performance, and whether it’s your first foray into this world or your tenth, it’s an adventure worth taking again.