Was it worth the wait? 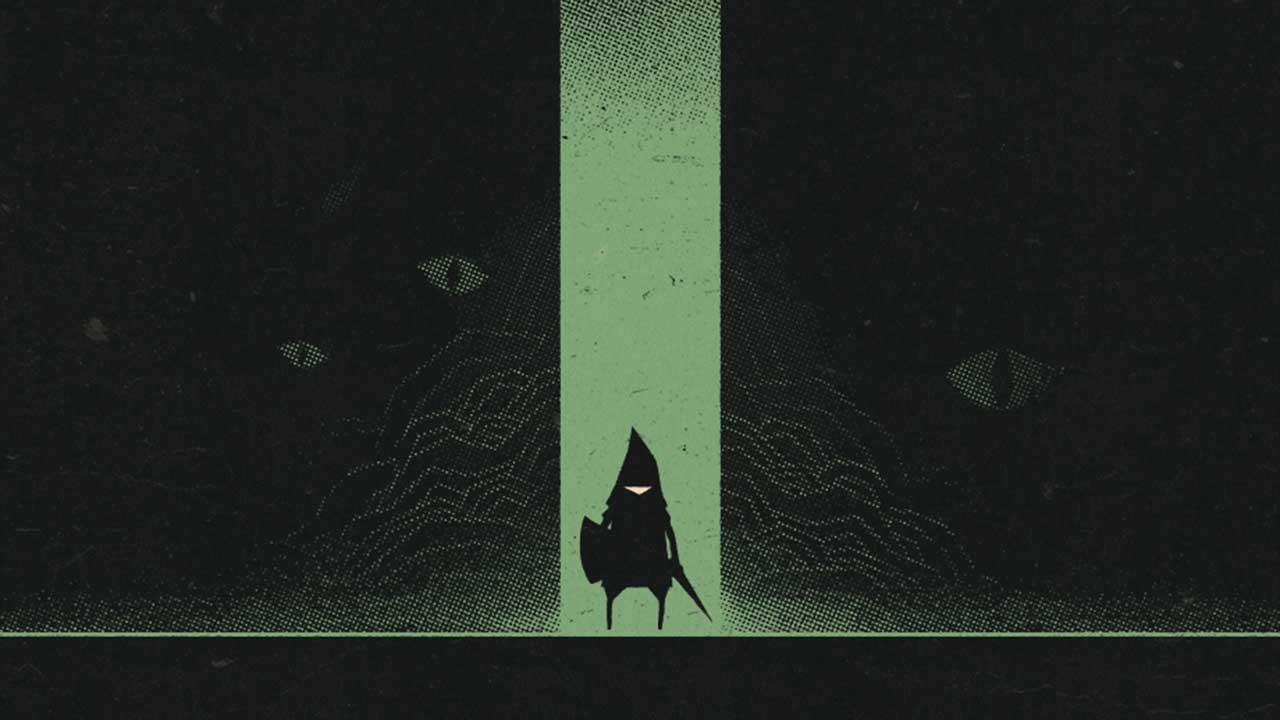 It’s been five long years since Capybara Games announced Below by showing it off for the first time at E3 2013.  In that time, the game has been delayed multiple times, enough so that you started to wonder whether it would arrive at all.   The game seemed to be in some sort of development hell.  There are generally a couple of ways these things can go.  The hype can be so great that the game doesn’t live up to the unreal expectations.  Or, the game can meet or exceed this hype with the developers using that time crafting and polishing something that is worth the wait.  With Below, it feels like the latter is true.

Below is an adventure game that feels like an isometric cross between the old Legend of Zelda games and Dark Souls, with the general rule sets of the modern Rouge-lite.  Despite reminding of the games that may have inspired Below, it certainly stands out on its own as something that feels quite unique.  It’s got a fantastic minimalist art direction and presentation, as well great ambient sounds and music.  Under this impressive exterior is a challenging game that marries a number of different elements, which includes puzzle solving, survival, combat, exploration, and ever-looming fear of permadeath. 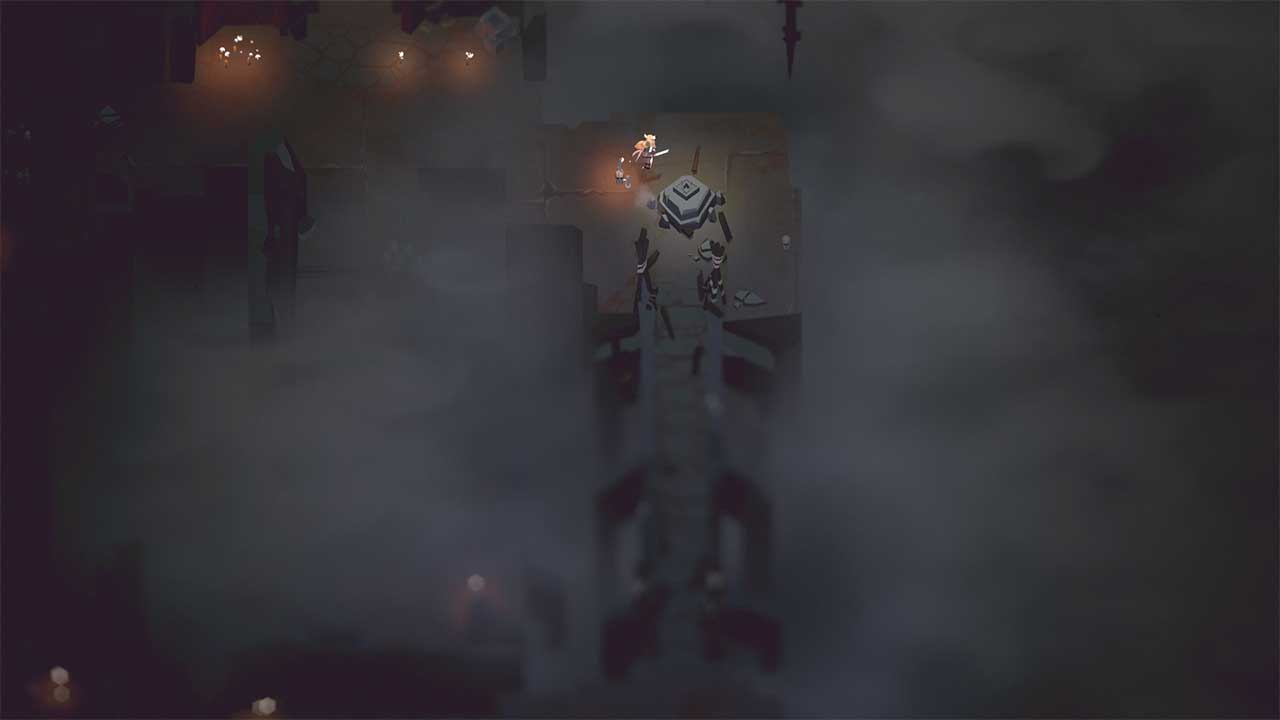 On the story front, Below doesn’t offer much.  Everything is up for interpretation after arriving on a deserted beach.  You’ll simply need to learn how to survive on your own by deciphering the user interface and things that you can interact with. These mechanics include the ability to store items that you find in one run for others, fast travelling, crafting the necessary supplies to stave off thirst, hunger, or cold, and others.  You’ll learn everything in Below by trial and error.   There is some beauty in having that “aha” moment for yourself and figuring out what the game is trying to teach you. Whether that’s opening new paths to new levels by solving puzzles or figuring out that you can store your items that will persist between runs, or finding or purchasing an item that makes a once un-survivable area a walk in the park.  You’re constantly building your understanding of this world.  Unfortunately, if you don’t learn these mechanics quickly there is a lot of time spent for nothing in Below as when you die you’ll lose all of your progress.

Like other rouge-lites it’s a one step forward, many steps back approach each time you play.  The only real progress you make is in unlocking shortcuts from the surface to the different depths below.  As you learn more about the game in terms of the ability to prepare, save items, and defeat enemies you are able to progress further and further. One slip up, however, and you’re basically going back to the beginning of the game.  While this allows you to better prepare for the next run, the initial starting areas aren’t the strongest content in the game after you’ve played them many times over. Until you do start creating shortcuts that’s exactly what you’ll be doing.  When you combine this with enemies and environmental hazards things can get a bit frustrating.  Below is designed to be difficult with this ramping up the farther you progress deeper into the game. 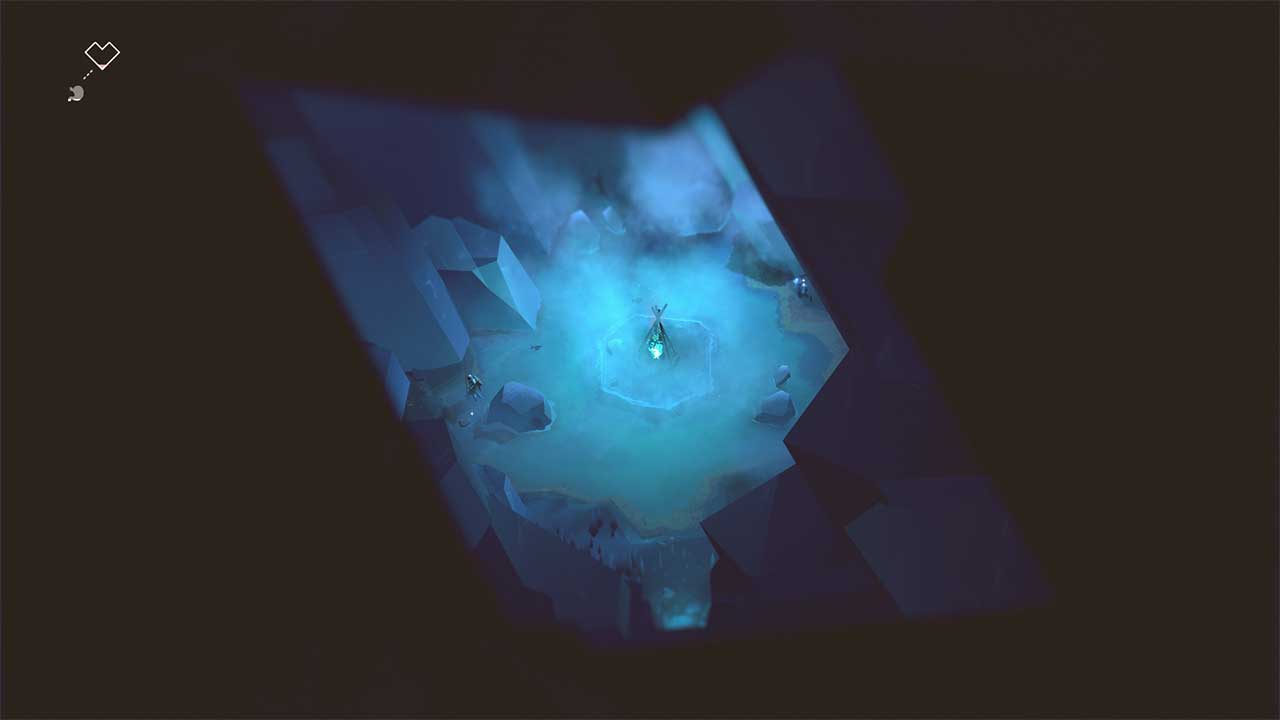 None of below is too difficult on its own.  The combat isn’t particularly challenging. Keeping yourself warm, well fed, and hydrated is simple enough as well.  Where most of the difficulty comes into play is in the battle with yourself.  The game requires that you don’t play too fast and that you don’t play too slow.  You have to keep up a good pace due to the survival aspects of it, but if you go too fast there’s a good chance that you’re going to fall prey to environmental hazards like spikes or other traps.  To make things just a little bit harder as well, each room that you enter has a cloud covering it so that you can’t see what enemies, items, or pathways are inside.  The general layout of Below stays the same, with the each room layout appears to be random.  The only way forward is to explore.  There are some items that can make this exploration a little easier.  A crystal helmet has a light attached to it that will allow you to see a short bit in front of you.  Though you can also readily craft torches or light braziers to guide you or even give you warmth on some stages. You’ll find powerful armor that can help you in the deeper dungeons.  You’ll find winter clothes to keep you warm on the cold levels.  The simple gameplay loop here is to explore, scavenge, survive and progress.  Once you die, you’ll need to start over again.

In your next game you’ll have a couple of options. You can try to track down your corpse, which will have all of the items that you collected on your previous run.  Or, you can just try to stock up on the less difficult areas and make an entirely new run at it.  While many of the items are replaceable.  Some aren’t.  This includes one item that will allow you to progress and unlock areas – a lantern that can be shined to see unique pathways.  With this permadeath feature, Below can have you re-playing large segments of the game over and over again until you’ve reached a point where you’ve unlocked a pathway that will allow you to bypass some lower levels.  Reaching these levels isn’t easy as you are battling with all of the aforementioned aspects, or just trying to recover your items or lamp from previous playthroughs. 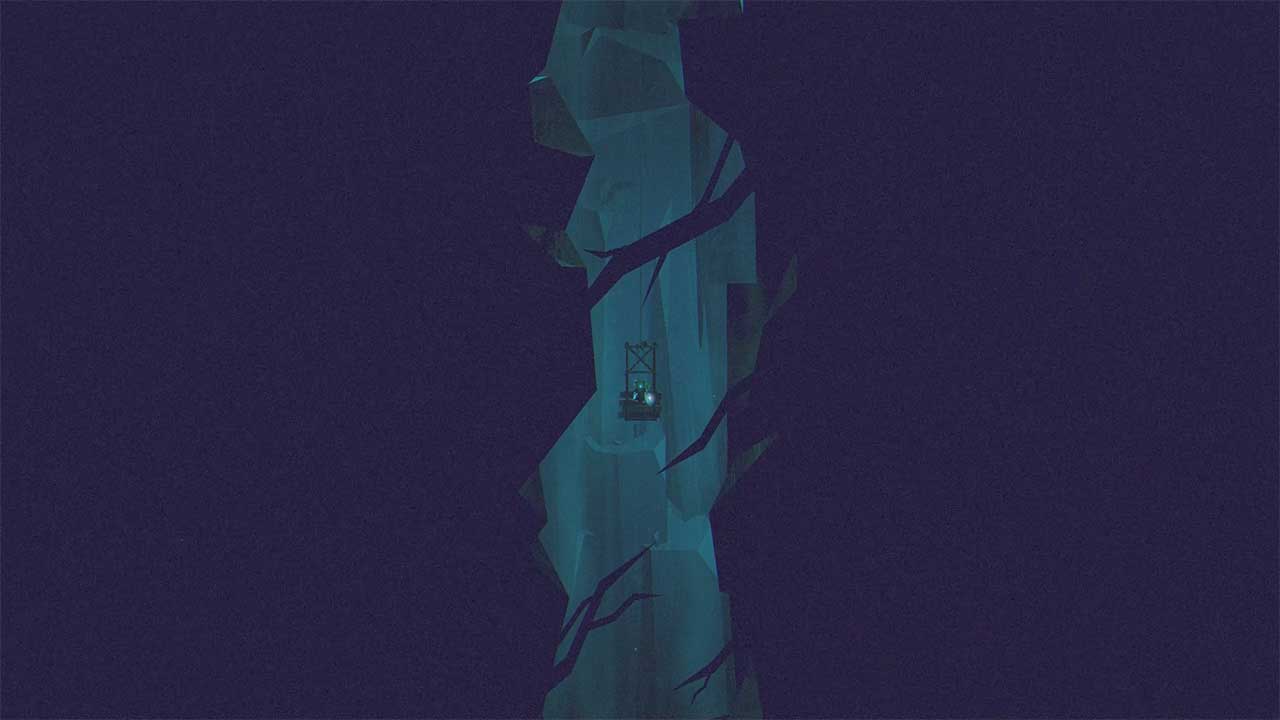 That said, it’s important to know what you’re getting into here.  This is a rogue lite game.  Progress isn’t measured like it is in traditional action adventure titles.  The dangling carrot is that next path to unlock that will allow you to explore deeper.  There are some things that you will learn that will help out immensely here.  The first is the ability to fast travel.  This is done by collecting shards from the enemies that you kill.  Collecting 25 shards will allow you to make a campfire into a fast travel point.  This can either be used in the current game you are playing as a fast travel between two campsites.  Or, you can use this feature to basically warp from the starting area in your next game to this area, assuming you didn’t use it in the previous game.  It can only be used once, either way.  The next is an area at campsites called the Pocket.  This is your home away from home which allows you to store items or the shard currency.  Any item that you store in the pocket can be accessed at a later time.  Take it out of the Pocket and then lose it when you die and it will be gone just like anything else.  The Pocket is an area that you can use to store items and save them for a rainy day.  When you get a handle on these core gameplay features, things can get a little bit easier, but as mentioned above, none of this is explained very well, if at all.

Getting that handle on the game is really just the tip of the iceberg though.  Once you’ve got the basics down Below opens up into something truly special, with an overarching cryptic puzzle to solve and items to find to ultimately “beat” the game.  Below is definitely enjoyable so long as you what it is and what it isn’t.  It’s a challenging game that you’ll need to take some time to explore.  It is not a traditional action-adventure game with checkpoints and clear progression path. There will be many roadblocks in your way in and just how much fulfillment you get from figuring out the small things that will allow you to move further into Below will likely be how much enjoyment you get out of the game.  It is an anti-tutorial game.  You’re not going to get a walkthrough explaining any of the features.  You’re simply left to your own faculties to figure things out.  Despite being inspired by modern games and being in a genre that has seen many, many entries in recent years, Below feels like a throwback to classic adventure games that were both punishing and fulfilling.  The rouge-lite aspects aren’t going to be for everyone, but for fans of the genre this is definitely one not to miss. 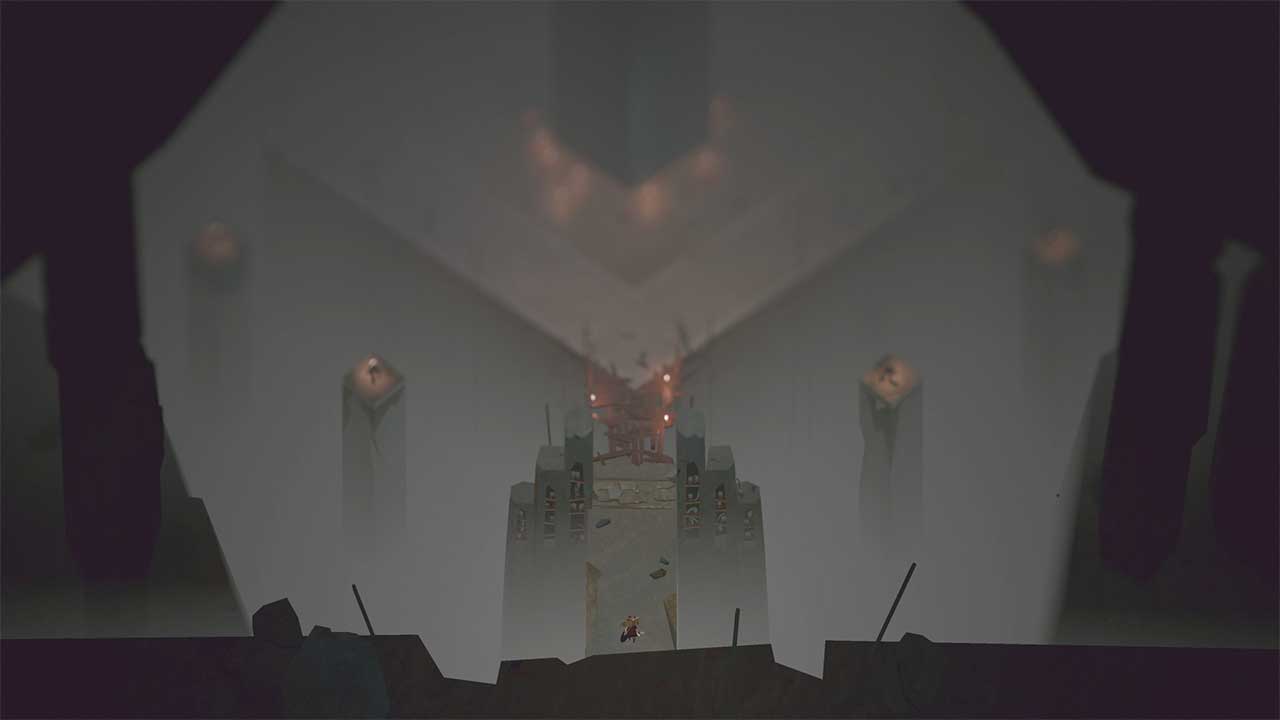 That’s not to say Below is perfect.  The Xbox One version that we tested for this review saw numerous crashes.  One crash put the game into a loop that would not let me play it again until I deleted the save on the Xbox.  Otherwise it would just crash out to the Xbox dashboard upon load.  In-game, there are some minor annoyances as well.  The inventory system and management of that inventory is somewhat clunky, with major oversights to the way that players need to interact with it.  Your inventory being finite, it’s often that your fully stocked with items.  Each time that you come across a new chest that has multiple items in it, you can’t see what all of the items are unless you have space in your inventory.  Making you drop and pick-up items just to see what’s in a chest as you can only see the top item.  It’s kind of a mess.  The inventory problem isn’t something that sucks the fun out of the game as it has a pretty deliberate pace about it already.  The crashing and save problem is much bigger because what happened in my specific first play through had me losing around 10 hours of progress.

Losing that progress did help me see something though.  There is quite of bit of persitent progress that you make in Below along the way that feels incredibly hard the first time and then and much less difficult on the second go round.  Once you figure out the language and systems of the game, it probably isn’t going to be something that you go back for seconds in.  Regardless, that first time is something special.  Learning the systems of Below with little instruction and piecing together the objectives as you try to persevere this brutal landscape is definitely rewarding for rouge-lite fans.

Worth the wait, Below is a Rouge lite that doesn’t hold your hand and asks you figure out the rules of this world on your own.  It makes for a fulfilling, albeit difficult journey.