The latest news in the world of video games at Attack of the Fanboy
October 18th, 2014 by Joshua Garibay 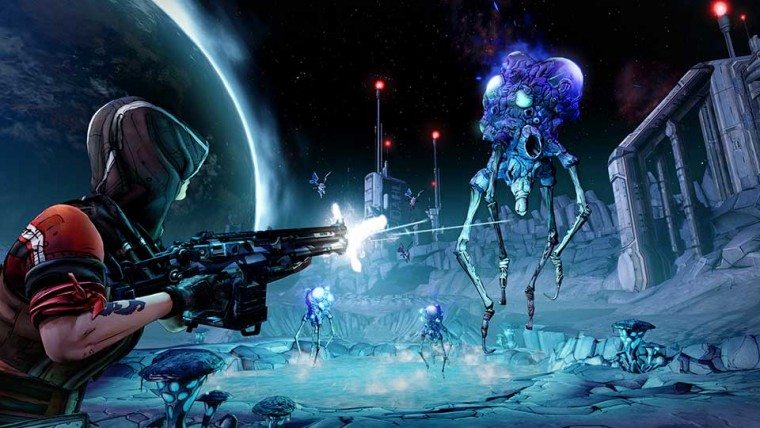 Borderlands 2 contained one of the most enjoyably psychotic villains ever conceived: Handsome Jack. Fast forward two years from its release and you have an entirely new Borderlands experience centered around this maniac’s rise to power, although his beginnings paint him as more of a hero than as the iconic sociopath we all know and love. Borderlands: The Pre-Sequel forgoes the expected “Borderlands 3” in favor of a tale that fleshes out the story between the first two titles, hence its name. Given that this isn’t a full-fledged follow-up to the previous game, we’re left with an entry that’s more about formula tweaks and refinement rather than a meaningful evolution of the series. But when you have a recipe that works well, providing more of the same isn’t necessarily all that bad.

The Pre-Sequel ditches Pandora and takes four new Vault Hunters — Athena the Gladiator, Nisha the Lawbringer, Wilhelm the Enforcer and Claptrap the Fragtrap — to its moon, Elpis. The infamous Handsome Jack has reached out to these previously established characters and employs them as guns-for-hire backing his heroic endeavors. For what purpose exactly, you ask? Jack requires their aid in his mission to take back the Hyperion-owned Helios Station and prevent the destruction of Elpis and its Australian-accented inhabitants. Doesn’t that sound like our beloved, murderous antagonist?

The premise seems solid enough, but the execution left me wanting more. In fact, the Pre-Sequel’s narrative may be one of its most glaring shortcomings. The only real exception is that the characters finally interact with each other through unique dialogue and mission-givers address players by name for the most part. It’s a small touch, but it helps give each player their own personality rather than being called “Vault Hunter” in a generic manner for several hours. That aside, the plot never really manages to fully hook you in or develop in any outstanding way. The series’ staple humor and constant flow of fanservice are what provided the primary driving force through the relentless flow of tedious fetch quests (please, make it stop) and regular backtracking. Have you ever wondered why Jack decommissioned all Claptraps? Or have you found yourself curious as to how some of Pandora’s greatest predators came to be? The Pre-Sequel fleshes out minor aspects of Borderlands 2’s journey such as these, but fails to expand on the universe in any truly purposeful fashion.

Over the course of the 20 hour campaign, this truth was further driven into my head upon realizing that the only memorable encounters with the cast involved pre-existing personalities. Mad Moxxi, Mr. Torgue and Sir Hammerlock marked a few returning favorites. Series newbies Janey Springs and Pickle did little to create a lasting impression. The strengths of the Pre-Sequel are typically found as add-ons to established material and not in completely fresh or new content. For this reason, long-time fans are undoubtedly going to benefit from increased levels of enjoyment compared to newcomers.

Now that I’ve made it perfectly clear that Borderlands: The Pre-Sequel is a game about fine-tuning the experience rather than overhauling it, let’s dive into what’s changed. Elpis, the new setting for your shooting and looting, doesn’t contain the fancy atmosphere of Pandora. Instead, you are left to contend with the cold vacuum of space. Unless you have chosen to play as Claptrap, you are going to need oxygen to remain conscious on the moon’s exposed surfaces. This is where the Oz kits come into play. At first glance, Oz kits look to be nothing more than a replacement for Relics. To an extent, they are. But Oz kits play a much more pivotal role here. In addition to adding character buffs, they supply the main characters with that sweet, sweet oxygen they love so much. To be honest, I had assumed that this feature would end up being gimmicky and annoying when it was first announced. To my surprise it ended up being a great way to shake up Borderlands’ gunplay.

When the Vault Hunters find themselves outside areas containing artificial atmosphere, they have to rely on these Oz kits to get them by. Similar to the way shields work when taking damage, the O2 bar depletes over time while out in the vacuum of space. Fortunately, a fair portion of the opposition needs to fill their lungs with oxygen, too, opening up opportunities to shatter helmets and expose attackers to the brutal environment. O2 pockets are found all over the moon’s surface and enemies drop oxygen tanks with nearly every kill, making it hard to run out. And that’s a good thing because in addition to providing life-sustaining oxygen, these kits allow double-jumping. 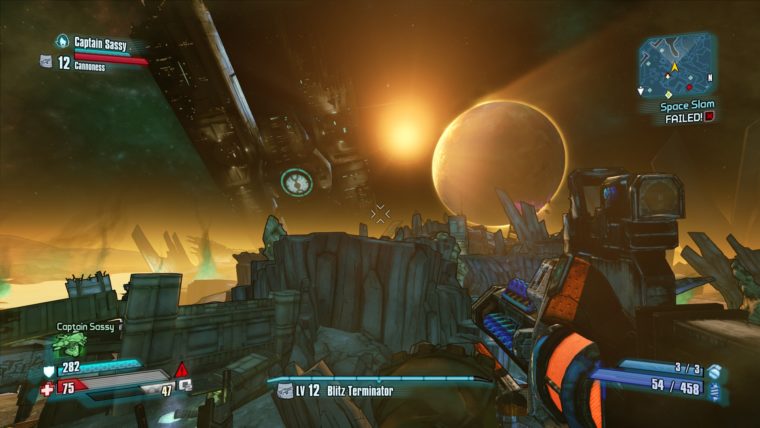 In the typical risk/reward fashion, players can expend some of their O2 in exchange for an extra boost while jumping, opening up the gameplay to an entirely new level of verticality previously unseen in the series. Vault Hunters can use this in combination with the moon’s low gravity to lift themselves onto higher platforms for better tactical positioning, especially for snipers, or general traversal.

Better yet, these four courageous combatants can ascend high above their enemies and rocket down at them using the new butt slam mechanic. It is exactly what it sounds like. You can propel your Vault Hunter downward, rear-end first, and create a shockwave to launch opponents away. Depending on the equipped Oz kit, butt slams can even have elemental damaged applied to them. It may not sound like a whole lot, but you would be surprised at how noticeably it changes the flow of combat. However, the gluteus maximus of your chosen character isn’t the only new offensive option.

It’s hard to believe that it took this long, but Cryo-based weapons are now a thing. Freezing Scavs, Kraggons and other Elpis-residing threats is a fun addition that allows for new strategic approaches. Tough enemies can be frozen solid to focus attention elsewhere temporarily or simply to shatter them into bits. This new element works wonderfully with the devastating inclusion of laser weaponry. Laser weapons come in a variety of flavors, ranging from the sci-fi classic railgun to armaments that seem to mimic the particle beam of Ghostbusters’ proton pack. I found myself sticking almost exclusively to this line of ordnance.

At this point you’re probably wondering when you are going to hear about those four new Vault Hunters mentioned at the beginning of this review. I guess I won’t keep you waiting any longer. Athena, Nisha, Wilhelm and Borderlands poster boy Claptrap comprise the selectable characters in the Pre-Sequel. The characters on offer here are the most varied the franchise has seen yet. Athena plays a very defensive role and doles out Captain America-style justice with her throwable shield. Wilhelm switches up Roland and Axton’s turrets for two mobile sentries, Wolf and Saint, that provide both firepower and healing. Nisha brings back the Wild West with her auto-targeting skill, visually enhanced by the sepia overlay. 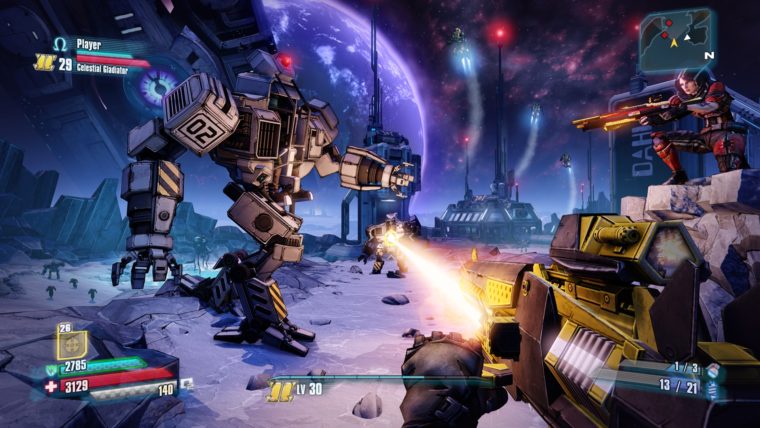 Lastly, we have Claptrap, the lovable dancing robot. His anarchistic design is the oddest of the bunch, which should come as no surprise. Claptrap’s action skill has him loading the VaultHunter.exe program, assigning him a random power. These could be useful buffs or hilarious hindrances. The funniest of the bunch were Rubber Ducky and Torgue Fiesta. The former causes all players to bounce uncontrollably around the environment. The latter forces everyone into a frenzy of tossing limitless grenades from their bodies with the added risk of briefly enabled friendly fire. Selecting Claptrap ensures a completely unpredictable experience and he creates unforgettable moments while playing with friends.

Friends are an important ingredient in this recipe. Borderlands has always been built around cooperative play. Spend any amount of time running the game solo and it becomes immediately apparent. Grinding through areas alone makes the game’s unvaried mission design even tougher to swallow. It’s also worth mentioning that several bosses can down a Vault Hunter quickly, leaving lone wolves with little to no option when in Fight for Your Life. In short, Borderland’s negative characteristics are further amplified without the aid of another Vault Hunter (or three).

At the end of the day, Borderlands fans may just be looking to get more of the same experience. And there’s nothing wrong with that given that the implemented system works well as is. In that regard, the Pre-Sequel delivers. The shooting is tight and impactful and there is a steady flow of loot that will keep you swapping items around in your inventory for hours. A new option called the Grinder has even been included that allows weapons of a given rarity to be mashed up into more uncommon firearms. Moonstone, the Elpis equivalent of Eridium, can be tossed into the mix to craft Luneshine weapons that come packed with extra benefits. So if shooting baddies and hunting for loot is your biggest desire, the Pre-Sequel will satisfy. Just don’t expect to see a reinvention of the Borderlands experience. That will have to wait until the inevitable Borderlands 3.