The latest news in the world of video games at Attack of the Fanboy
April 1st, 2015 by Kyle Hanson 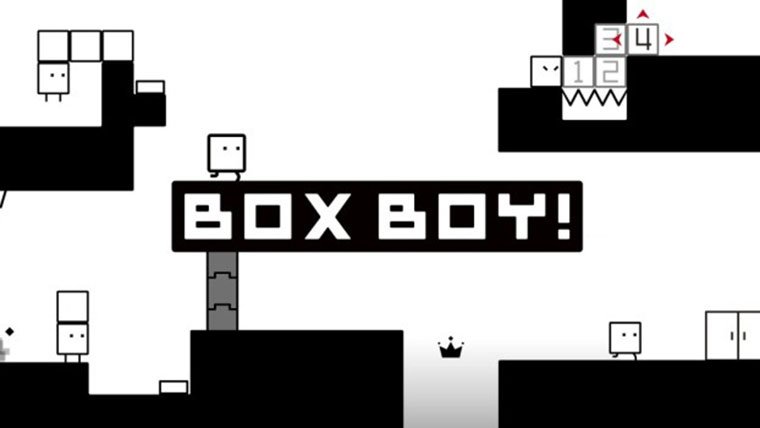 BOXBOY! is one of those games that you can pick up and play any time. A puzzle game that is all about manipulating boxes, BOXBOY! features simple gameplay that can be difficult to truly master. BOXBOY! places you in the role of Qbby, a box who is apparently trying to save the world. Story is obviously not a main priority here as there is almost none of it. You are a box, you make other boxes, and you’re trying to get to the end of the level so that you can do it all over again. Simple, easy, and fun, which just so happens to describe the rest of the game as well.

As Qbby you are able to create boxes, which will be used to traverse the level, solving puzzles along the way. Your entire moveset consists of creating boxes and jumping, yet it is how these simple actions are used that makes BOXBOY! work so well. Each level limits you to a certain number of boxes at any one time, and they all have to be created at the same time, or they will disappear when you try to create another. Upon creation the boxes are attached to you, you can then toss them or simply press down to drop them in place. 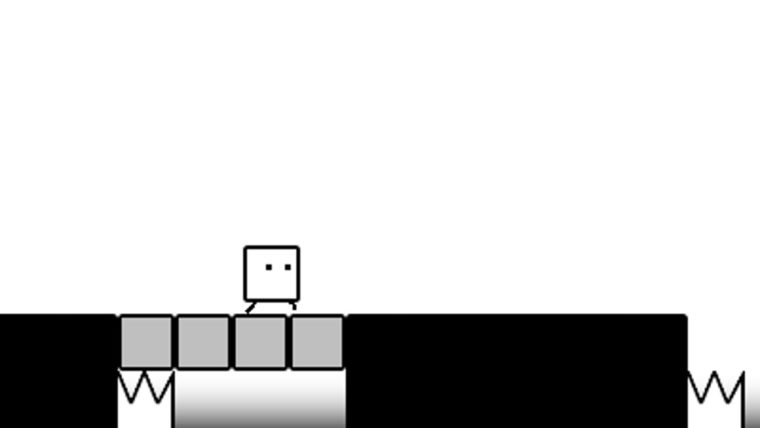 New gameplay elements are largely created through intriguing map design. At the beginning of the game you’ll simply be creating stairs and bridges, but later on things get much more complex. Eventually you learn tricks, such as creating chains of boxes that you leave attached to Qbby. You can then hook them onto edges and retract them to pull Qbby up to the platform. There’s also some Portal-esque mechanics that come into play, creating some truly mind-bending puzzles.

This is classic Nintendo difficulty design and it works almost perfectly within BOXBOY!

One of BOXBOY!’s greatest strength, and greatest weaknesses, is its smooth difficulty curve. Every time a new piece of gameplay or map design is introduced, players are given ample time to learn its intricacies and figure out the best strategy around it. This is great if you aren’t too familiar with the puzzle game genre, but can get a little tiring if you are. Usually, when a new piece of design is introduced they will be given one or two simple instances before opening up the game to use it more often. In BOXBOY! however, each new piece will feature multiple introduction segments and will take quite a while before it is fully incorporated into the levels.

Those who are seeking a deeper challenge can find it within BOXBOY!, but only after a lot of jumping through simpler puzzles. Thankfully, these are still highly enjoyable experiences, so very little was lost by making a more accessible game. Also, for those looking for much more challenging levels there are the optional elements. Each of the 173 levels in BOXBOY! features collectible crowns scattered in hard-to-reach areas. By collecting them all without going over the allotted amount of boxes you will get coins that can be spent in the shop. 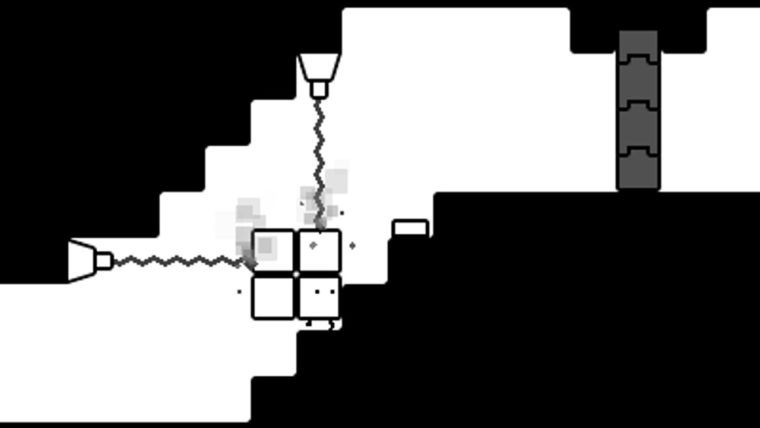 There aren’t too many interesting items in the shop, mostly featuring costumes or songs that can be listened to later on. The one thing that will interest the more hardcore puzzle fanatic are the Challenge Modes. Time Attack and Score Attack feature exclusive levels that were built around using all of your puzzle solving skills. This is classic Nintendo difficulty design and it works almost perfectly within BOXBOY!, it just needed a little bit more push in the main campaign and it would have been flawless.

Another area where BOXBOY! feels slightly mixed is in the visuals. Minimalistic design seems to be the focus here, with stark, black and white visuals and square designs dominating the entirety of the experience. BOXBOY! looks and feels like a game that could have been created on the original Game Boy, but small pieces like the cute and fluid animation reveal its more modern aesthetic. The simplistic visuals actually work extremely well, making for a unique and enjoyable experience, but it would have been great to add in some 3D effects as well. As it is now, the game is wholly presented in 2D, which feels like a small missed opportunity.

Some of the best 3D experiences on the 3DS are of the simpler variety. Having Qbby and the platforms he jumps on up front, with the background fading away would have been interesting and kept the game from feeling like it could have been accomplished on lesser hardware. The music doesn’t suffer like this at all though, featuring some catchy and memorable tunes that sound great on the 3DS.

Any piece that BOXBOY! lacks is easily made up in the charm department. The game simply oozes cuteness and charm, but not in a too in-your-face sort of way. Just watch the way your character’s legs wave when he’s suspended in the air, or laugh at the goofy costumes that are available later in the game. The simplistic design works amazing well with the themes and gameplay, creating an experience that will surely be fun for anyone with even a passing interest in the puzzle genre.

BOXBOY! is a slick, fun experience from start to finish. There are few faults with the game, outside of the occasional feeling that it is holding your hand a little too much. However, you can dive into more challenging areas with ease, and optional collectibles make for a more difficult experience. Minimilist visuals and design combine with excellent puzzle solving gameplay to make a truly memorable 3DS game.