The latest news in the world of video games at Attack of the Fanboy
May 3rd, 2015 by Emily Speight 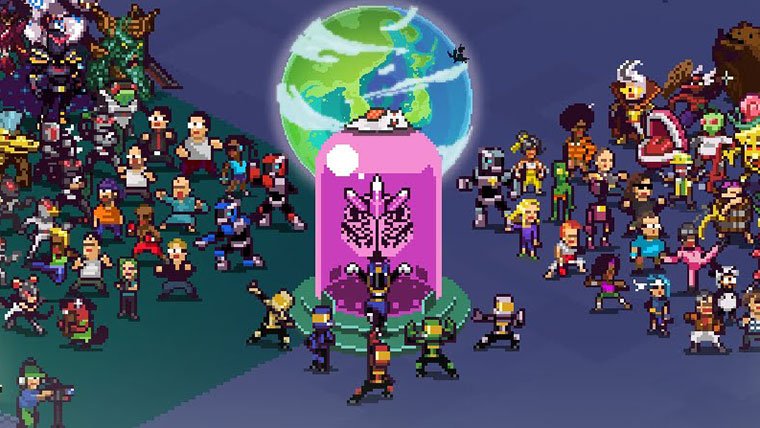 I don’t know if I have ever seen a more effective trailer in my life than Chroma Squad’s launch trailer. It’s a big, old-fashioned singalong to a massively overenthusiastic Japanese song that says very little. If you’re old or young enough to remember Mighty Morphin’ Power Rangers and Sailor Moon, you’re in the demographical sweet spot for Behold Studio’s Chroma Squad. In fact, Saban took such an interest in the game and its obvious resemblance to MMPR that they set out to stop its publication; in the end, Behold Studios and Saban agreed to a royalty share, thus the subtitle on the game’s main menu!

Chroma Squad is a tactical RPG that follows five disgruntled stunt actors who quit their jobs to start a studio of their own. It’s a light-hearted, affectionate send-up of Super Sentai, a series that has run for nearly forty years and formerly produced shows that formed the basis of several seasons of Power Rangers. Chroma Squad also draws heavily from elements of tokusatsu — sci-fi and fantasy shows relying on special effects — in enemy design. Each stage of Chroma Squad involves shooting the action scenes from episodes that your stunt actors produce. This framing angle means that nobody stays in-character for more than a haphazard line here or there. Most parts of each stage are determined by anything but creativity — an early objective prompting you to finish a battle quickly is there because one actor has a dentist’s appointment to get to, for example. This in and of itself is a fun piece of commentary on how limitation can drive the creative process.

Behold Studios seems fond of the 90s. The vibrant, oldschool pixel art used in Chroma Squad is the same style they used in their previous offering, Knights of Pen and Paper. Character and class are also much the same; recycled elements seems to be a theme of the game. Each color of hero corresponds to a class (Lead, Assault, Scout, Techie, Assist). For each color, the player must choose a character from among prospective candidates. Candidates have attributes of their own, so there are obvious advantages to carefully casting each role. 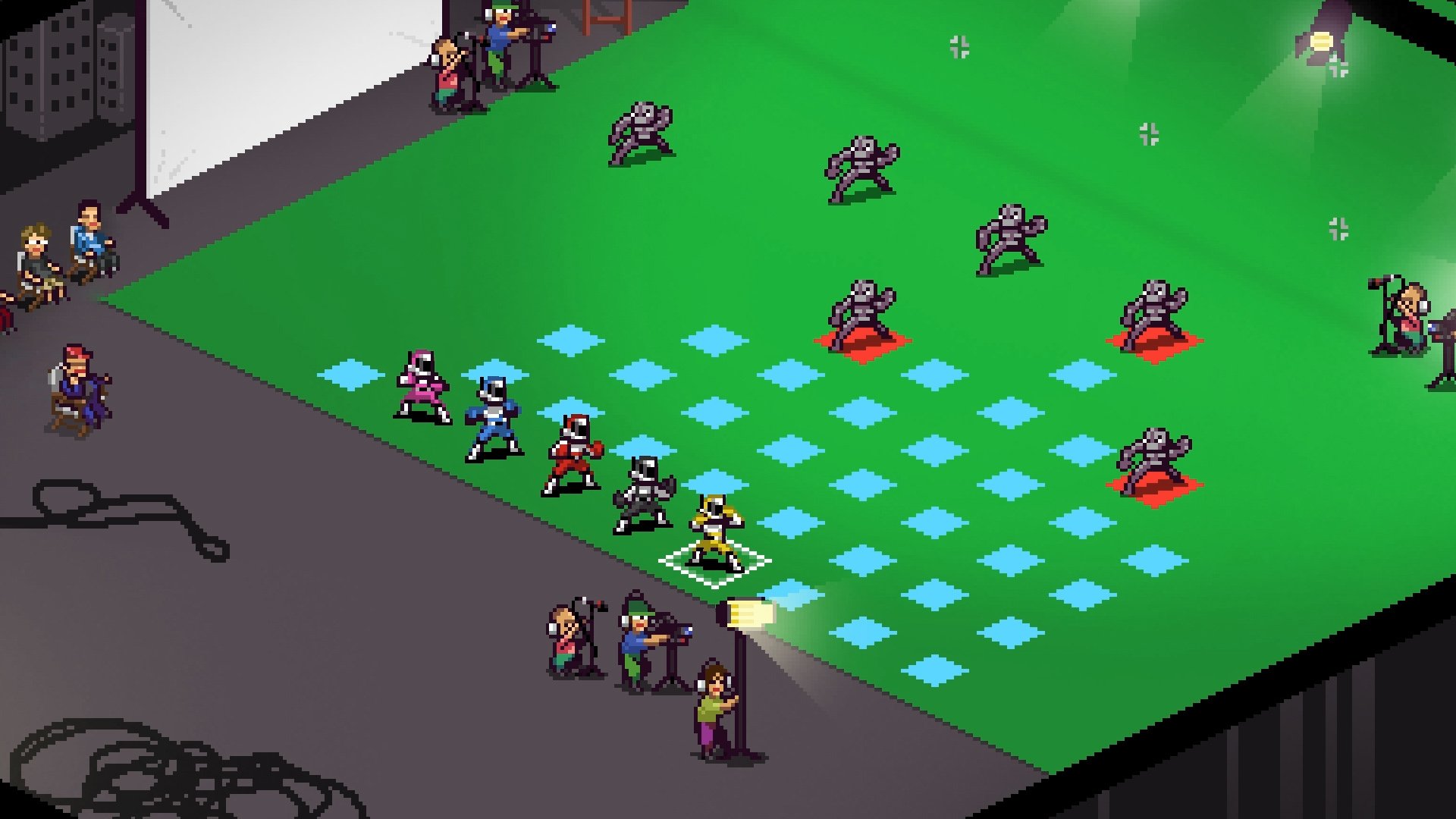 The tutorial does a great job of gradually introducing new concepts to the player. Sets of individual episodes are divided into seasons, which is a neat device to divide the game’s thin storyline and also serves as a justification for the staggering of gameplay elements. You wouldn’t want to waste the mecha’s introduction on early season filler, would you?

A standout moment occurred for me during one of the game’s earliest chapters. Due to a happy quirk of generation, a speech educating my heroes about feminism and media responsibility was given in part to a talking beaver. I laughed through my appreciative surprise. The characters were discussing filming a sequence where they would save a kidnapped girl. One of my heroes had a sister who was dying to appear on the show. Another challenged this — and fair enough, the idea of a damsel in distress is pretty well-worn cliche, even if it wasn’t their intention to tread down that road. 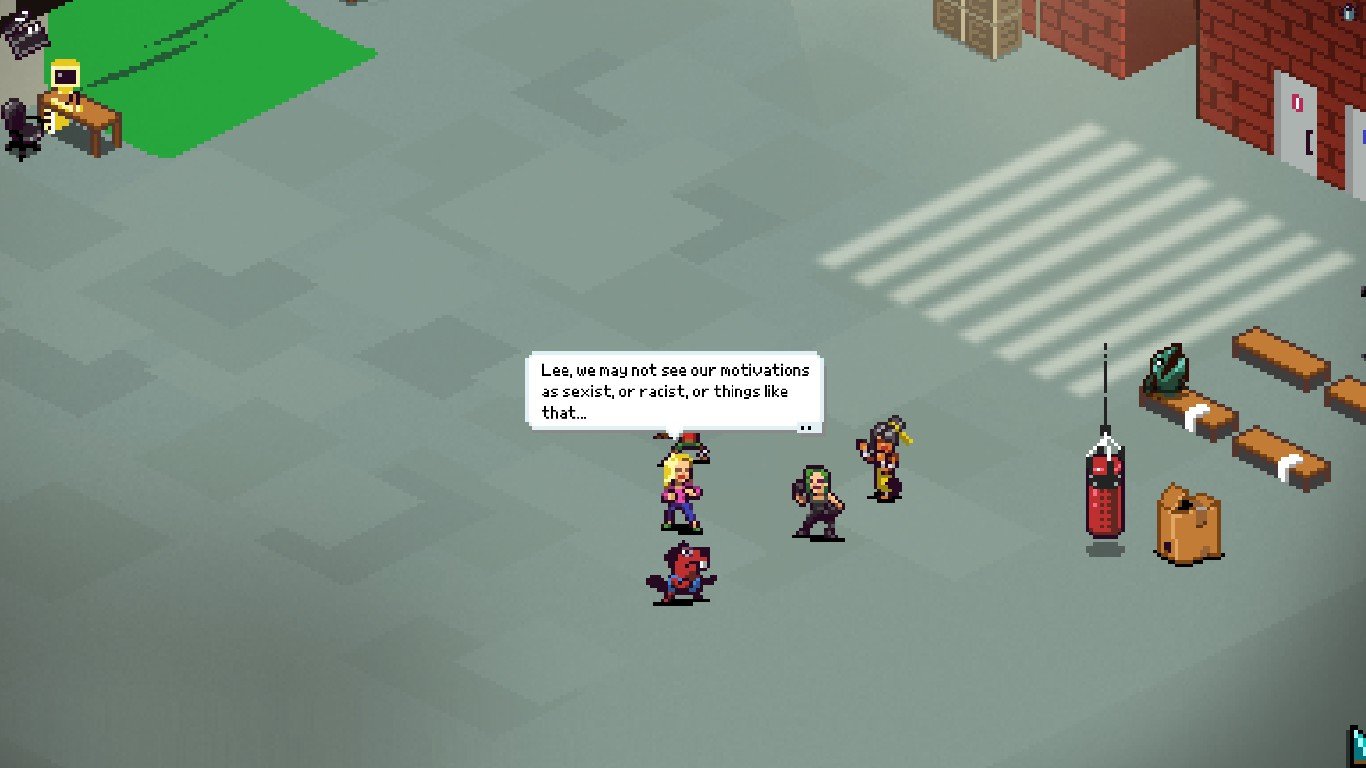 “…but when people watch our shows, they see only what is on the screen.”

After a rousing finish from the Pink Ranger up there, the sister’s husband was given the part instead. After all, it was good enough for James Bond. This is a definite high point in the game’s writing. The nadir seems to occur whenever too many minions are around, as they sneak in references to memes that have been outdated for years. Some of this can be excused by the long delay on Chroma Squad’s release, due to their negotiations with Saban, but in my opinion it really should have been edited out or updated.

Occasionally dated humor aside, Chroma Squad shines outside of battle. The studio management aspect is as shallow as the gameplay, but it still gives the player a sense of ownership over the whole thing. You can customize the various catchphrases you’d expect from a sentai show, which… I got a little carried away with. 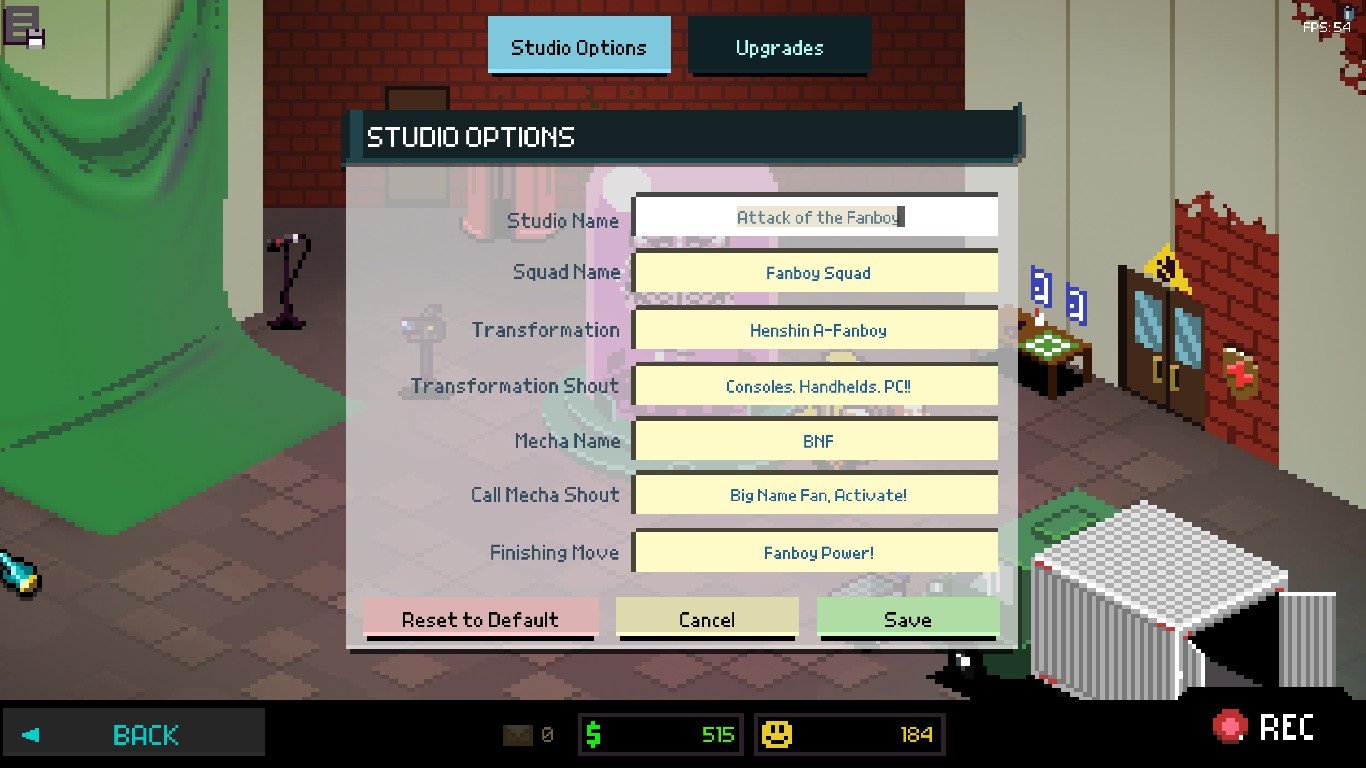 The crafting system is oddly satisfying. Crafting ingredients are dropped by defeated enemies during chapters. These are combined back in the studio for an item with a set effect and a wildcard one as well. Shop-brought items are stronger out of the box, but you’ll want to save your money at first in order to upgrade your studio. The satisfaction comes from combining some duct tape and bits and pieces in order to produce wonderfully low-fi gear. Chroma Squad really revels in the inherent cheesiness of the genre it lovingly parodies, and this love shines through in small details like these.

Although a soundtrack for Chroma Squad is listed in Steam, I found the game’s music to be forgettable — theme aside. It was the only song to pass what I call the Humming Test. It’s serviceable chiptune music that matches well with the game’s aesthetic, but there’s little comment to be made beside that. 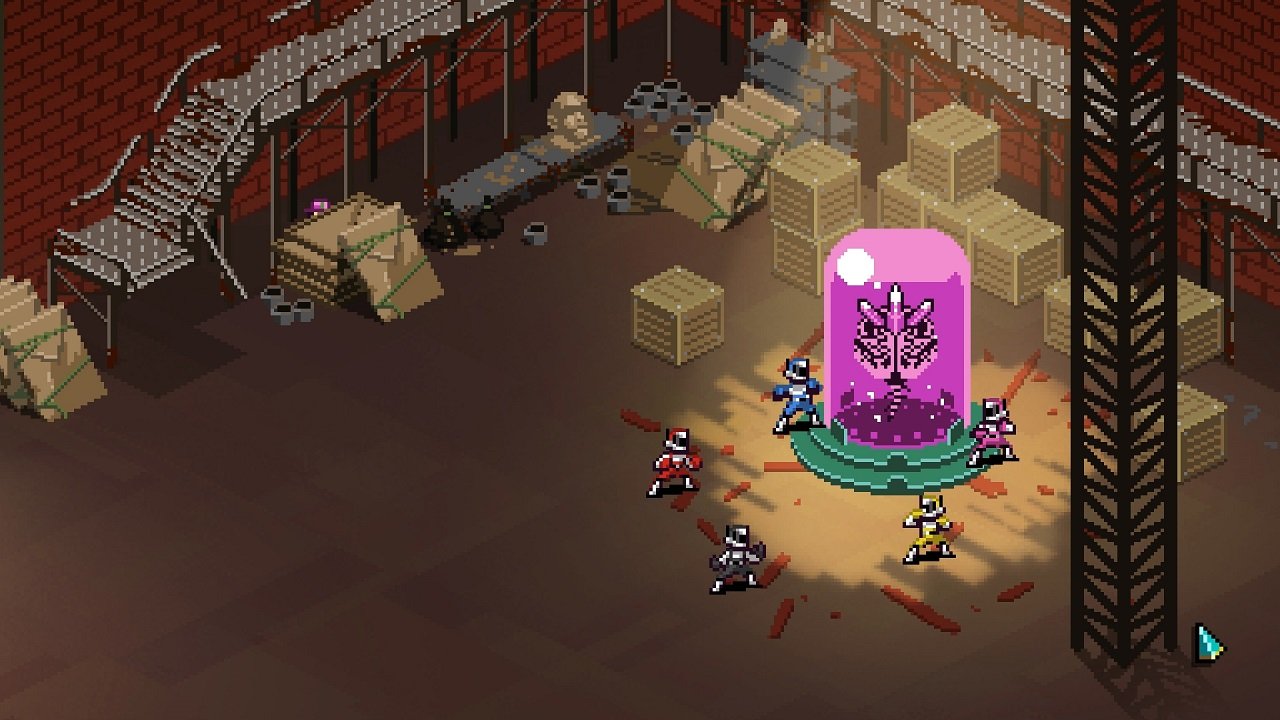 The same can be said for much of Chroma Squad’s gameplay. It’s passable but ultimately forgettable. Although a variety of secondary objectives add some challenge to the game, they are the only serious source. Maps are unvarying and the challenge that enemies present is minimal. The acrobatics mechanic is interesting, and one of the few innovative ideas the game has. Mecha battles quickly lose their novelty and devolve into the same old sequence of timed blocks and hits. Nothing in Chroma Squad seems to have any real teeth in it. It’s detailed and lovingly crafted, yes, but these cannot entirely make up for a lack of substance.

Fairly superficial gameplay and recycled ideas hamper Chroma Squad. The game is saved, however, by tongue-in-cheek writing and an excellent premise. Chroma Squad definitely won’t set the pond on fire but is still enjoyable. Sentai fans and Strategy RPG newcomers would get the most out of it.