The latest news in the world of video games at Attack of the Fanboy
August 28th, 2014 by William Schwartz Danganronpa 2: Goodbye Despair is the follow-up to the previous title Danganronpa: Trigger Happy Havoc which released to western audiences earlier this year in February. The gameplay follows an Ace Attorney like style like its predecessor but adds a few bits and bobs. Does it turn out to be another solid outing for the kids at Hope’s Peak Academy or does it turn into horrible despair?

It turns out it is anything but despair, the follow up is similar on many of the same aspects set forth by the first title. One major exception being that this time around it takes place on the tropical island of Jabberwok. They are brought there by the seemingly good-natured teacher Usami, who also happens to be a talking rabbit. Soon everything is too good to be true and players find themselves vying for their lives as Hope Peak Academy’s infamous principal, Monokuma (an evil teddy bear robot) returns to test everyone’s will. The sixteen students are forced to solve murders of their classmates and if one of them manage to get away with it, they are free to go while the others are executed for getting it wrong. The story is rather dark but still interesting throughout.

The player controlled character is Hajime Hinata, who is suffering from amnesia when the game begins. He is accepted into this very prestigious school and had high hopes before this all happened, but now he is tasked with being the person which the entire story revolves around. Players will need to look for clues to solve murders just like the previous title but they will also be required to interview everyone while looking for the culprit of the murder, analyze the crime scene, and put in order the events that led up to the death. During times when there is not an active murder case, which is referred to as Daily Life, players are encouraged to interact and form relationships with the other students. This helps forward the story and allows the earning of Hope Shards which can be used in the trials, or before to buy skills.

The interactions you have with students are up to the player but ultimately are very one-sided. There is little choice and if you get a question wrong from your would-be friend who is asking, basically if you were listening to them just now or not; there is no consequence. You are simply given the option to ‘try again’ without penalties. It makes the friendship aspect of the game lackluster and feel somewhat tacked on just for a way for players to earn skills. The only real interesting part is finding which presents they like they most. Once you max out friendship with someone you earn a special item and a special skill from them. Hajime can also level up, but also it is just a tacked on feature that you can do in your sleep by walking around and talking to people. Talking to same person over and over begets little, but some XP nonetheless. Throughout the game there are hidden Monokuma portraits that garner ten (10) monobear coins each. You can use these coins to purchase presents to give your classmates or gamble the coins at the capsule machine on the beach for random presents. It’s a pretty neat little thing added and some items can only be obtained via the capsule machine. Another little thing to do while you play is to raise a virtual pet which is located in the menu, you get to see it grow as you gain experience and level it up by walking around in the game. You also are required to look after it and clean up after it. You can even give the pet presents. It’s a cool little thing in the larger scale of everything. I guess it is to help detox from all the horrific things that occur within the game.

During the murder investigation period, which is referred to as Deadly Life, players will be able to gather Truth Bullets which are basically clues. You will have to guide Hajime through the environment and speak with classmates to uncover more clues/Truth Bullets, to bring to the trial. The trial occurs when you pretty much uncover every last clue.

The Case Trial is the largest part of the game as it is where the most ‘gameplay’ occurs. Prior to starting it you are able to set Hajime’s skills with ones that he’s unlocked by reaching max friendship with classmates or purchasing from Monomi (Monokuma renames Ursami). During the trial essentially everyone argues and eventually your turn comes up and you can choose to bring in evidence/clues/Truth Bullets (there are way too many names so, let’s call them Truth Bullets from now on) and the conversation continues amongst the group and usually has breaks with a few different mini-games that are designed to be fun and help the player come to a conclusion based on their truth bullets. 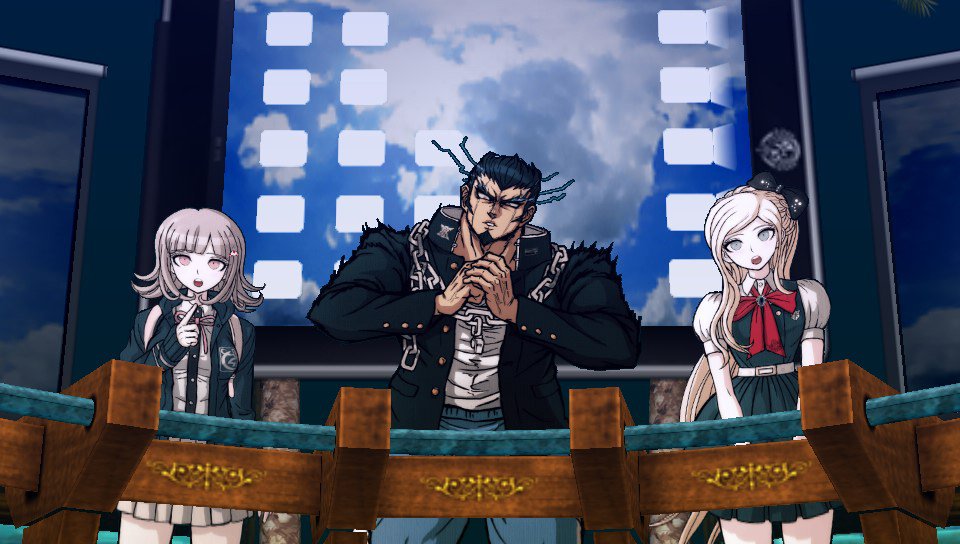 Non-Stop Debate is a sequence where classmates will debate with Hajime on if a previous statement was true or not. Players are required to shoot highlighted words or phrases that are either orange, for being a contradiction or blue for being the truth with truth bullets to back either up. Also you can capture someone’s statement and use it against another person if your evidence you currently have is not enough, which will happen on a few occasions. Another returning mini-game is Hangman’s Gambit which is really just a game of hangman where you are required to shoot at letters with one button into another of the same letter and then use it, you can only use it if there are two or more of the same letter together, however if another, different letter hits into it they both explode and you lose points off your influence gauge. Letters are constantly coming in from all sides so it can be tough but if you know the word or phrase you are looking for it can become much easier than intended. Speaking of the gauges, on top of the influence gauge there is also a timer which counts down and requires you to complete the currently section of the trial in that amount of time, the times are usually quite enough and don’t usually cause a problem.

Showdown’s occur when a classmate has attempted to refute the players logic and is actually quite nice and a cool use of the Vita’s touch screen. It requires players to slice at words the classmate is saying with a ‘truth sword’ meanwhile readying a truth bullet to break apart any incorrect statements or lies the classmate may have. Alternatively, you can also just use the d-pad instead of the Vita’s touch screen, but where’s the fun in that? The mini-game also has a situation where you push the argument to your opponent so far that you have to keep them down by smashing the cross button and you are able to get some words in yourself. It’s one of the cooler mini-games but they don’t tend to last very long. Logical Dive is another new mini-game that has the player control a boarder down a ‘logical tube’ and steering left and right while staying on the path and avoiding pitfalls. Steering is also utilized as a way to choose the answer to questions thrown at you in this mini-game. Simply put, if you choose wrong you fall off and restart at a checkpoint.

The final two sequences of the trial are Panic Talk Action which is a rhythm based mini-game where you have to press a button to the beat of the music when circles appear in front of you, so you can destroy the cornered suspects ‘shields’. Once you do, the usually tend to confess and bam, you found the killer. Shortly thereafter you are asked to do the closing arguments which is just putting together a comic strip that has missing pieces in the correct spots with the pieces supplied to you and then you are able to view the sequence of events that led up to the killers murder. 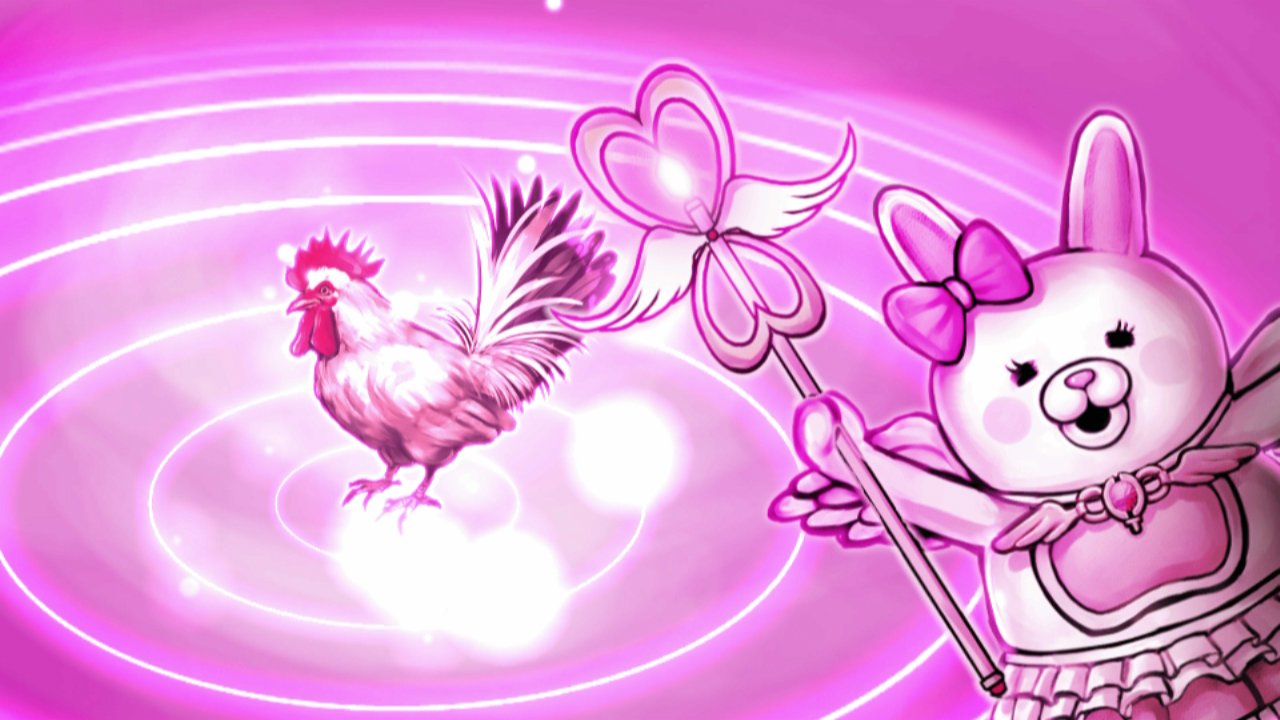 The audio in the game is rather great, it really sets the mood with certain scenes when it is meant to be happy or just unsettling. Graphically, the Vita allows the game to pop with the 2.5D graphics and the primarily anime feel makes it great with all the different colors that the game has on display. Gameplay wise everything just works and it is a fun experience, however I would have liked to see more use of the touch screens. The implementation is still commendable since it is essentially a PSP title remade for the Vita.

Danganronpa 2: Goodbye Despair is great for fans of the murder mystery who also like to have a little friendship and story to back it up. It is an overall fun experience that the only thing that keeps it from being perfect, is that it is essentially a repetitive game. You will constantly go through the same things, over and over. Granted, that is primarily the point but a little variety in there would have been great. It’s a great game that lives up to the predecessor and will likely have fans returning once again to see the truly devious and tyrannical Monobear.