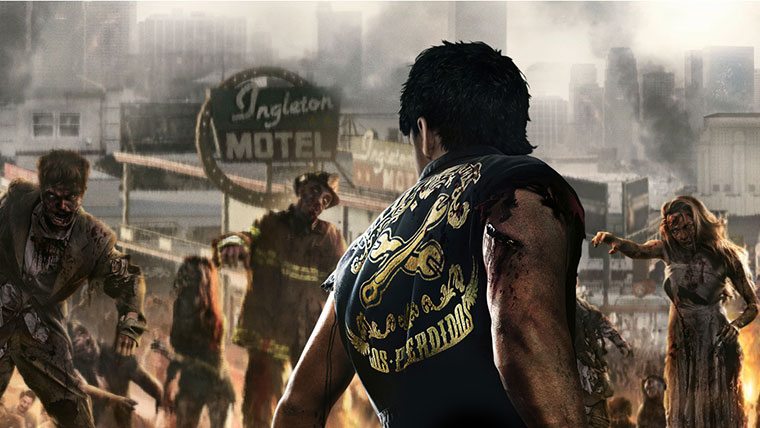 Dead Rising 3 isn’t the best looking game to arrive on the Xbox One at launch, but it sure is the most fun to play.  And while it doesn’t have the cutting edge graphics of Forza 5 or Ryse: Son of Rome, Dead Rising 3 rings in the new generation by putting forth a game that equal to its launch peers, just wouldn’t be possible on the old hardware.

Dead Rising 3 is a survival “horror” game, much like its predecessors.  It couples the tension of the shuffling undead with the comedic relief that the series is known for.  It’s a game about crafting weapons to mow down hordes of the undead.  It’s about displaying hundreds of zombies on screen at one time, to an amazing effect.   Utilizing the power of the Xbox One, Capcom Vancouver delivers zombies by the boatload, the likes of which we’ve never seen before from a game like this, and something that truly gives you an appreciation for the next-gen. 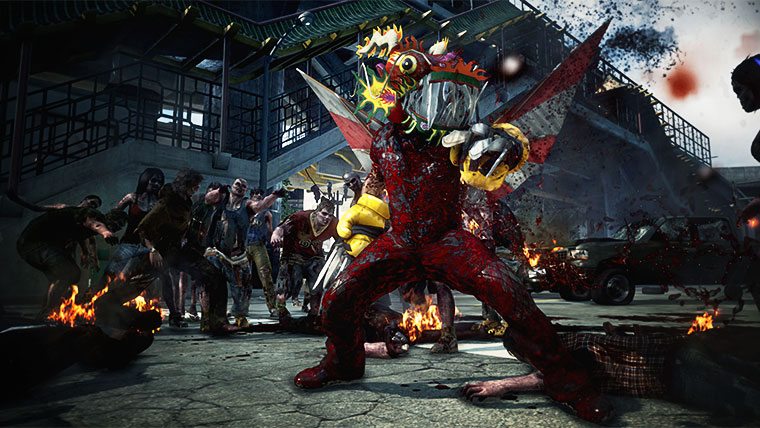 Though as a Dead Rising game, it’s undergone some changes to the traditional formula. Dead Rising 3 is not nearly as constrictive as previous games in the series.  It’s got all the fun with none of the rules.  Capcom’s developers step aside and just let you wreak havok in this open world, with a wide ranging array of weapons to scavenge, craft, and deploy with swift justice.

Taking on the role of earnest mechanic Nick Ramos, you’ll find yourself in the fictional Southern Californian coastal city called Los Perdidos.  A zombie outbreak has the military looking to quarantine the city, and you’ve got a only a few days to evacuate the area.  Twists and turns aside, the objective in Dead Rising 3 is pretty simple.  Clear a path to your sanctuary, and that path will be littered with thousands and thousands of zombies, as well as survivors looking for your help.  The open world is a decent size, but it’s not the open world that’s impressive in Dead Rising 3 — It’s what’s in it.  Los Perdidos is packed to the brim with the walking dead.  There are far more zombies packed into the streets and buildings of the city than we’ve seen in previous games.  So many, that a trip down the wrong alley or a weapon breaking at an inopportune moment can lead to instant death.  The size of these mobs are probably the most impressive thing about Dead Rising 3.  It’s certainly not the best looking game on the Xbox One, but just how much they manage to pack on the screen is an eye-opener when it comes to what the new console is capable of.  And it plays well.  Mashing through zombie hordes doesn’t fall prey to system sluggishness, it’s impressive and hopefully a good indicator of the types of things we’ll be seeing more of this generation. 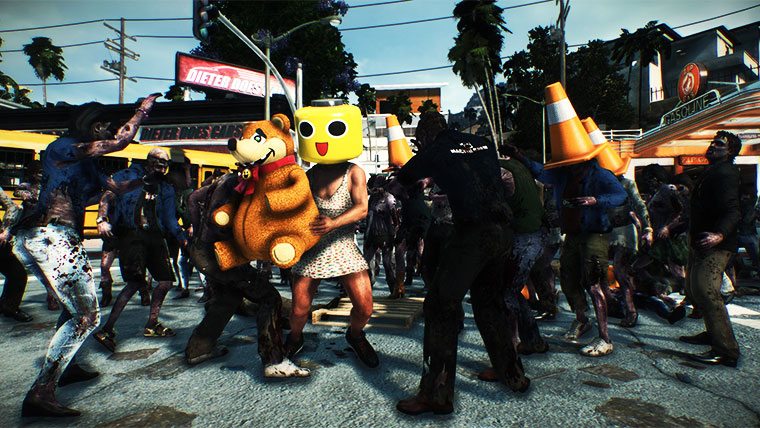 It’s hard not to like the gameplay in Dead Rising 3.  There’s a ton of variety when it comes to how you choose to do battle with the zombie hordes.  There are countless weapons to pick up.  Melee weapons like swords, axes, and knives.  There are guns and grenades, molotav cocktails, and other launchables.  But true to Dead Rising, you can pick up anything to give you some breathing room.  A woman’s handbag, a planter, a gumball machine, it’s all fair game, but it won’t be very effective.  You can craft weapons too.  Blueprint schematics will allow you to craft some pretty imaginative machinery.  Where Dead Rising 2 made you craft at designated tables in the game, Dead Rising 3 lets you craft on the fly.  Like I said, it’s far less constrictive.  This blue print discovery system is a constant throughout the entire game, it makes exploring worthwhile, as that hard to reach shop just might have something worthwhile in it.

Dead Rising 3 lets you play the way you want.  It also lets you create your character to cater to that play style through the game’s leveling system.  Killing zombies and completing side missions will net you PP.  This PP goes towards leveling your character, and when you level up, you get points to spend.  You’ll customize Nick in a number of different areas, that have major impacts on the game.  Add points to your melee attacks, and your weapons will last longer and do more damage.  Add points to your life, and you’ll be able to fight longer against bigger hordes.  There are a number of different areas to add skill points to, it really depends on your personal preferences and play style. The Dead Rising series has always been campy, and Dead Rising 3 is no different.  The story isn’t necessarily going to grab hold of you, but some of the characters found in the main storyline and psychopath side missions are truly funny.  These Psychopath bosses are just regular people who’ve lost their mental capacity in the zombie outbreak.  They fit into the mold loosely of what Dead Rising has offered in this capacity in the past, but aren’t quite as over the top as previous efforts.  They make more sense in the overall scope of the storyline, but remove some of the absurdity from the equation.   When compared to Dead Rising 2, this game has less tension in the overall scope of the storyline.  Each mission feels less important, as you were fighting for someone other than yourself in the previous game.  But it all boils down to the same dumb brand of fun anyway.   However, it’s worth noting that the save system in the regular mode of Dead Rising 3 is more liberal.  This new check pointing system takes the tension down a few levels.  Where some of the fun found in Dead Rising 2 was to barely make it to a save room, Dead Rising 3’s regular mode takes this almost completely out of the equation.  The good news is, that there’s a Nightmare Mode to fulfill your sadist desires.  This adds tougher zombies, and the requirement that you can only save when you track down a dedicated save point (a toilet).

Dead Rising 3’s campaign can be tackled with friends, or anyone for that matter, via Xbox Live.  The game features cooperative play that allows both players to roam freely across Los Perdidos.  This means that there’s no more zone requirements between co-op partners.  You can go anywhere and do anything in co-op mode.  You’ll need to finish a brief tutorial-like section to open up the co-op mode, and it can be somewhat confusing when trying to get a friend into your game.  It highlights some of the issues that we’ve seen with the new Xbox Live party system when trying to play together.  The story plays out exactly the same though.  Your co-op partner will assume the role of Dick, in the telling of Nick and Dick’s Zombie Killing Adventure.   It’s a more enjoyable experience with a friend or talkative co-op partner.  There are laughs to be had, and two swords are better than one. 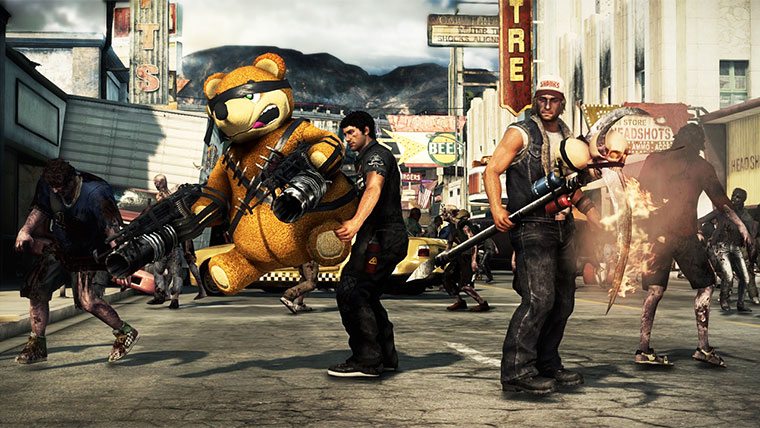 There’s a lot to keep you busy in Dead Rising 3, and it’s a game that definitely offers some replay value when factoring in the online aspects.  In any given play through, you just might not see all there is to see.  Despite the world being not overly huge, there are a lot of areas to explore.  Shops to rummage through for equipment, houses to scavenge for parts and blueprints, there are areas of the game that you just get funneled away from due to the swarming hordes.  Utilizing the Xbox One’s Smart Glass features, and you’ll see even more content opened up to explore.  Missions and additional content will be pushed to your tablet or phone if using the dedicated companion app, it actually works pretty well on the iPad version that we tested.  All the side content, missions, and loot to find is in the name of killing more zombies or making you better at doing it.  Mileage will vary, but if you like the core gameplay of the game, it’ll be hard not to go hunting after all of the game’s secrets.  Checkpoint to checkpoint, Dead Rising 3 is kind of short, but there’s plenty to keep you occupied on the side.

Dead Rising 3 is daft.  It always has been.  Nothing has changed on that front.  You can still put your character into ridiculous outfits, and use wacky weapons to dismember hordes and hordes of undead.  It’s a bigger and less constrictive game than its predecessors.   It’s an impressive next-gen showing worthy of a purchase if you own an Xbox One, and have a modicum of enthusiasm towards either survival horror or zombies.