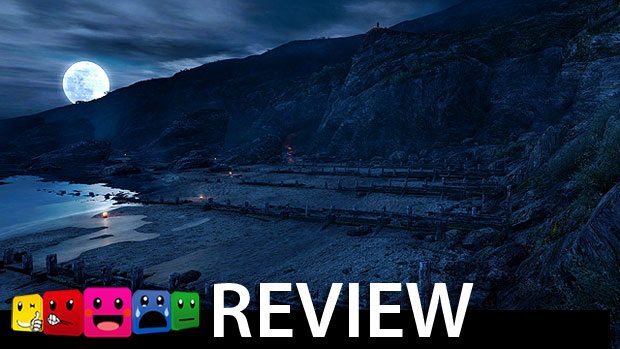 Dear Esther is a narrative driven, first person exploration game made by independent developers, TheChineseRoom and Robert Briscoe. Originally a Half Life 2 mod, still retaining a handful of animations and sounds from the original game, Dear Esther has gone retail to deliver a memorable experience that makes one wonder: can this really be considered a game? The answer is probably not. There is no real goal, except to keep moving, and there are no real set of rules. Therefore, it qualifies as more of an interactive story. While sounding boring, considering today’s market consists mostly of action packed Call of Duty clones, Dear Esther is an extremely important game that, in small doses, can be quite entertaining.

One of the first thoughts one has about this ‘game’ is its extraordinarily beautiful visuals, nearly on par with those of Skyrim. Not that the graphics are necessarily ground breaking (the game uses very two dimensional foliage), but the artistry is absolutely breathtaking and goes to show how the Source engine can still deliver amazing visual design. If the next Half Life game looked this good, I’m sure many fans would be more than pleased with the visual fidelity.

The writing and voice acting is about as engaging and appealing as the game’s artistry, as long as you’re a fan of old English literature. It really requires your full focus, otherwise you might miss a line and may be confused by the narrative later on, which can deter focus from the game’s visuals at times. Thankfully, the narration is very spaced out and doesn’t last very long, striking a nice balance between engaging the player’s interest in the story AND the environment. The ghostly and mysterious narrative is nonlinear and isn’t always easy to follow, until somewhere around the half way mark when the story picks up and the player starts to understand where it’s going to end up. Even then, what exactly the end means is anyone’s guess, but I’ll leave that up to you.

It’s hard for me to declare that I “hated” anything in this game, but there are some less lovable features in it. First off, the price: for a game that takes about one to two hours to complete, $10 might seem a little steep. Also, the game doesn’t involve any mechanics other than walking forward and listening. The game takes care of jumping, crouching, turning on a flashlight, etc. so it’s easy to get a little bored of the lack of action. When I say action, I don’t mean ‘jumping across a burning rooftop’ (i.e. Uncharted 3) or ‘shooting enemies left and right.’ But, allowing for some interaction with the environment or even featuring a character or two in the game would have helped reduce the lethargy that can be induced. However, even when I felt that my interest was starting to wane, the urge to simply explore the world was enough to keep going.

Unfortuately, making the environment more open ended would have made the game feel truly non-linear. The narration occurs in no particular order at times, but the path across the island is pretty straight forward, not permitting the player to take one path to the next location over another thus increasing the replay value from none to a little. Open worlds are difficult on the Source engine, which is nothing new for anyone who’s had some experience designing levels for the Source engine, but Dear Esther appears that it can support multiple paths with great ease, but hardly ever does; and if the game does offer more the one path, it leads to a dead end.

The number one reason to get this game is because it most likely will inspire a whole new genre in gaming, potentially bringing new developers into a more narrative focused direction. It’s understandable to wait for the game to drop a little in price, especially since the developer made a profit in under six hours. However, it’s important to support independent developers and this game, while more of an experimental art project in some respects, is a very worthwhile experience. Don’t expect to be doing a lot though, as mentioned there is no real action. It’s simply “explore, listen, repeat.” So be sure to know what you’re getting into before playing this game, it will probably be better to play for twenty or thirty minutes at a time or else boredom might sink in. In the end, whether you are interested in the technical, visual, adventurous, or narrative aspects of this game, you will not be disappointed. It would be nice to see a few chapters added in the future, but this game is brilliant just the way it is.