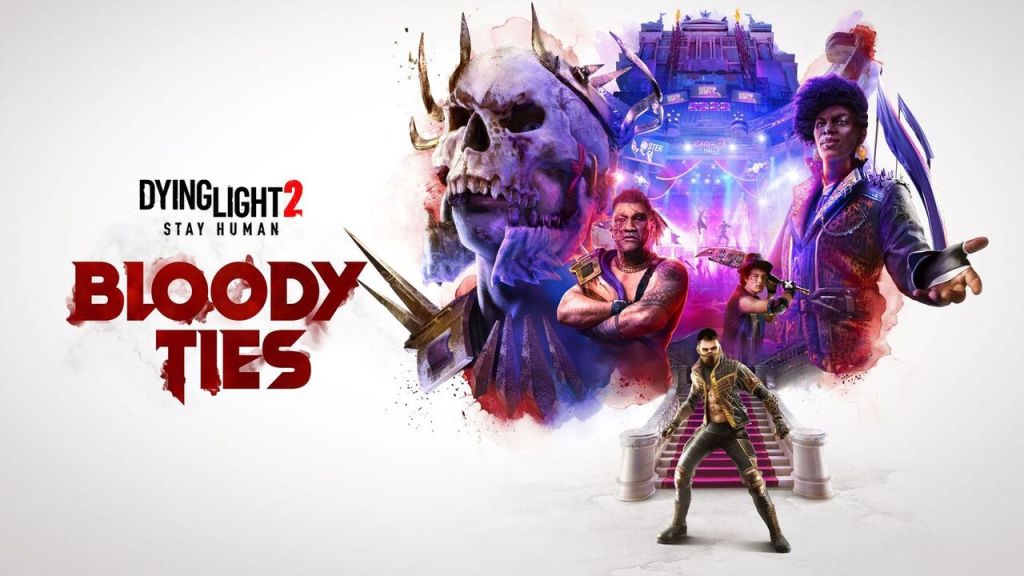 When I finished Dying Light 2 earlier this year, I remember wanting more. Techland had crafted the ultimate parkour playground and stuffed it full of zombies and choice-driven quests, and I wanted more. Despite the issues the base game of Dying Light 2 suffered from, the gameplay loop of leaping between rooftops and slashing through hordes of the undead never got old. Now, the game’s first story DLC, Bloody Ties, gives players a reason to return to the streets of Villedor for more Dying Light action. Fans of the series have been clamoring for more Dying Light 2 since the game’s roadmap was first revealed, and that’s exactly what Bloody Ties is: more Dying Light 2, for better and for worse.

Despite being the first piece of story DLC for Dying Light 2, the Bloody Ties DLC does not pick up after the end of the main storyline. Instead, Bloody Ties is a side story that takes place during the main story of Dying Light 2. It centers around a massive combat arena called Carnage Hall where Aiden inevitably climbs to the top. The DLC isn’t just about a fight club though, since Aiden also gets swept up in some family drama right from the get-go.

It’s just what you’d expect from Dying Light 2 story DLC. There are a few new infected variants, some new weapons, and a string of new quests with multiple outcomes based on your choices throughout the story. That’s the main problem with Bloody Ties, however. It doesn’t do anything particularly new or exciting, causing it to feel repetitive even with its short 4-hour runtime.

There are some new ideas in Bloody Ties, namely the spectacle-filled opera fights that take place in Carnage Hall. These are the core of the DLC, large gladiatorial events where you battle opponents on a themed set in front of a live audience. They’re challenging, letting you get the most out of Dying Light 2’s combat system, but the novelty wears off fast and they quickly start to feel like rote combat encounters.

The family drama that permeates the arena is the real highlight of Bloody Ties, but even that falls short by the time everything wraps up. Things start off strong, with Aiden partnering up with a plucky wannabe fighter named Ciro. Things quickly go south after their first fight together, and Aiden slowly learns the intricacies of his family tree and how it all relates to the fights at the Carnage Hall. It’s a story about revenge and the price of power, and it’s interesting enough to keep you motivated to finish this relatively short DLC storyline at the very least.

If this all sounds really pulpy, that’s because it is. Techland is using Bloody Ties to explore a less serious corner of the Dying Light universe, deviating from the moral conflict between the Peacekeepers and Survivors in favor of a cheesier storyline where the villain is literally named Skullface and you fight in a place called the Carnage Hall. That doesn’t mean that Bloody Ties isn’t a serious story, it’s just a different type of story that serves as a companion piece to Dying Light 2’s overly serious main story.

Of course, Bloody Ties is just the first step of fleshing out the world of Dying Light 2, and the game’s upcoming story DLC packs will most likely explore other corners of Villedor and experiment with multiple different tones. Techland is committed to giving Dying Light 2 an insanely long lifespan with plenty of post-launch support, and that’s one thing that gives Bloody Ties a slight advantage. The base game of Dying Light 2 has seen several improvements since launch, and players who haven’t been diving into the game’s free chapters and events will be treated to a host of enhancements when they boot the game up to play Bloody Ties.

Along with the chapter-specific vendors, which remain in the game permanently after their addition to ensure players can obtain their gear at any time, Dying Light 2 now has new game plus, a photo mode, and plenty of other improvements. Console players now have an FOV slider and a balanced graphics mode that provides the best of both worlds between framerate and picture quality, PC players now have access to AMD FSR 2.0 to boost performance, and the game now has a gritty color grading option to make it look more like its E3 2019 trailer. These are small improvements but they add up, and these under-the-hood enhancements make Bloody Ties feel like much larger of an addition than it actually is.

Ultimately, Bloody Ties is quite underwhelming compared to the base Dying Light 2 experience. It’s not that long, the characters aren’t that interesting, and the combat encounters get stale very quickly. With as strong of an emphasis as Dying Light 2 placed on its main story, I kept waiting for Bloody Ties to make a narrative impact that never came. Still, those looking for a reason to return to the streets of Villedor have finally gotten what they’ve been waiting for. Bloody Ties is a safe, short expansion that gives dedicated Dying Light fans some new stuff to mess around with, but there’s not much to entice other people to dive back in.