The latest news in the world of video games at Attack of the Fanboy
January 27th, 2015 by William Schwartz 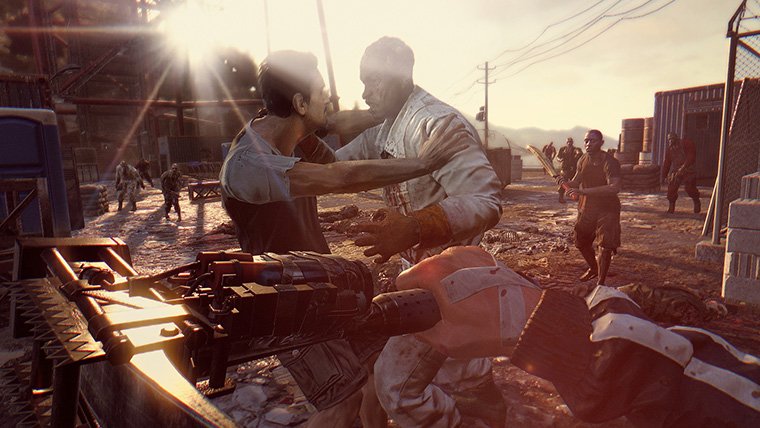 While Dying Light isn’t a sequel to Techland’s 2011 release of Dead Island, it ought to be. If Dead Island was a proof of concept, where Techland taught themselves that an open-world, first person, zombie survival RPG was possible and fun, Dying Light is maturity of said concept. Dying Light is an ambitious game, one that takes this core foundation from Dead Island, and adds flavor from across a number of genres for AAA gumbo. Ultimately, Dying Light is a surprisingly focused and well put together game compared to its predecessor, even if it borrows most of what it brings to the table. There’s a lot that is really good about Dying Light.

It’s got a lengthy single player story, drop-in drop-out cooperative play, and a versus mode that pits player controlled zombies and soldiers against one another in Techland’s dense open-world playground. Dying Light is a refreshing spin on the zombie apocalypse story that’s been told and told again in gaming. Like its predecessor it has a lot of systems in place: a day night cycle that introduces survival and stealth mechanics, a deep crafting and loot system for weapons and gear, and a multi-tiered progression system that allows players to grow as the plot unfolds. Oh, and it’s got an incredibly fun parkour system that allows you to easily traverse the zombie infested world.

There haven’t been too many risks taken with zombie apocalypse games in the past. Dead Island, the 2011 title which Techland also made, had a very distinct flavor though. It’s the clear foundation for Dying Light, though many changes have been made to that formula, and it has been expanded on greatly. Like Dead Island, Dying Light is still not a game that will have you mowing down hordes of infected zombies. It’s a game about survival and stamina management, not a power fantasy. It’s a game where you feel lucky to find or craft a powerful new weapon, items that you’ll use sparingly going forward to give you your best shot a surviving when you absolutely must fight.

Playing as the capable freelance operative Kyle Crane, you are sent in to the fictional locale of Harran on a secret mission to locate sensitive information about the outbreak. Once you touch down, you’re bitten, then brought into the fold by a group of do-good survivors. Crane answers to The Global Relief Effort who sent him to Harran, but the majority of the gameplay revolves around helping this faction who’ve taken him in, avoiding and surviving the sea of zombies, and fighting against a strong force of rebels led by a warlord in the zone. While Techland doesn’t necessarily break the mold with its storytelling, open world mission structure, or delivery of said missions, Dying Light is constantly challenging players to survive in this harsh environment. 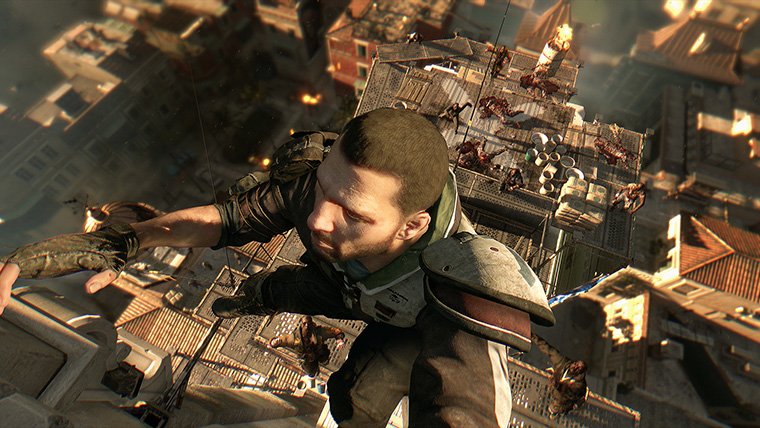 The biggest tool in the player arsenal are the parkour abilities. They give the player an edge on both the zombie and human factions, by allowing quick movements and traversal across the environment. Crane can scale buildings and make death defying leaps all over the massive map, allowing him to get out of trouble quickly. And while there’s certainly many times that you will stand and engage in the brutal combat found in Dying Light, this versatility allows you to outrun just about anything…during the day. 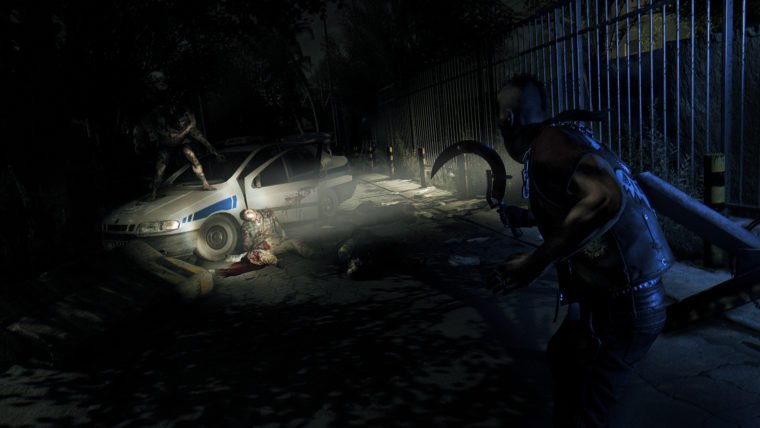 At night on the other hand, Dying Light changes considerably. More dangerous varieties of zombies appear, and its best not to be seen at all by them. Vision cones that are frequently found in stealth games come into play, and if spotted by these “Volatiles” you’ll be in for a fight. Well, not much of one actually. If they catch you after being spotted, you’ll most certainly die. If you do escape, you’ll earn bonus points towards your survival progression tree. Harran is most dangerous at night. Missions are best taken during the day, but many quests will have you venturing out in the dark, or you’ll just find yourself trying to wrap up a quest as the sun sets. The good news is there are ways to remedy the darkness. You can go to safehouses and sleep through the night, venturing out when your chances of survival are better. You can use light traps throughout the city, or a UV ray to get out of jams. Safezones are your best bet, but they need to be secured though, and you can do that at anytime by clearing them of any zombies beforehand. The day/night cycle is one the most interesting mechanics in Dying Light, keeping each day feeling fresh, keeping each night feeling dangerous. 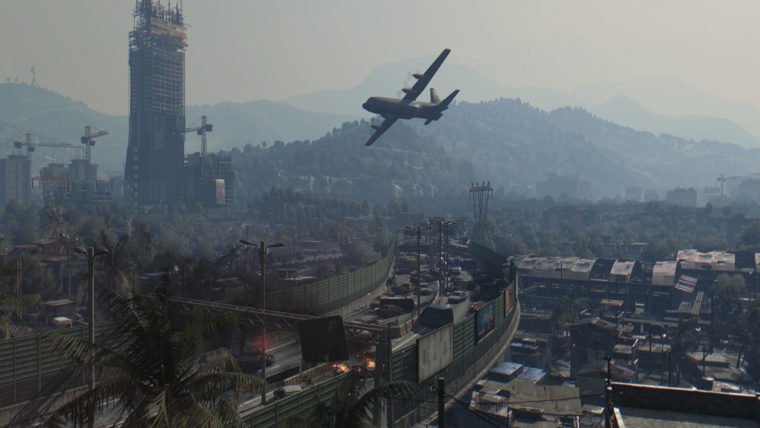 Dying Light is an open-world game though. While there’s a rigid storyline to be followed, you can play it any way you like. You can hit one story mission after another, or you can wander around the city looking for loot if you choose, picking locks, and finding supply caches. You can track down and secure cargo drops before the rebel factions get their hands on them. There are a myriad of side quests to be taken on as well.  There are random encounters, safezones to lock down, towers to climb, and collectibles to be uncovered. There’s plenty to keep you busy in Dying Light. You can do these activities on your own, or with other players if you choose to invite friends to your private game, or open your campaign to the public.

The more you do in Harran, the more you’ll uncover in Dying Light. The more missions you take on, the more chests you open, the more loot you’ll find, the better weapons and equipment you’ll be able to create. The deep crafting mechanics from Dead Island have carried over to Dying Light, though you don’t need pesky workbenches to perform them. There are a ton of melee weapons to discover, modify, and use. There are also quite a few guns to be procured (which make you feel quite OP against zombies when introduced) Blueprints will allow you to make modified weapons that carry specific attributes like electricity or toxicity. Completing quests and activities across the city will also net you experience in three different pools, expanding your skill set depending on the path you choose to spend these improvement points on. Now if this sounds familiar, it’s because just about every open world game follows a similar structure these days. Dying Light does get it right though. It feels focused, accomplishments feel worthwhile and something that build towards becoming stronger and more capable. The attributes and skills that you earn give a strong sense of actual progression. Instead of a map littered with side quests and items to collect that bear no impact on the player or the game, Dying Light feels like everything has a purpose and reason for being there. 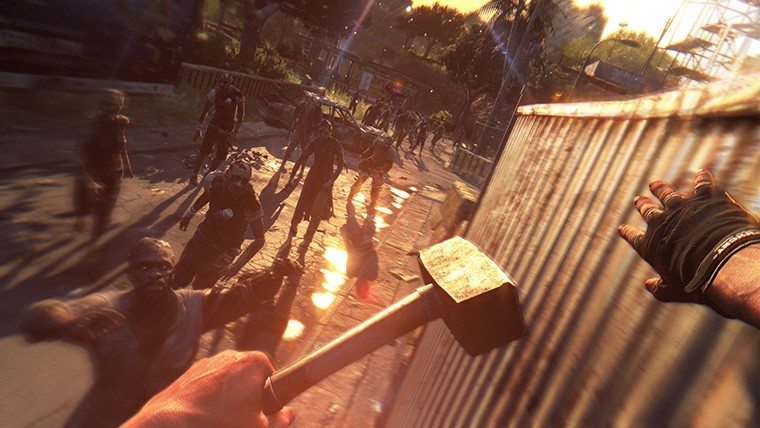 This is the sort of attention to detail that’s found throughout Dying Light. A great presentation, solid gameplay elements like the brutal combat, traversal and crafting .. its cohesive, and carries over perfectly to the online aspects of the game.  In fact, it’s all pretty seamless if you choose it to be.  Opening your game up to the public will allow other survivors to join you, or invade your world as a zombie.  All the aspects of the single player experience are accessible in cooperative play, you can choose to tackle story missions, side-quests, or just mess around.  Occasionally, you’ll also be offered group challenges, which are mix of dynamically created content and quest relevant tasks.  All the while, you’re still building towards your character progression.

Invasions on the other hand are quite different.  Your progress in the single player or co-op story is halted when your world is invaded, and you and/or your team will be tasked with destroying zombie nests.  The problem is, you’ve got a human controlled Night Hunter zombie trying to impede your progress in this asymmetric multiplayer experience.  The zombie is powerful, but you do have counters, like flashing him with a UV light to temporarily make them vulnerable to attack.  The zombie’s overall goal is to deplete the survivor respawn reserves before all the nests are destroyed.  It’s a tense game mode, one that has a cat and mouse feel to it, less dynamic than say, Left 4 Dead, but certainly not merely a check on the back of the box.

Now the bad part about these “seamless” integrations is that anyone can join your world, or invade it.  If that’s not the type of gameplay experience you’re looking for, you’ll want to disable that in the options before they yank you out in the middle of an important mission.

Dying Light is one of those games that could have easily disappointed.  You know the type of game.  The one that has a laundry list of features, none of which really work all that well.  One that has a lot of things that sound ambitious, but never really pan out.  It could have been that game, but it isn’t.  What it is, is a surprisingly well put together open-world survival game with a lot of moving parts, all of which add up to something pretty fun to play.   It’s not going to blow your mind in terms of story, and the mission structure of the campaign is certainly familiar, but Dying Light has cohesion between its parts that make it enjoyable.  The day night cycle, the deep crafting, parkour and brutal combat, Dying Light attempts to be all things to all people, and does a better job than most at it.