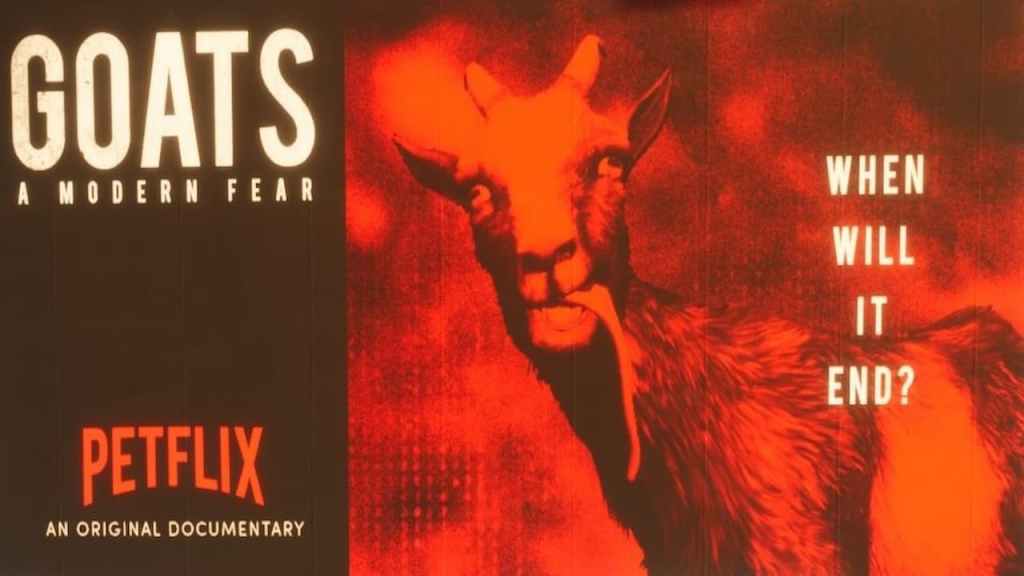 Goat Simulator 3 is a third-person action game from developers Coffee Stain North who made the original Goat Simulator game as a joke prototype for a game jam. You might ask yourself, “Wait, there was a Goat Simulator 2?” which is a valid question. Rest easy, however. The developers are just being trolls with their naming convention.

The announcement trailer shown during Summer Game Fest was a parody of a trailer for Dead Island 2 that was released in 2014. People thought they were watching a remaster of that trailer until Pilgor showed up, and then they realized they goat baited hard. Pilgor 1, Humanity 0.

The trolling by the developers and their use of a parody trailer to announce the game set the tone for their newest entry, and trust me, it does not disappoint. Everyone’s favorite goat, Pilgor, is back, and this time she’s bringing friends with an overflowing basket filled with the best easter eggs.

The Setting – Welcome to San Angora

Goat Simulator 3 takes place on the fictional island of San Angora, which comprises six unique zones. San Angora is 18 times bigger than the original game’s world, meaning there are even more environments for you to explore and cause mayhem. Examples of new zones include a farm named Fairmeadows Ranch, a suburb named Suburbsville, and a big metropolitan city called Goatenburg.

San Angora is populated with semi-realistic residents trying to live their best lives. The mayhem you cause will affect their world in unexpected ways. I was often treated to hilarious shenanigans when I watched the NPCs react to the changes in their world.

The NPCs will also react to you in real-time no matter how small your actions are. My favorite example is when I destroyed an NPC’s sandcastle, and he promptly marched over to a lifeguard and complained about my actions. When they both looked at me, I instinctively hit the Baa button and ran away laughing.

The Story – No Country for Old Goats

Pilgor’s exploits from the original game have made her famous worldwide. The game’s antagonist, The Farmer, kidnaps Pilgor in hopes of using her to get rich. Unfortunately, the Farmer doesn’t know that he just opened pandora’s box on the unsuspecting San Angoran residents.

While the story won’t win any awards, it gives you a reason to complete quests and level your goat castle. The last fight with The Farmer is one of my favorite boss fights from any game because it leans into every genre throughout gaming history.

The game’s lead developer says his goal with Goat Simulator was to create an old-school skating game everyone loved to play as a kid, but instead of being a skater, you are a goat, and instead of doing tricks, you wreck stuff. He accomplished his goal, and Goat Simulator 3 builds on his success.

Learning how to control Pilgor took me a bit to master. Still, once I did, I could control her as the true G.O.A.T. she is. Goat Simulator 3 felt like an old platformer game I played as a kid when I used her traversal mechanics to find collectibles hidden throughout San Angora. Wallrunning on a building like Neo from the Matrix, grinding power line cables and driving a car off a ramp like Evel Knievel are just a few fun ways to explore San Angora.

The game’s physics sometimes led to less-than-desirable effects, but the developers put in exaggerated physics solely for comedic effects. Don’t worry, though. It doesn’t happen often and won’t wear out its welcome. On the contrary, I found myself laughing when I experienced it.

Let’s Play Dress Up With Pilgor

One of the fun aspects of Goat Simulator 3 is the Wardrobe system. Seven different wardrobe slots allow you to customize Pilgor’s appearance. These items include clothing, fur, and horns, often parodies or pop culture references.

However, the best part of the wardrobe system is the items that give Pilgor special abilities that help you navigate San Angora, complete quests, and find collectibles. For instance, my all-time favorite item is the Channitatium Shield, which cracked me up beyond belief once I realized how punny the name was.

Of course, you can also change your goat type, by transforming Pilgor into animals like a Giraffe or Hammerhead Shark, which doesn’t make much sense, but hey, let’s not question it. Have fun running around San Angora as a Rhino.

I scoured San Angora for easter eggs long after I completed the main story because Coffee Stain North incorporated them into the game so well that you will constantly find them without meaning to. I still find new easter eggs with every play session, which is impressive. Examples of easter eggs include playing The Imperial March using church bells, returning the Ring to Mount Doom, and enjoying a concert at the Distopia music festival.

Easter eggs aren’t the only things inspired by pop culture references. Many of the game’s mechanics were inspired by popular video games and movies from our past. For example, a secret level called the Cellar of Doom will teleport you to a Wolfenstein 3D-inspired level.

My biggest issue with Goat Simulator 3 at launch is its new multiplayer mode. Goat Simulator 3 offers online and split-screen four-person cooperative so you can explore San Angora with friends. The only problem is that the game does not support cross-play. Goat Simulator 3 is also a next-gen-only game, which means you and your friends must play on the same console version.

While this may frustrate players who love playing games with their friends, this doesn’t lower my opinion of the game. Coffee Stain North has lovingly stated that they may come out with additional multiplayer features in the future, but do not hold your breath.

I ran into zero bugs or game-breaking issues during my long play sessions of Goat Simulator 3. None of the quests, wardrobe items, or open-world aspects had any issues. I experienced no performance issues when running with the highest graphics settings. There is no reason to believe that Goat Simulator 3 will have issues on next-gen consoles. I was not frustrated with any aspect of the game, which surprised me.

I enjoyed playing Pilgor when completing quests and finding collectibles in San Angora. The icing on the cake was the ability to dress her up in fun wardrobe items while trying to squeeze every easter egg out of the game like I was a Gunter from Ready Goat One. I experienced no bugs or performance issues which is rare because they so often plague games at launch. Goat Simulator 3’s story won’t stick with you forever, but the gameplay will. Major AAA video game developers should note the game’s successes, but it wouldn’t matter because Pilgor would eat them, anyway. You will enjoy Goat Simulator 3 if you love open-world exploration games set in a world that doesn’t take itself seriously.