Time to flex those thumb muscles and don your spandex. The Mexiverse is in trouble again! 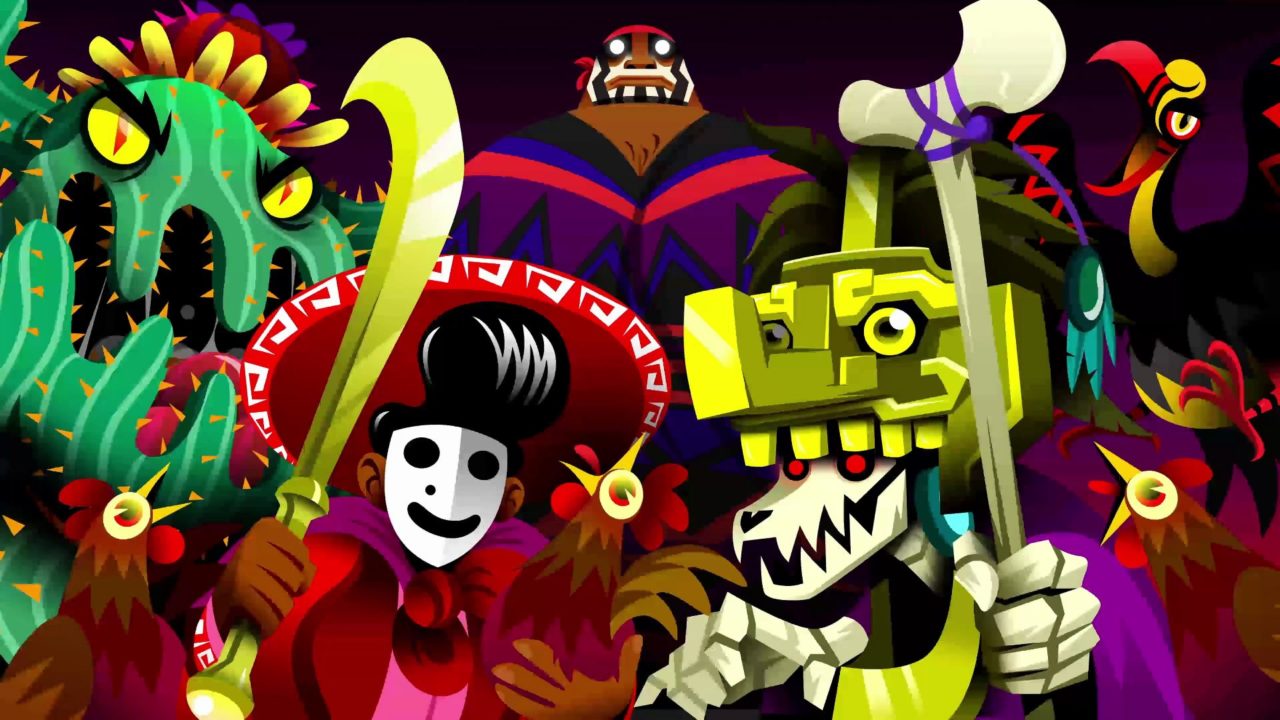 Everyone’s favorite agave farmer, Juan Aguacate just can’t catch a break. After the love of his life was kidnapped in the first game by the evil charro skeleton, Carlos Calaca, he went through hell and back to save her. Drinkbox have now pulled him from his calm domestic life to once again save the world, well, the Mexiverse, from doom.

Guacamelee! 2 is here to punch, suplex, and pollo shot a smile from your dial with Drinkbox’s latest Metroidvania style platformer / brawler.

Anyone who has played their games know Drinkbox Studios’ style is impeccable. From the absolutely brimming-with-charm character designs and astonishingly clean, yet funky animations to the flawlessly designed levels, Guacamelee! 2 stands proud as the champion of their efforts. Each location absolutely bursts with personality. Subtle 3D lighting brings the 2D diorama layers to life and it’s all tied together with strong and thoughtful palette choices. I cannot pour enough praise onto how this game dropkicks your eyes with joy. 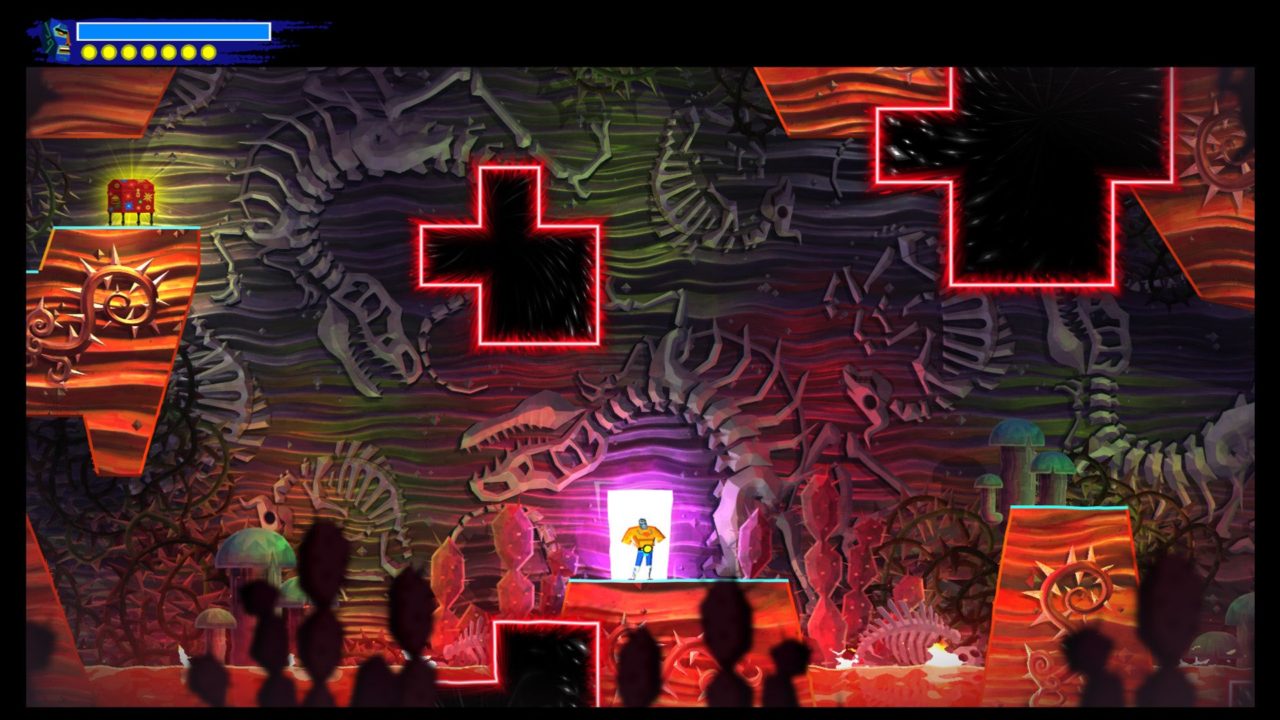 And of course it runs smoother than well-made guacamole. No matter what is happening on screen, nor how many enemies Drinkbox throws at you, and trust me, they throw a lot, the game doesn’t skip a beat.

The Mexican-inspired music and sound effects return in force, bringing the Mexiverse to life. Each level echoes its visual personality and every jump, punch and kick are backed by excellent effects. These all work together to inform the player, helping you navigate some of the more punishing levels.

And holy enchiladas can they be punishing.

Fortunately Juan can jump, double jump and cling to walls, allowing him to leap about the levels to get to new, hidden and secret areas. As you progress you will pick up coins, which allow you to buy upgrades. You’ll also unlock mask pieces, increasing your stamina as well as heart pieces to boost your health meter.

New moves lead to even more areas and enemies. This time, there is also more chicken love and you can spend a huge chunk of the game as one. Some areas are too small for Juan to squeeze his muscles through or require the chicken’s amazing abilities to access. There are also enemies with shields only the chicken can break through, forcing you to utilize the form much more than the original did. By the end of the game it was my favorite aspect, not only because combat is far less frustrating as a chicken but also because running around as one, particularly in the specially designed levels, reminded me of the glorious Mutant Blobs Attack. 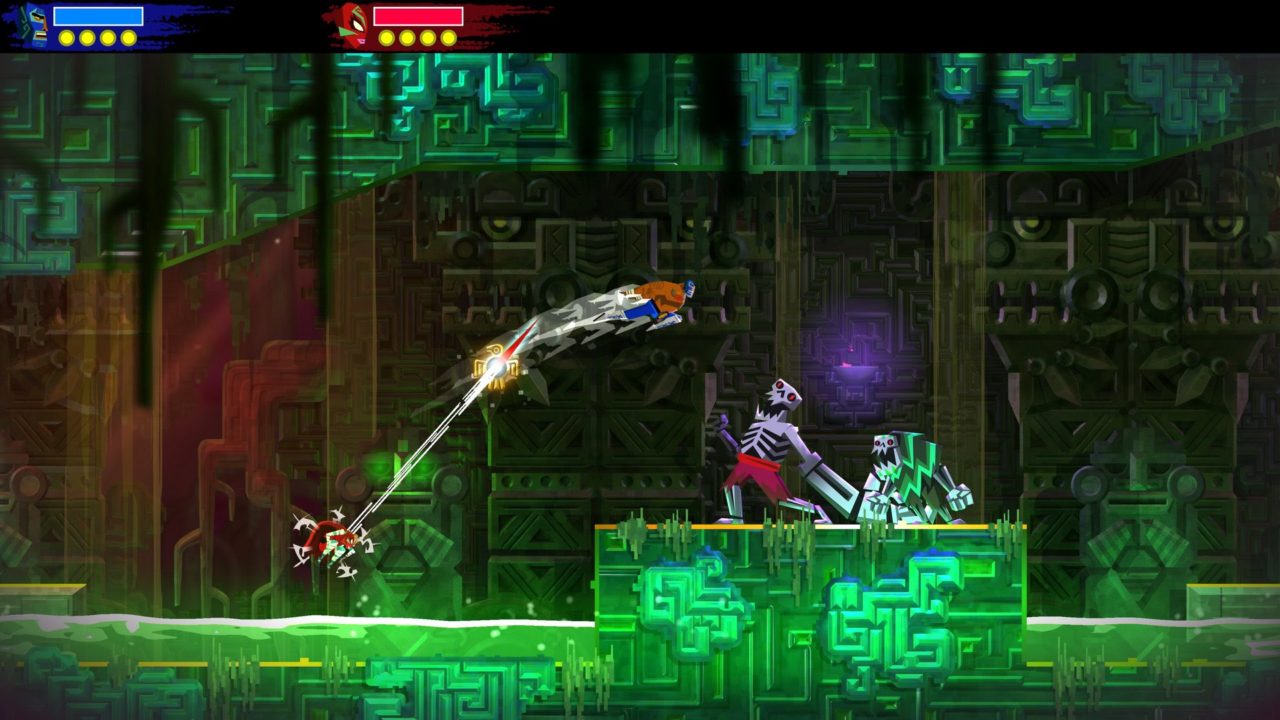 The bird’s quicker attacks and ability to float mean that it is easier to take down many of the adversaries while covered in feathers. Shifting between human and chicken is essential and knowing when to transform to what and which attack to use when builds up the core of Guacamelee! 2’s combat. At its best it’s brilliant, layered and elegant, but occasionally it does stumble. The fact that Juan’s head-butt requires zero directional input while each other special attack does, stops the game in its tracks and trips you up. In a game where you’re leaping, rolling and jumping between enemies and projectiles, it becomes near impossible to perform. Add yellow-shielded enemies, which need a head-butt to break, and you have controllers thrown at TVs. To boot, there are occasionally so many enemies pit against you at once, that I often got lost and had to resort to mashing buttons. This broke the excellent flow Guacamelee’s combat otherwise achieves.

Fortunately there are more upgrades than ever to help you. Ranging from fitness and fighting buffs to pollo powers, each has their own “master” and grants Juan new moves or combat effects that help him get through the mightier brawls and give you reason to keep risking your life for treasures.

And those treasures are tucked away everywhere. My map is still chockablock full of secret paths behind colored blocks. Giant statue heads allow you to jump between the world’s 11 locales making it easy to hunt down those extra chests and challenges. Plus, you can bring buddies along for the ride!

This time, you’re able to call on three local friends to join your side almost anywhere in the game. A  floating bubble system keeps everyone together and enemies scale in difficulty. With platforming challenges, you also get more chances to get Juan through his adventure which is a welcome bonus. 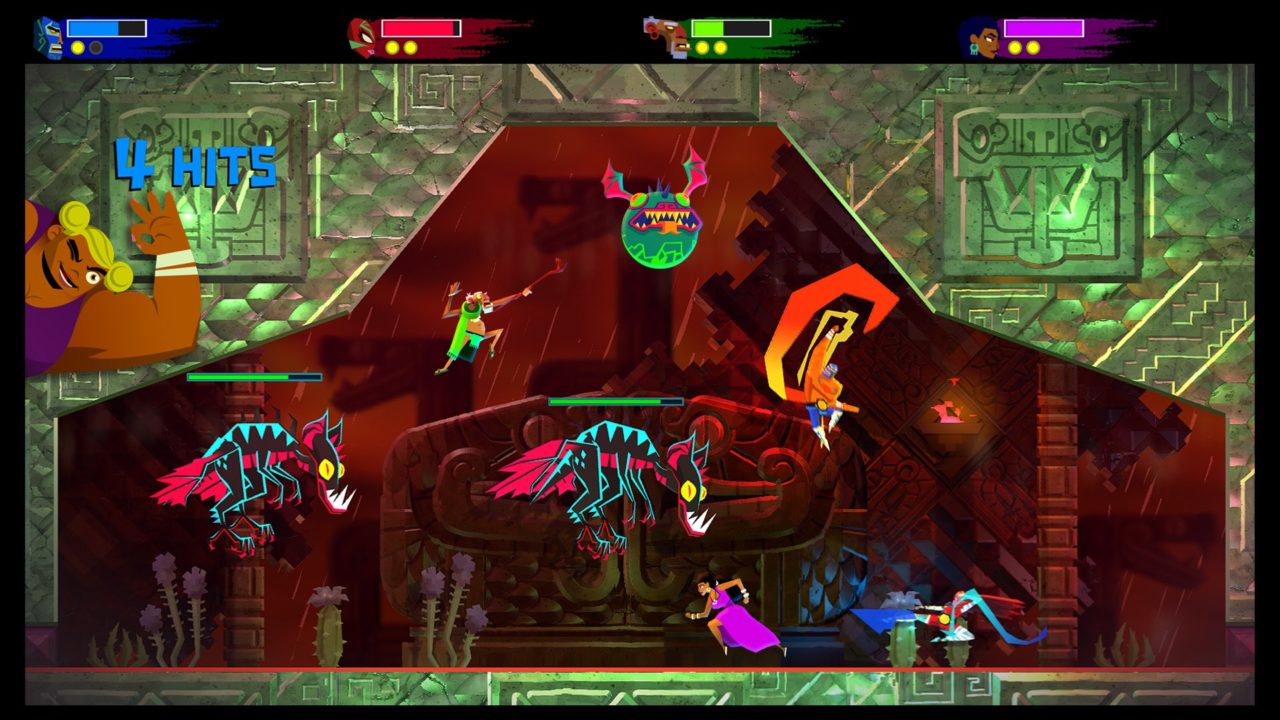 You might need the help too, because there’s a new big bad, Salvador, and he’s trying to get his hands on three magical relics in his thirst for power. So, of course, it’s up to Juan the farmer / luchador to save the world! If you missed out on the first game, fear not, the game opens with the ending of the original keeping newcomers up to date with Juan’s less-than-lucky life. Fans, on the other hand, will enjoy reminiscing with Tostada, chatting with Fray Ayaya and learning about what became of Jaguar Javier.

Drinkbox have done an excellent job keeping characters interesting, funny and charming, playing with the dimension shifting to add tons of humor. Dialogue is witty and never outstays its welcome with pop culture and video game references littered everywhere. One bonus level, in fact, was so good I thought it could have been its own little spin-off mini-game. 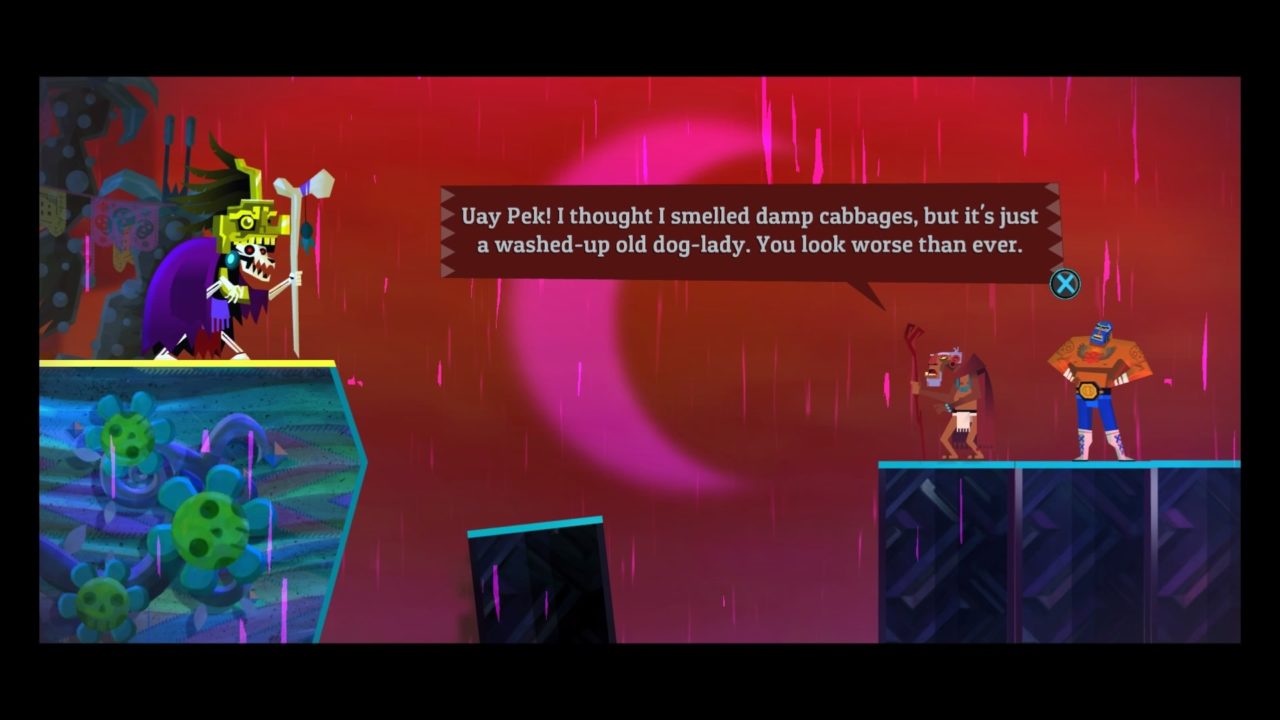 Most of Guacamelee! 2 is screen after screen, leap after leap and punch after punch of sheer brilliance and joy. There’s a poetry that forms in moments of magic where everything you’ve learnt in the game is put to the test in a perfectly designed level. And when you survive it, it’s so absolutely invigorating you can’t help but punch the sky.

Other times, though, I felt like Drinkbox added too many ingredients and as a result the levels and enemies stopped being the challenge, replaced by remembering which buttons did what. I absolutely hated about 4 hours of the 16 hours I spent with the game. In those moments, you also want to punch something, something that might break. Often, simpler is better, and while Drinkbox perfected so many elements, I feel they also fumbled in their effort to deliver as much luchador brawn as they possibly could.

Guacamelee! 2 is brilliantly made game. Its animation, character, enemy and level design, sound and music are freaking fantastic. Near perfect for the most part. The choice to absolutely launch every idea they had at players makes the game a little less marvelous than it could have been, but for most people that won’t stop Guacamelee! 2 from wrestling its way into their hearts and uppercutting out grin after grin.