The latest news in the world of video games at Attack of the Fanboy
September 17th, 2011 by William Schwartz 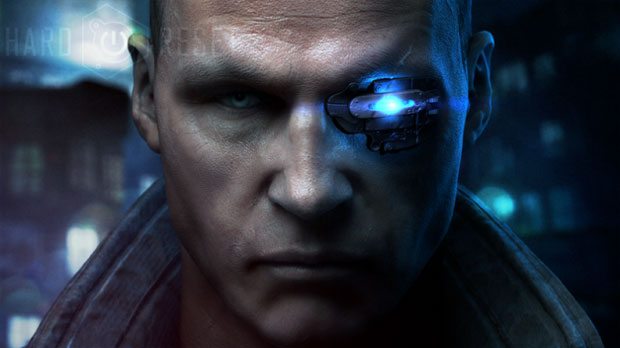 As a PC exclusive title, Wild Hog Studios’ latest game titled Hard Reset is a risk taking attempt in a genre filled to the brim with the copycat experiences.  Risking a wider audience and forgoing console distribution isn’t the only gamble that Flying Wild Hog makes.  They also abandon many of the caveats contained in modern first person shooters, and because of that, Hard Reset definitely sparked some interest in the PC gaming community.  The Polish developer has a strong pedigree, consisting of members of the Painkiller and Witcher franchises, so alot is expected of the game.

At first glance, Hard Reset will pull you into its gameworld with a mysterious storyline and a colorful cyberpunk world reminiscent of Blade Runner. Getting into Hard Reset, you find that your character, Major Fletcher, is tasked with saving Bezoar City from a robot invasion.  These robots, who follow into the classic Terminator storyline of becoming sentient and rising against their masters, is not a hard plot to follow.  Exactly how and why this happened in Hard Reset is another story altogether, and obviously the developers felt this way also. They do little in the way of expaining any of this to you at any point in the game whatsoever.  Plot points are described between levels in animated sequences that resemble a comic book more than a game, and while pretty, they continually layer question upon question without ever digging past the superficial.  Feeling more like filler than substance, the story in Hard Reset seems secondary.  While this might not be a new concept for games in 2011, it’s certainly odd for a single player game to completely abandon all sense of narrative.  Frustrating is one way to put it, because Flying Wild Hog creates a beautiful world that certainly draws you in, with many environmental details to further your interests of what makes Bezoar City tick.

Considering the past games of the developers involved with Hard Reset, and the obvious disregard for explanation, you do see that story is not the focal point of the game.  Digging into the gameplay, you could find it to be the strongest feature and biggest lure.  Pacing in Hard Reset comes from the combat in the game, upgradeable weapons, and a dynamic battlefield that forces you down a linear path of carnage.  The game moves away from what many first person shooters are doing these days, in regards to ammunition, reloading, and melee attacks…by not including them, at least in the traditional sense.  Upgrading your standard rifle to be fitted with RPG, Grenadier, or Shotgun firing modes, you have what by all accounts feels like a Heavy Machine Gun with unlimited ammunition of multiple types.  Scrolling with the mousewheel between firing modes, felt clumsy but effective if not overwhelmed.  Ammunition will tick down with each shot fired, but recharges much like health or a sheild would in other shooters.  Using more powerful weapons will use larger portions of this “ammunition”, and as you kill your enemies they will leave drops behind to replenish you in the heat of battle. With two classes of weaponary you have a wide arrangement of firepower at your disposal.  Classic human weapons like machineguns, shotguns, and rocket launchers are easily swapped with energy weapons that fire laser like projectiles and play stark contrasts to each other, with all being upgradeable in multiple ways.

It’s not a bad system, with a wide variety of enemies to encounter throughout the rather short campaign, there’s certainly some fun to be had in mowing down streams of these robots that will ambush constantly throughout. Enter a room and you won’t be able to progress without clearing it of all enemies.  Some will come as a surprise, but many times, it’s all just expected and can feel somewhat contrived by game’s end.   Environment plays a large role in Hard Reset’s combat.  Shooting electrical boxes, barrels, or other parts of your environment will help you in fending off your robot attackers.  Mixing the ammunition mechanics and the environmental helpers, many of the games combat set peice moments can require some thought as to which weapon will be used and which barrel will be shot, to get the most bang for your buck.  Not all areas of the game require this level of thought, but there are many times where a well laid plan is the best course of action.  The major problem that I had with Hard Reset, after coming to realization that combat was the focus of the game, was that this combat wasn’t strong enough to carry the load.  If other similar games have taught me anything, its that there must be a system in place to actually engage the player.  The environmental destruction and physics effects are great to watch, but a more rewarding scoring system could have worked wonders here in keeping the game fresh throughout.

It’s not all bad in Hard Reset.  A game filled with explosions, environmental destruction, larger than life boss battles, and a world full of other graphical polish you can definitely find yourself having fun with the game.  Depending on how much fun you are having just blowing up stuff, you’ll find that digging into the harder difficulty settings for the game can be somewhat rewarding if just for the insane challenge it will bring.  But make no mistake about it, Hard Reset is about as superficial as superficial games come. The poorly told story, in the extremely short campaign, will have you doing more than just scratching your head at the game’s abrupt conclusion.  Then again, if your objective is to point shoot and watch the mayhem that ensues, you might be extremely pleased.  As long as you don’t go in expecting more than that.