Not A Hero PC Review 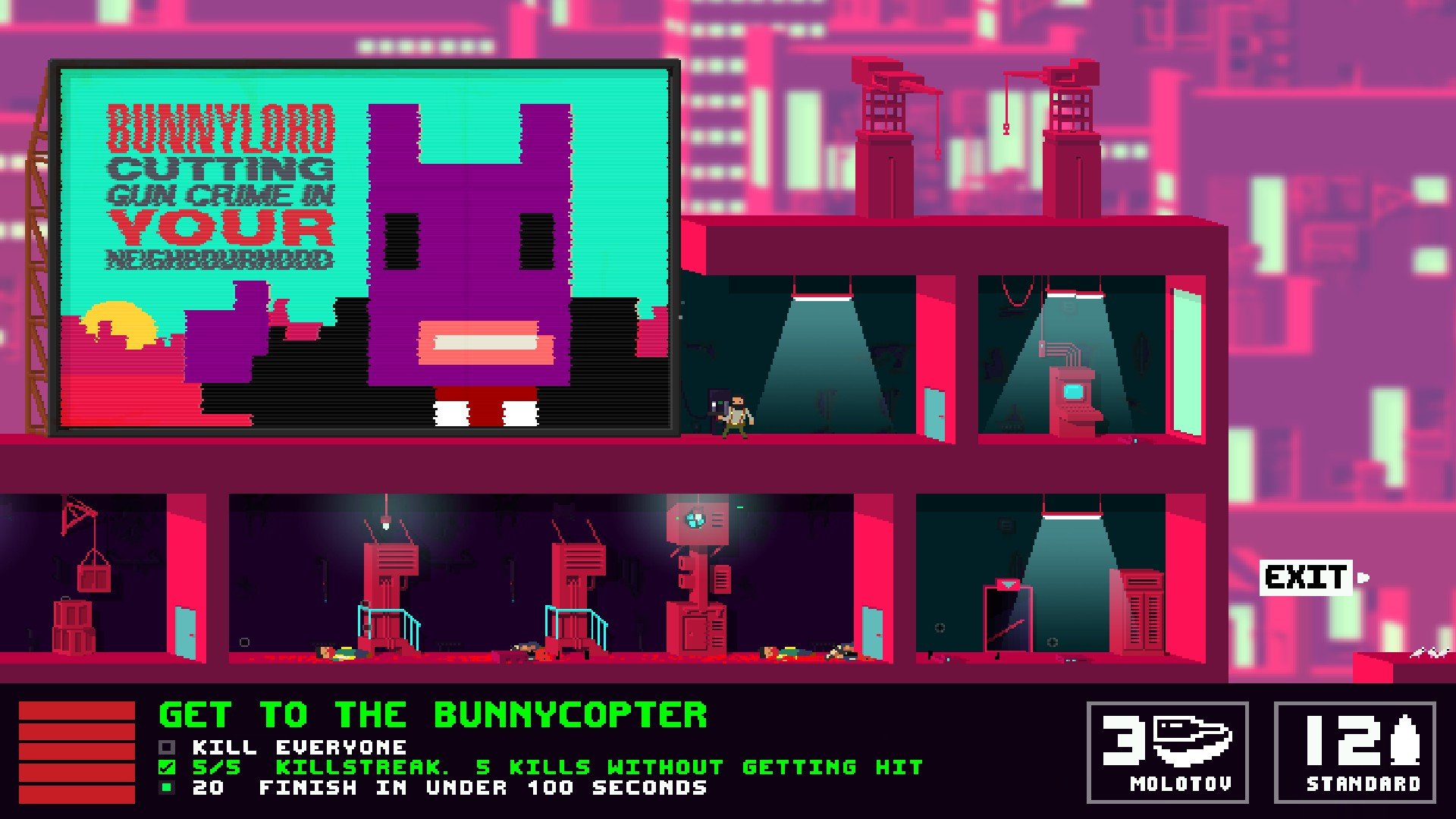 The Steam store entry for Not A Hero is remarkably succinct.

“Professional assassin turned amateur campaign manager Steve is charged with cleaning up the city by an anthropomorphic rabbit and mayoral candidate from the future named BunnyLord.”

To its credit, Not A Hero certainly delivers on this weird and weirdly straightforward premise. The game begins in the lead-up to a mayoral election. BunnyLord tells his best friend Steve that he has traveled back from a dystopian future, and the only way to stop it is to have him elected mayor. The fastest way to be elected, BunnyLord reasons, is to be seen as tough on crime. And the quickest way to be tough on crime is to start killing criminals.

This is the crux of Roll7’s second release, Not A Hero — killing lots of things. The game is an isometric cover-based shooter whose pixelated gruesomeness follows in the footsteps of titles such as Gods Will Be Watching and, of course, Hotline Miami — another title from Devolver Digital, Not A Hero’s publisher.

A level covers a day in BunnyLord’s campaign, and has Steve carrying out various tasks as a thin excuse for shooting people. The weak justification is definitely a deliberate decision that Roll7 were smart to make. Cutscenes are generally fairly short and completely skippable from the beginning, as a tacit acknowledgment that story takes second base to gameplay — which is as it should be in a game like this.

Cover-based shooting is emphasized as important early on, but in reality you’ll find yourself not wanting to use it much. Far more fun is the game’s sliding mechanic, which gives you a real sense of flow as you slide, trip and shoot your way through the game’s short levels. Taking cover and reloading both put a stop in the game’s momentum, which is already broken up by forced waits for doors to open and switches to activate. It’s here that you’ll find yourself reloading, more often than not.

Bright, pixel backgrounds turn horrific violence into slick and stylish fun. The isometric view and constant navigation of buildings reminded me a lot of playing with a dollhouse — albeit one whose windows I shattered, contents I stole and occupants I murdered. Not A Hero’s levels are busy with chaotic action and your character can become lost among the fray on-screen. Special weapons and explosives are the quickest way to get lost, but also highly satisfying to use. At times, too, it isn’t quite clear where the game wants you to head next. This seems to be an intentional aspect of level design, as dead ends and shortcuts can be found in most levels. 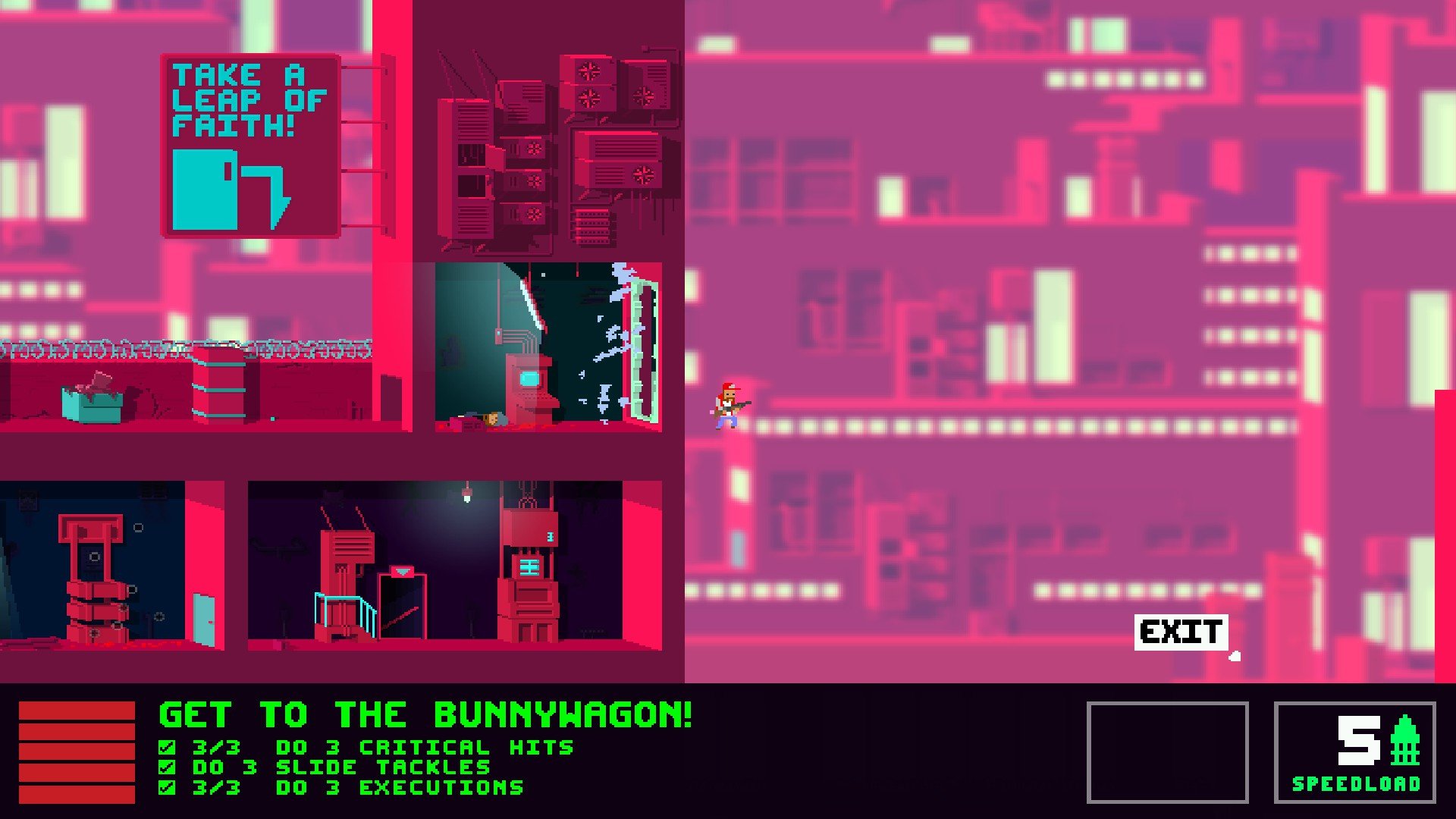 If you’re not British and haven’t been exposed to any UK media outside Downton Abbey, get ready for a crash course on the wide variety of permutations of the English accent. The upbeat chiptune soundtrack is accompanied by voiced characters who are every bit as vulgar and fun as the rest of the game. I spent more time than I care to admit flicking back and forth on the character select screen to see what my ragtag crew had to say for themselves. Each time Cletus spoke, I found myself thinking of the sorts of characters Matt Lucas tended towards in sketch show Little Britain. BunnyLord is also voiced — but through a series of distorted buzzes that might have been words. It gave me the impression of a Banjo-Kazooie character, as interpreted by the minds behind the black comedy Drawn Together.

Each day comes with a set of objectives to complete, which can induce varying levels of satisfaction or frustration to perform. If you want BunnyLord to really like you (and it’s likely that you do), you need to complete them all. Portions of BunnyLord’s post-level dialogue are altered by your performance, though each string of hyperbolic and disjointed and praise left me with the feeling that the game procedurally generates dialogue, for better or worse. Character unlocks also hinge on objective completion, expressed via BunnyLord’s approval rating, allowing Steve and BunnyLord’s friends and associates to join in on the killing. New characters come with their own weapon and set of abilities, and they gradually fill out the empty spaces in the Character Select screen. 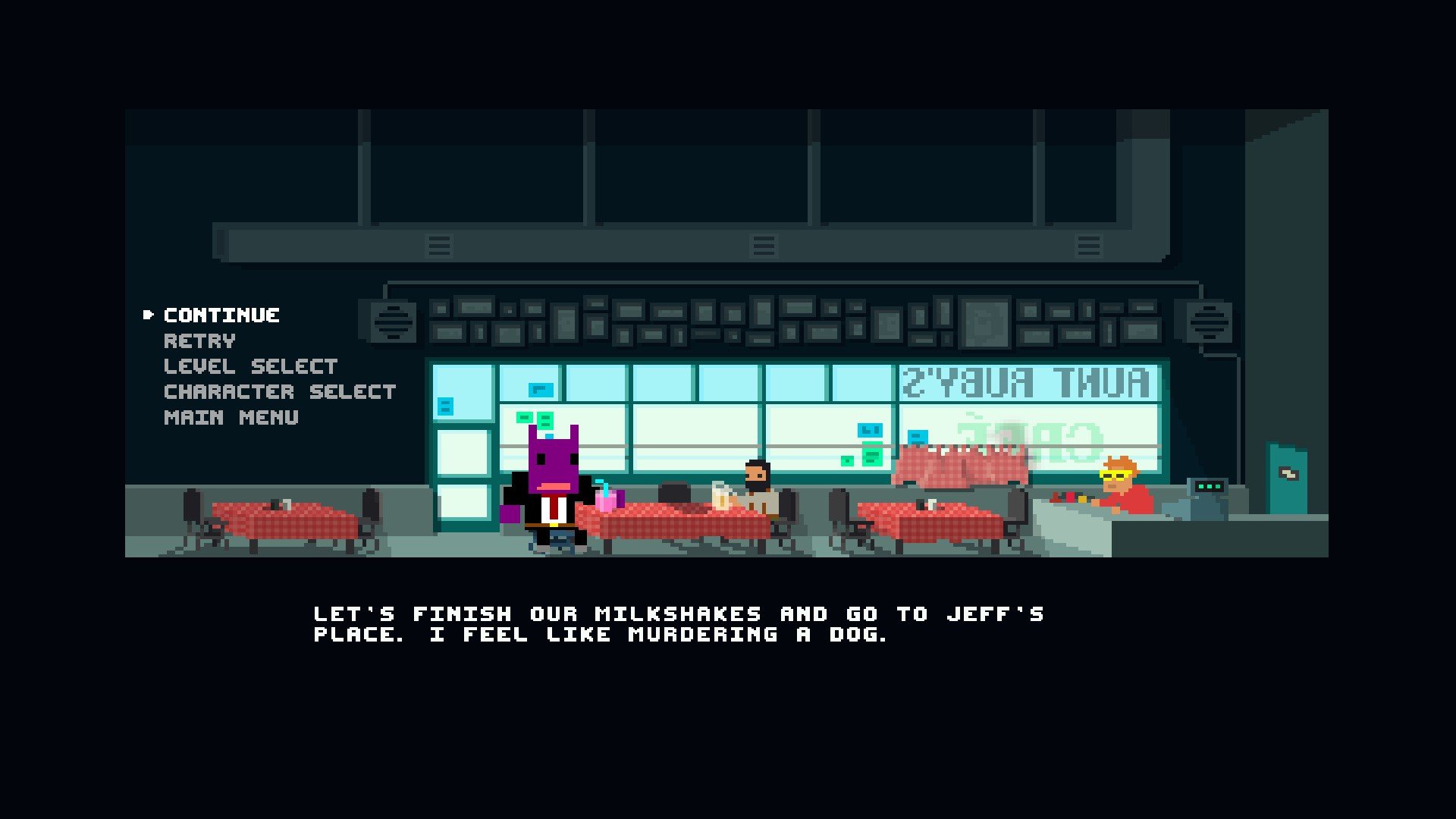 Not A Hero’s dialogue is best appreciated by people who find random humor to be the peak of comedy. I’d like to take a judgmental stand here, but I’m far too fond of puns and thus relegated to the bottom of the hierarchy of comedic taste. Fortunately, it balances occasional cringe with sections of biting, incisive sarcasm. For fans of shock humor, there’s also plenty to love about BunnyLord’s crass excesses and fondness for superlatives.

The game can be ludicrously fun. Several levels have time-based objectives, encouraging you to tear through them as fast as possible. Optimal character choice becomes important if you’re serious about beating these objectives, so I have a feeling that Not A Hero is going to end up with a thriving speedrunning scene in no time. Weirdly, the game’s Steam release comes with trading cards but not achievements as of yet. Not A Hero’s release has already been delayed by a week, so it could be that Roll7 just ran out of time to deliver them, and that we’ll see achievements in the future.

I found myself not really liking BunnyLord himself all that much. He is supposed to be the game’s big draw, the embodiment of its outlandishness, yet I found myself torn between skipping his dialogue and sticking around to see whether it would grow on me. Though not personally enamored, I can definitely see that the developers have set out to create a certain type of character and delivered on that idea effectively. I did find myself rather liking Steve, which I did not expect to — his slide tackles and laconic manner shot and kicked their way into my heart.

Thankfully, the game really is fun to play. It’s easy to dismiss this as Hotline Miami with a different point-of-view, but Not A Hero stands on its own merits as a frenetic shooter.