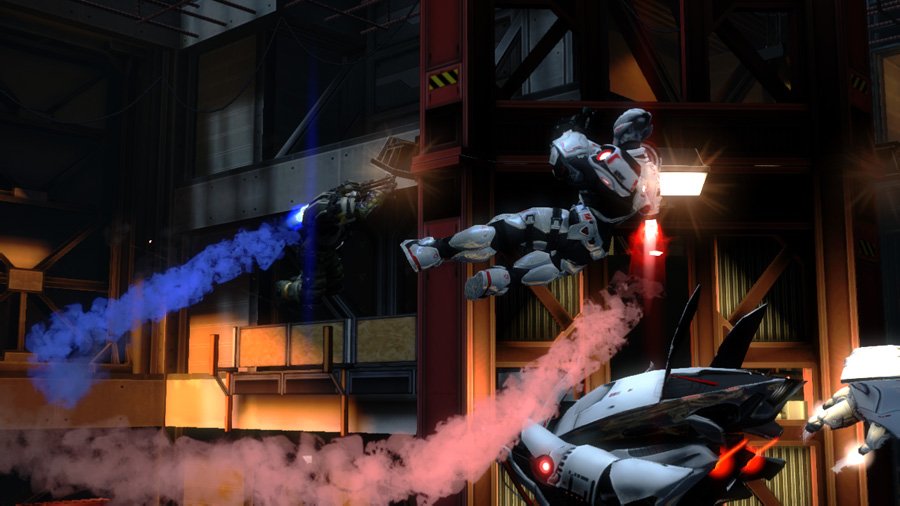 Recently released as part of this year’s Xbox Live Summer of Arcade, Hybrid puts players smack dab in the middle of a world wide war for Dark Matter, giving them a stake in a persistent struggle for their faction. From the developer of Scribblenauts, this shooter is drenched in changes that make it far from the ordinary, and much different than any other before it.

Not much is alluded to by way of story in Hybrid, it’s entirely focused on the online aspect of gameplay. Battles play out in three vs. three gunfights where players earn XP and harvest dark matter for their faction. This dark matter is used as a global point tally which is kept track of via a world wide map that is broken down to many different territories across the globe. Hopping online in Hybrid will allow you to monitor the successes and failures of your faction-mates, and jump into “Hot Spots” which represent contested points in the overall war. When your faction has harvested all the Dark Matter from a given territory it’s on to the next Hot Spot, to contest against the vying faction for more of this energy.

Hybrid isn’t the first game to take persistent online gameplay to the next level on consoles. M.A.G. did it a few years back on the PS3, Chromehounds tried it as well, and even more recently, Armored Core V gave it shot. No one has nailed this concept completely as of yet, but Hybrid comes quite close. Putting some sense of meaning behind each round of gameplay should be something that more developers are striving to do, and even though there’s a general lack in details about the persistent war at hand in Hybrid, it’s intriguing nonetheless.

Hybrid is also unique in the fact that its a cover based shooter that is fought either while behind cover, or in the air. There is no movement on the ground per-say, aside from moving while in cover. Levels consists of platforms, barricades, and other pieces of landscape that can be attached to and used for cover. You can jump in and out of this cover rather seemlessly, and glide from platform to platform at the press of a button. Constantly monitoring your environment for enemy activity, teamwork is paramount in Hybrid, as in any other online shooter. Once getting the hang of Hybrid’s unique controls and way to play the game, there’s very little difference between Hybrid and other cover based shooters at its core.

Familiar territory for most shooter fans, kill enough enemies in a row and you’ll earn killstreak rewards at 3,5, and 7 kills. A small sentry will assist you at 3 kills, a Warbringer flying sentry will take its place at 5, and at 7 you get a human-like drone that will swiftly dispatch enemies until destroyed. Depending on what gamemode you are playing, Hybrid adheres to plenty of common gametypes in the genre. Team Deathmatch, King of the Hill, and other objective based modes offer some familiarity for shooter fans.

Hybrid is also completely customizable when it comes to load-outs. Progressing through each round of combat will earn you XP whether you win or lose, and this XP can be spent on in-game items that can bolster your performance on the field of play. Perks that help you, your team, or hinder others make for an interesting dynamic when working with a team of friends. Weapons upgrades that range from machine guns to sniper rifles cater to nearly every style of play that you can imagine. Compared to other shooters, Hybrid is both competent and competitive as far as features go.

There is a reason why many shooters both first and third person, adhere to a traditional rule-set. The tried and true formula that makes Hybrid unique, also become the game’s Achilles heel in the long run. The shooter confines itself and limits player range of motion, and the combat can feel dumb ed down at times because of it. Jumping from platform to platform in Hybrid, 5th Cell does give players some range of motion during their flight path, at which point controls become sloppier than what is shown in the stationary gameplay. Some inaccuracy in selecting which cover you want to enter will lead to needless deaths as well. Hybrid certainly takes some getting used to, but even when you do become accustomed to the differences in gameplay, some of its nuances can be downright frustrating inside of a what is otherwise a pretty decent shooter.

Hit and miss servers at the game’s launch didn’t help Hybrid, but as the launch week wore on they seemed to become more stable. Shooter fans that are looking for a change from the normal will definitely find solace in Hybrid, but if you’re happy with more traditional offerings, this one might not win you over immediately.