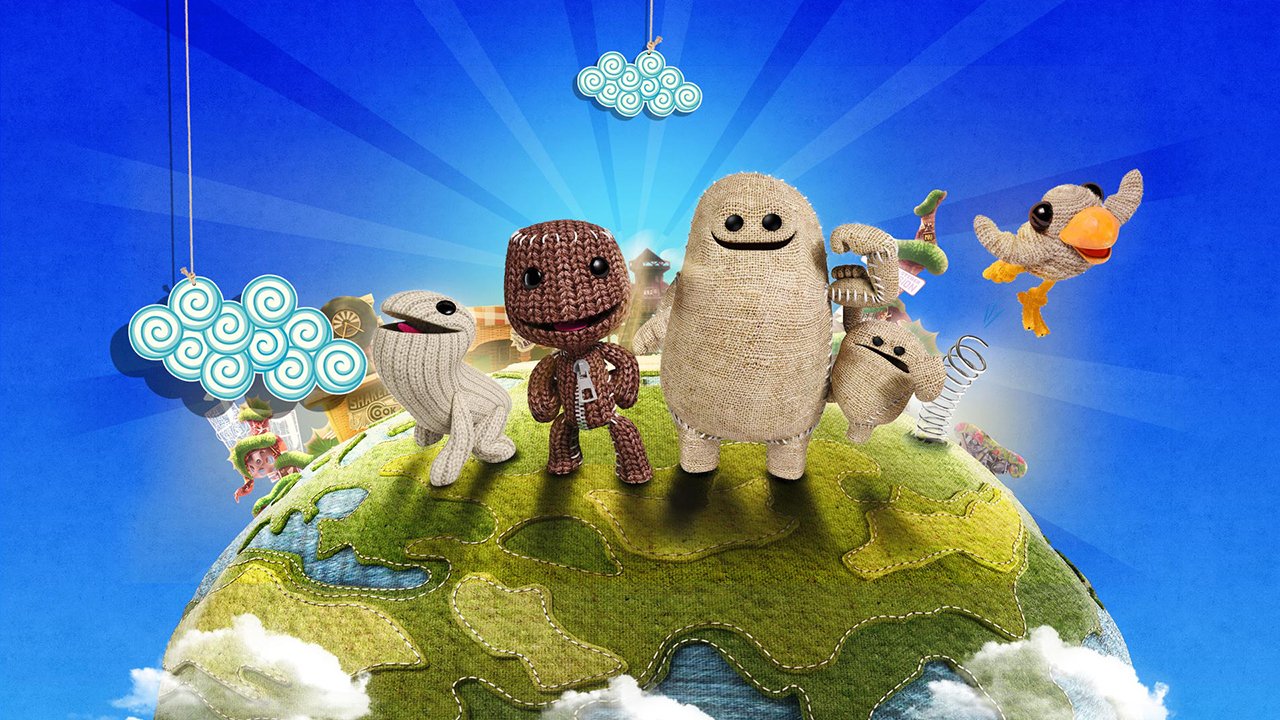 The differences between the original LittleBigPlanet and its sequel were major. The introduction of power-ups certainly enhanced the platforming gameplay in meaningful ways and a robust new set of creation tools and sharing capabilities definitely built onto an already successful premise. LittleBigPlanet 1&2 were a toyboxes for the creative, and LittleBigPlanet 3 is no different. While it’s still got all the whimsy and charm of them, Media Molecule has passed the baton to Sumo Digital. The direction and spirit of the series, spanning six games across multiple genres and platforms, is still very much intact. LittleBigPlanet 3 is, once again, both a feature rich creation suite, stuffed to the brim with tools for players to create in-game content, and a compelling platformer, that introduces friends of the iconic Sackboy to the recipe, each with unique abilities to alter the gameplay.

LittleBigPlanet 3 isn’t quite as ambitious as its predecessor though, but that doesn’t make it any less fun.  The biggest difference here is that Sackboy will have companions helping him on this journey, and the introduction of three new characters with unique abilities has changed the game in radical ways, sometimes feeling like four completely different platforming experiences. The other half of LittleBigPlanet 3, the creation tools, are largely carried over from the last game; it’s a massive set of building blocks that confines user constructs to only their imaginations. 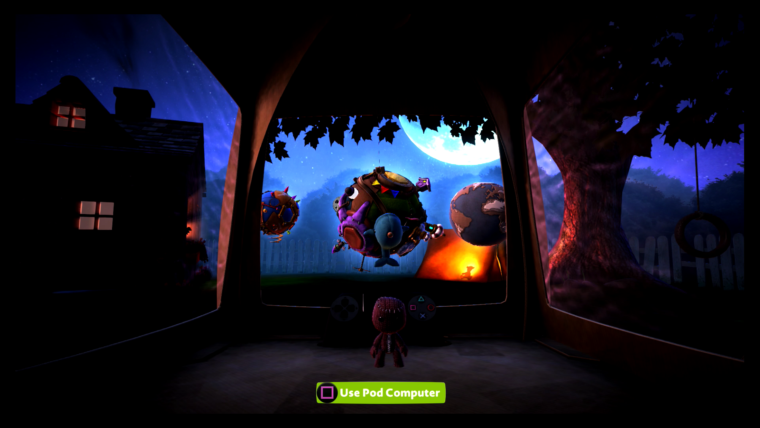 The native platforming of LittleBigPlanet 3 was already pretty solid. Sackboy, still the main character here, is once again on a mission to save creativity and all that’s good in the Imagisphere. He’s outfitted with a number of a new power-ups that change the game in their own right, introducing new ways to navigate the world, but the biggest deviations from the previous formula are in the companions that he unlocks on his journey.

The single player story of LittleBigPlanet 3 is a quick jaunt through four worlds, where Sackboy finds and frees Oddsock, Toggle, and Swoop. The three new characters each have a unique ability, and each have a level dedicated to showcasing these talents. The four main story hubs each beckon you to replay them after you unlock these new characters, as they have new areas, power-ups, collectibles, and sub-levels that aren’t accessible by Sackboy alone.

The new characters do allow for many different types of platforming experiences in LittleBigPlanet 3, even if they are a little underserved. Being a fairly short single player game on a straight run through, you rarely see the same thing twice.  The colorful and creative worlds are joy to look at, though the puzzle solving and actual platform gameplay aren’t very challenging. That is, if your main objective is to get from A to B. That’s not the real challenge in LittleBigPlanet 3 and that’s never really been the case in this series. Scooping up all the Prize Bubbles and other collectibles in each level and putting together that perfect run for a shinier trophy and extra rewards has always been the draw. That’s still very much the case in LittleBigPlanet 3, but the single player adventure feels less inspired as a standalone experience than it has in the past. The new characters show a lot of potential that just doesn’t get tapped in the main storyline, instead, it’s entirely up to you if you want to explore these areas with the new cast.

Since each level where Sackboy’s new companions are freed and added to the party have extra content in them explicitly designed to be discovered on a second playthrough, LittleBigPlanet 3 begs to be played more than once. But this exploration is totally up to you, and not doing so doesn’t hinder your progression through the story. However, if you want to see all there is to see in the game, you’ll need to take advantage of all that’s offered to you. Which is quite a lot actually, with the caveat that you are looking to complete the game at 100%.  You can tackle the four main story hubs alone, and explore each level within with Sackboy himself, or one of his companions.  Better yet, you can play levels with friends locally, or in online co-op, and the benefit is being able to access areas where teamwork is necessary to collect hidden items or access events. 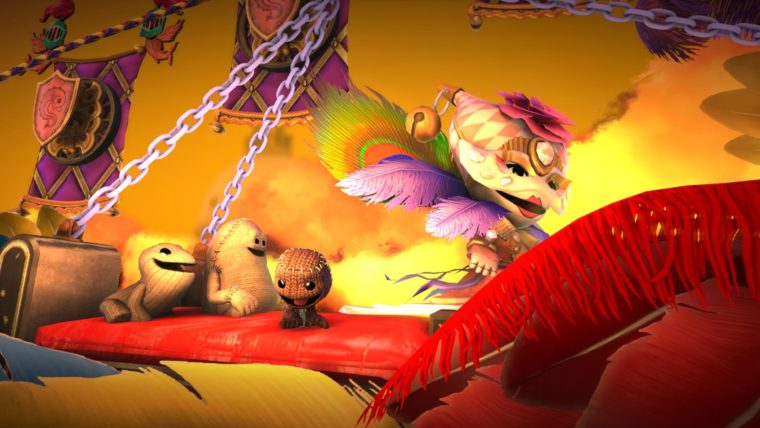 Like LittleBigPlanet 2, the actual content made by the developers is a quality over quantity situation. Sure, as aforementioned, there are plenty of reasons to go back in to the story and go for perfect scores, power-ups, stickers, and alt-levels, and other side content, but the story mode of LittleBigPlanet 3 can be over before you know it. The developer-made worlds each have a unique theme and aesthetic, following in the footsteps of Media Molecule’s impeccable presentation and it’s hard not to wish there was more of it. It’s one of those things where some of the developer-made content is so creative, and fun, that more would always be welcomed.  The introduction of new characters is brief and the story not quite as involving as you wish it might be.  LittleBigPlanet 3’s Adventure Mode feels more like an introduction to what’s possible, rather than a fully fleshed-out story that explores these new characters in any meaningful way.

The good news is, there is more to see. The bad news is, it’s not going to be made by professional game developers. What soon should be a never-ending stream of content from the LittleBigPlanet 3 community will be up on offer shortly and from day one all of the content already made by the LittleBigPlanet Community in previous games (over 9 million user generated levels) will be accessible as well. And if the community has proven anything over the years, it’s that they’ve got plenty of ideas, and the tools provided to create in-game content are such that anything is possible. There are more tools than ever to create content in LittleBigPlanet 3. 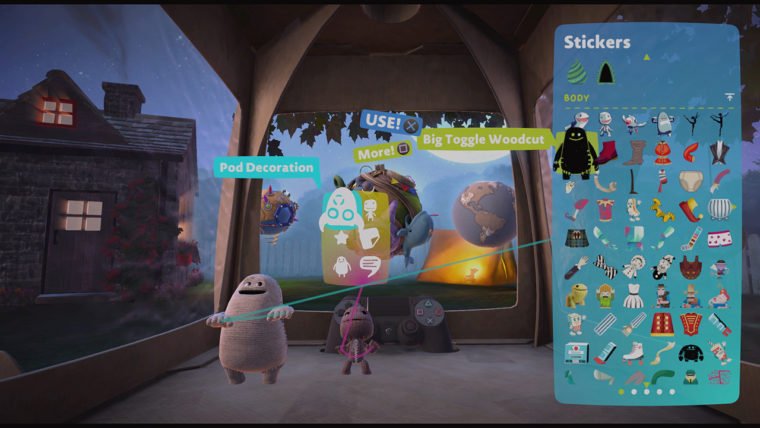 The Creation Tools in LittleBigPlanet 3 are the most comprehensive to date, adding enhancements and improvements to the existing ones, while adding new tools as well. Creating something in LittleBigPlanet 3 is easy. Creating something worthwhile will take a little more time and practice with the tools provided. There’s a helpful and lengthy set of tutorials to guide you, which teach players what are essentially the fundamentals of creation. It can be quite daunting though, and creating content isn’t for everyone.

You can look at this in a couple of ways. If you don’t have the time and patience to contribute your own levels to the LittleBigPlanet community, you can always still access the wealth of content that everyone else provides, and there’s quite a lot of it. LittleBigPlanet players have created so much interesting and unique content over the years. LittleBigPlanet 3 should see a continuation of that trend.

This time around though, players can also create full-fledged adventures to take. Sumo Digital has given players an unprecedented level of freedom to create entire games that can rival the scope of their single player campaign. Players can stitch their creations together, using a full world map that links levels and offers power-ups to discover and use, just like the game’s developer-made campaign. The LittleBigPlanet Community may certainly end up picking up the slack on the short developer-made single player story. The reality of it is, there may end up being 1000’s of Adventures to take in LittleBigPlanet 3.

LittleBigPlanet 3 is more of a good thing. Sumo Digital tweaks and refines the formula slightly in their story offering, introducing players to new characters and world full of possibilities. As was the case in the LittleBigPlanet 2, that’s just the beginning though. Jumping into the world of creating and sharing your self-made content, and exploring that of others, is the crux of what makes LittleBigPlanet games so interesting. LittleBigPlanet 3 gives players the tools and the inspiration to create a never ending platform experience, but it will be up to the community to do just that.