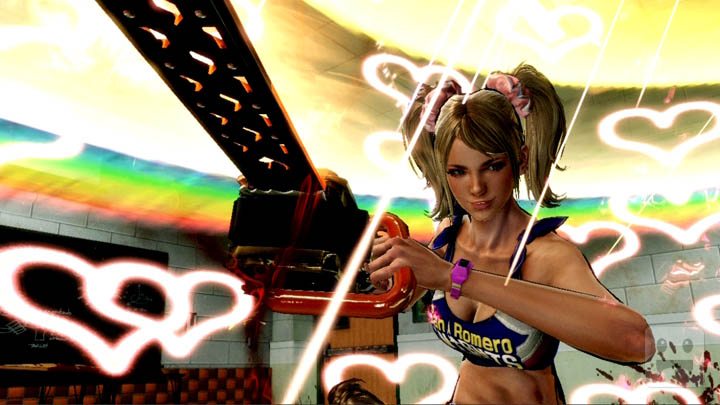 Grasshopper Manufacture is probably best known for its weirdness.  From the No More Heroes series to Shadows of the Damned, Suda 51 and company definitely have a certain style about them.  Gamers are getting more saavy by the day however, and just being different isn’t enough.  While there’s certainly a demand for alternative styles in gaming, gameplay is something that speaks any language.  Grasshopper has got the pop culture thing down, they strike a level of abstract better than anyone, but some of their previous efforts have fallen flat in this all-important gameplay category. If you’ve heard anything about Lollipop Chainsaw, you know you’re in for at least another mind-blowing experience that’ll be unlike anything you’ve ever played before.

Lollipop Chainsaw is a third person action title that stars a high-school zombie-hunting cheerleader named Juliet Starling.  Setting out for school on the day of her eighteenth birthday, Juliet finds that her school has been overrun by a zombie infestation.  Her boyfriend Nick is bitten by one of the flesh eaters, and to save him, Juliet decapitates him and carries around his talking head on a clip attached to her revealing cheerleader attire.  Yes, this all happens within the first couple minutes of the game.  No, this is not the craziest moment in Lollipop Chainsaw.

Being a literal hack-and-slash Juliet is armed with a chainsaw, pom-poms, and a slew of upgradable combinations.  The combat has a weighty feel to it when using this massive chainsaw, which is about the only portion of the game that is remotely rooted in reality.  Stringing combinations together with the chainsaw has an almost rythmic feel and many enemies have more than enough health to withstand multiple slashes.  That’s probably because the developers want you to use a combination of the pom-pom attacks as well.  These attacks will allow you to daze your enemy (signaled by stars over their heads) and then they can be decapitated for an insta-kill when following back up with the saw.  Kill three enemies at once and you’ll earn extra coins and points in a segment called “Sparkle Hunting”.  Earning these coins is definitely a big part of Lollipop Chainsaw.

As you progress through the game’s six act campaign, you’ll come across staggered shops where you can purchase upgrades for Juliet, these include new moves, outfits, buffs, health packs, and other things to help you along your way.  There are certainly a lot of collectibles in Lollipop Chainsaw, that you’ll not likely find in a single playthrough.

Lollipop Chainsaw is a weird game.  A stupid game if you will.  It is consistent in its self defecation throughout the short five hour camapaign.  There’s just no mistaking some of the inclusions in the game for anything other than for the sake of shooting for stupid.  Compared to a movie, Lollipop Chainsaw would be the kind of thing you’d find in a B movie horror marathon.  It’s got the whole innocent hot girl kicks zombie butt thing going for it after all.  Consistent camera pans towards Juliet’s croth and chest  remind you constantly what this game’s major marketing technique is, and while it might have been their intention, it doesn’t come off as shameless as it could have. There’s something inherently fun underneath all the rainbows and boobs that’ll have you grinding you way through musically themed zombie bosses in the march towards your final destination.

Where exactly that inherent fun is, I couldn’t tell you.  Perhaps its the weirdness of it all, or the varying game types that Grasshopper throws at you throughout the relatively short single player only campaign.  Or, it could just be the kaleidoscope of color that is constantly assaulting your senses in Lollipop Chainsaw while you dismember zombies and save your classmates, that it make it a moderately enjoyable experience.  It’s a give and take with Lollipop Chainsaw.  For every one endearing new character you meet,  or mind-bogglingly odd area you enter, you’ll find a battle that offers you a poor camera angle or clunky control aspect in the game.

For Suda fans, Lollipop Chainsaw will be another title that’ll quickly live up to your high expectations.  A presentation and soundtrack that takes you well away from gaming’s conventions.  For the rest of the gaming world, it might take some time to warm up to just how different Lollipop Chainsaw is from anything you’ve ever played.