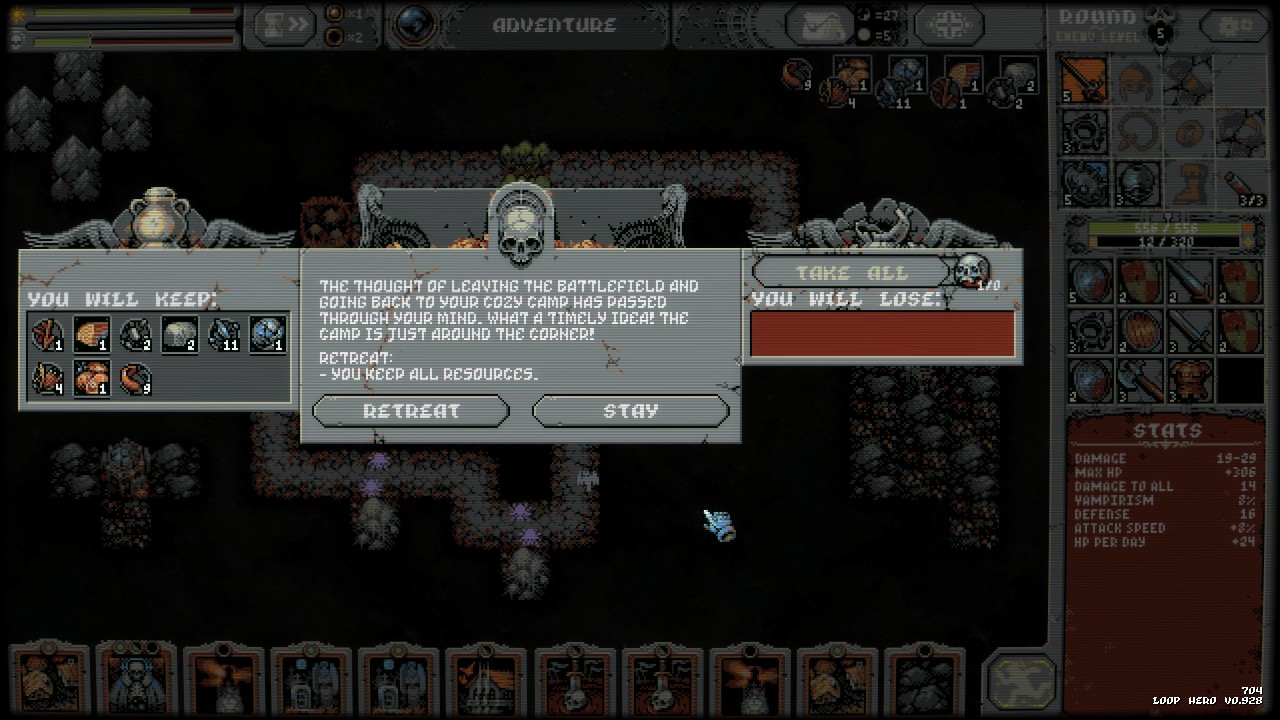 There’s no better way to sum up Devolver Digital’s newest title Loop Hero other than to say it feels like the build-a-bear version of the roguelite genre. There’s a saying when you play a roguelike game that no run is exactly the same. In Loop Hero, that phrase is especially true, because you quite literally build your own runs each time. You control what spawns where in your infinite loop, however, Loop Hero will always keep you on your toes. Even when you put down a card that’s supposed to help you, there is almost always a drawback.

What makes the game stand out from an already niche genre is it’s build-a-bear-like structure that was mentioned earlier. Simply put, each run of Loop Hero is determined by you and what cards you put down to build the landscape with. It was also mentioned that even though certain cards, for example, the rock/mountain cards that give an HP boost are supposed to help they also have drawbacks that can be overlooked if you aren’t paying attention. For the rock/mountain card example, spawning ten will place a goblin camp in a random location around the map which, as you guessed it, will now spawn goblins in the adjacent tile. It fulfills a certain niche not just with being a roguelite, but a create your own adventure sort of way while doing so. Most games of the genre have this appeal somewhat by having things like weapon variety and perks; Loop Hero takes it to a whole other level of customization with not only just the classes and weapon types, but the entire terrain is your playground.

To clarify, Loop Hero is a roguelite game instead of a roguelike. What this means is that when you play Loop Hero and inevitably die, you do not lose all progression. Progress in Loop Hero is defined by items you keep after you return from an expedition. Even when you die, you will still keep 30% of all items gathered. The game tests you on your intuition of knowing whether you should layback and keep the majority of your resources, or going back for one more loop and potentially losing some of the progression you’ve gathered. It’s a weird but fair trade-off. You can also always choose to go back to your hideout whenever you want, and you keep 60% of your loot collected instead of the usual thirty percent from dying. Knowing when to give up on an expedition to maximize your loot is crucial when playing. The tutorial also gives the player a hint on how to keep all your loot that you’ve obtained, and figuring out how to do so is all about paying attention to the game layout.

The soundtrack the game offers accurately sets the tone of the experience, but offers little to nothing else. It is all extremely atmospheric and if you’re looking for a catchy tune you won’t find it here. It almost sounds like a horror game with how eerie and almost melancholy it is. There wasn’t anything that clicked with me during the time spent with it, but there is some definite enjoyment to be found within the ost.

One of the biggest issues I found within Loop Hero is the combat system. In a typical roguelite, combat is quick and precise and what determines whether the player will die on the spot or advance in the game is their own skill. Roguelites are much more forgiving since the progression system makes traversal easier the more you play, but Loop Hero does not have the traditional combat system. It’s akin to something like Slay The Spire, where combat was determined by the card system implementation. Loop Hero has this system as well, but it’s geared towards how you build your world rather than combat. You get item drops from enemies and the enemy levels go up by 1 each time you complete a loop and the item drops level up along with it.

The main issue isn’t the enemy types, but just simply how Loop Hero handles it’s combat. The entire combat system is automatic which means you have almost no control over how the character interacts with the enemies besides what gear, buffs, and supplementary items you have with you. An example of this type of combat working against the player are the bosses. I managed to reach the chapter 1 boss in only about 10 runs and was unable to defeat him despite having a health buff and high-level gear was because I didn’t have enough buffs from the campsite portion of the game. That was a bit frustrating, as it felt like progression was being blocked due to not enough time spent grinding out for resources to access said buffs.

The several instances in which this occurred unfortunately soured the experience and was an eye-opener about how boring and repetitive combat can truly be here. Not only can you not control what your character does during these very frequent segments, but it’s not interesting to look at visually. The graphics are very reminiscent of the Gameboy Advance art style which was certainly a plus but other than that there is nothing else that is interesting besides the text box that pops up when you encounter a certain type of enemy for the first time. Each and every enemy, including the player only has 1 attack animation. Of course, certain enemies have special attributes like the vampires having the ability to drain HP and gain some of there’s back but the animations are all still repetitive and get old fast. Coupled with the fact that the more you repeat the loop (which means the day cycle this game implements spawns more enemy types) and you’re looking at combat encounters every 5 seconds with almost nothing interesting to look at. 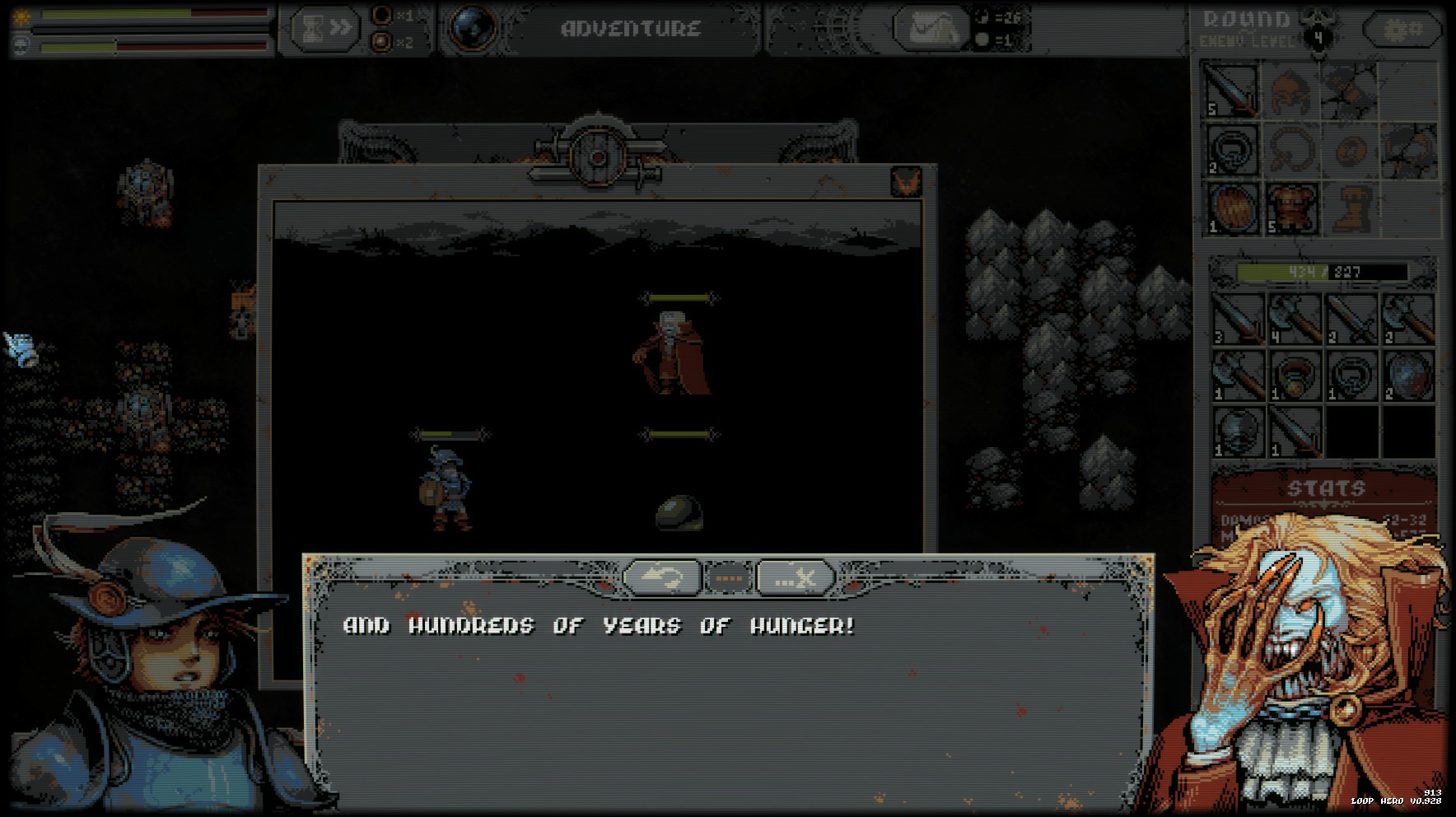 This entire system can be understandably frustrating to players expecting a roguelite like Hades who knocked it out of the park last year. Coming after playing Hades a few months prior as well, it’s such a drastic change to see how these two games approach elements such as story, combat, and structure. However, just because Loop Hero is vastly different from the standard the genre sets, doesn’t mean it’s a bad title.

Touching upon the art style a bit more, it was very pleasant to see this more retro style being utilized. Although the main character himself isn’t anything to write home about, just about every single monster or NPC with a unique portrait is visually appealing or interesting in some fashion. In some cases with the monsters, they can be downright disturbing. A personal favorite encounter was with the vampire who seemed almost rational, but then you see his jaw extend with those anglerfish-esque teeth and it was a surprising treat. The love and attention to the art style is nothing short of great, and will definitely draw in retro fans that are looking for this type of  ‘old school’ feel.

Despite my initial misgivings with Loop Hero, there was some genuine enjoyment to be found within each run. Succeeding in this title relies heavily on your own intuition, how you manage your card deck, and knowing when to give up a run. If everything that was described sounds interesting or fun have a go at it. It certainly fills this niche role that can’t really be found anywhere else.