Biting off more than it can chew 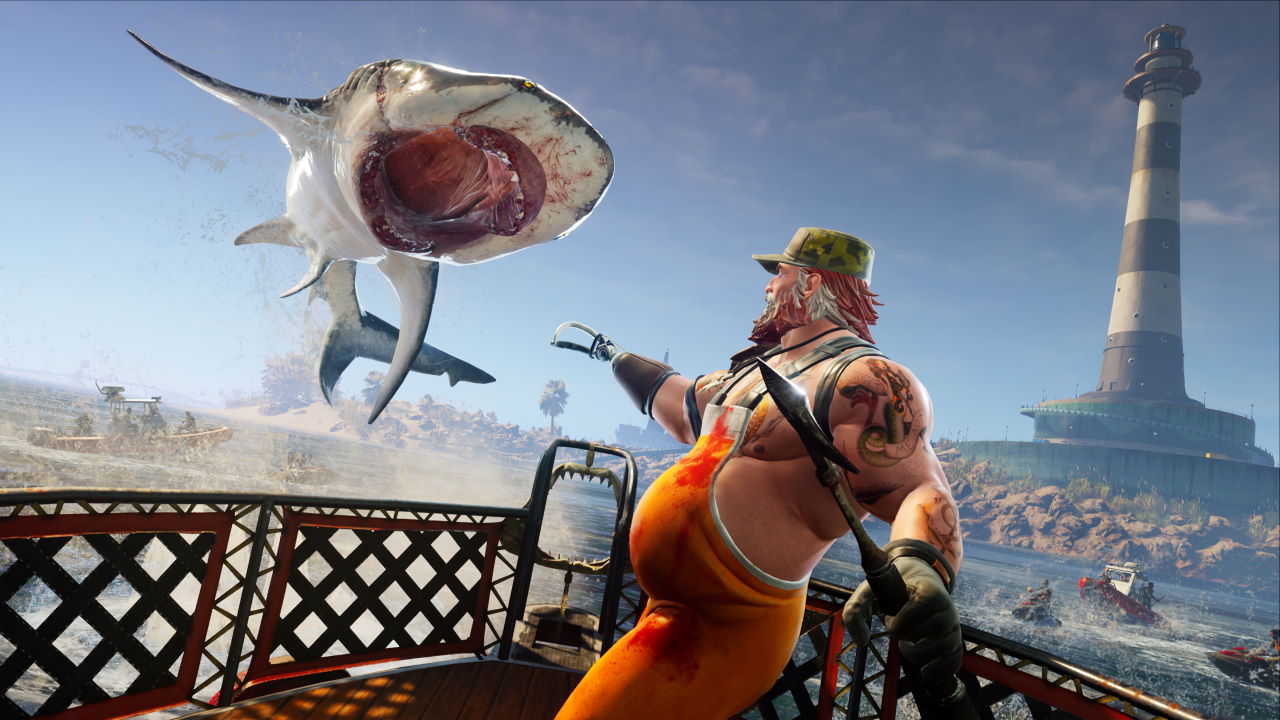 Many video games, at their core, are power fantasies. Whether you’re fantasizing about being a superhero or a roguish scoundrel, we’re all playing at being someone or something that’s smarter, better looking, or more powerful than we are ourselves. And there’s not really anything more powerful than a shark. Right? I mean, maybe a few things…perhaps polar bears? Octopi are definitely smarter, but not stronger. And the setting really matters. Anyway…sharks are stong. Video games are often meant to make us feel strong. Hence Maneater!

In Maneater you play as a young bull shark, setting out into the new world with bright eyes and an innocent soul. Or rather you would be doing that had a crazy shark hunter named Scaly Pete not murdered your mother and marked you for his inevitable slaughter later on. But his arrogence gives you an opening for revenge, you just need to get strong enough to take him on. To do this you just need to eat everyone and everything in your path toward that revenge. What this entails is a whole lot of swimming around, eating humans and various sea creatures, and taking on sometimes more powerful predators for dominance of the ocean.

The story of Maneater is pretty bare bones and doesn’t really go anywhere in the end, relying instead on its style and humor. Everything is framed as a reality TV show following the exploits of Scaly Pete, though this is basically just an excuse to have Rick & Morty’s Chris Parnell read off some pretty hilarious lines about what you and Pete are up to. It totally works too, delivering some truly laugh out loud moments. Anytime a narrative device relies on semi-random musings I always brace for it to get repetitive, and while some lines get said a few too many times, this mechanic works very well at establishing the tone of the game. 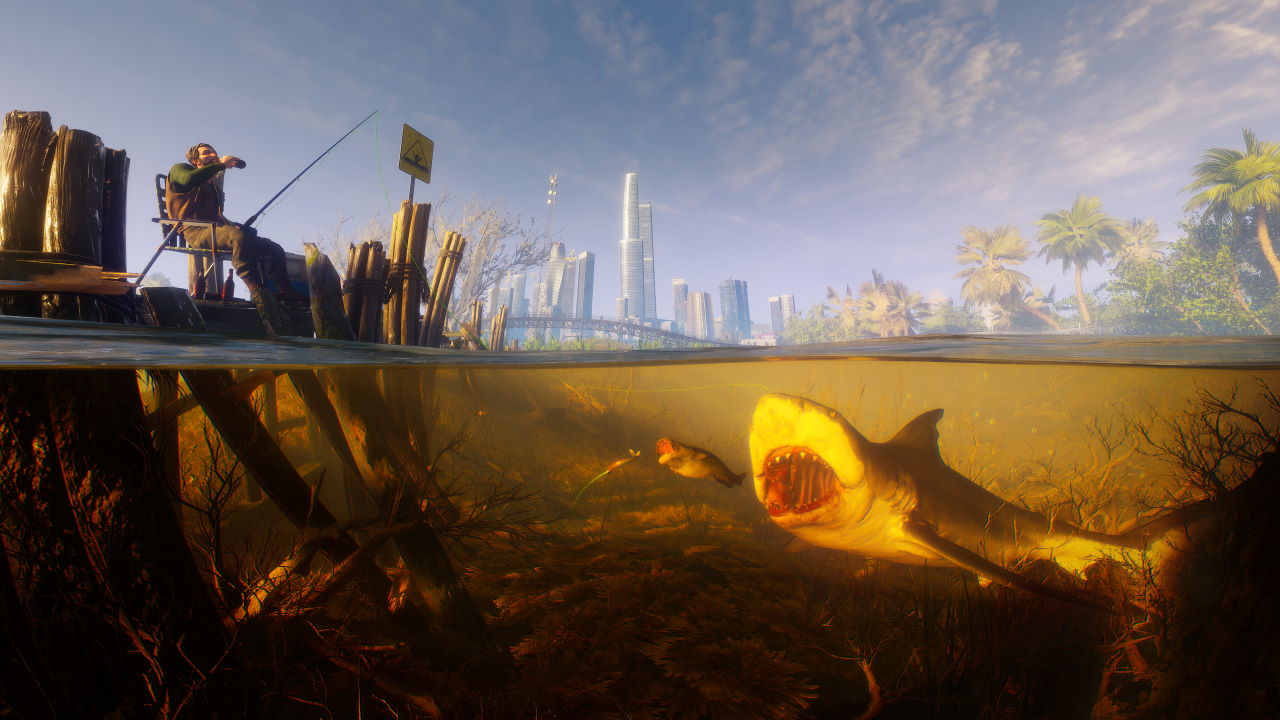 Maneater feels like a game ported straight out of the early 2000’s in a lot of ways, none moreso than its world and overall tone. Absurdist, but only to a certain extent, it’s like the world and its chracters are dialed up to 11 or possibly even 12. Swimming around the shores of the gulf you’ll find hilarious vignettes involving movie references, environmental satire, and just a general vibe of irreverence that works exceptionally well for the majority of the game.

Likewise, the gameplay has the feeling of those now 10-20 year old games, such as Destroy all Humans and Mercenaries. Remember when games were just kinda fun and didn’t chuck tons of random systems and mechanics at you to justify their purchase price? That feeling is alive and well in Maneater, which plops you into the gulf and just lets you be the shark you’ve always wanted to be. You swim around, you eat stuff, you gain new abilities through the things you eat. It’s all rather simple, though with so few unlockable upgrades, especially early on, it can feel a bit too simple. But if that’s what you’re looking for then Maneater delivers it quite well.

The game bills itself as an action RPG, but feels more like a very light Metroidvania, or just a straight action game with the barest of RPG mechanics sprinkled in. You do grow in power and ability, but it moves slowly and is more tied to your progress through the story or random stuff you find rather than actual choices made by you. There are different organs and body parts you unlock that give you powerful new abilities, all of which can be upgraded with in-game materials, but they’re doled out so slowly and don’t offer a ton of variety, so most players will use a few and not really tinker until they enter the postgame.

However, getting there could be a challenge for some, especially those who dislike repetition. You see, all eight main areas of Maneater’s map boil down to the exact same set of objectives. You enter and find the Grotto (safe area) then branch off to handle missions which are always eating a certain type of animal, killing a specific predator, and/or eating a set number of humans which then prompts a shark hunter response (which offers a progression track of its own with upgrades as a reward). Once you accomplish enough of this and the optional objectives that fit this same mold you watch a cutscene and move to the next area. 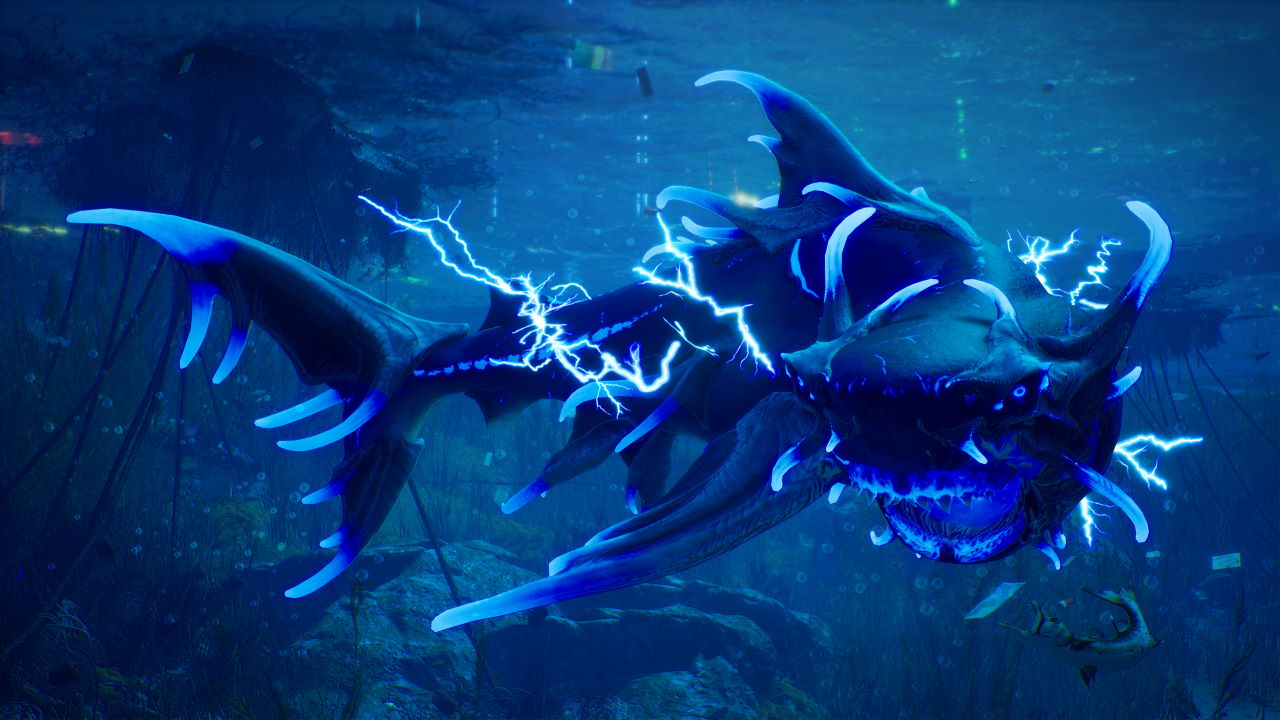 There’s just no variety to what you do or what you encounter. Even the bosses of each area battle the exact same, with only minuscule variations in how they behave and how you defeat them. Your second hour with Maneater will feel just about the same as your twentieth aside from how strong you feel as you do it. This is because Maneater does actually deliver on that promise of power fantasy. You do feel like a strong and deadly shark, even if the well designed controls don’t work 100% of the time. And as you grow and upgrade your character you do start to get the sense that you’ve become better and more powerful within the game.

Remember Feeding Frenzy? It was a simple game that delivered a specific delight. You started small and by the end of the level you became the big fish in the sea, chomping away at anything and everything, including those larger fish that used to present huge danger to yourself. Maneater does the same thing over a larger portion of time. You work harder for the feeling, and by the end it’s quite satisfying as you chomp away on hammerhead sharks that used to feel like bosses to you. But there’s always a bigger fish, so you head to the next area and somewhat repeat that process.

The difficulty curve is a bit busted though, and this can fail this sense of accomplishment at times. If you spend too long in one area you’ll enter the next already capable of demolishing even the top tier predators. And even without doing this, just by meeting the prescribed minimums for finishing the current region, you may enter the next feeling like not much has changed besides one or two stronger beasts that just require some additional patience on your part. 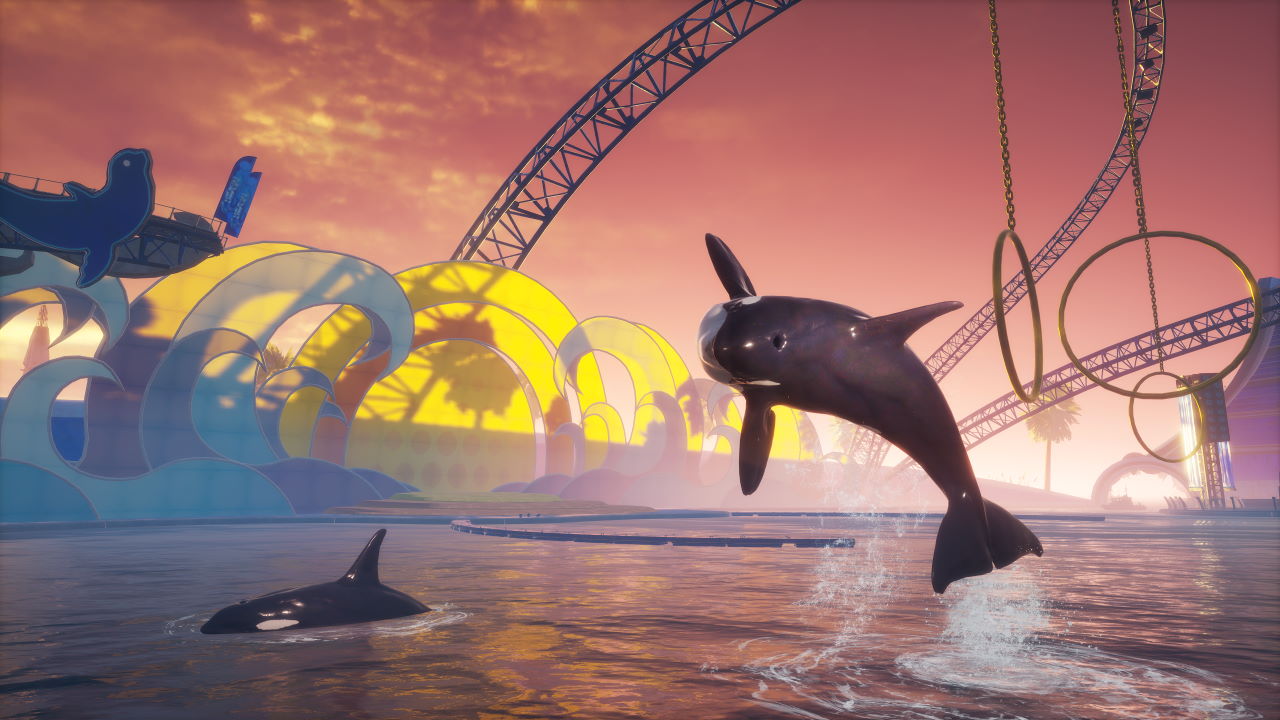 Playing Maneater I got the sense that the game was just shy of truly achieving all it wanted to. It nailed a lot of what it needed, but failed at the fringes. The world is expertly designed and looks great in Unreal Engine 4, there’s just not much meat to it beyond the visuals and offhanded references. The controls are solid, despite a few cases where things get pretty wonky. Animations are passable, but can glitch out occasionally. The game also desperately needs a better lock-on system, since it basically has none. The core gameplay works way better than it has any right to, it truly feels great just swimming around and chomping down on any fish that crosses your path. But once you settle into that pattern it doesn’t really deviate to any extreme.

Why not have a mission that tasks you with hunting a fish, tracking it using your keen sense of smell? Where’s a mission featuring an unstoppable shark hunter chasing you forcing you to lead him into a trap? How about having an area be too polluted to enter at first, requiring you to move from safe place to safe place as you navigate? Any of these would have broken up the monotony of the current formula and would have elevated the entire experience to where it feels like it could have been.

Maneater sets out to deliver a specific experience and ends up nailing that, but not much else. It’s a lot of fun, and I found myself going back to it quite happily. But the further I got into the game the more the cracks showed themselves. With a slow and anemic set of upgrades and completely repetitive missions, many will be disappointed with the overall experience. But the core gameplay is a joy when it is clicking and it feels like the sort of game that many gamers have been asking for for years. And with a budget launch price that seems like it will be a pretty fair tradeoff for many.