Mario and Sonic at the Olympic Games Tokyo 2020 Review

Go for the Gold. 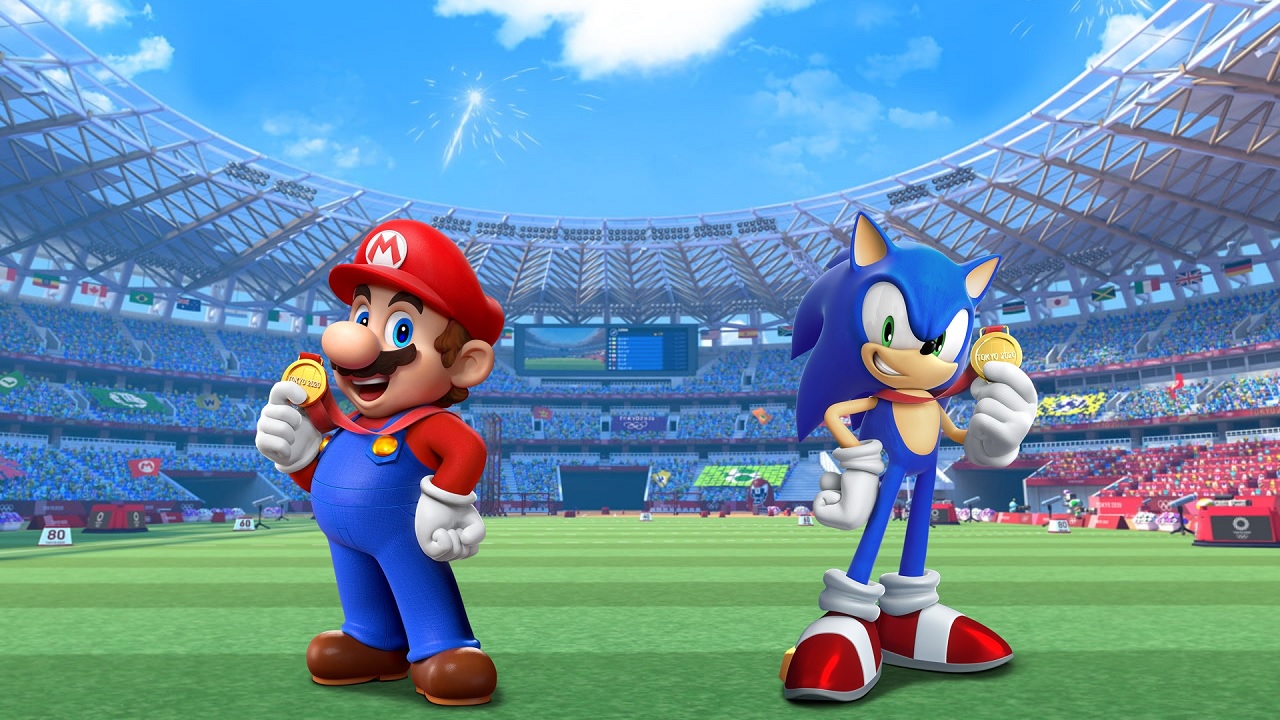 Mario and Sonic were once the fiercest of rivals in the video game industry as Nintendo and Sega were battling for supremacy during the 16-bit era. The two companies started working together here and there after Sega dropped out of the console race, which eventually led to Mario and Sonic at the Olympic Games for the Nintendo Wii. After releasing every two subsequent years to celebrate another Olympics, the series took a hiatus after the 2016 Rio Summer Olympics, but now the two titular characters have teamed up once again for Mario and Sonic at the Olympic Games Tokyo 2020.

The Mario and Sonic series has typically been regarded as merely okay, with Mario and Sonic at the Olympic Winter Games being the most well regarded entry in the series. This has mostly been as a result of typically bare bone experiences that didn’t offer much in the way of too much new content game to game besides the switch from Summer to Winter Olympic events. Mario and Sonic at the Olympic Games Tokyo 2020 looks to buck this trend though by implementing some unique new additions that bring more to the table this time around. 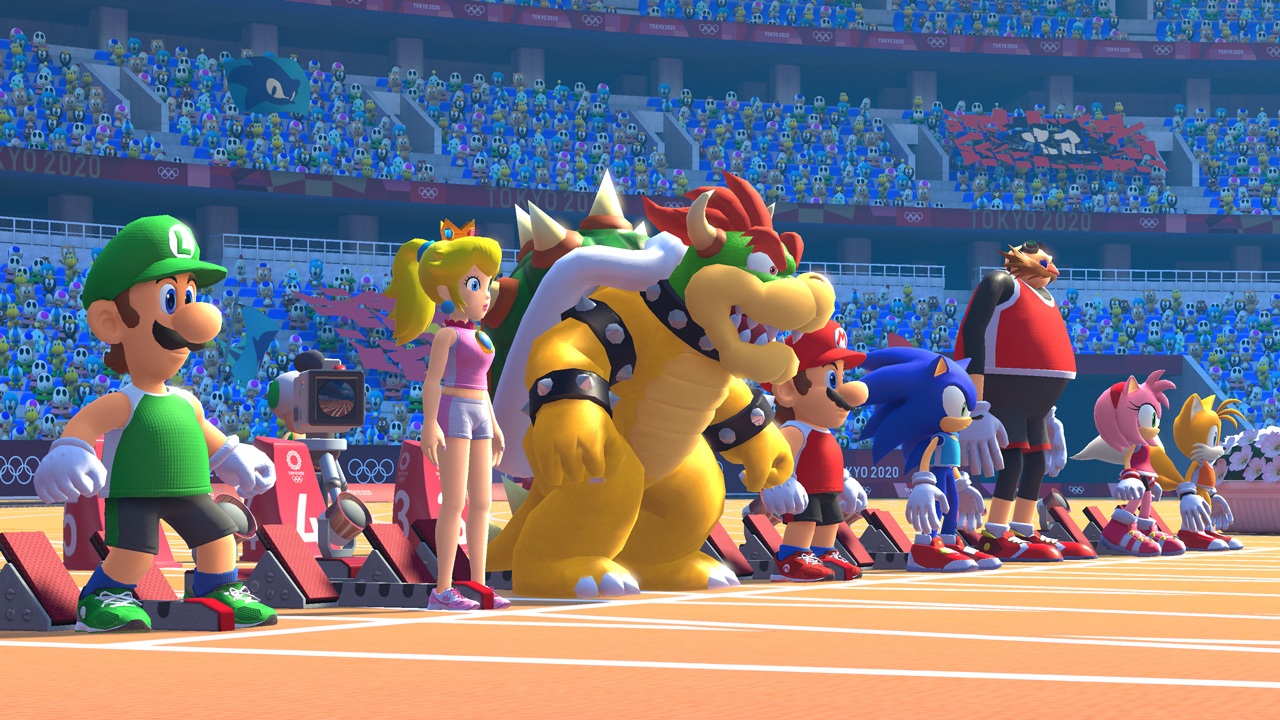 As you would expect from an Olympics game, Mario and Sonic at the Olympic Games Tokyo 2020 has a number of events for you to play that you would typically find at the Summer Olympics. These are done through the game’s Quick Match mode, which can be done as a single player against the CPU or with 2, 3, or 4 players in splitscreen multiplayer action. The game offers a great variety of different events to take part in, including 100m, Table Tennis, Swimming, and Surfing, for a total of 21 regular events under the Tokyo 2020 option. Dream Events are also back here as well, with Dream Racing, Dream Shooting, and Dream Karate that take basic ideas from those events and pairs them with the two franchises in different ways.

That is far from all that is offered in the game events wise, as one of the big selling points of this edition are the Tokyo 1964 events. These 10 events are designed in a 2D style that takes both Mario and Sonic back to their starting points. These mini-games often do not have the complexity of the 2020 ones, since you are required to perform them with simple button inputs only, but they are a lot of fun to play regardless. The quickness of these events are what really make them a lot of fun to play with friends, offering something that sets this entry apart from any of the past games in the franchise.

The control scheme offered in the game varies depending on the events, as mentioned above with the limitations on the Tokyo 1964 events. While those events must use the Buttons Only play style, many of the Tokyo 2020 events offer two additional options. The first of these is to use two Joy-Con controllers separately, while the other is to use a single Joy-Con. Even with the Buttons Only version, there are still some events like Discus Throw that require some use of the Gyro motion controls with even the Pro Controller. The variety of controller options is very nice to see, with the Buttons Only option being a great alternative for people that hated the reliance on motion controls in the past. 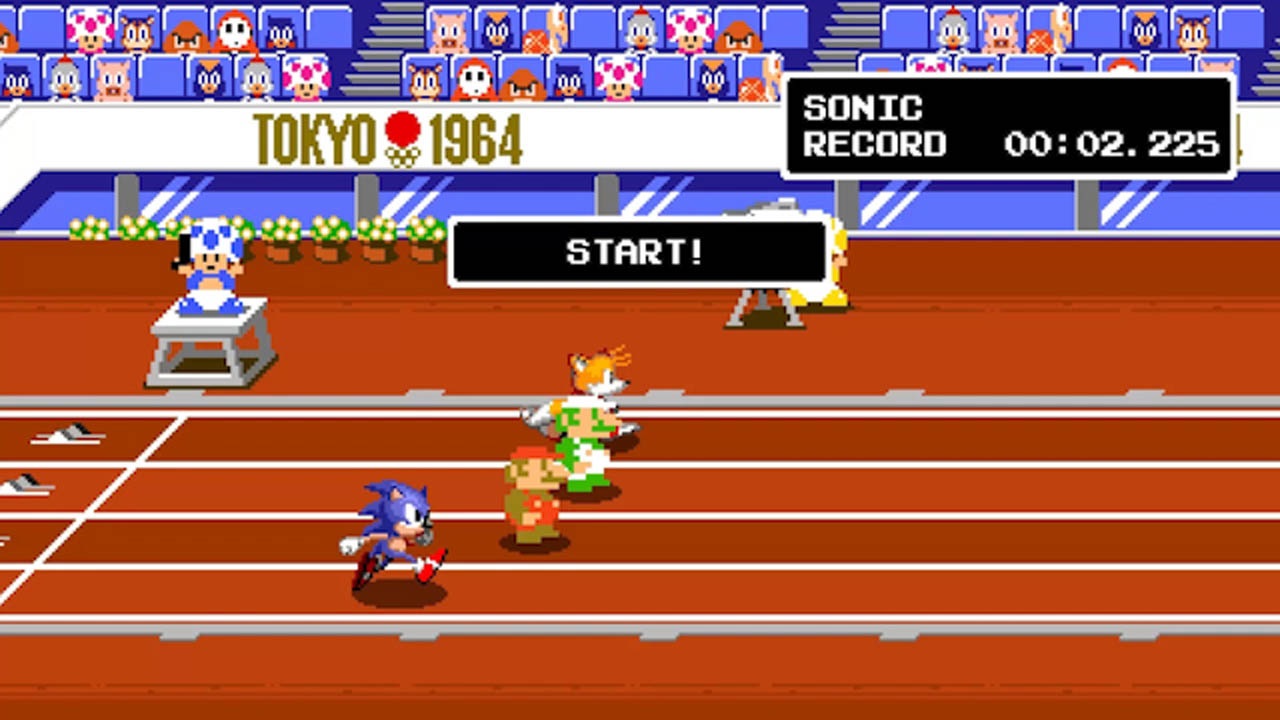 Mario and Sonic at the Olympic Games Tokyo 2020 also includes a Story Mode for players to enjoy solo that brings the 1964 Tokyo Olympics into play. The plot is pretty basic, as Mario, Sonic, and Toad receive a mysterious gaming system, with them asking Luigi if he can help them figure it out. Little do they know that this is part of a grand plan concocted by Dr. Eggman and Bowser to trap them inside of the game. However, Bowser messes things up by showing up and Luigi ends up hitting the button when Bowser and Dr. Eggman are nearby too, trapping everybody but Luigi inside. This leads to two parallel stories unfolding, one inside of the game and one outside of it.

The five characters that were trapped in the game device are transported back to the 1964 Tokyo Summer Olympics, with each of them being represented with a retro visual style. While definitely not from 1964, Mario, Bowser, and Toad look like they are taken right out of the classic Super Mario Bros. and Sonic and Dr. Eggman look like they are directly from the original Sonic the Hedgehog. This classic art style is not just for the characters either, as it also comes into play with the special 2D events as well that were discussed prior. Meanwhile, Luigi goes on the search outside of the game and enlists many of the favorites from both series, including Tails, Yoshi, and more to help save Mario and Toad from being stuck forever thanks to Bowser Jr. and Dr. Eggman Nega’s shenanigans.

Regardless of which characters you are controlling within each chapter in Story Mode, the basic setup is pretty much the same across both. There will be some dialogue to start between characters, with some legitimately funny moments occurring here, though the majority of that is found on the 2D side of things with Bowser and Dr. Eggman. After this dialogue, you either will participate in an event or you will be told to leave said area and find someone. The present day part has a lot more moving around between venues, with it being cool how they implement all of the real world sites here. There are even trivia to collect throughout these areas that provide you with information about the characters or the Olympics themselves. You can technically wander around between sites as well, but the game makes it very easy to know where to go by lighting up the correct location. Sometimes you will end up having to go between a few different areas, but it typically culminates in some sort of Olympic event. For those events you are struggling to win though, you can skip after failing three times, which helps to keep players from getting stuck in the game.

The retro segments also have something really neat here with special mini-games that you must complete to advance in the story mode. These include a number of different races that are each quite different, such as a neat take on classic games like Rad Racer and Outrun where Sonic has to catch up with Dr. Eggman’s vehicle before the end of the race. Once completing these mini-games, you can also unlock them to play elsewhere from the main menu in what is known as the Game Room, which was a great idea to add more replayability to the game. While not the first story mode in the franchise, this one is certainly the most enjoyable of the bunch so far. You should still not expect a ton of depth to the Story Mode, but the characters make it a lot of fun and the events and special mini-games are interspersed well. 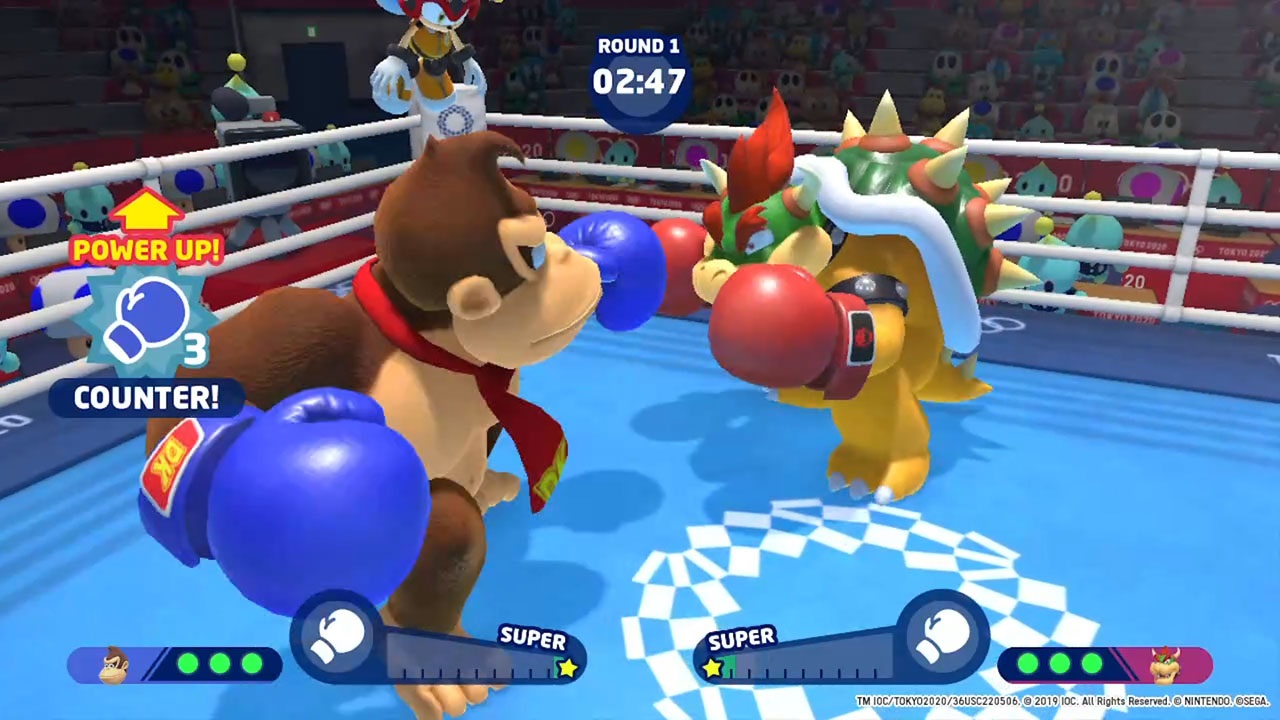 Beyond the local splitscreen multiplayer option mentioned before, Mario and Sonic at the Olympic Games Tokyo 2020 also offers additional multiplayer options with both Local Play and Online Play. Local Play allows you to play with others through a local Wi-Fi connection using individual Switch consoles and copies of the game. Online Play takes things much further, by letting you play with others around the world through Ranked and Free Match styles. Playing with friends locally really adds to the party game setup, but it’s also great to be able to take the game online as well.

Moving above the mediocrity that has often plagued the series in the past, Mario and Sonic at the Olympic Games Tokyo 2020 is without question the best entry thus far, even if the mini-game and party structure is not for everybody.