The latest news in the world of video games at Attack of the Fanboy
March 22nd, 2017 by Dean James 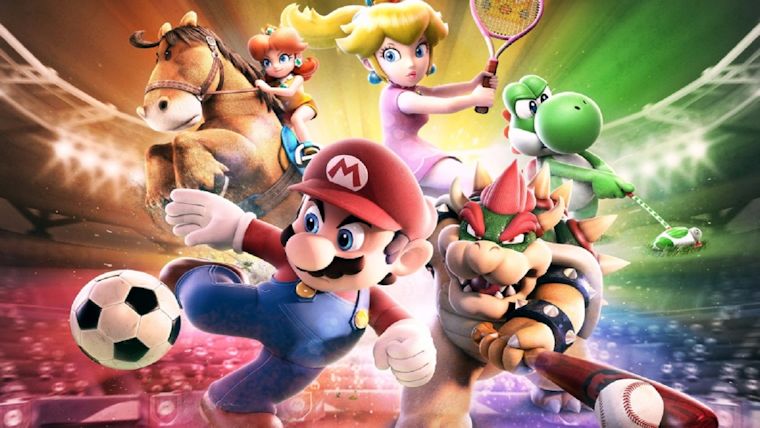 The Mario franchise has had various spin-offs over the years, with Mario and company taking on an array of different sports across numerous games. While some of these have been solo focuses, such as the popular Mario Tennis and Mario Golf franchises, the latest mostly takes parts of existing games and puts them into one bare bones experience in Mario Sports Superstars.

The previous Mario sports compilation game, Mario Sports Mix, featured a number of exclusive sports like hockey and volleyball, but the co-developers behind Mario Sports Superstars, Camelot Software Planning and Bandai Namco Studios, instead decided to mostly focus on more typical sports that Mario is known for, as well as one new sport.

Mario Sports Superstars’ four returning sports are tennis, golf, baseball, and soccer in similar form to their past iterations, with horse racing being the completely new addition to the game. From the very start, each of these are selectable from the main menu, though you will go through a short tutorial your first time trying out each one.

At this point, each of the four returning sports are handled in pretty much the exact same way. Mario Sports Superstars offers a very simplistic single player for each of these sports, with you able to either participate in the variations of exhibition or tournament mode, as well as a training option. Exhibition is as you would expect, with you just doing one game or match, but there is a little more available with tournament mode. 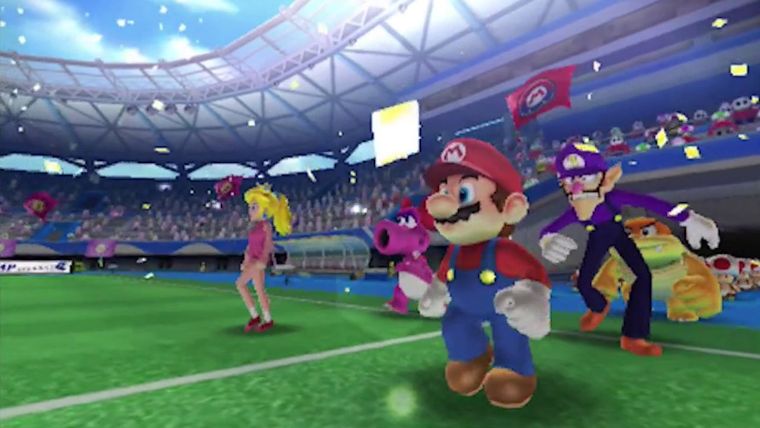 Tournament is pretty much the same with all sports, with you choosing your playable character and potential other captains or teammates, depending on the sport. Just like past Mario sports games, the tournaments are split into three different cups for you to choose from, Mushroom, Flower, and Star. There really isn’t anything improved from exhibition here other than the fact you’ll play multiple rounds in a row until there is a champion.

The game also offers two multiplayer options for each sport, with you able to play locally or nearby. Nearby allows you to set up a room to match up with friends that also have a 3DS in the same room. Online is split into two options though, with you able to take on your friends or random players from around the world. While Nintendo’s online has been hit and miss over the years, each match that I participated in online worked quite well with next to no lag.

Breaking down the individual returning sports, what you will find are basically the most basic experiences to date for each of these, which is really saying something after the disappointing Mario Tennis: Ultra Smash in 2015. The tennis in Mario Sports Superstars is as you would expect, with you facing off against one or two opponents at a time. You do have a few techniques at your disposal for hitting the ball that depend on the button or buttons you press while hitting it, but they aren’t always the most responsive. The namesake of the previous game, Ultra Smash, is back as well, which is a nice touch, even if the games can get pretty monotonous at times. One weird aspect of this is that you can’t do a Doubles tournament, though you can still do Doubles in exhibition mode, which is disappointing.

Like Tennis, Golf is the other Mario sports title that has had greatness in the past, with the last entry on the 3DS being very solid as well. However, what really made a lot of those games great was not just the golfing itself, but what surrounded it. In fact, Camelot was well known in the past for their very involved Mario Tennis and Mario Golf related games, even adding in RPG elements at points. Even though this level of detail isn’t included, at least the golf gameplay that remains is still solid. Tournament has you participating in three hole matches against another opponent, with varying levels of difficulty. Golf can often be difficult to master, but thankfully it is very approachable and easy to learn in Mario Sports Superstars. 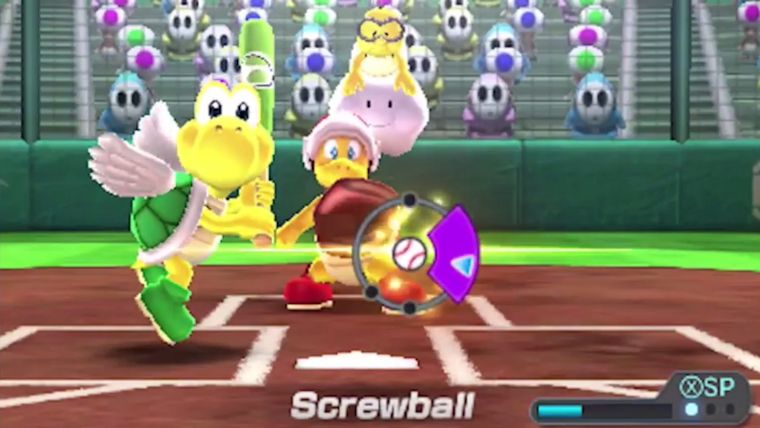 Baseball features a three inning setup that has you doing both the hitting and pitching. Like the previous Mario baseball titles, the gameplay is more advanced than say Wii Sports Baseball, but it’s still pretty simplistic. Pitching consists of you choosing your pitch from only a few options, aiming your target, and then trying to press the button at the right time for the best pitch. What does get a little more complicated is the batting, where you can hit A for a power swing or B for a contact swing. However, you can also move your zone a bit to where you can get a much better hit on the ball, though there is some risk as the ball could be pitched to the opposite side of the plate instead.

Similar to the rest, soccer is also available in a more stripped down version than its solo efforts. By picking a captain and co-captain from the playable characters and then the rest of your team from the teams of characters like Toad, you can then go into a match. The character movement feels smooth, but there isn’t a lot of depth overall. It does offer full 11 on 11 matchups, which is very much appreciated, though there isn’t all that much to it beyond what you’d expect.

More stripped down version than its solo efforts.

While horse racing is all new to the Mario sports subseries, there is something very familiar feeling about it. At its basis, it almost feels like the horse racing system from The Legend of Zelda: Ocarina of Time, though with a few new mechanics. Besides choosing your jockey, you will also have to pick out a horse to ride, which feature vary in stats like speed and turning.

Horse racing itself is pretty easy to learn, with you having a stamina meter that depends on the horse you’re using. By pressing B, you can get a little boost, but you have to make sure not to use up your entire stamina meter. This can be replenished by little carrot bubbles that are found all throughout the race. In addition, there are a number of bubbles with stars, which allow you to use Star Dash if you collect enough. A number of these can only be gotten by jumping, which you will need to use quite a bit to jump over obstacles in your way. Horse racing as a whole is quite fun, but it can definitely get tiresome before long due to the limited number of race tracks and different looking locales.

Unlike the four other sports, horse racing actually has an additional little mode available known as Stable. This allows you to create your own horse and take care of it, including brushing it, cleaning it, feeding it, and even choosing its saddle and such. You can also walk around the farm and other nearby tracks with your horse, where you can discover new items. This is a neat little addition for those that are interesting in the digital pet side of it, but it’s unlikely to really sell you on the game. 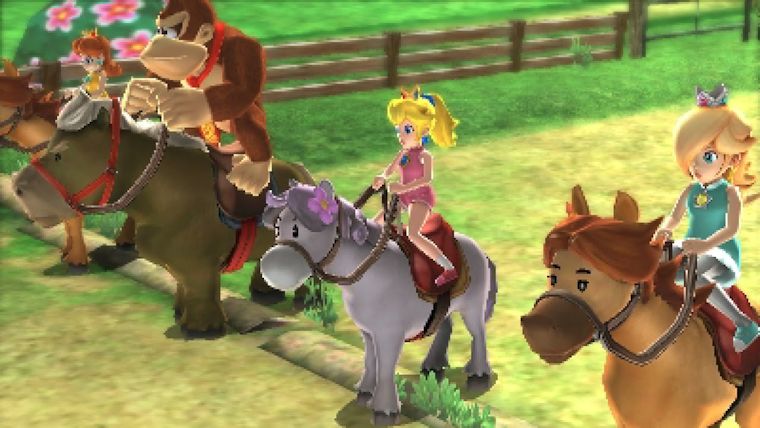 The game also has launched alongside a new line of amiibo cards that can be used in the game. The cards feature a specific character and sport, which then allows you to import them into the game as a stronger version of the already existing playable characters. This is a nice little add-on, but you will have to buy the cards separately if you want to enjoy it fully.

Mario and friends have tried out a number of different sports over the years and the latest struggles to live up to that long legacy. The core gameplay of each of the sports is solid, but it feels like the most basic form of each was plucked from a superior title, plus the addition of the decent horse racing as well. Mario Sports Superstars could have been an all-stars compilation of the Mario sports titles, but instead ends up as far from a home run experience.