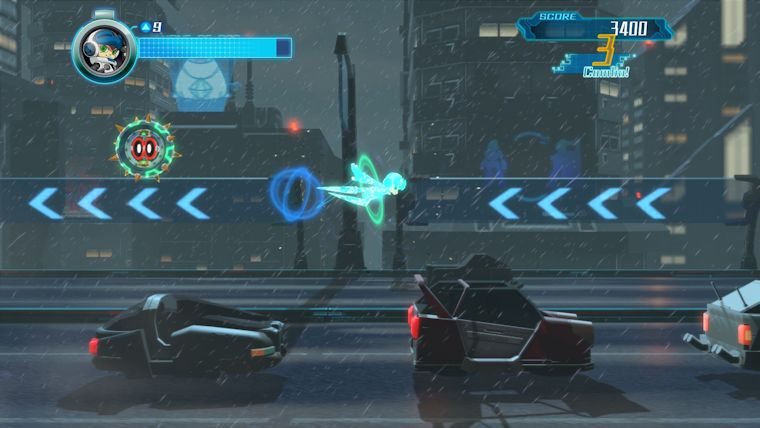 Keiji Inafune has long been one of the most well known and respected names in the video game industry, often being called the “Father of Mega Man.” After departing Capcom in 2010, he started his own development company with Comcept and held a very successful Kickstarter campaign for a spiritual successor to the Mega Man franchise, which after a very arduous development process that saw many delays has finally arrived with Mighty No. 9.

Set sometime in the indeterminate future, in which there are 52 states, Mighty No. 9 follows a very similar premise where a robotics designer named Dr. White has created a roster of androids known as Mighty Numbers, of which the protagonist Beck is the ninth. The other eight have gone rogue due to being assimilated by outside forces and Beck’s missions is to free them all, which is a nice little change from most of the Mega Man franchise, though most of the story cues feel all too familiar.

The actual gameplay itself is pretty standard from what you expect from an Inafune title. You will face an intro stage, followed by eight Mighty Number stages and then a few final stages. Each of these levels features side-scrolling platforming, which does a solid job at providing players a style of game that has been missing the last few years. The levels all feature different elemental themes and obstacles, though some can get a little overused between multiple stages. The designs themselves are somewhat hit and miss, though stages like Highway and Capitol Building are standouts in their setup.

Beck himself has an arsenal of weapons at his disposal by the end of the game, but at the start he has but a few. He comes equipped with an arm cannon that you can continuously fire by tapping the attack button, though you cannot charge it at all. Dashing is part of his moveset from the outset as well, which has use beyond just being used to jump across gaps.

One aspect of the game that is completely original is that all of the robots in the game are made up of what are known as Xels, which are absolutely vital to the gameplay. Rather than just straight up shooting every enemy with your weapons and it dying rather quickly, it takes much longer to outright kill them. Instead, after a few hits, they will start to glow a certain color, which means you can dash with R1 and absorb the Xels from these enemies, which helps to restore your weapon meter depending on how quickly you do so.

The Xel system sounds quite intriguing on the surface, but the manner in which it is executed in the game is far from perfect. Just how close you have to be to a glowing robot seems to different throughout the game, with the preciseness being a problem. The fact you have to dash into the creature is fine as it wipes them out, but when you’re fighting more than one and don’t have the ability to shoot through the first one, you will find yourself getting damaged through dashing, as the dashing leaves you vulnerable. The Xel system definitely has a good bit of potential, but it can wear out its welcome pretty quickly in just how much it is used.

This is not to mean that the gameplay isn’t fun, as it really can be, especially when you get to the boss battles. At the end of each of the main stages, you will face one of the Mighty Numbers, each with a completely different style boss fight. The first one you choose will have to be defeated with just your arm cannon, but in exactly the same way as its spiritual predecessor, Beck will absorb the abilities of his defeated and now saved friends. These can then be used throughout the stages themselves, being replenished by absorbing Xels, and are more useful against specific bosses, including some of the end bosses.

After collecting these new weapons, the game will actually advise you on which level to tackle next by adding an “Advice” option below that level, which does take away some of the mystery that players had with trying to guess elemental weaknesses in the past. However, now it is spelled out completely. The levels themselves can be kind of tricky difficulty wise, but the non-boss enemies should be a cake walk throughout. Luckily, for those looking for more of a challenge, the game does offer a higher difficulty level option. 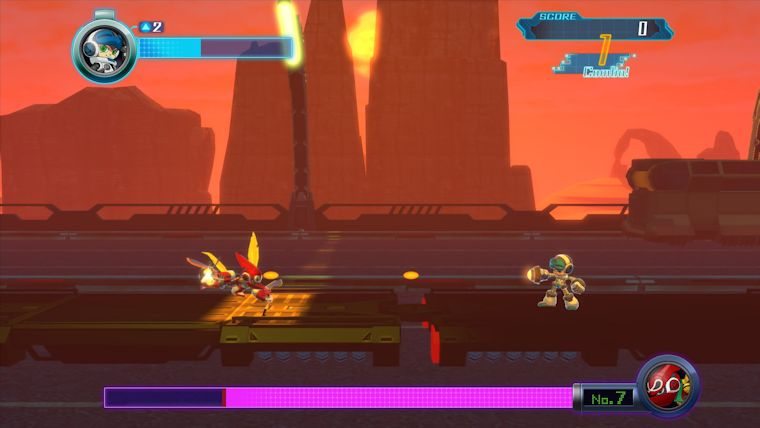 After completing the eight Mighty Numbers, the end is near as you open up a few new stages, of which one is based on Beck’s female counterpart Call that was previously found only in the cutscenes. She plays a little differently from Beck, as she cannot absorb Xel, but rather can hover in air and create an energy bubble that protects her. The Call stage one of the stretch goals in the Kickstarter campaign, so it’s great to see it included, but it feels totally misplaced by making it a requirement to unlock the final stage with these changes in the gameplay mechanics that are more stealth based, to then go right back to Beck.

A little too much reliance on the past

Rather than going with 8-bit graphics, such as with the more recent Shovel Knight, Comcept and Inti Creates forgoes this for a more modern style that combines 2D and 3D animation. You has been done well in countless games over the years, but in Mighty No. 9 is is just downright plain looking. The backgrounds are mostly uninspired throughout, with many repetitive locations within each stage that really do not stand out at all, though Highway does stand out above the rest. Other side-scrollers in recent years like Donkey Kong Country: Tropical Freeze offer astounding backgrounds, while the ones here just feel dull and completely unforgettable. The characters models are also merely okay, though some of the actual designs themselves are definitely vintage Inafune.

Having a rocking score can often help offset lackluster visuals, but the background music found in Mighty No. 9 is far from memorable as well. The stage tracks all blur together for the most part, with none of them really leaving any sort of lasting impressions. The voice acting isn’t really any better either, though it does somewhat capture a little of that campy vibe that it appears they were going for. 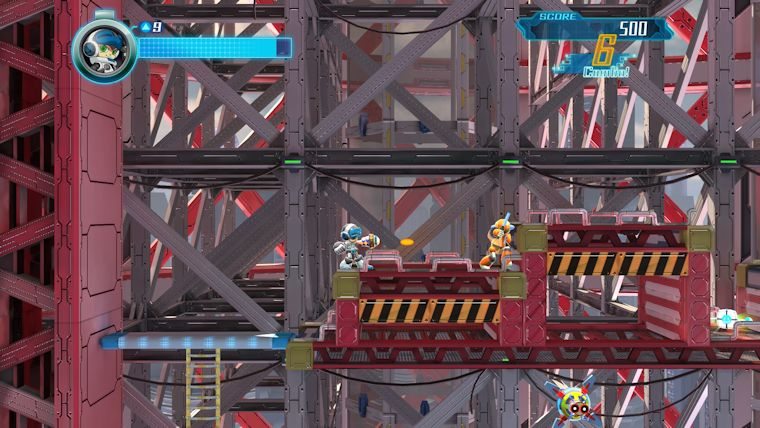 One of the issues that caused a few different delays for Mighty No. 9 was said to be the online play and as of this time, it has still be near impossible to find a match. These challenge races match you up with someone else, but the problem is that to even unlock this game mode, you have to have defeated all eight of the Mighty Numbers. This is something that not many have done just after release, severely limiting the pool of players that can participate and making matchmaking a big problem.

Mighty No. 9 takes the spiritual successor title to heart by offering a near copy of many elements of the Mega Man franchise and injecting it with a few unique ideas. Even with dull visuals and a little too much reliance on the past, in a world where Capcom has seemingly forgotten that the Blue Bomber exists, Mighty No. 9’s enthralling boss battles make it an okay substitute to fill that void for the time being.