When it comes to potential Minecraft spinoffs, an isometric dungeon crawler is the last genre I would’ve thought of for the game. Then again, I suppose a narrative-driven Telltale adventure or a location-based mobile game were strange choices as well. The point is, the Minecraft universe is rife with charm and personality that’s just begging to be explored in other genres, and the world of Minecraft, with its many different mobs and items, can be translated to just about any genre you can think of. Minecraft Dungeons is proof that there’s more to the Minecraft world than just mining and crafting; it’s a foundation on which to build excellent video games.

As the title suggests, Minecraft Dungeons is a dungeon crawler set in the Minecraft universe. However, the Minecraft skin that Dungeons wears is much more than just a fresh coat of paint. While it bears a striking resemblance to other popular isometric action RPGs like Diablo and Path of Exile at first glance, Minecraft Dungeons streamlines many aspects of the genre so players can focus less on number crunching and min-maxing and instead skip straight to creating interesting builds and overpowered gear sets. As a result, Minecraft Dungeons is the most accessible dungeon crawler I’ve ever played, and it’s a perfect jumping-on point for those that typically stray away from this type of game.

It also helps that the game is surprisingly beautiful. It’s obviously not photorealistic, but the Minecraft style has never been as realized as this before. The entire game looks like a Minecraft parody music video from 2012 but in playable form (I know it’s an odd comparison but if you know what I’m talking about then it’s a spot-on comparison). The lighting is gorgeous and everything is smoothly animated, which really helps the blocky art style shine. 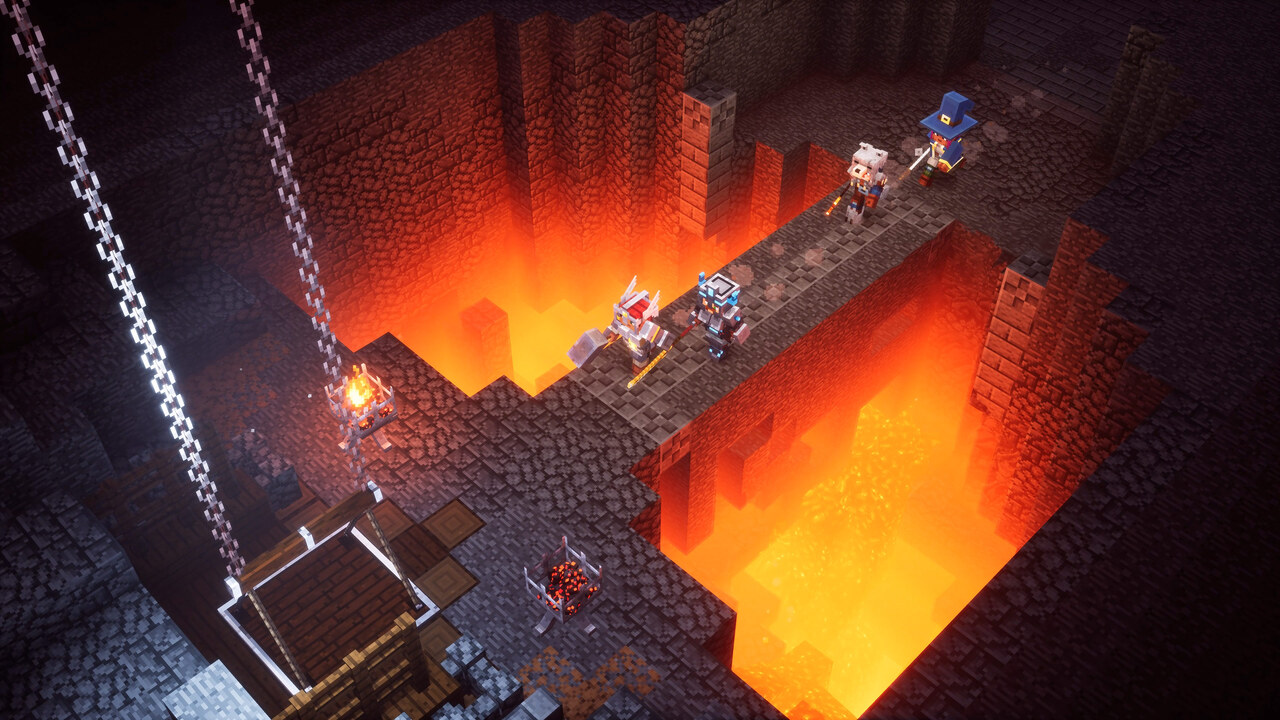 The combat in Minecraft Dungeons is simple but satisfying. You have a basic melee attack that changes depending on the weapon you have equipped, and you can fire arrows using a bow. There are no classes to choose from. You’re free to build your character however you like and you’re free to equip whichever weapons you want. You can also have three Artifacts active at once, and these special items will provide you with unique abilities that operate on a cooldown. These range from basic upgrades like explosive firework arrows to more elaborate items like a bone that summons a pet wolf or a totem that regenerates health. This combat system is nothing new, but the inherent joy of mindlessly obliterating hordes of enemies is ever-present in Minecraft Dungeons.

Every attack and ability feels fantastic to use as well. I seriously don’t know how they made Minecraft combat feel as impactful as it does in this game. Having spent a ton of time with Minecraft, I was anticipating the same weightless sword swings that I’ve spent a decade getting used to at this point. The combat in Minecraft Dungeons, however, provides just the right amount of feedback to make even the weakest attacks feel gratifying to use. Any doubts I initially had about the game’s combat were quickly dissolved the first time I saw a zombie ragdoll backward after being struck by an arrow. Tossing a block of TNT into a crowd of spiders is always a great time, too. The moment to moment gameplay of mowing down mobs is immensely engaging, and it’s very easy to fall into a rhythm and lose yourself for a few hours.

This satisfaction is amplified if you play Minecraft Dungeons with friends. The entire game is playable solo, and there’s definitely an appeal to mindlessly grinding away by yourself, but the real draw of the game is cooperative multiplayer. Four players can play together locally, or a group of four friends can join up online. Multiplayer is where Minecraft Dungeons really shines, and your group’s abilities and Artifacts can synergize in interesting ways. Chaining stuns, status effects, and buffs can really help during more hectic combat encounters, and your friends will absolutely yell in terror when someone spots a sneaky Creeper amidst a group of enemies. All in all, Minecraft Dungeons is a blast with friends, and having company can distract you from some of the game’s unfortunate shortcomings. 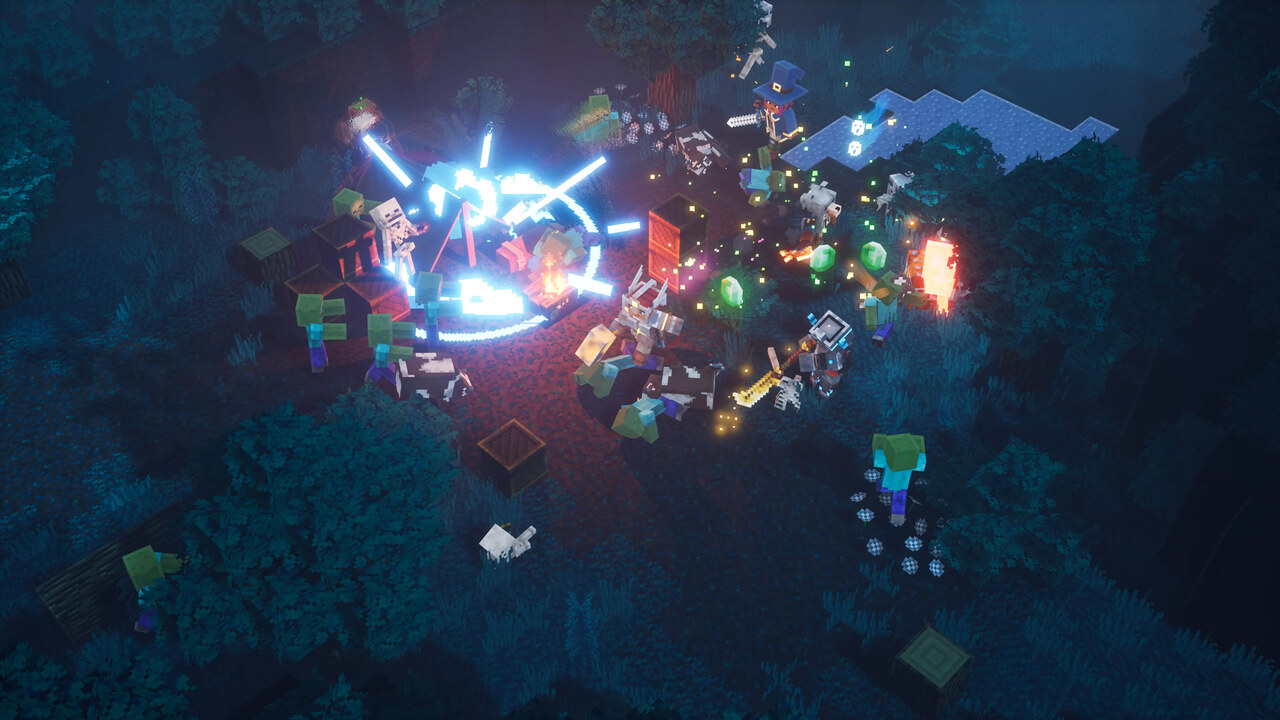 The biggest issue with Minecraft Dungeons is the loot. Loot is incredibly important in a dungeon crawler that expects you to play over and over again to secure that perfect drop, which is why it’s so disappointing that Minecraft Dungeons stumbles here. The game completely nails most aspects of its loot (more on that later), but it falters in one major area: variety. Only an hour into Minecraft Dungeons’ extremely brief campaign, you’ll have likely already seen most of the equipment the game has to offer. That doesn’t mean there aren’t really cool weapons and items hidden in the game’s higher difficulties, but the game’s overall loot pool is underwhelming.

It attempts to spice things up by offering rare weapons and armor with unique abilities, but even these are identical to the standard versions of swords, glaives, and other weapons, just with some flavor text and some sort of perk. There’s still enough substance to keep things interesting during an initial run, but repetition will quickly set in on subsequent playthroughs. Because of the smaller loot pool, there are no useless items in Minecraft Dungeons. Every single weapon type and armor set you come across is interesting, and the Artifacts in particular are great. They can dramatically alter your playstyle and you’ll likely spend most of the game swapping between different Artifact loadouts to try everything out. I just wish there were more of them.

The real grind in Minecraft Dungeons isn’t for specific weapon types or Artifacts, however. Enchantments are the real endgame. Every weapon, armor set, and bow in Minecraft Dungeons has three enchantment slots, and each enchantment slot has three possible enchantments to choose from. Once an enchantment has been chosen for a given slot, it’s locked in and can be leveled up three times. Every piece of gear has randomized rolls on enchantments, meaning the three enchantments you’re allowed to choose from are different every time. Each piece of gear also has a different number of slots available, with early game gear only getting a single slot and more powerful gear getting access to two or three slots. This system allows you to fine-tune your build, and it’s absolutely brilliant. 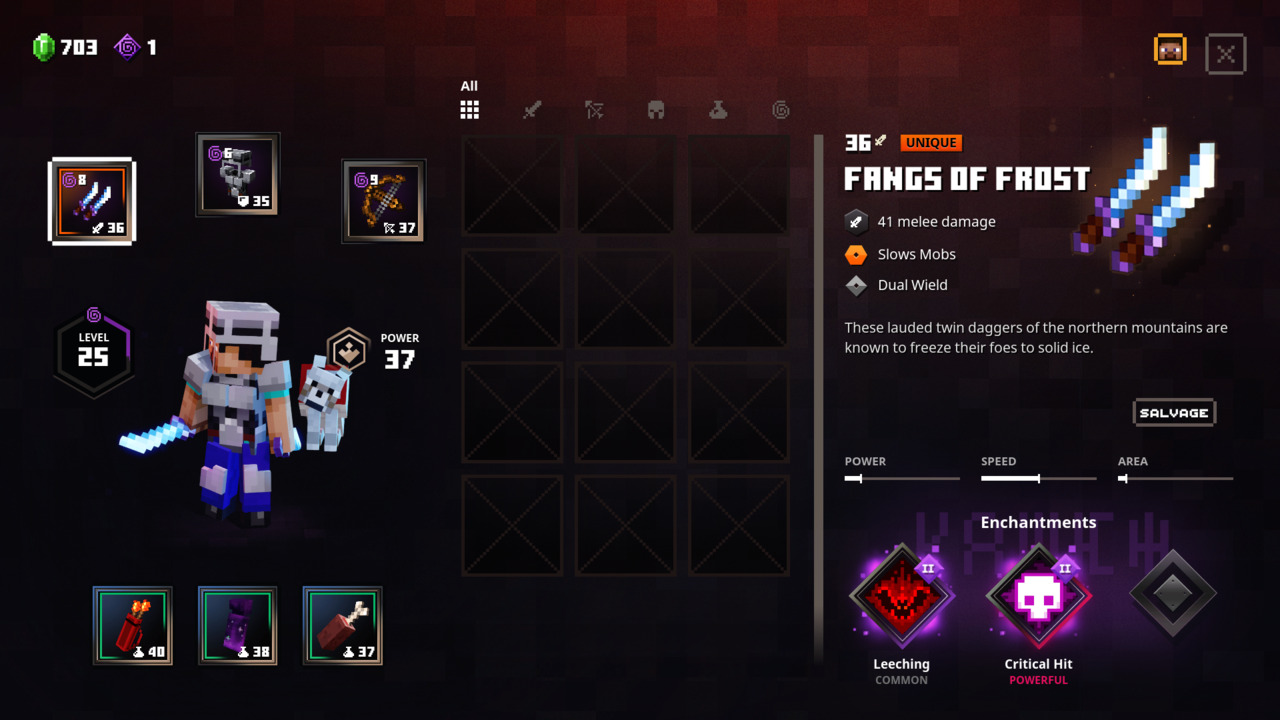 Minecraft Dungeons also doesn’t pull any punches with the enchantments it gives you. These aren’t tiny damage buffs or negligible stat increases. The daggers I have equipped in the screenshot above have Leeching, which gives me 6% of the health of every mob I kill, and Critical Hit, which has a 15% chance to trigger triple damage. With daggers that attack as quickly as these, critical hits pop off all the time and I don’t have to worry about healing too often. These aren’t even fully upgraded enchantments, either. My armor has the fully upgraded Thorns enchantment, which reflects 200% damage back at an enemy when they attack me. It also has Electrified, an enchantment that creates lightning bolts when I roll. By mixing and matching certain enchantments, you can achieve borderline broken builds. The best part about the enchantment system is that it allows for consequence-free experimentation. If you spend enchantment points on an item and either outgrow it or don’t like it, you can salvage it and get all the enchantment points back along with some extra money. All of these points can then be applied to whatever shiny new weapon you just picked up.

Enchantments add some much-appreciated depth to an otherwise fairly shallow loot system. They’re all insanely strong, even at level 1, and I constantly found myself shocked at how powerful some of them were. Want your attacks to decrease enemies’ attack damage by almost half? Sure! Want to toss a snowball at an enemy every second? Go for it! How about increasing consumable drop rates by 300%? Why not? Every enchantment is so incredibly fun to use, and picking which enchantment to put in a slot is always a tough decision. Having enchantments available right from the start makes Minecraft Dungeons immediately exciting, and you don’t have to grind for hours and hours just to get something that’s fun to use. 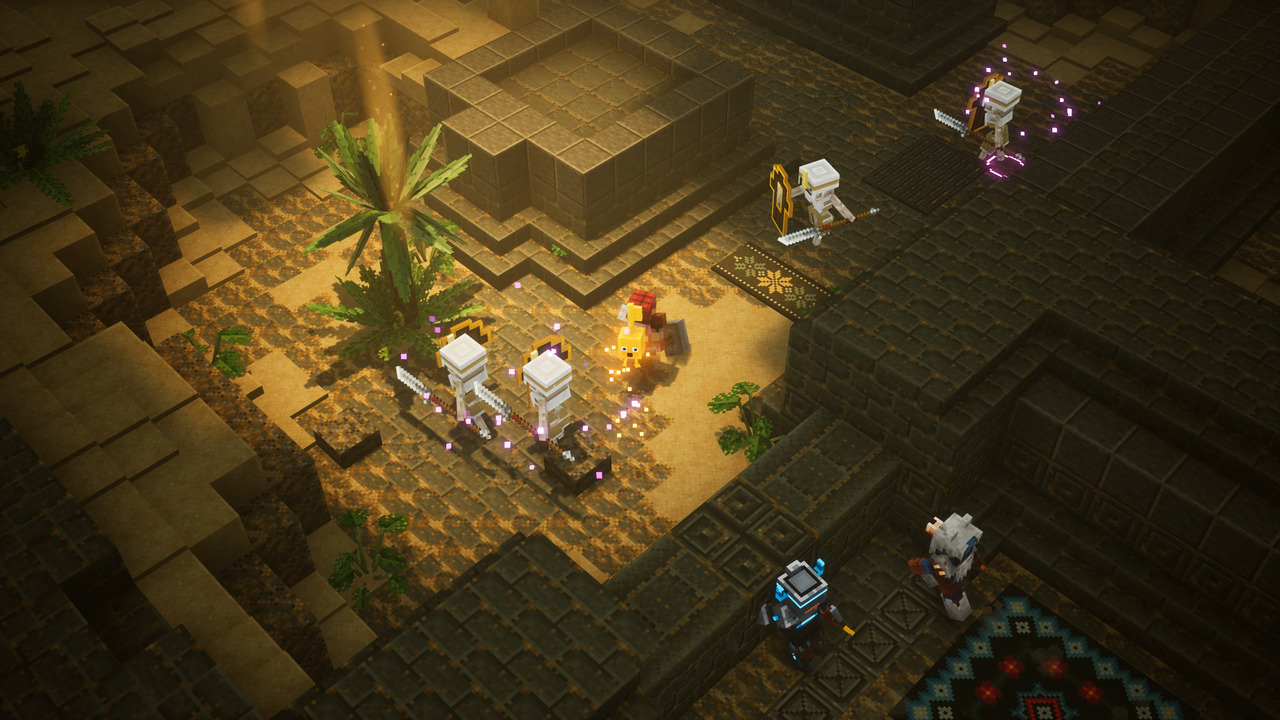 Unfortunately, Minecraft Dungeons doesn’t give you much time to mess around with its systems before the story comes to a close. Playing in co-op, I played through every level in the game and defeated the final boss in around three and a half hours. Minecraft Dungeons isn’t a long game, but its campaign is designed to be played multiple times in order to see everything the game has to offer. There are two additional difficulty levels to unlock after finishing the game once. Better gear is dropped on higher difficulties, and the recommended power level of each difficulty starts where the previous one leaves off, so there’s a natural progression from one to the next. Minecraft Dungeons is definitely worth playing through more than once, and the game really starts to get good on higher difficulty levels when you can really start applying multiple enchantments to items and messing around with different builds.

Even though it may be short, Minecraft Dungeons’ campaign features a broad variety of locations. Most of the locales correspond with typical Minecraft biomes, although some are notably absent, and they’re procedurally generated just like normal Minecraft. The procedural generation helps keep things fresh on repeat playthroughs, and levels rarely feel the same outside of a few repeated objectives here and there.

The one location that disappoints is the camp. The camp acts as a hub area between levels, but it feels like wasted potential. Initially, there’s only a table with a mission select map on it, but eventually, a handful of gear vendors show up. Despite everything important being relegated to a small section of the camp, there’s a vast surrounding area to explore and walk around in with practically nothing in it. Chests with small amounts of money show up every now and then, but there’s a lot of wasted space that feels like it could have been used for something more. That’s not to say there isn’t anything of value to discover in the camp area, but I couldn’t ignore how empty and lifeless the whole area felt. I’m sure future content is planned for the camp, especially with some of the stuff that’s lying around, but as it stands right now, it’s a disappointing hub area. 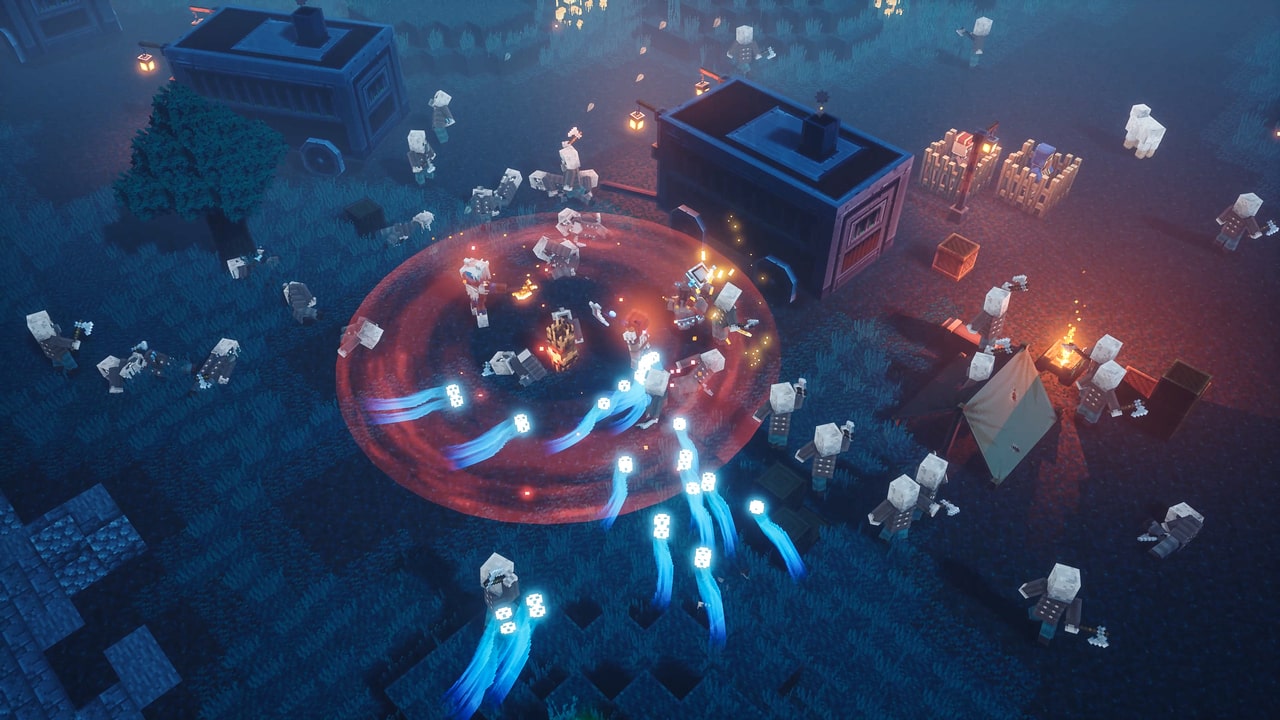 While it lasts, Minecraft Dungeons is a great time. The moment to moment action of mowing down mobs is addicting, and the abilities available to use are diverse and interesting. The game’s sole weakness, however, is that it’s sorely lacking in loot variety. It’s incredibly fun while you’re still getting new and exciting drops, but once that novelty wears off, Minecraft Dungeons becomes much less compelling. Thankfully, that point likely won’t come until sometime during your second or third playthrough, and by that point, you’ll have gotten your money’s worth out of Minecraft Dungeons. Don’t expect the game to last as long as something like Diablo or Path of Exile. If you go in with the right expectations though, you’ll be pleasantly surprised by Minecraft Dungeons. I’m very excited to play the upcoming DLC whenever it drops and I hope more Minecraft spinoffs are created in the future across a variety of genres.