The best sports game around continues to stay on top. 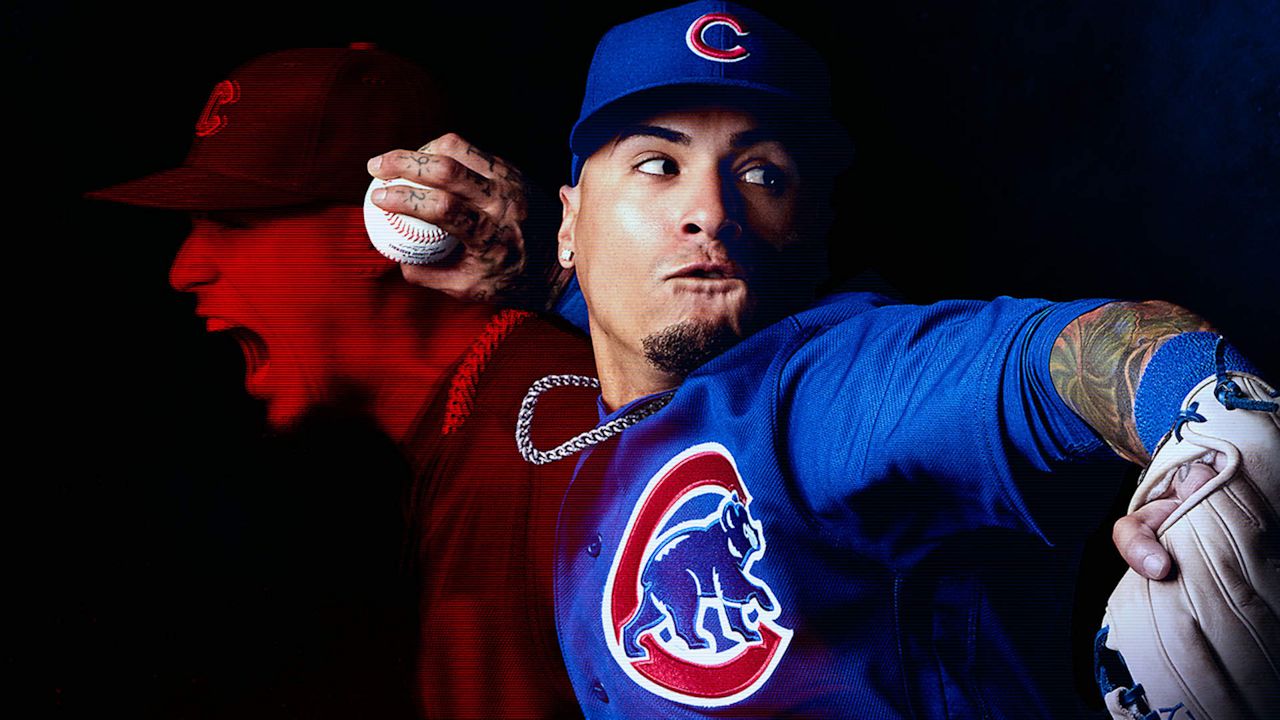 Major League Baseball has certainly had one of the most interesting offseasons we’ve ever seen behind the cheating scandals associated with the Houston Astros and Boston Red Sox, and now the start of the season is also being delayed due to other circumstances. Not only has MLB itself been such a hot topic of discussion over the last couple months, but it was also revealed not too long ago that the MLB The Show series will be going multiplatform after this year. This is a very important year for the series too, as annual sports games are usually at their best in the latter years of the respective console generations and MLB The Show 20 is yet another fantastic example of this.

Sports games are often at the top of their class when it comes to visuals due to the impact that realistic graphics can have on the overall experience. MLB The Show specifically has always been the cream of the crop in this department, with incredible levels of designs all across the board. The players and stadiums in MLB The Show 20 continue to amaze with their photorealism that you come to expect from the series, though it is at the point of the generation where there is minimal improvement over the last year’s iteration in that area. That is not a negative in anyway though, as the visuals still stand up when put side by side with a real MLB game to where they can be hard to tell apart at first glance. 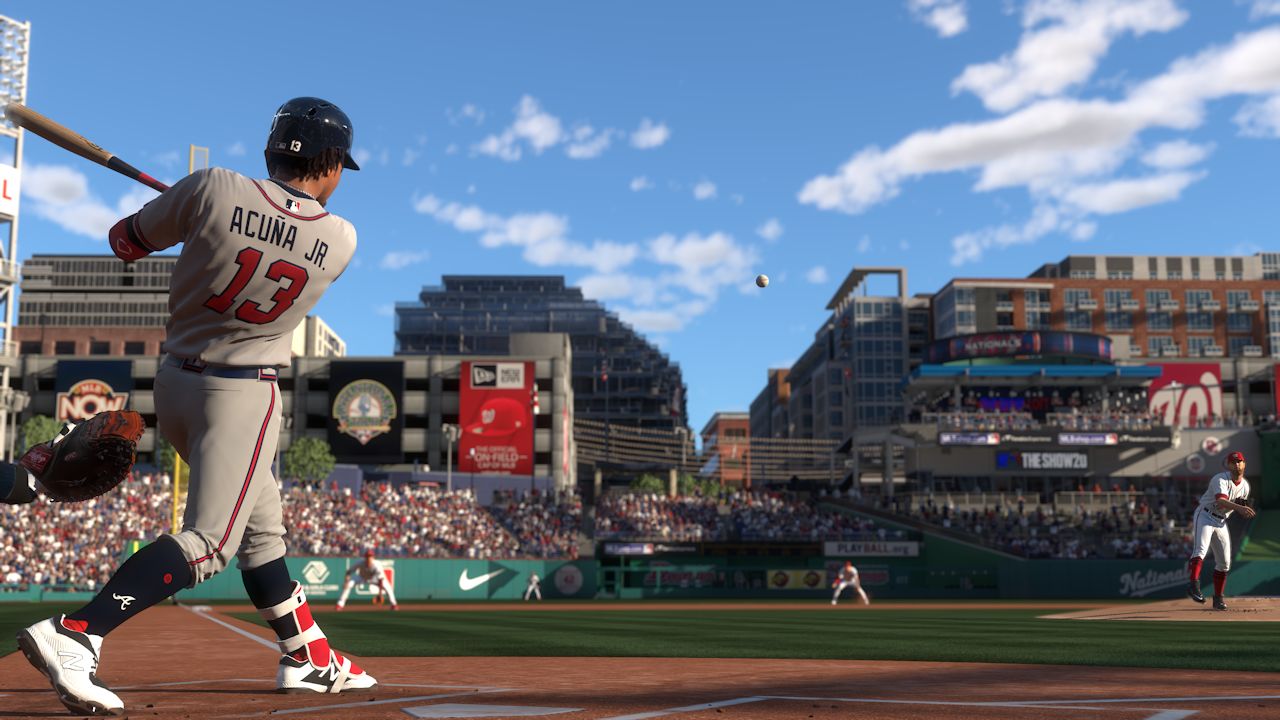 Similar to visuals, the gameplay year to year cannot vary all that much considering the sport it is based on. That did not stop SIE San Diego Studio from introducing a few new gameplay mechanics to MLB The Show 20 though, with some tweaks found here and there. The first of these is the new Perfect hitting tier that requires you to be even more precise than ever. The other side of the ball received the majority of the love this year though, with better reactions in the outfield based on the player and more intuitive defensive throwing mechanics all around the field.

Not only has MLB The Show offered players the opportunity to play as all 30 MLB teams over the years, they have also offered the full lineup of minor league affiliates at the AA and AAA level. However, these teams in the past have been made up of players with fake names due to licensing. The game did offer the ability to edit rosters and share them online, but now MLB The Show 20 has finally introduced fully named true to life MiLB rosters across AA and AAA. Even if you’re never touching the minor league affiliates to play an actual game, this means any major stars that end up getting the call up to the majors will already be in the game. Even these player models are at least somewhat designed based on the actual players, so you can finally play as Tim Tebow officially in MLB The Show for the first time if you even want.

Road to the Show has long been one of the major selling points for the series and last year saw the addition of a personality and perks system that gave you new goals to strive for to help yourself on the field. MLB The Show 20 takes this a step further by introducing challenges that will pop up throughout your Road to the Show experience that allow you to choose what personality perks you want to try and work towards in that moment and then be able to execute it in that game. This makes each of the games feel even more rewarding once the challenges start to pop up, as they are working towards a greater goal to improve your player in different categories. 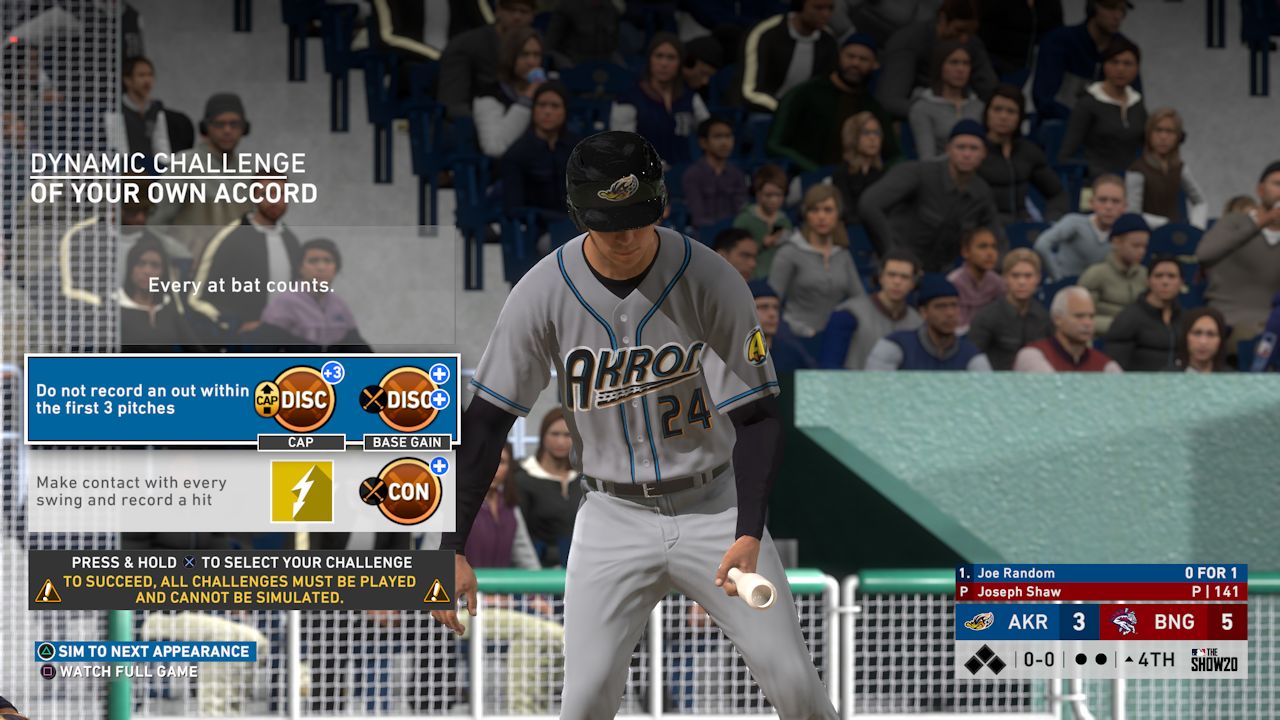 The biggest new feature from last year’s game was the new March to October mode that was an alternative to the full season Franchise Mode that highlighted key moments along the way during the season for your selected team. March to October returns yet again, this time with even more high leverage situations for you to play throughout the season. The structure of this mode is quite similar to its debut, but now there is a more robust rewards system for you to work towards with a Dynamic Difficulty option. On top of that, there are player call ups from the minors and easier trade options within the season that have helped to make the mode flow better as a whole.

Every sports game seems to have some sort of player collecting game mode that is the biggest wild card thanks to the variety of players you will have on your own created teams. While the base Diamond Dynasty typically remains pretty standard year to year, new game modes within Diamond Dynasty like Battle Royale and Conquest have been gradually added and this year brought the brand new Showdown mode.

Rather than a team you’ll build up and keep coming back to through the year, Showdown is designed to be a bit more of a pick up and play experience. There are multiple available individual Showdowns within this mode that you can select from, with there being an entry fee in the form of the in-game currency Stubs. To start off, you get to draft part of a team through 10 rounds, with some of the rounds providing you with perks instead of actual players. 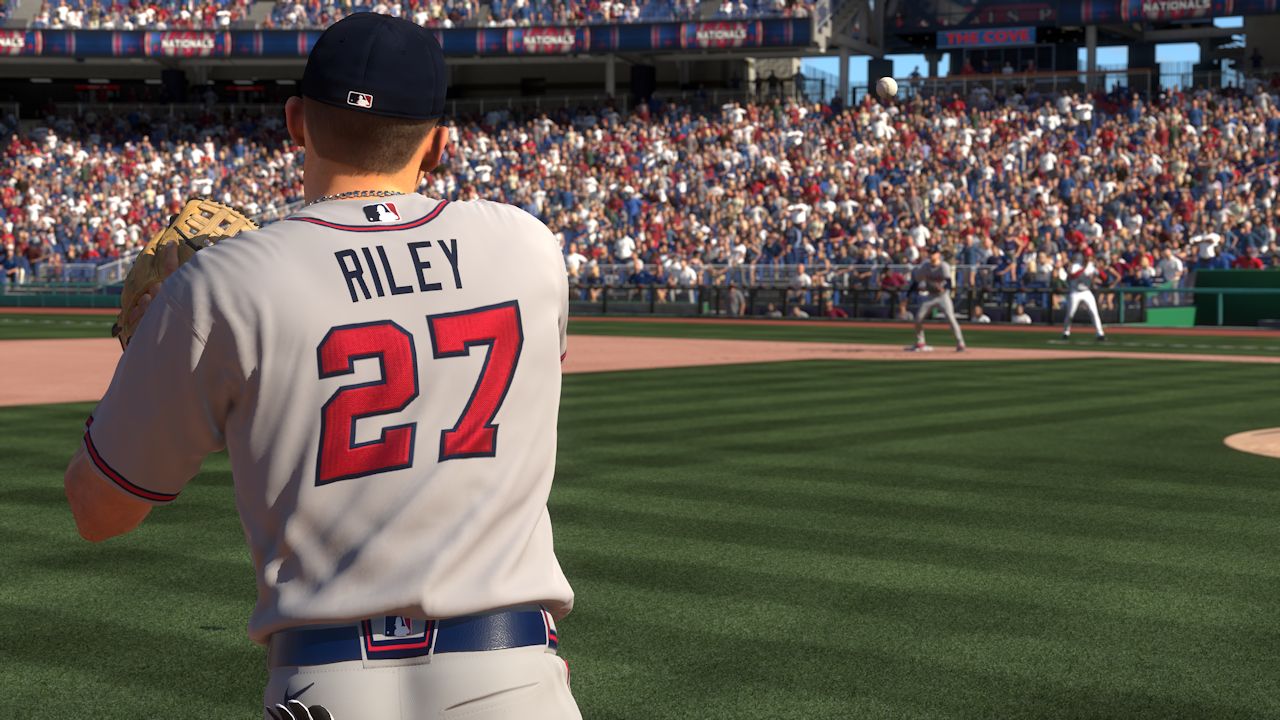 After the first 10 rounds, you then get to take on challenges that can reward you with additional draft rounds and are split between Blue and Red. The Blue challenges are pretty simple, such as tasking you with getting on base in a certain situation. Red challenges are known as Elimination Challenges where you must perform a certain task against a top tier pitcher before recording a certain number of outs. Unlike the Blue ones that let you continue on if you fail, the Red Elimination Challenges kick you out of the Showdown if you fail. These Red challenges essentially serve as little mini-bosses, which can get pretty tense at times.

The eventual goal in Showdown mode is to take on the Final Showdown against the specific pitcher for that entry. You will have 20 outs to win, with the completion of challenges helping you add runs to the board and bolstering your team before facing off against them. You can even try to take on this challenge from the second you draft your initial team if you want, but it definitely helps to build up your team before trying to face them. The fact that the Final Showdown is only related to hitting makes drafting top tier pitchers seem pretty useless over the better hitters, but they can be very important for the other challenges along the way. If you manage to succeed in taking down the boss here, you will be rewarded with some very useful items for other areas of Diamond Dynasty.

Diamond Dynasty has been the only hub for team customization in recent years, but MLB The Show 20 finally brings the customization suite over to Franchise Mode as well. This brings so many more possibilities for the full season mode that fans love to play, especially with the ability to create your own teams. In addition, you can also choose to relocate existing franchises and completely change up the entire landscape of the league. 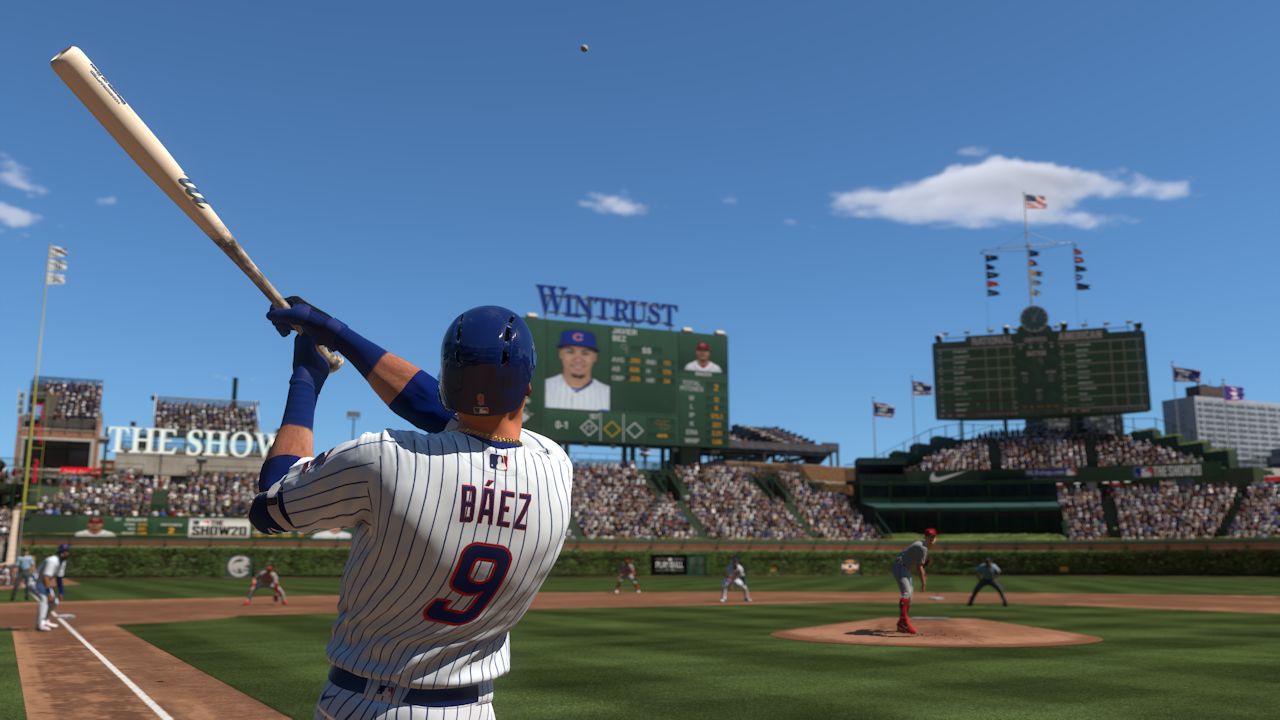 Online play is always very important when it comes to sports games and MLB The Show has been a bit hit and miss over the years. While the servers issues of the past haven’t been a major problem in a few years, fans have been asking for more customization with online leagues. SIE San Diego Studio has now finally answered those requests with MLB The Show 20’s addition of Custom Leagues online. These Custom Leagues let you select how many players are in the league, how many teams make the postseason, and even what type of season your league will have in general. Without question, this is the deepest online that the series has had thanks to the Custom Leagues.

The delay to the start of the upcoming MLB season will certainly have fans looking for something to scratch that itch while they await their favorite team to take the field for the first time this season and MLB The Show 20 is out just in time to help. Even though there are few drastic changes that set it apart from last year’s game, MLB The Show 20 is still definitely among the best that the franchise has to offer thanks to the addition of actual minor league players, the new Showdown mode, and Custom Leagues. combined with what was already a stellar foundation that SIE San Diego Studio has been building up for years now.

Late generation sports releases are usually at the top of their game when nearing the end of the current console generation and MLB The Show 20 continues that trend with a walk off home run in the final PlayStation only entry in the series.