Sometimes competition is a good thing. It’s unfortunate that gamers who like a certain type of game have to settle for marginal improvements year after year.  Like EA and Madden has with their long-running football series, Milestone has a stranglehold on the motorcycle racing genre.  This is especially true if you’re looking for the licensed MotoGP product.  There are some other competitors out there from time to time, but motorcyle racing purists are likely going to continue to gravitate towards the MotoGP series.  In recent years, it’s been baby steps for MotoGP.  Graphics have gotten somewhat better between the previous console cycle and this one.  Obviously the higher frame rates and improved graphical fidelity help when looking at the game in a five year window, but looking at what this game looked and played like last in 2021 and looking at the new game and you’re going to have a hard time telling them apart.

However, MotoGP has come a long way over it’s history.  This is a series that been kicking for over 20 years.  It’s kinda like NBA 2K or Madden in some regards.  Largely in that it’s always been at the head of the class regardless of whether the changes that were being made were noticeable from year to year.  The progress is being made, sure, but if you’re playing this game year to year, the changes here aren’t going to be much, but there’s one hugely cool addition that might make it worth the admission price. 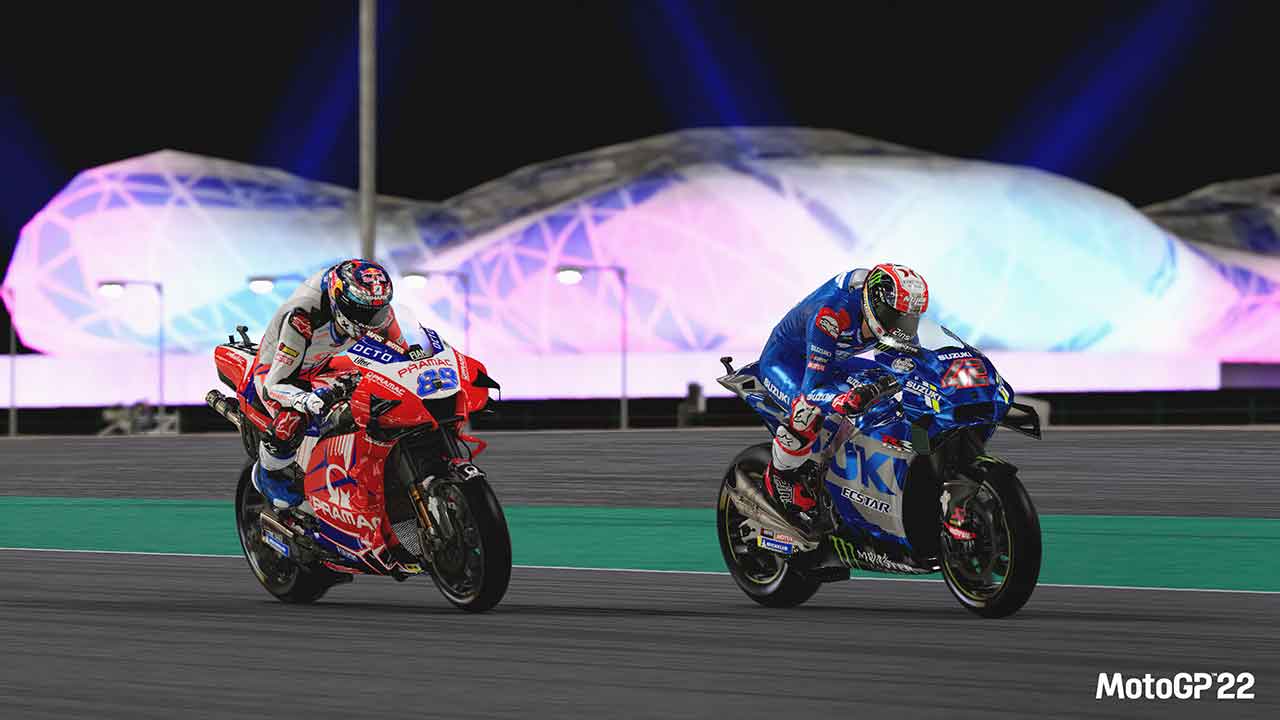 MotoGP 2022 has a ton of real-life riders, awesomely detailed real-world tracks, and a ton of features that you can sink your teeth into.  Across the numerous ways to play, I would say the most enticing is the new NINE Season 2009.  Which is basically a historical series of challenges in a pivotal year for MotoGP where the riders were in an up and down battle across the season.  The drama is heightened in the presentation of this mode, with a documentary to fill in all of the details something along the lines of what you’d get from a 30 for 30 on ESPN.  This mode is like a situational challenge mode, pass this rider, and finish a certain place.  Hold the lead.  Make a comeback.  You know the drill if you’ve played any recent sports game, they almost all have this nowadays.  It takes you across the full swathe of tracks and you’ll see some interesting scenarios along the way.  This is basically that hugely cool addition that was referenced earlier.  It’s definitely entertaining with the dual angle of informing and letting you play things out.

Aside from that though, in terms of the other modes on hand, it’s going to be pretty similar to last year’s offering.  What’s worse is that there really doesn’t look like there’s been all that much put into things like the user interface, character models or many facets of the game for that matter.  I guess if it ain’t broke don’t fix it, but at the same time the career mode looks like a carbon copy of MotoGP 2021.  There might be subtle changes, but to the untrained eye a lot of stuff has been reused this year. 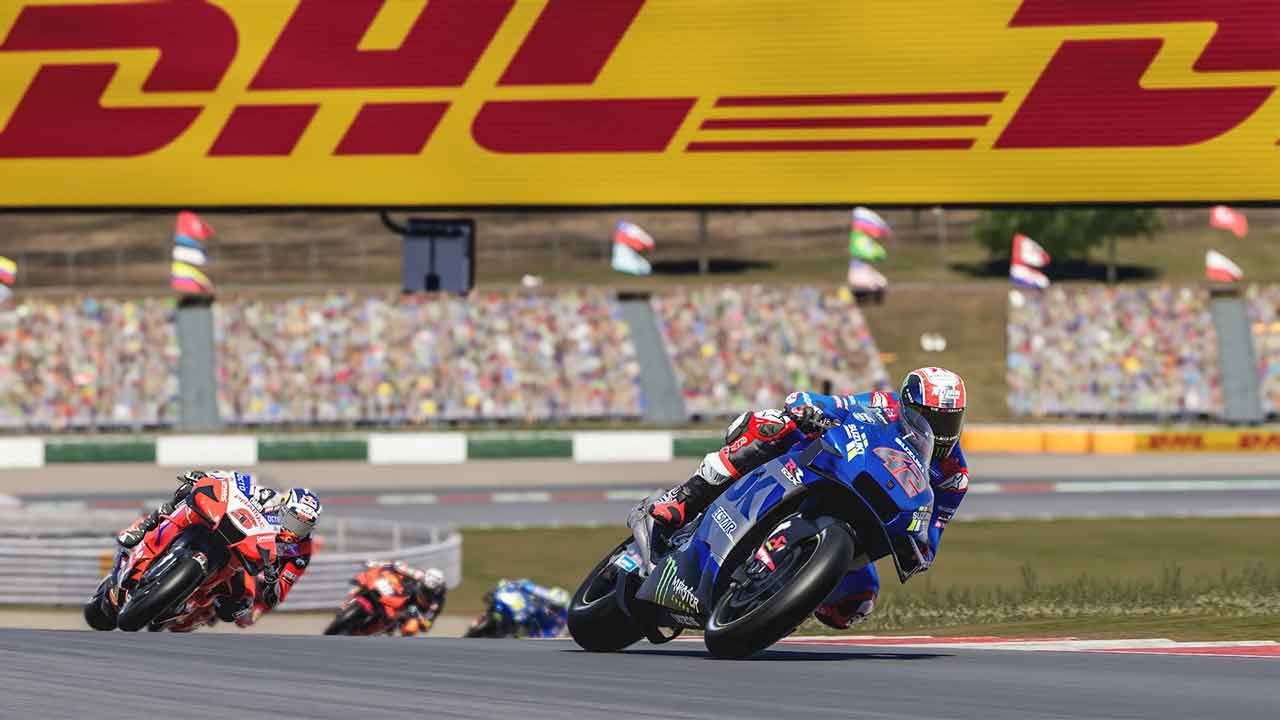 On the track, MotoGP 2022 is a lot of fun to play.  This series has always captured the sensation of speed very well in these games and that once again holds true in 2022.  While the controls aren’t all that unfamiliar from previous iterations, if you haven’t played one of these in a while, the riding does have an awesome feel to it.  If you like racing games, but have always stuck to four wheels, MotoGP 2022 will have you on your toes with great physics.  This type of racing is very rhythmic and it’s perfect for video games.  Leaning in and out of corners and pushing the bike to the limit is just awesome.  The riding in Moto GP is great on the track and that’s all highlighted by the fact that these world famous tracks look so very good this year as well.  With a myriad of conditions to ride in, and picture perfect replicas of the real thing.. MotoGP 2022 certainly delivers yet again when it comes to the sights, sounds, and gameplay.

Aside from the Nine Season 2009 mode, the developer touts some pretty obscure back of the box features for 2022.  This includes enhanced tutorials and an adaptive difficulty system.  I suppose if you’re hopping into MotoGP for the first time, there is a bit of a learning curve.  However, MotoGP is very much part arcade and part sim, like many racing games these days.  That adaptive difficulty will come into play though, because it’ll allow you to actually enjoy the game as you’re coming to terms with the fact that there’s a little more finesse involved in racing bikes that in other racing titles.  One of the other things that said was said to be improved was in the level of realism.  While that might be true on the road, the in-between is still a little bit last-gen looking.  When dealing with pit and other pre-race priorities, the character models don’t look they’ve been improved all that much at all.

That said, the NINE 2009 does have a way of setting it’s hook in you.  If it does, it opens you up to playing through the managerial mode, which is basically a full fledged simulator of the 2022 season.  This aspect of the game has so much licensed content with real world riders, the official circuits, plus historical riders no longer on MotoGP.  For those that do want a full deep experience you can also sink into the Managerial Career which had been introduced in previous versions, and like we said it’s a bit more of the same.  But this mode allows you to control many different aspects of the racing career from strategy to training, allocating resources and more.  Of course, there are some quick mode style games as well or you can head online to face opponents if that’s your bag.  We didn’t get a chance to check this aspect of the game out prior to this review.  That said, there are some things that have been added that might be of value to some folks out there.  Like the addition of 2-player local co-op and cross-play on consoles of the same brand.

Though again, it’s kinda the same situation that you find yourself in with games that have a stranglehold on their genre.  A new one of these has to come out each year, so the changes are going to be fairly minimal most years and in some years bigger.  This is one of those lateral years for MotoGP.

All in all, MotoGP 2022 is a bit more of the same, impressive as it may be.  This year’s inclusions don’t do much to overhaul anything in particular, but that new Season 2009 Nine challenge mode is a blast to play and incredibly informative if you like sports drama.  MotoGP 2022 isn’t perfect, but it’s about as good as it gets when it comes to the genre.