A violent journey led by a sentient banana. 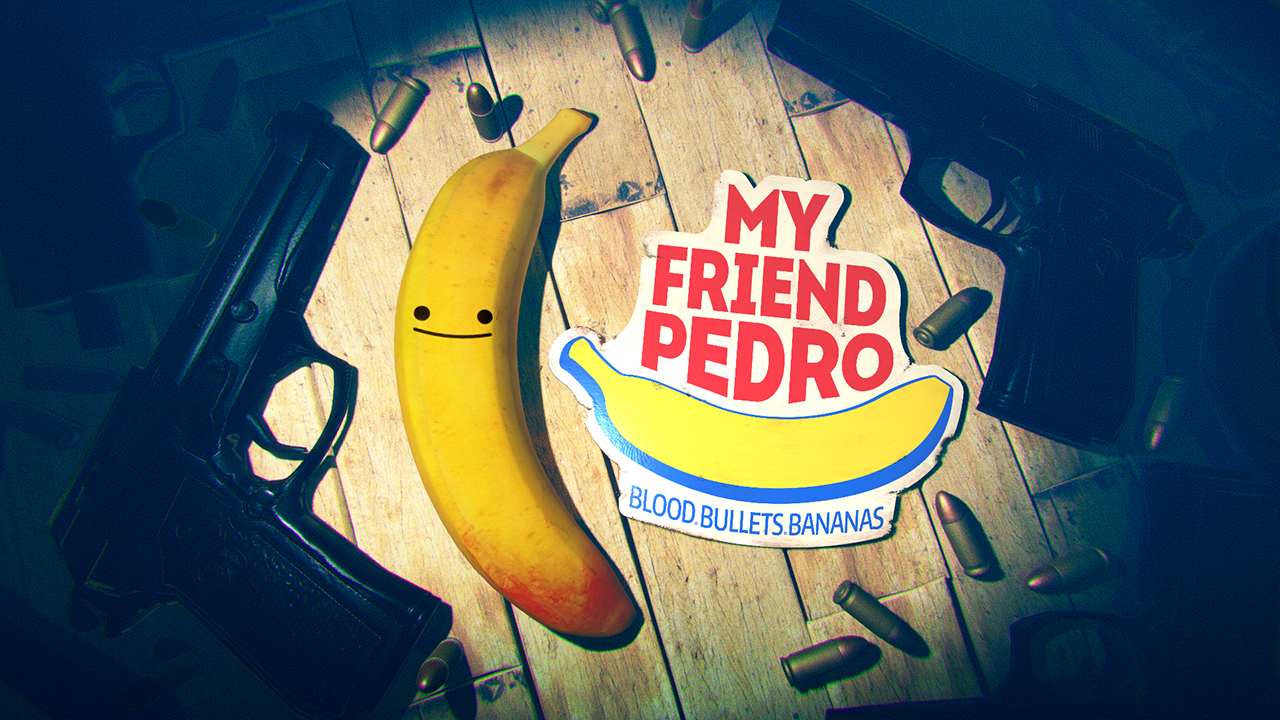 There have been plenty of games that have utilized the bullet-time mechanic over the years.  A mechanic that was introduced way back with the original Max Payne has stuck around and found it’s way into some of the biggest franchises, like Red Dead Redemption and others.  It’s done so, because it’s incredibly fun to shoot things in slow motion.  It’s the ultimate power fantasy.  My Friend Pedro is a 2D action game that is all about killing in style and using this bullet-time mechanic to slice through the enemies in front of you.

There isn’t much set-up for the story in My Friend Pedro.  You awaken in basement with a floating banana (Pedro) talking to you for a brief spell before you’re set loose on a gang of criminals with your pistol.  Those criminals explore the 2D space while you utilize this bullet time mechanic and any other weapons or environmental objects to take them out.  A thumping soundtrack sets the tone as you push through the relatively short obstacle courses that have you jumping, rolling, and shooting your way to an exit.  Each level plays out like a set-piece where you must use what’s available to you to find your way out. 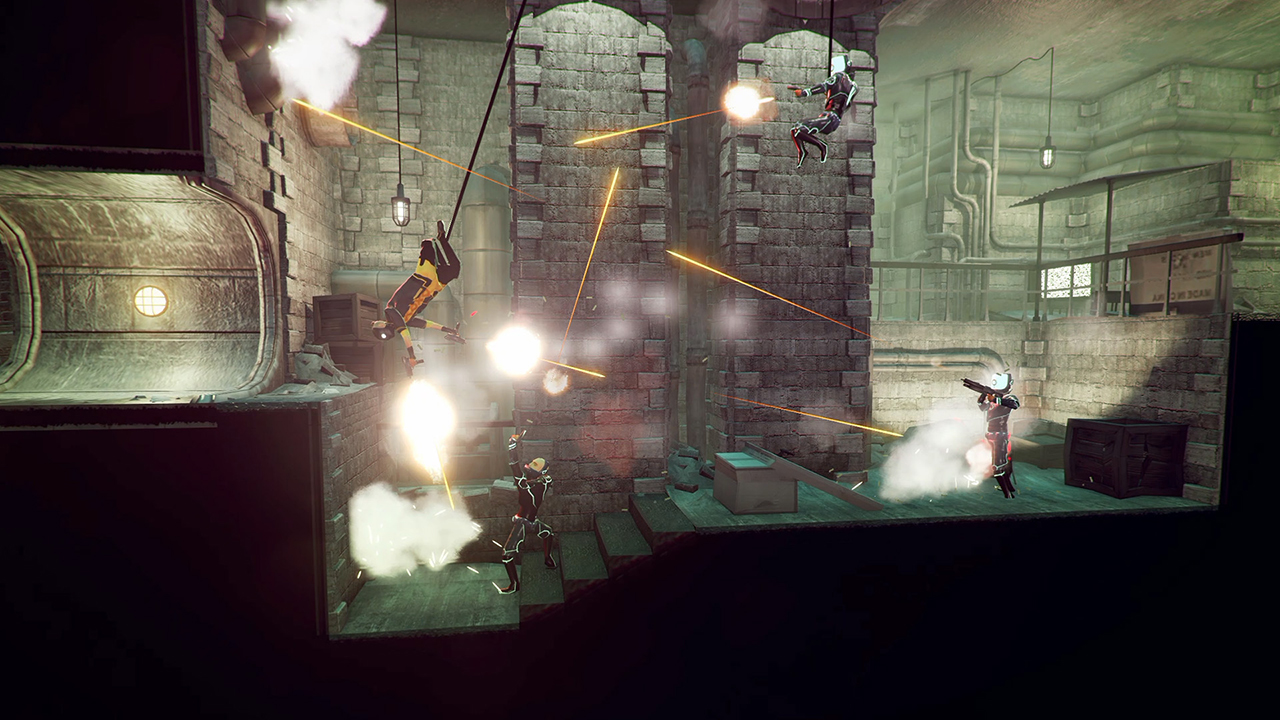 In each of these levels you’ll find enemies, of course, as well as some light puzzles which involve a variety of puzzle mechanics like jumping, shooting levers, and using ricochet to reach things you wouldn’t normally be able to.  The shooting and combat is what’s the most enjoyable thing here.  There are a variety of weapons that you can find in your time with My Friend Pedro.  There are pistols and SMGs which can both be dual wielded.  There’s a brutal pump action shotgun, a machine gun, and even a sniper rifle as well — each can be equipped on the fly as you navigate a level (assuming you’ve found them).  In each level there are different mechanics to use.  There are ropes to swing from, tables to turn over, zip lines, barrels, skateboards and other items that can be used during the combat sequences.  Anything you have it your disposal you can use to make it through each level.

The combat is My Friend Pedro is fast and brutal, requiring that you think on your feet to utilize the environment, the powerful bullet-time mechanic, and a dodge move to survive.  Levels play out like a ballet of destruction, where your character is spinning and weaving past enemy attacks to take them out.  There are only these handful of mechanics that you can use, but getting through a level can feel like a beautifully choreographed achievement.  The game rewards you for how well you do, doling out C, B, A, and S Ranks depending on your skill and ability to keep combos strung together.  If there is anything that My Friend Pedro lacks, it is NOT stylish combat that is fun to play.  While it may come in on the short side, your first, second, or third rip through a level is a lot fun.  If just for the variables and ways that you can attack it. 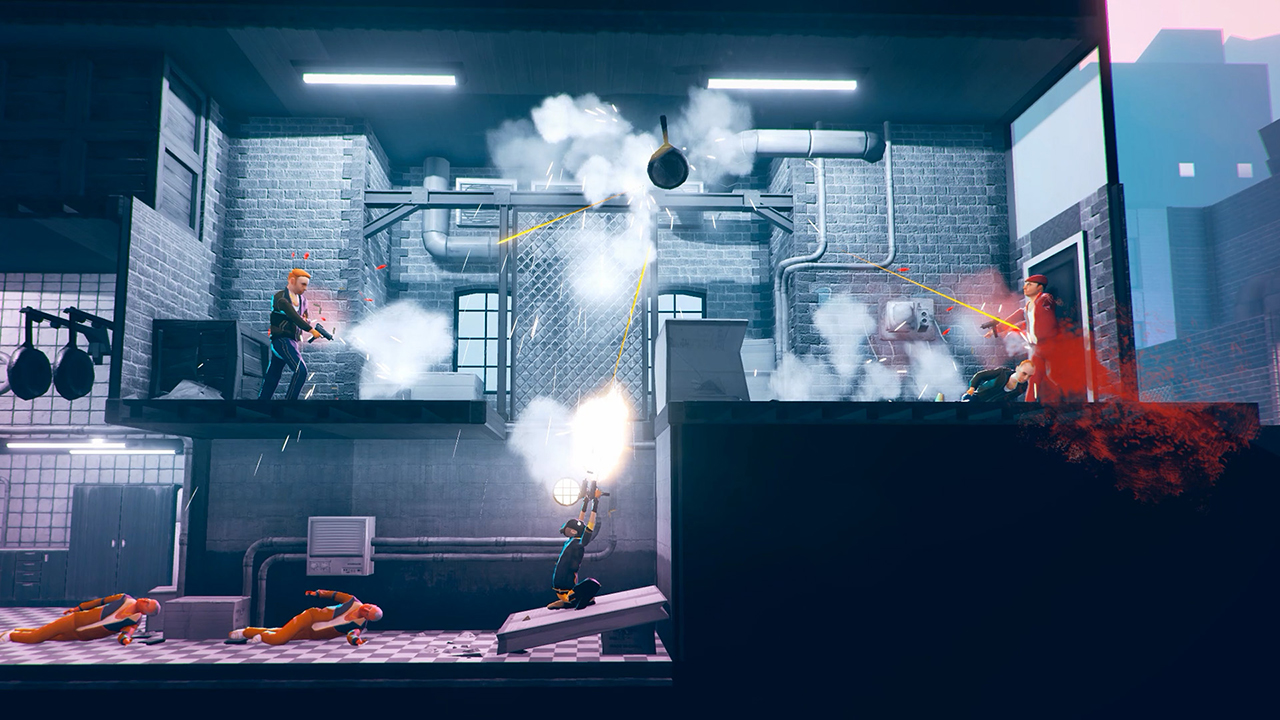 My Friend Pedro is certainly inspired by modern action movies, like a John Wick, for example.  And it absolutely nails the feeling of the one man unstoppable army in its core level design and combat.  The bookends for the levels are usually some deviation of this core mechanic.  These segments break up the standard fare, and have you doing things racing through the streets in a motorcycle, fighting enemies while flying through the air, and other death defying scenarios.  My Friend Pedro keeps up a nice pace out of the gate and doesn’t let off the throttle until the very end.

The action is pretty much non-stop in My Friend Pedro.  It doesn’t get too hung up on story throughout this time, and because of that the ending does fall a little bit flat.  While we’re not going to get into spoiler territory here, there’s a fairly telegraphed narrative here that never really hooks you the same way that the gameplay does.  It’s also a pretty short game.  You can bang through My Friend Pedro in four or five hours and have a lot of fun doing so.  There are multiple difficulty levels to tackle, online leaderboards, and the aforementioned ranks to achieve, but I never really felt compelled to push through the entire game multiple times.  I did try the different difficulty modes and they certainly make the game more difficult.  While on the default setting the game can be pretty easy with the ability to slow time and dodge anytime that you are in danger of dying, the higher ones are much more punishing for making mistakes.  Mistakes will be made, regardless of which difficulty level you choose, and there’s also a pretty forgiving checkpointing system that seems to start you pretty close to the last enemies that you’ve killed, which makes getting through the game even faster. 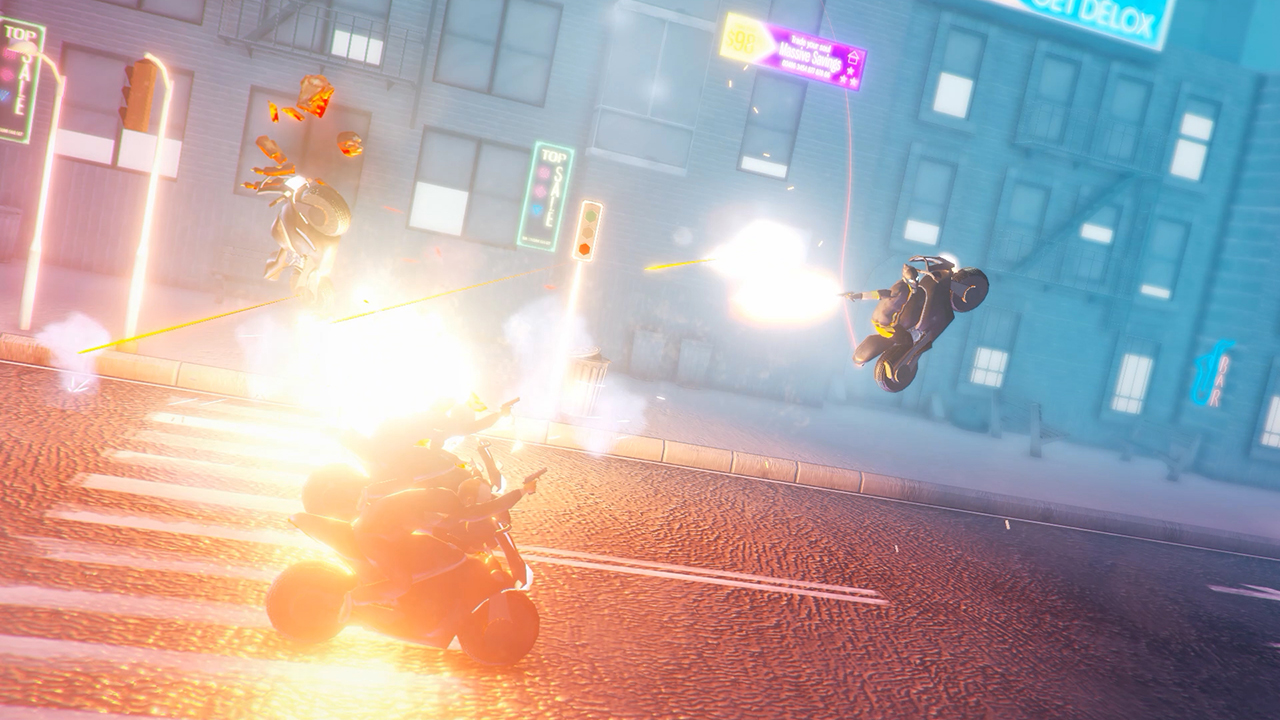 My Friend Pedro is ultimately an enjoyable time that feels like its over a little too quickly.  It’s one of those situations where the fun feels like its just getting started as you’ve come to grips with all of the available tools of destruction and then the credits roll.  With little story it’s a matter of whether you’ll like the combat or not.  I liked it, immensely.  But eventhough I did, I still didn’t really feel the pull to do it all again.  Perhaps there will be more added to the game that can expand on this.  A level creator or deeper challenge or progression system could do that, but what’s here at launch is just a good old fashioned video game… and there’s nothing wrong with that.

On the Nintendo Switch version of the game that I played, My Friend Pedro did NOT perform flawlessly.  This can be an incredibly chaotic game with bullets, explosions and enemies for the game to render.  While this was not the case for the entirety of the game, there is a sequence towards the end that throws more enemies than usual at you, and at this time it feels like the console just couldn’t handle it.  Whether in docked or handheld mode, this section of the game just saw a massive dip in framerate.  This caused a number of unnecessary deaths and retries of this section.  Certainly not a deal breaker for a single spot to have some technical issues, but being so close to the end of the game it did leave somewhat of a bad taste.

My Friend Pedro is a hyper-violent ballet that you control.  DeadToast Entertainment takes players on an incredibly fun ride with the game’s enjoyable combat system.  All good things come to an end though, and this one just ends a little too soon.