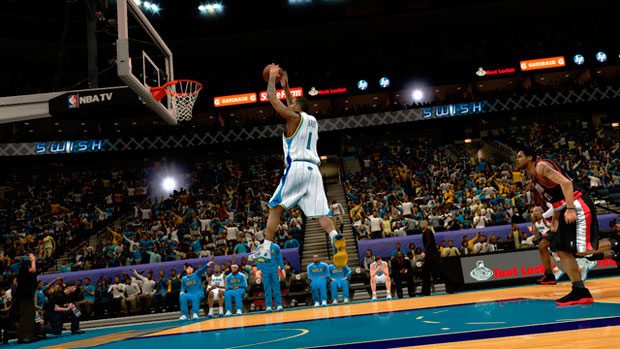 There’s an NBA lockout looming this Fall, with NBA owners and players on the verge of stalemate, so NBA fans could be without basketball this season.  Well not entirely, because NBA2k12 could fill that void with one of the best basketball simulators that has ever graced a console.

We’ve seen a general trend in the world of sports video games.  One which is propelling the genre into uncharted territory of realism, that fans have been hoping for as long as I can remember.  These strides have been noticeable in EA’s FIFA and NHL franchises, but if you think that 2K would let them supercede them in the world of winter sports, you are in for a rude awakening in NBA 2k12.  While the game isn’t an entirely new build, it feels awfully familiar to renditions of years past, with refinements and new features that secure its status as one of the premiere sports game franchises in the industry.

The NBA 2K franchise doesn’t have any competition, and they haven’t for quite some time.  It would be easy for the Visual Concepts to rest on their laurels and push out a yearly update, but this development team is clearly striving for big things with their latest.  The 2K franchise has slowly marched from arcade style play to simulation over the past five years or so, and as it has, the game has gotten awfully close to what you would find on any given night on TNT.  Gone are the days of racing down court for uncontested dunks, and in their place, a wide world of nuanced gameplay, smarter AI (not harder), and a generally more realistic feel to the action on the court.  Since basketball is game full of free flowing action in real life, it’s been a tough task to realize that in the virtual world.  You’ve seen many attempts over the years from Visual Concepts, but many of the titles have become bogged down with animations, hitting the tone perfectly in some areas, while others have felt a bit awkward.  2K12 seems to have addressed some of these issues, which makes for a well rounded game, giving users the ability to create open shots both from afar, and more importantly, in the post.  Over 1000 animations have been added into the mix to give the game a much more natural feel in general.

Outside of the gameplay, the game once again looks fantastic.  The finer details from a spectators perspective have all been nailed to a tee.  Rivaling a televised broadcast, with its svelte presentation and believeable commentators.  While it’s pretty standard fare for sports games today, none are doing it better than NBA 2k when it’s time to compare apples to apples.  Carrying into this presentation tour-de-force is the new legends mode.  2K takes players on a trip down memory lane, revisiting players of yesteryear, featuring great games and great teams from the NBA’s past.  You’ll be tasked with playing as some of the NBA’s greatest.  Jordan, Bird, Magic, and a who’s who of NBA Elite headline the event.  With multiple unlockable teams earned for each victory, and fifteen player challenges in all, there are plenty of teams to unlock.  Depending on the era, the game is presented as it was when it was played.  You’ll visit old historic arenas, and even a day before color TV was the norm.  Short shorts, Afros, and striped socks galore, you’ll see what the NBA was before baggy shorts and arm sleeves.

One of the most notable revamps, is the My Player mode. Much of the fat has been trimmed in the mode, making it a much more streamlined and black and white affair to make it to the pros.  Once you do, you’ll be back to playing fundamentally sound basketball to level up your character.  Boxing out, setting screens, doing all these small things will net you points that go towards a performance rating, and eventual upgrades for your player.  Couple that with the presentation in game, and you have got a serious time waster on your hands.  With the overall goal to make it to the hall of fame, if you take on that endeavor you could be in over your head until next October.

Some online issues persist. Freezing, Glitching, and Lag were prevalent in my experience.

Of my annual gripes another one has returned, and I still can’t figure out why this hasn’t been addressed by now.  Teaming up and relying on matchmaking to do so is still resulting in crashes, freezes, and other online functionality problems.  There must be something deep seeded in the online code for the game to have this be a problem for so many years.  After attempting 20 plays of Team Up, and witnessing 19 crashes and one laggy success, I can’t say I recommend wasting time even attempting to play the mode.  But with so much else to do in NBA 2K12, why waste time on the bad?  The streamlined user interface will keep you up to speed on all the goings on in you 2k12 career.  Be it in the Online Association Mode, Legends Progress, NBA Today, or My Player Activities, it’s all at your fingertips each time you fire up the game.

NBA 2K11 was one of the best editions of the franchise that Visual Concepts has ever put out.  2K12 one ups themselves yet again, in their yearly hardwood classic.  The incorporation of the Legends Mode is just the tip of iceberg when it comes to new and engaging content in NBA 2K12, the only question is, where do you start.  If you end up jonesing for basketball this year because of a lock-out, you’ll have your antidote in NBA 2K12.