The latest news in the world of video games at Attack of the Fanboy
August 11th, 2016 by William Schwartz 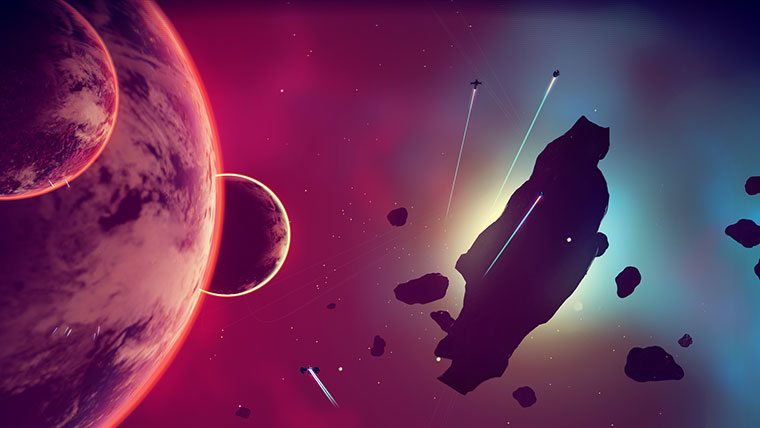 Ever since the reveal of No Man’s Sky, the coupling of a drip feed of information and a community hungry to learn more about the game have created an immense amount of hype for Hello Games’ latest.  Ambitious is the word that oft-described No Man’s Sky during its development phase, and it’s probably still the most appropriate word to describe the final product.  What’s been created with No Man’s Sky is more a techical feat than something that is actually “fun” to play.  To boil it down to its most basic, No Man’s Sky is a procedurally generated, survival game with crafting elements.  A rather repetitive survival game with crafting elements, actually.  One that asks you to repeat mundane tasks, over and over again, while galavanting across the massive procedurally generated universe. 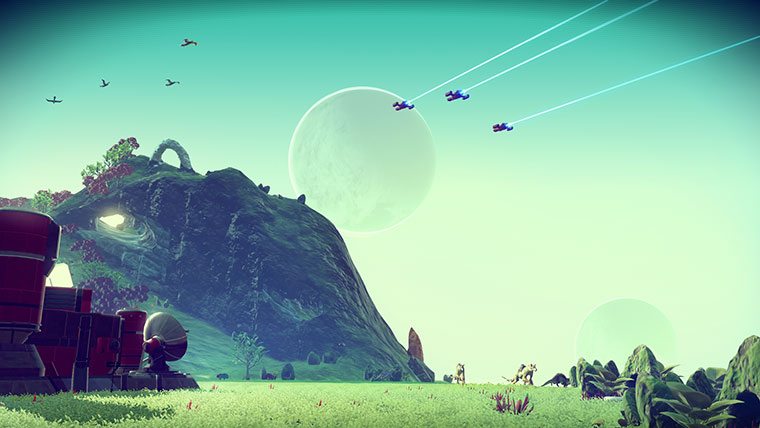 It’s a game that keeps you busy doing repetitive actions, with only the vaguest of goals far off in the distance.

I feel like the target audience for a game like No Man’s Sky, and even I got bored with it after a while.  It’s a leisurely exploration game.  It gives me the type of relaxation that I got from playing a game like Destiny 1.0 and doing its most mundane tasks.  It’s like walking around WoW as a tourist — completing objectives that have no meaning to you.  It’s a game that keeps you busy doing repetitive actions, with only the vaguest of goals far off in the distance.  It’s all so secondary to the now.  No Man’s Sky makes it clear that the overarching systems don’t matter as much as what your doing and seeing in the moment.

That said, the game’s biggest asset is in the procedural generation of new worlds.  So on one hand, there’s an endless number of places to visit and explore, on the other, you’ll be doing pretty much the same thing when you get there. That’s the real unfortunate thing with No Man’s Sky.  The procedural generation just doesn’t have enough variety to keep things interesting.  There are only so many times you can fly to a question mark and press a button to collect your points before you start getting bored with the whole process.  The hook is that you might see something cool, something interesting, something that no one else has seen before — that there might be a cool upgrade for your suit, weapons, or ship.  That’s the hook of the first 10 hours or so with the game, as it wears on it feels more like a facade.  30 hours in and the coolest thing I experienced was an agressive Ewok-looking character which had to be put down and turned into carbon.

The hook is that you might see something cool, which may or may not actually happen

Due to the procedural generation of the game, you’re not even guaranteed to see some of its cooler planets, climates, wildlife, or structures.  I haven’t seen anything that’s even close to the stuff that was shown off in trailers over the last few years — nothing that’s blown me away, nothing that’s made me so much as crack a smile.  While this all sounds pretty negative, I’ve certainly been impressed by the visuals of No Man’s Sky, the shear size of it, the music, and the laid back nature of the game.  No Man’s Sky has only a loose structure, which you can veer off of at any time.  There are three unique paths that you can follow that will have an impact on your game experience in the latter stages.  For some, that’s going to be a huge selling point.  The ability to have endless adventures and expeditions, as mundane as they may be.  The biggest excitement you’ll encounter in No Man’s Sky is when an agressive sentry force chooses to attack you, wildlife is agressive, or you land on a planet that is prone to violent storms.  There’s no adventure here, everything feels more clinical in No Man’s Sky, unmemorable. Even the things that feel like they were shoehorned into the game to make it more “exciting,” aren’t.  Pirates ships looking to rob you and space battles that you can join, just don’t hit the notes that they should to keep the game feeling varied and natural.  Instead they feel scripted. 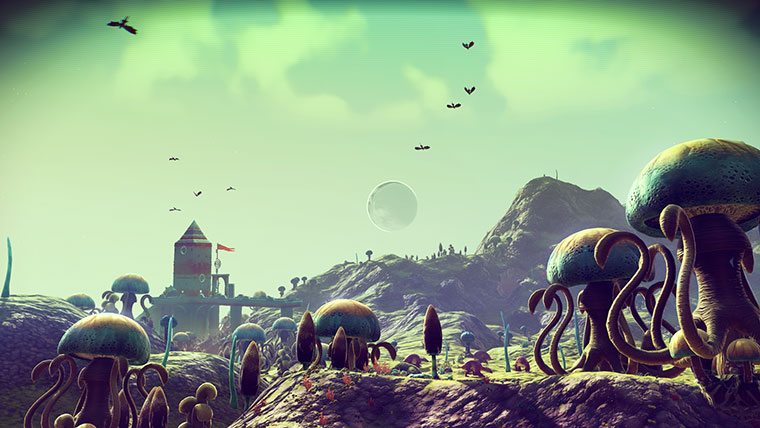 No Man’s Sky is a game for people that like managing inventories and upgrades, crafting materials, and doing busy work.

So No Man’s Sky isn’t a game for action junkies.  It’s a game for people that like managing inventories and upgrades, crafting materials, and doing busy work.  That sounds horrible, but there are those people out there.  I’m one of them.  I love No Man’s Sky for this.  It’s a game that I can play while doing other things, as I have no fear that I’ll be missing something important in listening to a podcast or chatting with friends.  And this game has a lot of systems to manage and farming to be done.  The primary thing you’ll be doing is managing your Exosuit, Starship, and Multi-tool.  These items all require that you fuel them, the resources that power them can be found on the planets you visit.  While walking around planets you can pull out your scanner and scan for different types of elements, common and uncommon.  Pushing further into the universe seems like the main objective in this game, regardless of which path you choose.  So the main crafting aspect of No Man’s Sky is crafting the materials needed to fuel a hyperdrive to get you from place to place.  This requires that you constantly have a steady stream of materials of different types to craft what are called Warp Cells.  Now, there are other things that can be crafted.  Upgrades for example, also play a large role in the progression for No Man’s Sky, and you’ll find upgrades for your Multi-tool, Ship, and Exosuit in many different nooks and crannies across the universe.  But the loop of crafting Warp Cells for progression cannot be denied as the main task to get you from planet to planet, and the thing that feels the most repetitive about the game.  For better or worse, you’re either going to love or hate this type of core gameplay.  It’s divisive — the size of the game isn’t mirrored by a wealth of things to do in it. 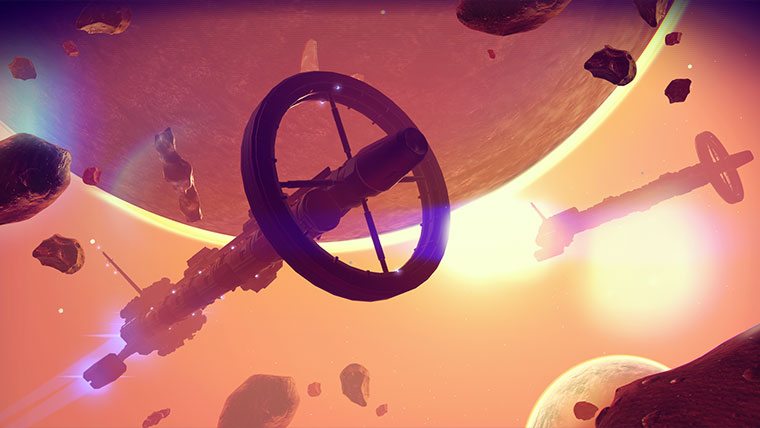 On the PlayStation 4 version that we played for review, we also had a myriad of problems with No Man’s Sky even after the day one patch.  I didn’t keep track of the number of times that the game crashed back to the PS4 UI and threw an error code, but it was quite a few.  The game has an autosave feature, but when these crashes occur it almost always lost a good chunk of progress.  So, say you just spent a half an hour doing an incredibly mundane task, and then the game crashes… you’re gonna have to do it again.  There were definitely some frustrating moments because of this. The path system in No Man’s Sky seemed bugged as well.  After playing 20+ hours on a single path, the inability to progress due to a lack of milestone progress made me have to abandon it completely. It seemed odd, and maybe it was just a bug.  Though I never could find my way back to the path of the Atlas after having to abandon it.  That said, for a game as massive as No Man’s Sky, the bugs and oddities were relatively little and didn’t hinder my enjoyment of the title in more than a few major incidents.

One of the most anticipated games of the year, No Man’s Sky is somewhat of a letdown.  While it certainly puts its best foot forward with a beautiful audio and visual presentation, to put it bluntly, it’s boring.  Ambitious as the universe that’s been created by Hello Games is, what lies within is a middling survival/crafting game.

This is No Man’s Sky