Ori and the Blind Forest Review 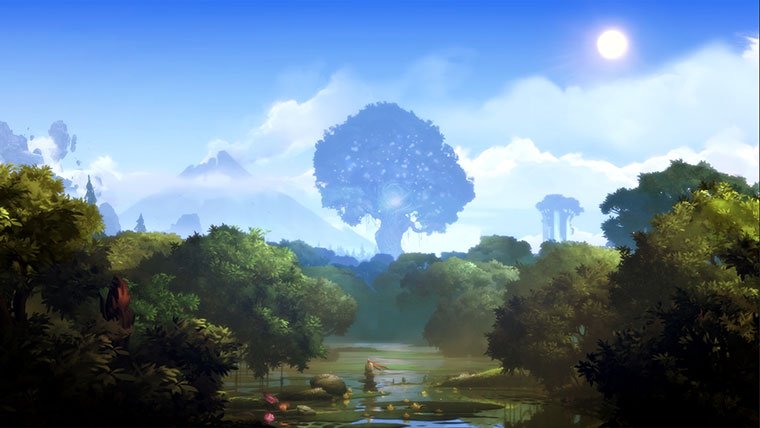 2D-Platformers are a dime a dozen these days, but only a select few get it right. Moon Studios, the team behind Ori and the Blind Forest for Xbox One and PC can be added to that distinguished list.  Teaming up with Microsoft, they’ve put together one of the most impressive platformers that’s come out in quite a while.  Ori and the Blind Forest is right up there with the very best games in the genre, combining a AAA presentation with an independent sense of innovation.

Ori and the Blind Forest is a coming of age story. The game’s main character orphaned at the onset of the game, Moon Studios sets a somber emotional tone. The forest of Nibel is dying, and Ori is thrust into the role of its savior.   He’ll track down three elements to restore Nibel to its previous glory, making friends and enemies along the way.  The gorgeous forest of Nibel will be Ori’s playground, and you can explore it as you wish, but this platformer is structured like other “Metroidvania” titles.  Ori and the Blind Forest fuses 2D-platforming with exploration, giving the game an action-adventure like feel that has RPG elements tied in as well. While Ori and the Blind Forest is hardly the first to copy this style of game, a unique use of skills and perks, and a different type of checkpointing system make Ori feel unlike other platformers.  Moon Studios also sets itself apart with an incredible hand-painted world and emotional orchestral score.

Moon Studios boasts that they reused next to nothing in developing the world of Ori and the Blind Forest, and it shows.  Each level has a distinct art style and has the detail that comes from handcrafting.  Dashes of color, fog, vegetation, sun rays, and mist, all adding to the beauty every step of the 10 hour campaign.  Unless you’re doing some backtracking, you’re not running into anything generic here.  Adding to the presentation immensely is that orchestral score.  Since Ori and the Blind Forest has no spoken dialog to further the story, a lot of its conveyance is done through the emotional highs and lows that are delivered through the sounds of the game.  The symphonic score hits those notes perfectly, adding tension, excitement, and wonder at the right times.

Ori and the Blind Forest is more than just a pretty face though.  The best 2D-platformers feature great controls, and Ori doesn’t disappoint here.  The core platforming features pinpoint accuracy and responsive controls that feel natural.  Progressing through Ori and the Blind Forest, you’ll need to deal with many different types of enemies, and tackle environmental traversal challenges, with each different area of the world mixing and matching these challenges, requiring you to utilize skills and abilities that you’ve unlocked. Unlocking said skills are done simply by exploring the world and discovering trees.  Finding these trees unlocks skills instantly, and while there are some familiar ones like Double Jump, Gliding, and Wall Running, which allow you to access new areas, there are also quite a few that feel entirely new.  Bash for instance allows you to chain jump off of enemies and their projectiles, sending you thrusting one way and the projectile or enemy heading the other.  Extremely helpful in opening up doors or ascending to new heights.  Ori and the Blind Forest gives you some time to get acquainted with your new skills in most instances, but completing the game will test your ability to put it all together — Solving puzzles, completing dexterity challenges, and conquering enemies.  Ori’s level design is varied, and Moon Studios gets creative in the ways that it tests you, keeping the game feeling fresh in each new puzzle or encounter. 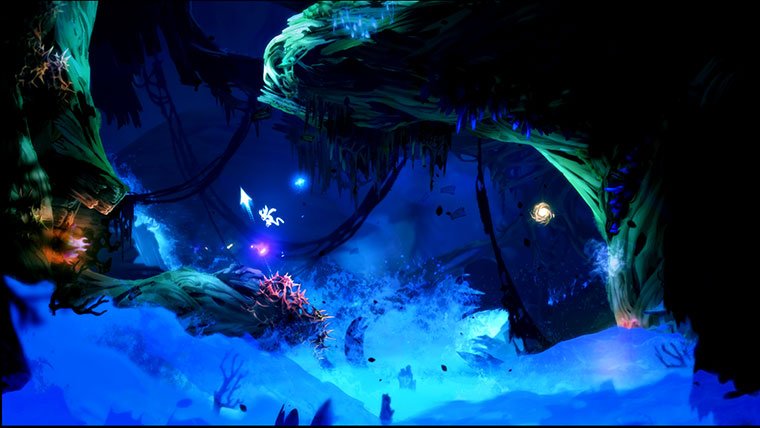 Ori and the Blind Forest can be somewhat challenging, especially when learning new skills, and in the late game as enemies are more powerful and platforming is more difficult. But there’s a hit and miss checkpointing system that puts saving your game entirely in your hands. Players must constantly monitor health and power for Ori.  The former should be self explanatory.  Don’t jump into spikes, thorns, or fire.  Don’t get hit by enemies, etc. The latter requires you to conserve power for saving your game, opening specially marked doors, or using skills that require said power. The system itself is pretty good, but it’s never really laid out in the early game just how much conservation you’re going to need to be doing.  Can you afford to checkpoint often?  The answer turns out to be yes, but it’s something that you learn over time.  These power orbs are everywhere, and they respawn in many cases, allowing to save just about anytime you need to.  The save system simply requires you been on solid ground and not in imminent danger.  You can avoid replaying many sections over and over if you’re careful, but it’ll take some remembering on your part to make sure you save.  There are a few sections of the game that won’t allow you to save, and Ori and the Blind Forest has a tendency to throw things at you unexpectedly. This makes for a game that’s filled with trial and error, and learning specific sections bit by bit.  This can break up some of the flow for the game, especially in high pressure scrolling scenarios where you don’t know what’s coming up next and have little time to react.

Ori and the Blind Forest is about 10 hours of gorgeous platforming goodness, but don’t expect anything after the credits roll. In fact, you can’t even go back into a game after you’ve beaten it.  There is literally nothing to do after you’ve finished it.  There are no alternative difficulties to try or new game plus, but there is an online leaderboard that tracks both completion percentage and time.  Actually, there isn’t much diversion in Ori and the Blind Forest at all.  Moon Studios has created a world that beckons to be explored, but there’s very little reason to do that exploring.  Following the game’s highlighted story progressing routes seems to earn you just about every skill you need to reach the ending.  There’s very little side story and there are no collectibles. Ori and the Blind Forest is a much different game than many on the market today.  Ori is short of filling or the trimming that you find in most AAA titles.  It’s easy to get a little confused by this lack of content that’s lumped into most full priced games, Ori and the Blind Forest has AAA production value but an indie price tag.

Ori and the Blind Forest rivals the very best games in terms of presentation and controls.  It offers a challenging path for you to follow on this touching emotional journey.  So good, so beautiful, you can’t help but want more reasons to play.

Ori and the Blind Forest Xbox One
"loved"

Ori and the Blind Forest