From the creators of Kirby. 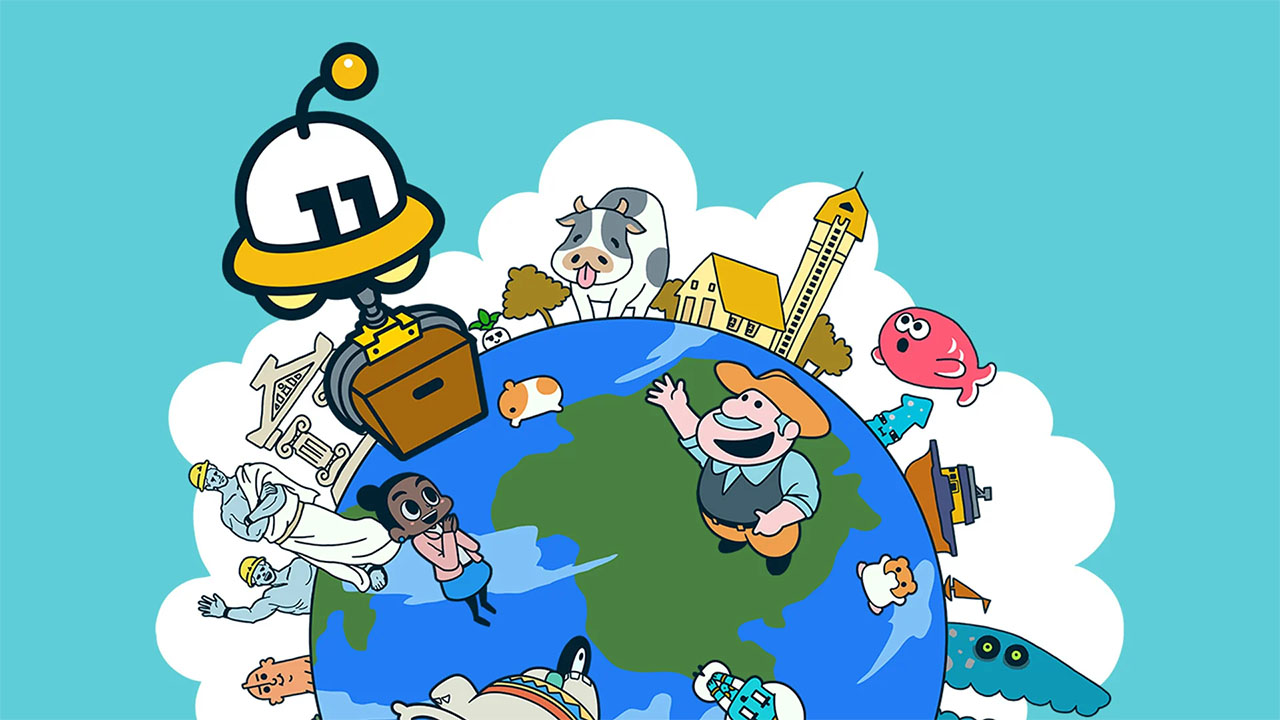 Developer HAL Laboratory has been around for 40 years now and has released games across many different platforms. While they have never been a subsidiary of Nintendo, they have had very close ties since Nintendo rescued them from bankruptcy early on and had later Nintendo president Satoru Iwata installed as president. This led to them creating the Kirby series for Nintendo, along with working on the Mother franchise and the earlier Super Smash Bros. titles. They are still developing games pretty regularly today, with them being mostly Nintendo exclusive for decades now. The only real platform outside of Nintendo they have tackled has been mobile, which saw the release of Part Time UFO in 2017 that has now arrived on the Nintendo Switch.

HAL Laboratory has sort of a signature art style that they have developed for the Kirby series and a lot of that is carried over into Part Time UFO. The UFO you control itself literally looks like it was lifted straight out of a Kirby game as some sort of transformation he would have had. This art style is fairly simplistic, yet it works quite well for this game with its use of colors. On top of that, the game also has a charming soundtrack that feels very fitting for the very light tone they are going with here.

Part Time UFO puts you in control of a little UFO that is just trying to get by in life and needs to find work to in turn make money. This is done through a series of odd jobs that are broken up into levels within a book that you can select from. Each page has three levels for you to complete, including locations like a Farm, Circus, Restaurant and more. These various location settings will reoccur with levels such as Farm 2 and even Farm 3 showing up later. This then culminates in somewhat different final levels that are actually a series of boss fights. 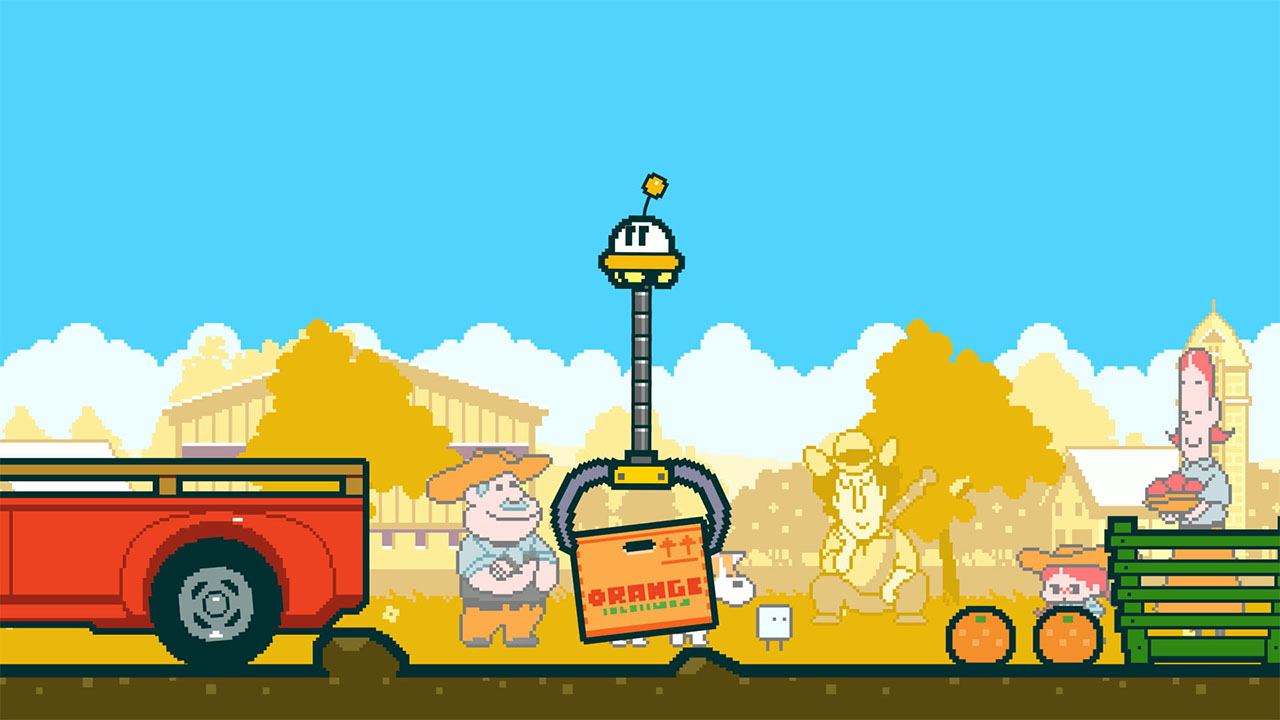 Each of the stages have three medals for you to earn that vary drastically from level to level. The only standard one across most stages is for beating the level before the timer runs out, but the other two will be dependent on that stage. These are shown by little icons that can often be hard to decipher, leaving you to have to figure it out with a little trial and error. In some ways, the game feels reminiscent a bit of the WarioWare franchise due to the randomness and zany situations you are placed in, though these stages usually have more tasks for you to complete and last longer as a result.

Within the various stages in the game, the goal is to at least beat the level. This is done by completing a certain main task in that level, which you will do by moving around your UFO. The UFO moves with the left analog stick and then you can press A to drop a crane arm like you’d find in a crane game. You can’t be directly above anything either, so give have to give some space between you and the object you are trying to grab. Like mentioned above, the stages will differ in the tasks you have to complete, but the basic gameplay of grabbing and moving objects with your crane arm is consistent throughout each of them.

The Tower of Infinity can also be a good challenge when you unlock it, as the sole purpose is to try and stack objects as high as you can without anything falling off. Objects will keep getting brought in via helicopter on either side of the screen, with you constantly adding to your pile. As soon as one tips over and falls off though, it is game over. This can be really difficult though just because of the odd shapes of the objects and the randomness of them appearing. The goals for this one are pretty insane too, so this is definitely one of the most challenging aspects of the game until you get to the post-game. 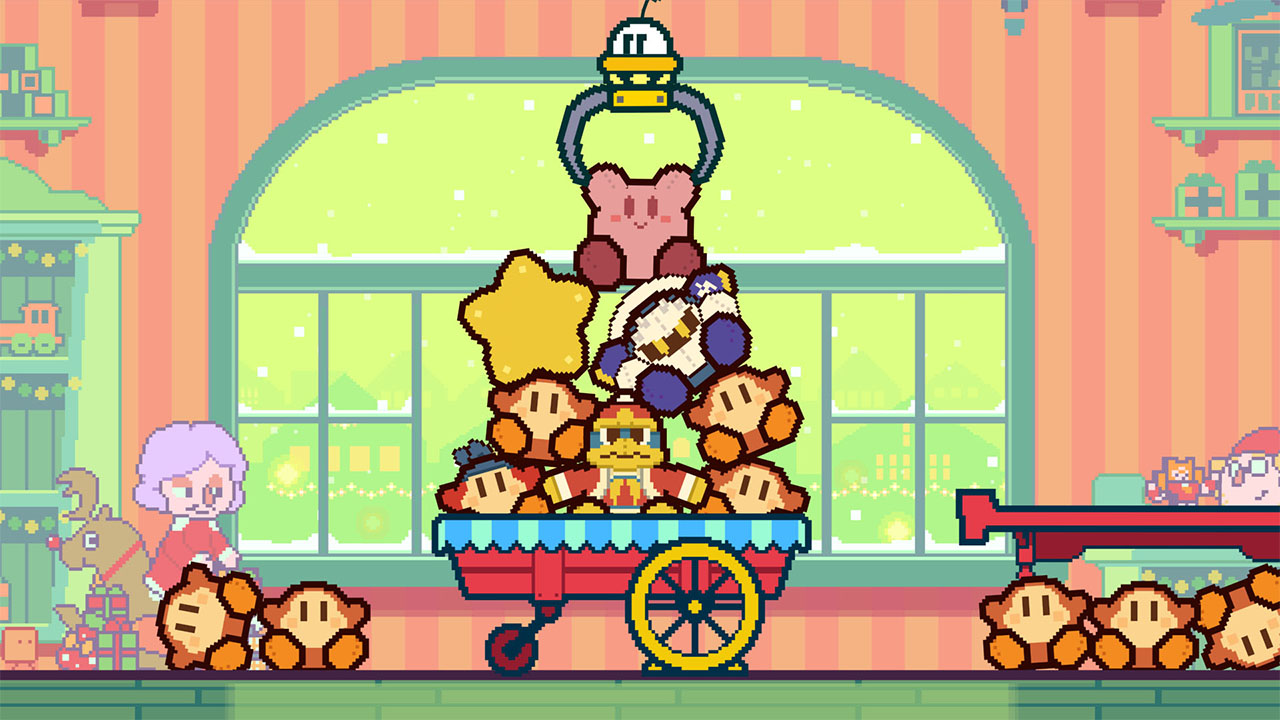 After you beat the game, you unlock what is known as the Tropical Island, which requires a ticket for you to access. You get one for completing the game, along with now having the ability to purchase them from the shop for 2,500 at anytime as well. The Tropical Island is very interesting, as it’s different from anything else in the game to that point in that you keep playing through these levels back to back to see how far you can get before time expires or you die via something like lava. There are these star shaped rocks found here that you can pick up and toss at yellow blocks to add time to the overall clock, while the main goal is to find the objects with keys located on them and take them all to the exit door and place them all there to continue onward. It could have gotten annoying having to buy a ticket every time you want to give it a go, but you will have so much money by the time you beat the game, as long as you don’t spend it all on costumes.

Costumes are one of the collectibles in the game that are obtained directly from the in-game store using the money you earn in each stage. These aren’t just cosmetics either, as they each give you special abilities, such as being able to move faster, pick up heavier objects with relative ease, and more. Costumes are something you can avoid entirely if you want, but they are nice to have there as something to work towards unlocking.

Part Time UFO also has its own form of an achievement like system known as the Feats of Glory. When you go to Feats of Glory, you’ll see a grid split into 12 large squares, with each of them having four smaller squares within them. Each of the smaller squares is one of the essentially achievements for you to complete while playing. When you complete a large block by getting all four achievements from within it, you will unlock a little moving picture that is basically a GIF. Even though the reward is pretty lackluster, it’s still achievements that will give players something to aim for to add some longevity to what is a fairly short game overall. 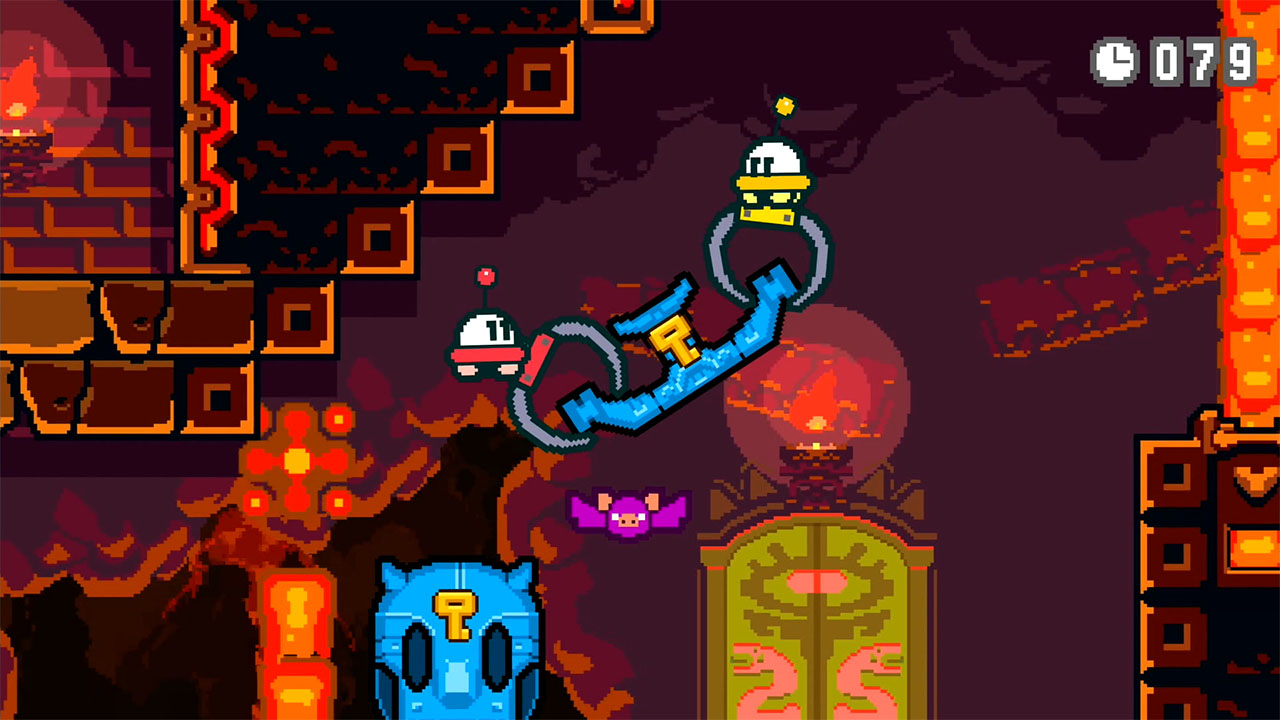 Not only can you play the game in single player like you could on mobile devices before, but the Nintendo Switch version adds in co-op play with the use of the Joy-Cons. Each of the two players grabs a Joy-Con and control their own UFO here as you try to work together. Sometimes this can make things easier when trying to pick up and place objects, but it can also lead to you getting in each other’s ways as well. This is definitely something fun for some nice local couch co-op with friends when you want to play something pretty unique.

After multiple years now of Kirby and BoxBoy games as the only HAL Laboratory games to grace Nintendo platforms, Part Time UFO was a nice change of pace with this new port. The game still may feel like a mobile game at its core with its design, but it actually plays even better on the Nintendo Switch. Part Time UFO is a great fit on the Switch due to the pick up and play nature of the levels, while also really creeping up the difficulty in the post-game for those looking for something a bit more challenging.

For those expecting a Kirby-like platformer experience due to the game being from HAL Laboratory, you will likely be disappointed. Instead, Part Time UFO feels more like a series of wacky extended WarioWare type levels that will keep you addicted as you strive to earn every medal in the game.