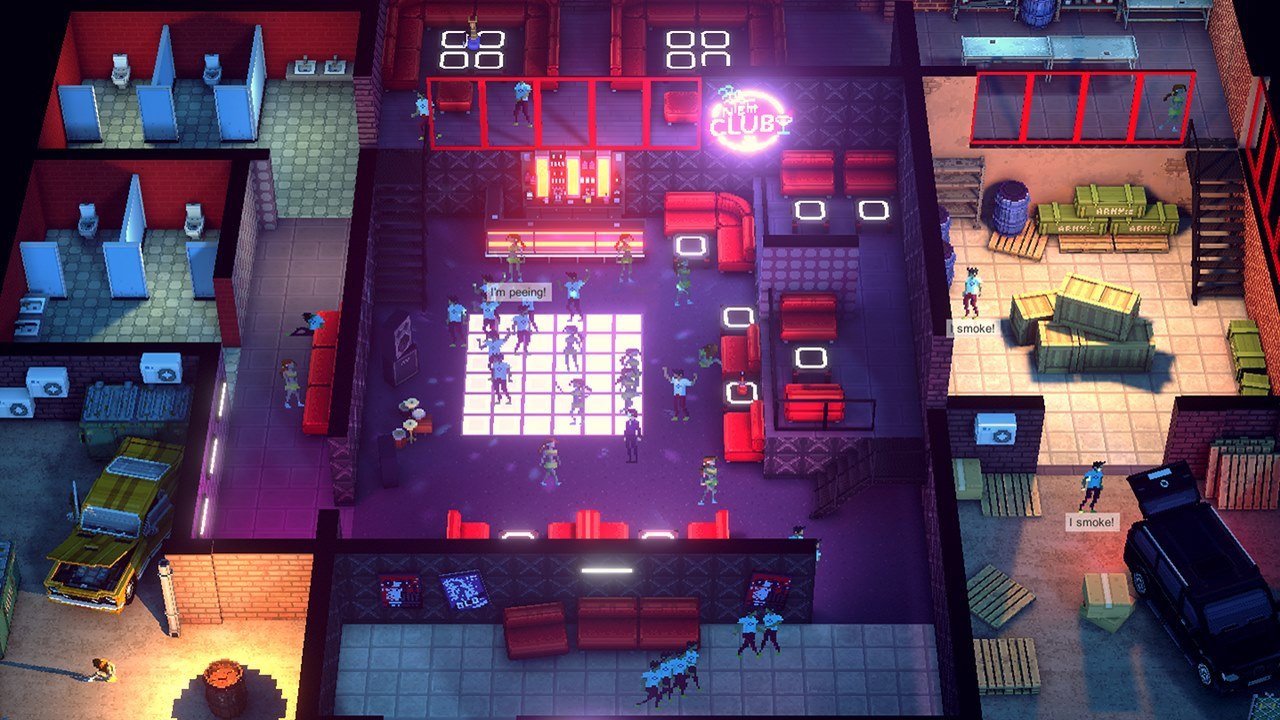 Have you ever been at a party and just wanted to murder everyone? We all have, right? Right?! Well, even if you haven’t felt that way it’s clear that those of us with murderous intentions aren’t totally alone as we’ve now gotten not just one game where we get to live out this fantasy, but a brand new sequel as well. Party Hard 2 takes the fun but rough experience of the first game and massages it into something new. A fresh art style mixes with improved gameplay and tons of new features to craft a better game in almost every way. Whether that’s enough depends on your answer to the question above.

Party Hard 2 frames its story as a sort of retrospective on the player’s actions. Flashing between present day and the events of the story, you hear about the various parties and other events you’re going to before you even arrive. This gives you an idea of what to expect, though the randomness of each level makes every attempt unique in some way. The story itself is pretty bare bones and its finer points aren’t too easy to follow without spending some mental effort that it’s not really worth. This is made worse by the poor voice acting and low quality cutscenes, but the story still comes though. You want to kill a bunch of people, you keep ending up at massive parties. The rest is self explanatory. 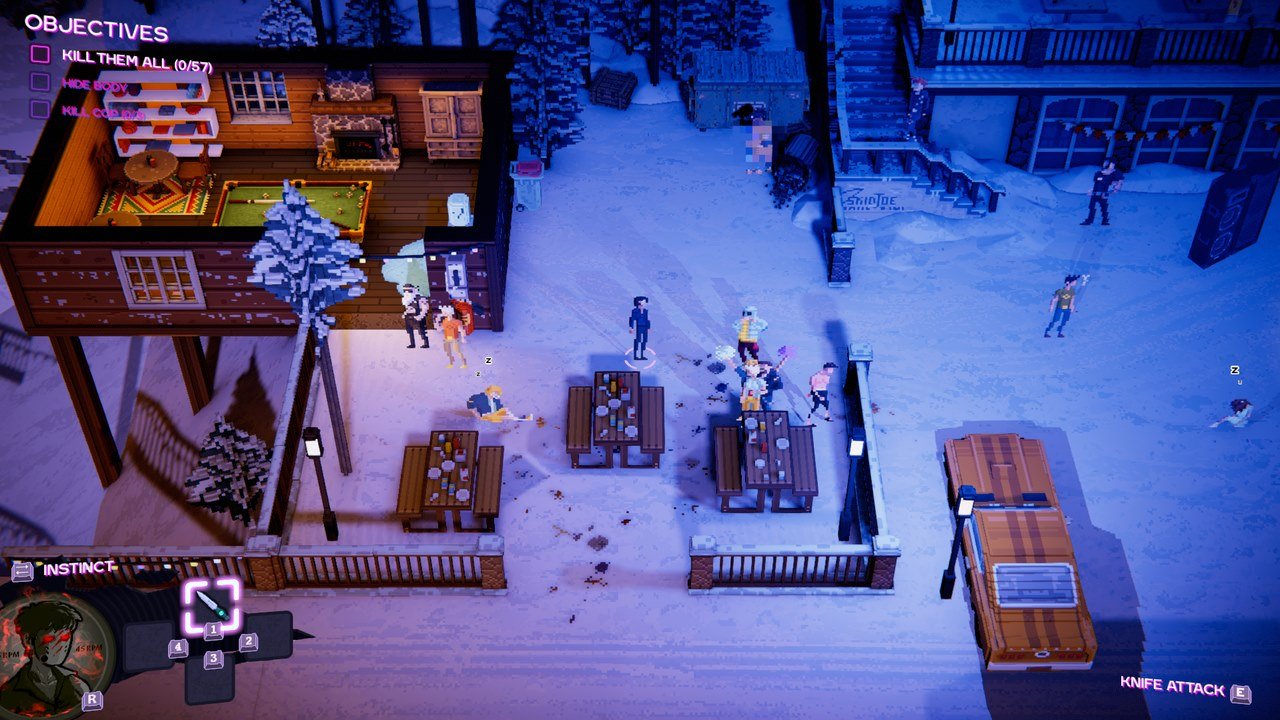 At least, it’s pretty self explanatory. You see, Party Hard 2 adds a lot to the simple formula found in the first game. There you almost always had to kill everyone at the party, whereas now you can have specific goals. Often you will have two different sets of goals, including killing everyone at the party. Sometimes you just need to kill specific people, while others involve finding objects, or performing different tasks.

This is another place where Party Hard 2 improves things, with Party Vision always just a button press away.

These tasks involve the more fleshed out gameplay elements that Party Hard 2 adds, such as ultimate abilities for each character (all but one are locked to start), crafting, and more robust interactions with NPCs. In the previous game, if you wanted an NPC to move you mostly just had to wait and hope, but now you have a ton of options available. Let’s say you have two targets spread across a single room with multiple witnesses you have to either eliminate or avoid. You can lure them with objects, such as money or a boombox, then either eliminate them stealthily or by getting them positioned near one of the many traps spread around each level. You can also combine a gas can with a beer bottle to make a molotov, then chuck it into the very flammable room. Figuring out what you can do is almost a bigger challenge than actually killing your targets.

Thankfully this is another place where Party Hard 2 improves things, with Party Vision always just a button press away. This new ability highlights targets, shortcuts, and potential traps or items of interest. Given the randomized nature of every game of Party Hard 2, this addition is particularly helpful, as it directs you to things you might have overlooked without it. The levels also seem a bit less random than before. Whereas you used to start things almost totally fresh each game, this time you can learn a bit about character patterns and other pieces of the map.

Speaking of the maps in Party Hard 2, they are huge. Compared to what was seen in the first game, these things are massive, with lots of interesting things to mess with. In one of the early campaign missions I triggered a trap which ended up blowing up a huge van nearby, killing tons of my targets and giving me many more options for future playthroughs. Shortcuts help you get around, teleporting you from one corner to another. They also help you get away from pursuing police if you are caught, offering some nice strategies for what could have been an instant fail. 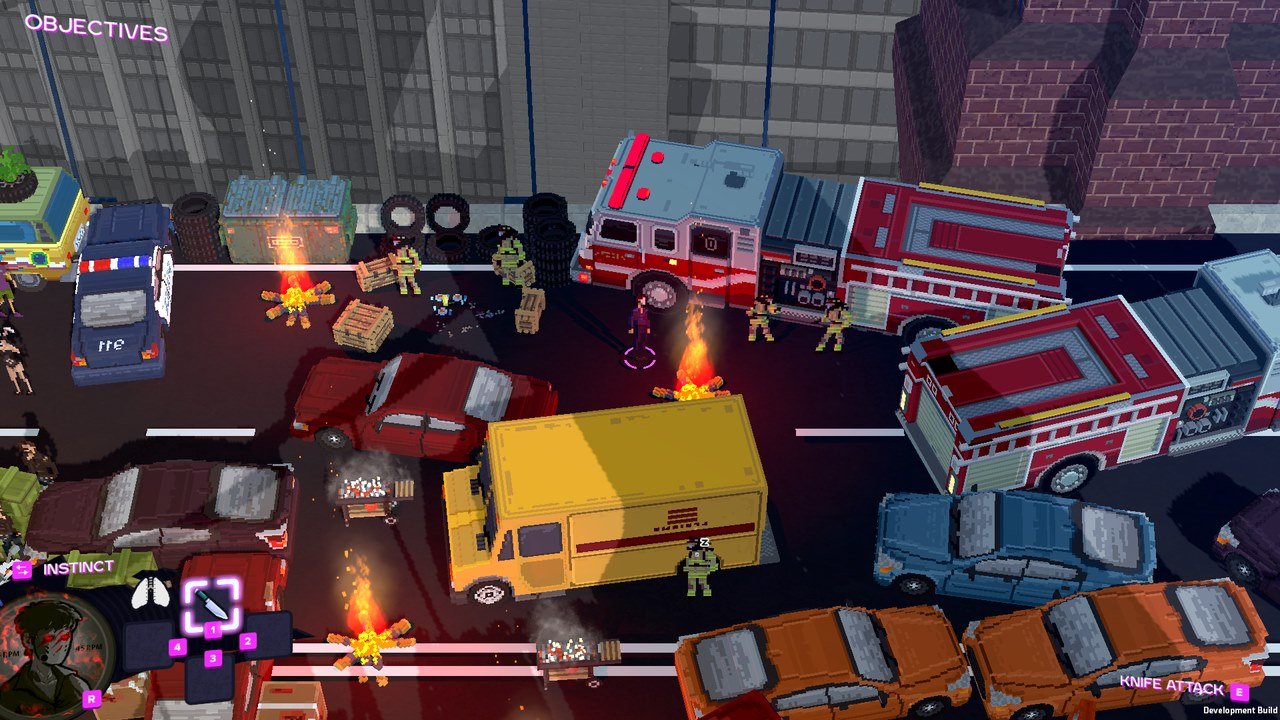 Failure is still a big piece of Party Hard 2’s puzzle though. You will lose, often. This game is tough and isn’t too interested in making things easier for you. The objectives have been streamlined and that’s a huge help, but even with that you will still struggle to beat some levels, even after multiple tries. That’s how the game is structured though, and restarts are quick and easy. Of course, if they come after 15 minutes or more of meticulous murder, falling apart due to some random happenstance, it is still immensely frustrating. Fans know to expect that, but if you’re jumping in on this sequel you should know to be prepared for some anger sessions. Thankfully if things get too tough you can bring a friend into the co-op mode and slaughter away.

All of this takes awhile to fully understand as you play through Party Hard 2, but what strikes you right out of the gate are the unique visuals. Retaining the style of the original while still representing a big shift in style and quality, this mixture of 2D 8-bit art and 3D graphics is a very nice touch for this burgeoning series. There’s also a brand new soundtrack to enjoy, with some truly catchy beats. Playing through these levels never gets too annoying as you bob your head to these new tunes.

Party Hard 2 does what all sequels should. It keeps what worked, cuts or changes what didn’t, and adds some new stuff to keep things interesting. The first game had a unique gameplay style that made it worth playing despite its many issues. Party Hard 2 removes a lot of those issues. It’s still not a perfect game, and its gameplay won’t work for everyone. You have to have a certain compulsion for perfection to get the most out of the game. If you have that predilection, or if you liked the first title, then Party Hard 2 will be a treat. Those who regularly break controllers should probably sit this party out though.